I feel like we literally just attended Miriam's class concert, but I suppose it was about six months ago. Still, after performing that late into the school year it feels rather sudden to be the first musical performance of the year!

This year the title of their little musical was Off Their Rockers. It was set in a nursing home; a group of young performers is determined to get the tired, bored residents up and rocking by serenading them with some hits from the 1950s. The kids were dressed either as old people or in 1950s attire.

We put Miriam's costume together earlier this week and she looked darling! 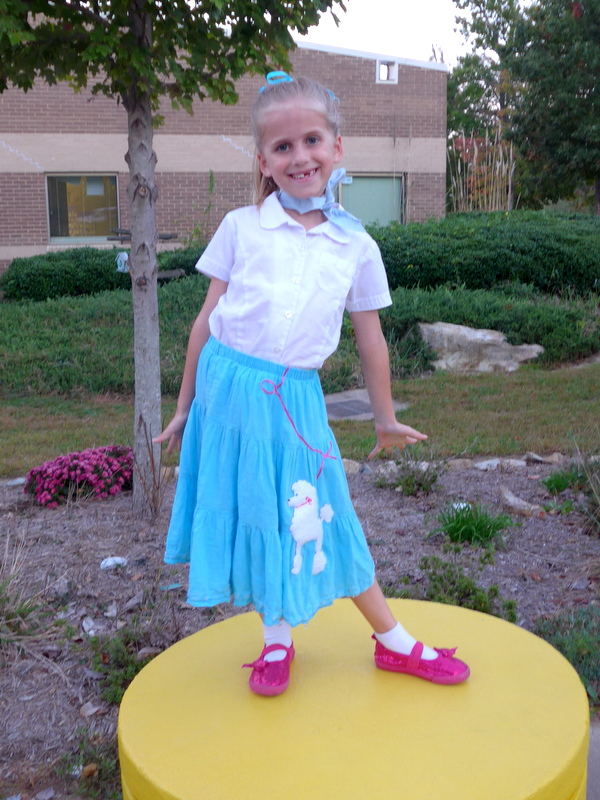 We turned an old raggedy skirt into a poodle skirt for her. This poor skirt was given to us by a friend whose two daughters had each loved it well in turn; then Rachel spent a few years wearing it and Miriam has had it for about a year now. She last wore it on our trip to DC and somehow managed to rip the inside liner quite completely (and that's not even the only hole in the skirt). There are splashes of paint on it as well, and the beads on the hemline are hit and miss. Now that it's more hole than skirt it's probably not suited for everyday wear anymore...but it made an excellent base for a poodle skirt (and will probably find its way into the dress-up box).

I found myself wondering, as I was stitching that little felt poodle onto her skirt, if poodle skirts were really that popular, so I looked them up. And they really were quite popular. The creator, Juli Lynne Charlot, like me, couldn't really sew so I'm sure she totally understands why I only put an appliqué poodle and didn't actually make the skirt (though the whole idea behind the design was that there were no seams—because it's a circle skirt (I didn't have enough felt for that though)).

And how fun that Ms. Charlot's birthday is October 26—the day after Miriam's birthday!

Miriam thought that was pretty cool.

This morning I was helping out in Miriam's classroom (I'm tutoring her little friend Eileen (who only speaks Chinese at home) in English (mostly pronunciation); it's been fun to pull out all the TESOL/linguistics information I have stored in the dark, dank corners of my brain) and since I had Benjamin with me I decided we could stay for recess. He loves recess and immediately started running around with a pack of kids without hesitating one bit.

He only came up to me once to ask if his nose was bleeding: 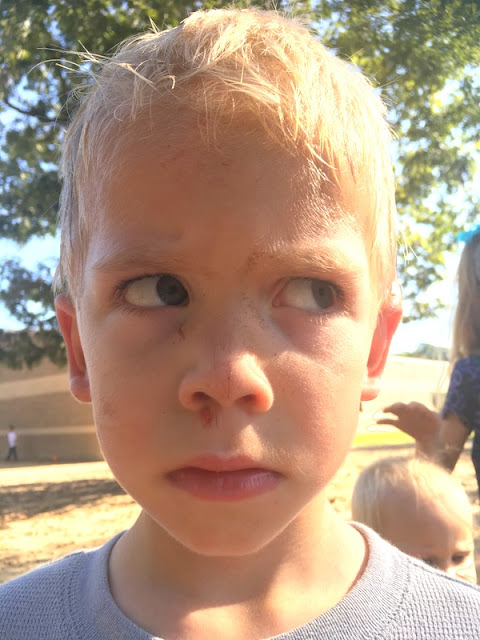 "A little bit," I said, amazed that he wasn't screaming. "But I think you're going to be fine. What even happened? Did you face plant?"

"Yeah," he said. "I really planted my face right into the ground."

You know that trope where there are a bunch of marbles on the floor and a character steps onto the mess and starts slipping and flailing about before they finally fall? Apparently that's what Benjamin did under the big oak tree on the playground, only instead of marbles it was acorns and instead of a floor it was packed dirt. He was running at full speed when he hit the acorns, slipped, and landed right on his nose.

There are seriously so many acorns under that tree! It's no wonder he fell.

And it's actually kind of funny when you think about it. Though I do feel very sad that my little boy got hurt I wish I could have seen it because it sounds like something that only ever happens in the movies.

Oh, and later in the day Zoë fell off the bench at the table (again) and landed on her face, so now both of them are all banged up (that's not blush on her cheek in the picture; it's a bruise): 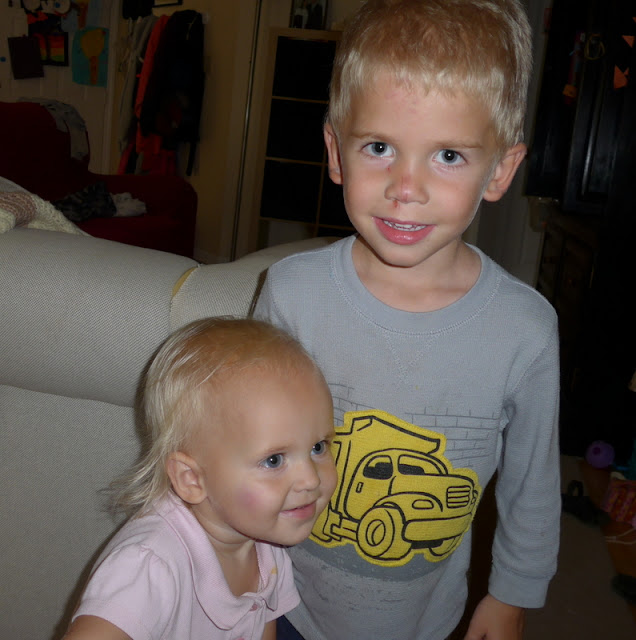 It was so weird!

"What's going on?" I wondered to myself.

And then—when I saw a little girl running around in a pink poodle skirt—I realized that they were all dressed up as greasers for their 1950s-themed performance! Because their costume was so inconspicuous I guess they all decided to just wear it all day. The girls, on the other hand, mostly chose to change into their costumes later in the day (they performed for the school in the afternoon and for the parents in the evening).

The performance was very cute. Miriam had tried out to be a soloist but didn't get a part, which was a little disappointing for her. When she came home and forlornly announced, "I didn't get a solo," she was surprised when I said, "That's alright! I'm just proud of you for learning the solos and trying out. You did your best, but not everyone can get a solo and they need people in the chorus, too, so just keep doing your best!"

"I don't know," she said. "You just seemed like you really wanted me to get a solo."

"I did really want you to get a solo...because I thought you really wanted a solo."

"I did really want a solo," she confirmed.

"Well, then that's what I wanted for you, but it's okay that it didn't work out that way."

Here she is when she first spotted us: 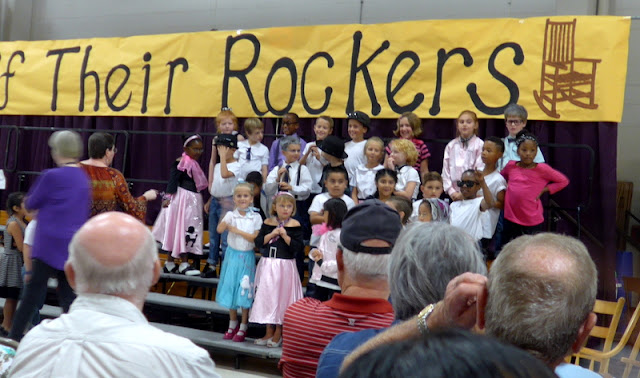 She did great in the chorus. I could tell she knew all the words. And she enunciated her line beautifully: You know what they say—'no pain, no gain!' There were certainly times she could have been a little more animated, but for the most part she sang out loud and proud. 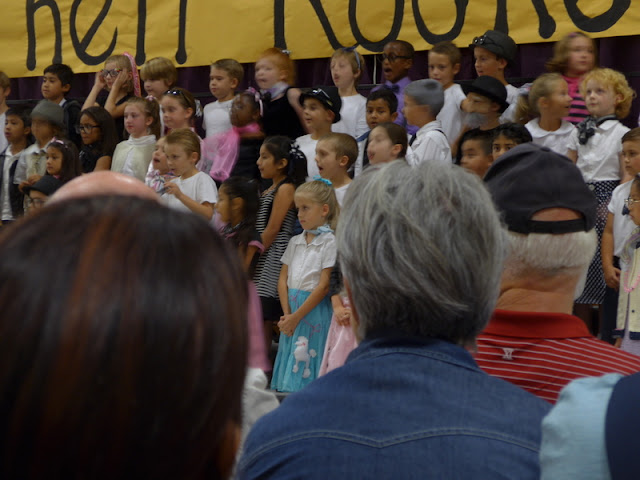 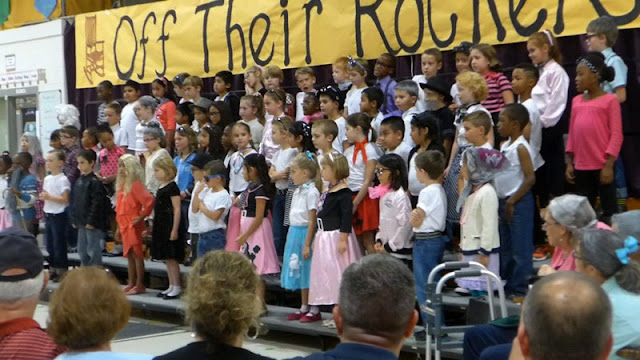 The last song was her favourite (I could tell). That's when the teachers, who'd dressed up as if they were very, very old, got up to dance around to the children's music. 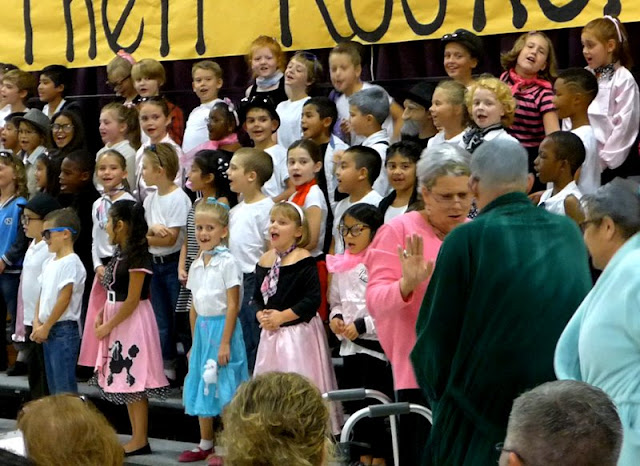 Here's Miriam with her buddy Parker in their classroom after the show: 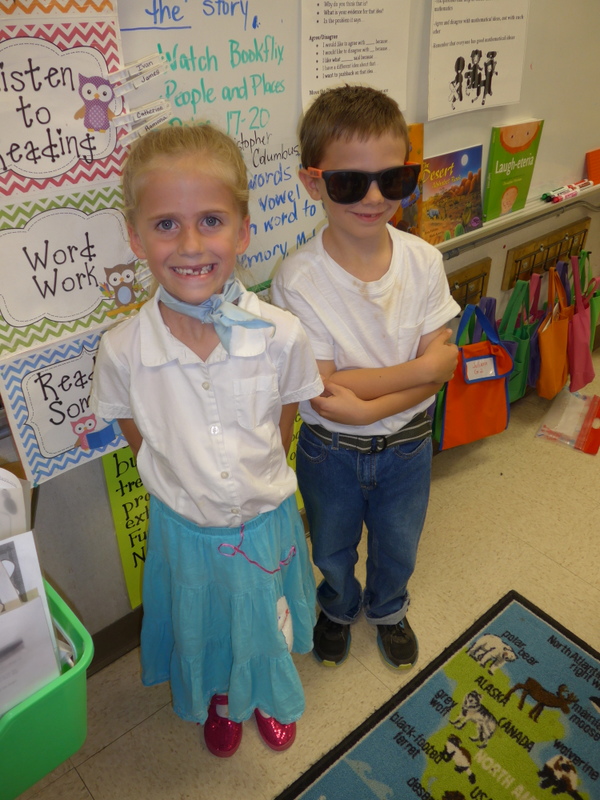