In which Zoë is spooked

The kids love sneaking into Grandpa's office to watch YouTube videos. He's gracious about it and unless he's really tied up will let them hang out for a video or two before kicking them out (he works from home). No matter what I try to convince them not to bug Grandpa, I usually end up dragging them out (sometimes kicking and screaming) at least once a day.

This little tradition really started back when we lived with Reid and Karen before—when there was only Rachel and Miriam. Grandpa had a few videos he liked to show them and, well, those are the same videos he shows to Benjamin and Zoë: The Duck Song (which the kids like to sing behind my back right now, as I tend to "waddle away") and some Sesame Street videos.

When he introduced Feist's Sesame Street appearance to Zoë he told her that it was Mommy singing and she 100% believed him.

So now she calls it the "Mommy Song" and she loves it. She wants to watch it all the time. She wants everyone to sing it to her. And she often can be found singing it to herself.


Obviously she doesn't quite have the lyrics down, but she loves to sway back and forth like Feist Mommy does in the video when she sings.

Grandma showed the kids a scary spider video, which spooked them a little bit. Benjamin screamed and ran across the room, but Zoë didn't really do much. It was a spider. Whatever.

So Grandpa decided to one-up that video by showing the kids this:

Benjamin was scared out of his wits. Zoë completely broke.

When I came downstairs to find them (about fifteen minutes after the watching of the video) she was still muttering to Grandma about the "Zombie Song."

It's like she was experiencing—or at least describing—fear for the first time. Evidently she was scared to the very pit of her stomach.

She carried on like this for at least an hour, sticking close to either Grandma or me and cuddling while whimpering about the Zombie Song. Later she loosened up a bit and would, dare I say, joke, "Bombie 'ong—RAWR!" bringing her hands up into a little set of claws, so I think she'll recover from her scare.

In happier Halloween news, we went to pick up a Halloween costume for Zoë from someone in the ward. She enjoys dressing up regularly but hasn't really caught onto the idea of being something for Halloween. When she saw this, though, it was love at first sight. She wanted to put it on right away and probably would have slept in it (and desperately wanted to sleep in it) if it wasn't so ridiculously hot this evening. Our house is sweltering, even with the windows open and this is definitely a winter-weather costume. There were several tantrums but we finally managed to get her into bed in some cooler pyjamas (though she's planning on slipping into this first thing in the morning): 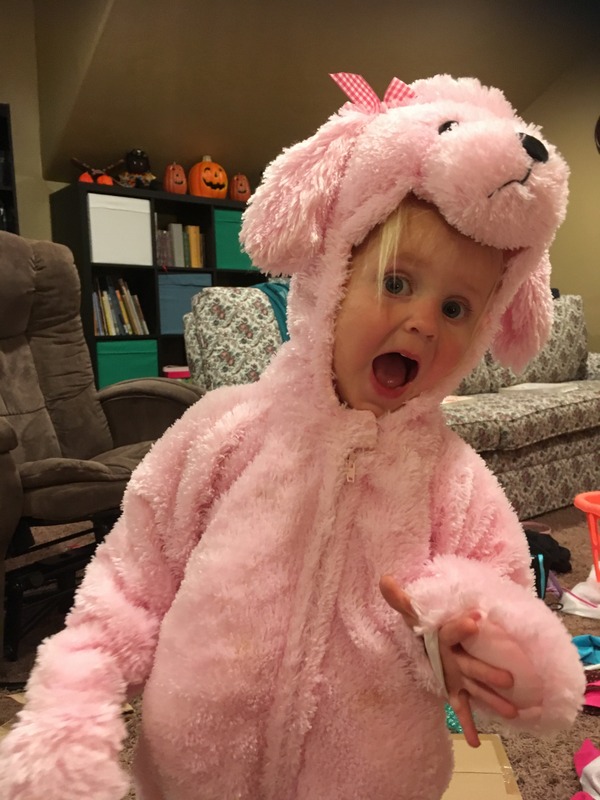