Alexander has had a busy week getting to know his relatives! They started popping by the hospital Saturday morning at around 8:00 (when he was just 6 hours old) and there's been a steady stream of them ever since—and there's still more to meet! We haven't been the best at getting pictures of everyone but...we're a little outnumbered over here, so...anyway...

While not our first visitors in the hospital, all these little ones were perhaps the most excited and important visitors: 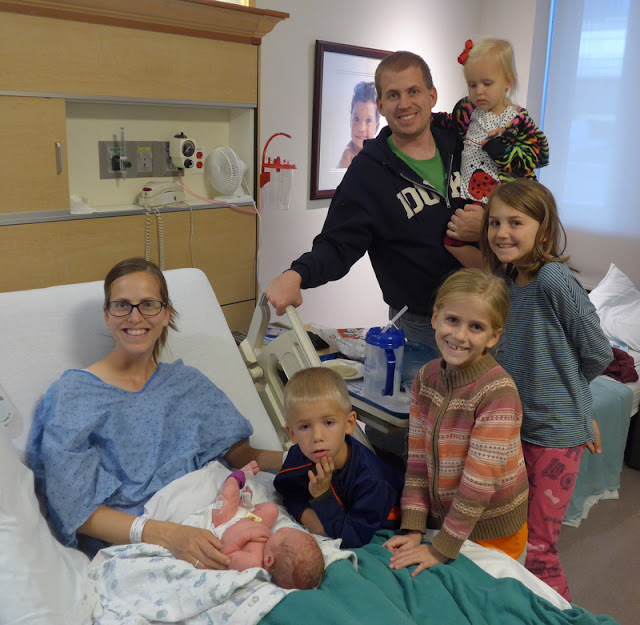 Benjamin has a surprising memory and was equally excited about holding his brother and about visiting the snack room. Andrew and I were both taken aback when he handed Alexander back to Andrew kind of pushed Alexander off his lap and said, "Now can we go get some snacks like we did when Zoë was born?" 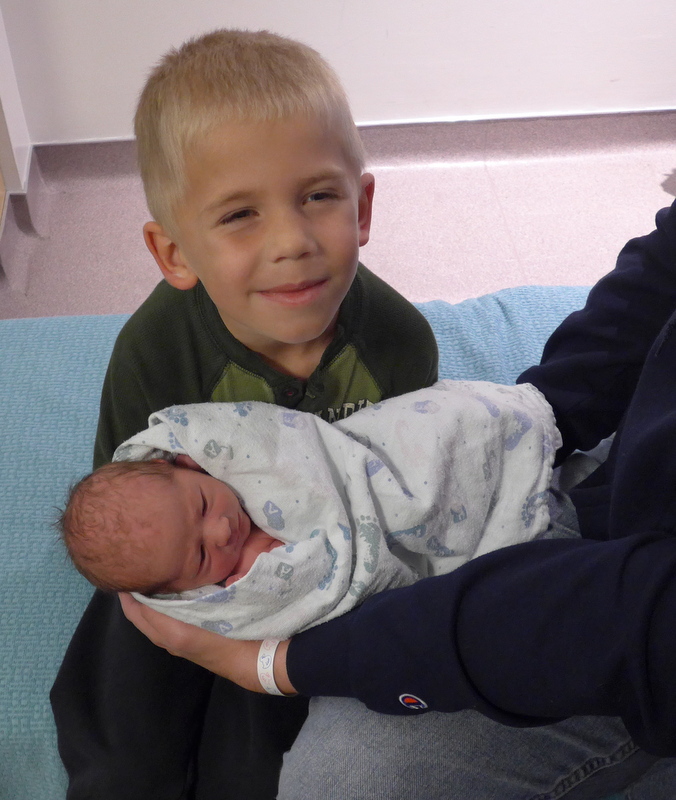 So they did: Lora Doone Shortbread Cookies and Oreos for everyone!

Benjamin was a little disappointed  that Alexander didn't surprise us by coming out a girl (he had held out hope for another sister to the very end, I guess) but has since warmed up to the idea of having a brother, I think. Full disclosure: Benjamin just stepped on him (like right on him, like trod on the poor baby's chest) but Benjamin tearfully assures me that it was an accident and I'm sure it was but, like, getting any sort of floor time around here is going to be...difficult.

I knew it would be this way going into it. I mean, just look at my face as I'm explaining to Benjamin and Zoë how not to love their brother too hard: 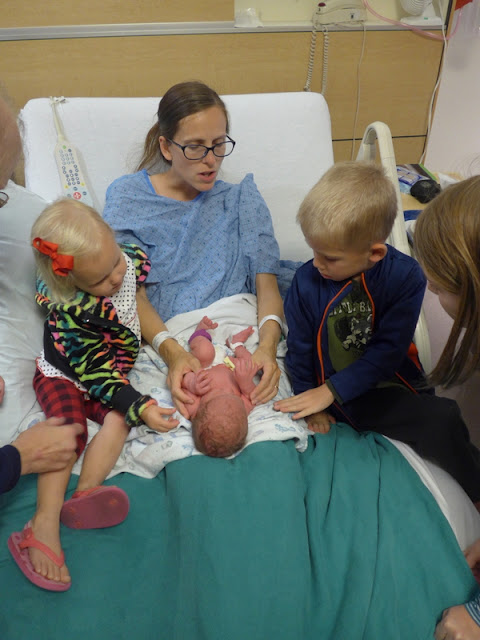 When my mom stopped by the hospital she wondered why Alexander ended up being so tiny because he could have used some substantial girth to survive being Number Five. He's my second smallest baby (Benjamin was the smallest, of course) but he's actually the smallest baby we've taken home from the hospital.

Benjamin was 6 lbs. 4.5 oz. when we finally strapped him into his car seat to head home.

Alexander was only 6 lbs. 3 oz. when we took him home. So, by a whole 1.5 ounces, Alexander is officially the smallest baby we've taken home. And I'm not going to put him down ever again until he has a strong right hook. Poor tiny thing! 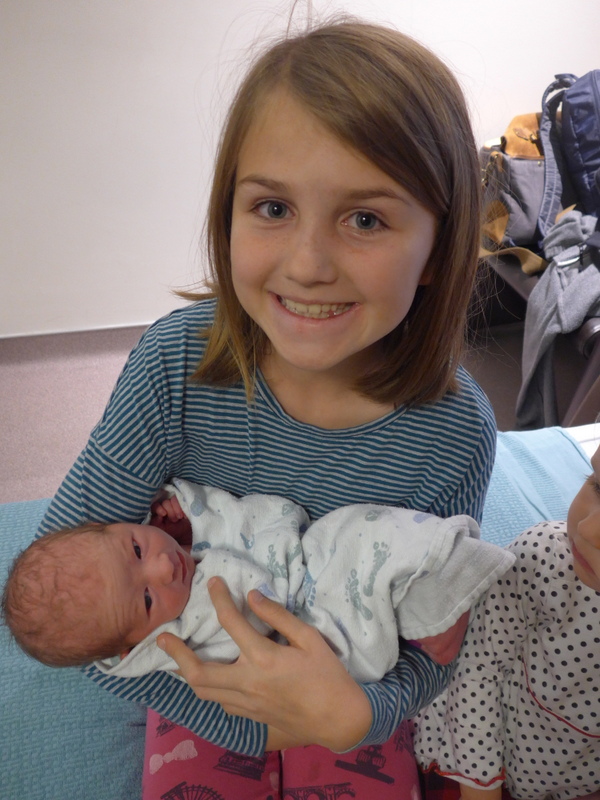 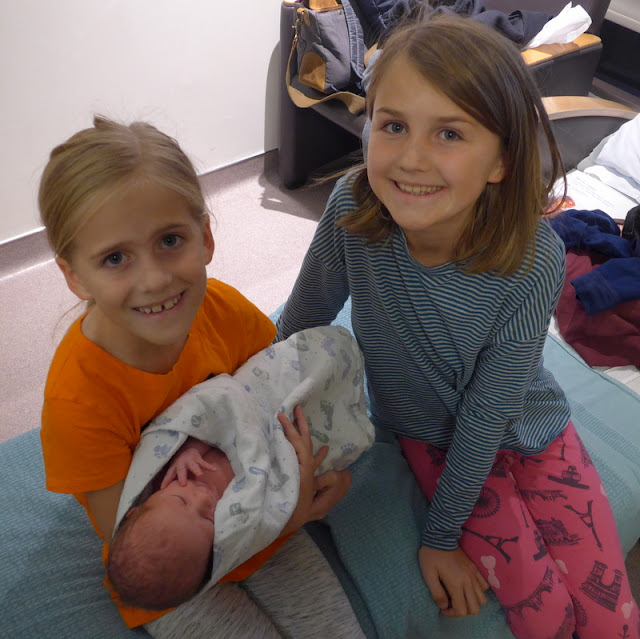 They couldn't get enough of him, especially this little suddenly seemingly monstrously huge thing: 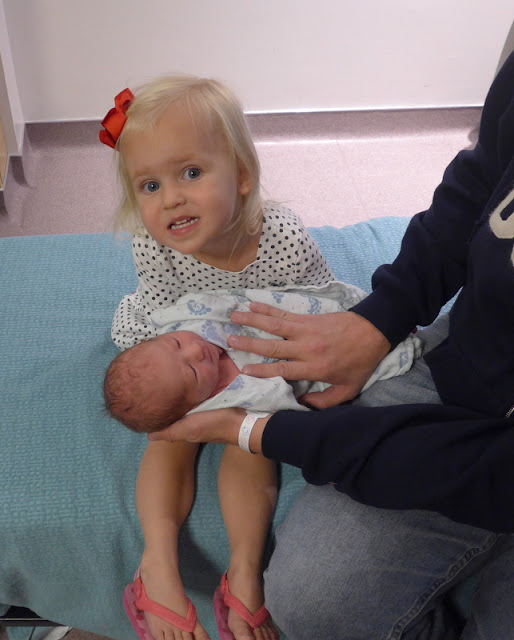 Zoë is absolutely smitten with Alexander. She immediately claimed them as hers ("My Xander!") and is always demanding to hold him. When I went out on Saturday night to a cousin's bridal shower, Zoë said, "Take my baby, no, Mommy! No take my baby!" I took her my baby anyway. She's pretty sure he's her personal plaything. Which is another reason I'll be carrying him around until he's fifteen (or at least until he's old enough to run away from her).

We also had some grandparents and aunts and uncles visit at the hospital.

Here's Bumpa getting in some precious newborn snuggles: 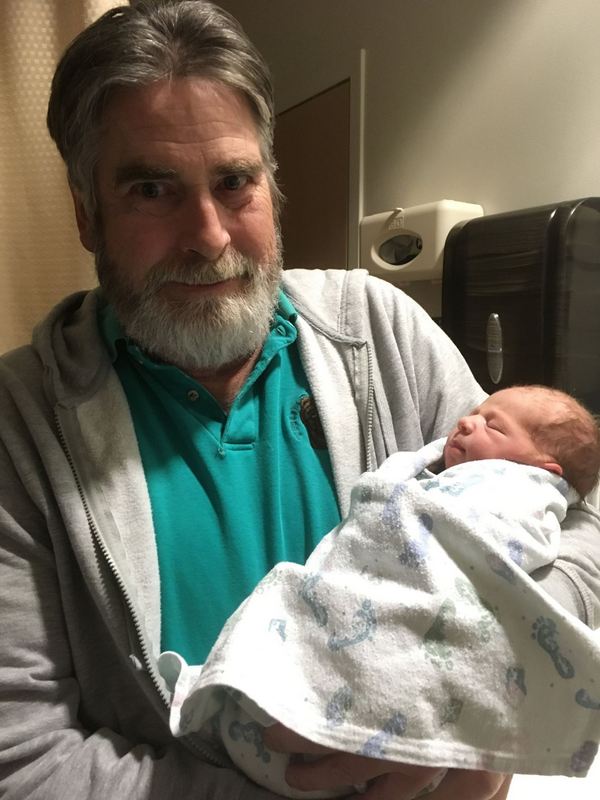 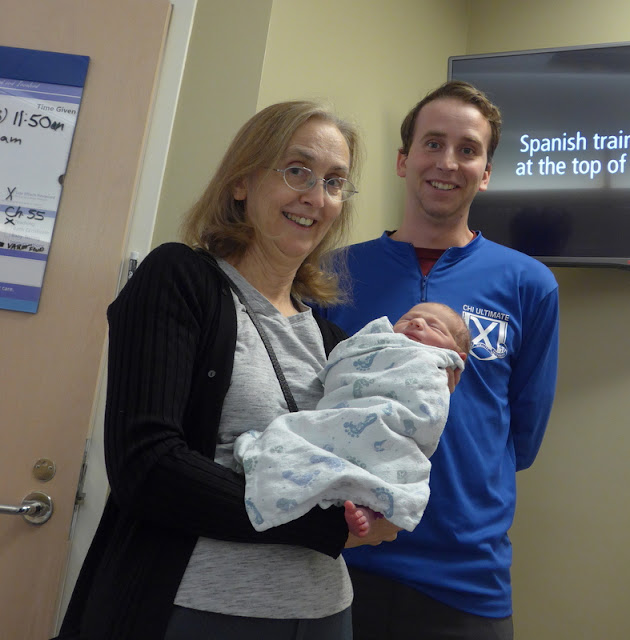 Naanii visited three times on Saturday. Once in the morning with Bumpa, once in the afternoon with Auntie Josie (it was supposed to be in the morning but they had to wait for some random 5K at BYU to finish that had closed down Josie's street (the Sugar Rush (the same race I was supposed to be "running")), and in the early evening with Uncle Patrick.

Here's Josie with the baby: 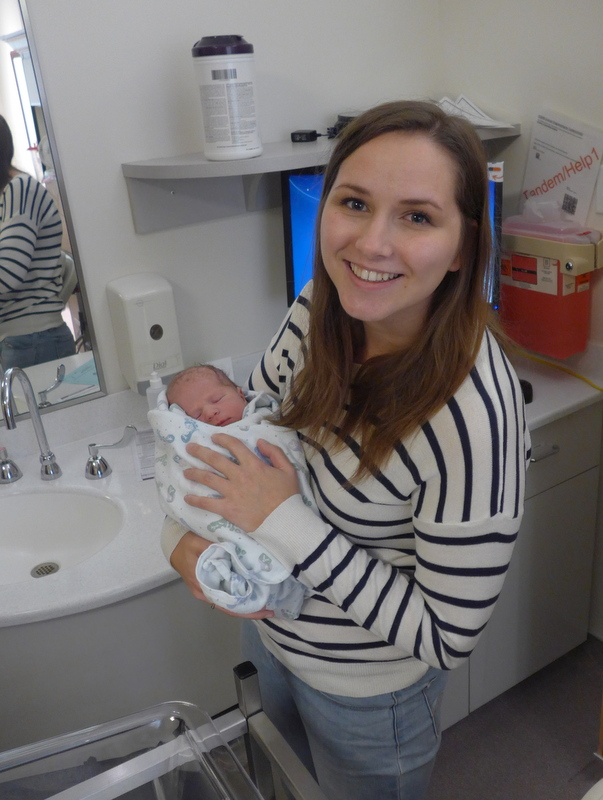 And here's Grandma sneaking in some time with Alexander (after helping all his siblings take a turn with him): 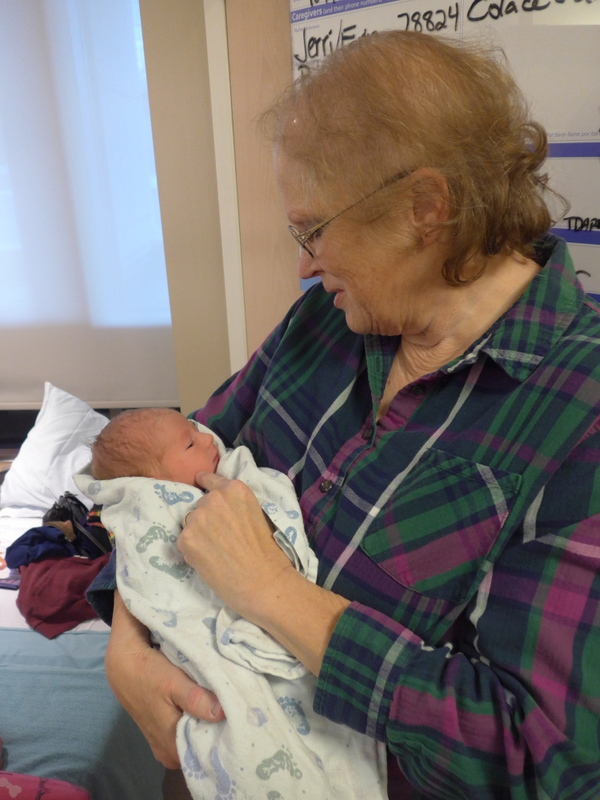 And here's a picture we snapped of Andrew when we realized we hadn't gotten one of those yet: 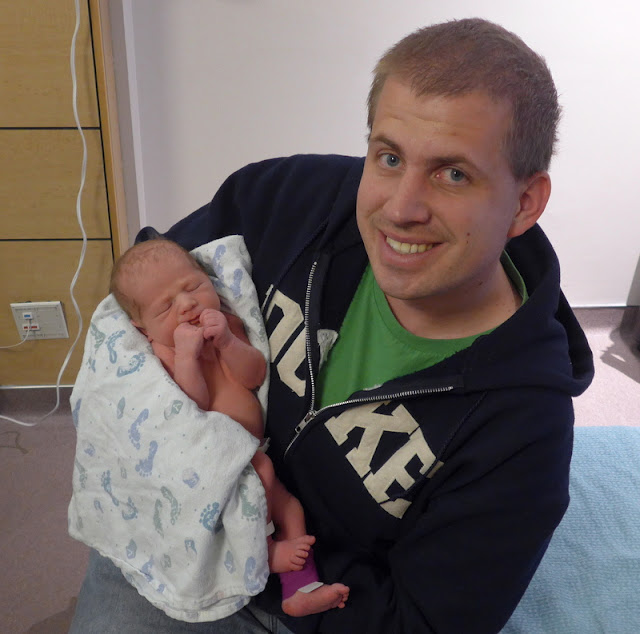 We didn't stay at the hospital very long, considering I was GSB+ and didn't have time for antibiotics before Alexander was born. Typically they want to observe the baby for 48 hours, just to be on the safe side. We did the full 48 hours when Zoë was born. But with Alexander I was walking out (technically I was wheeled out) of the hospital by 11:00 on Sunday morning. That's only 33 hours but it was plenty long enough of a stay for me.

Between my nurse, the nursery staff, the paediatrician, my OB, various technicians, and the cleaning staff, my door was practically a revolving door. Alexander had to have his blood sugar level tested before every feeding, which made nursing difficult because by the time the nurse/technician made it in to check his levels he was either completely worked up or back to sleep.

His first blood sugar was 43 mg/dL and my nurse gave me a lecture about how it had to stay above 40 mg/dL or he'd be admitted to the NICU, which totally freaked me out. I mean, a NICU stay isn't the end of the world...but it's also not ideal. So I basically just didn't sleep after he was born because I was so stressed out about getting him to nurse. Fortunately his numbers continued to climb, first to the fifties and then to the sixties, when my nurses were finally satisfied.

43 sounds super low though! I had no idea what newborn numbers should be (evidently anything less than 30 mg/dL for the first 24 hours so I don't know why they were worried about a 43). I mean, 43 mg/dL would not be ideal for an adult...

Anyway, once his blood sugar levels were in the clear they seemed pretty antsy to get me out of there (despite also wanting me to stay for as close to 48 hours as possible). And so, at 11:00 they discharged us and sent us on our way. And I was totally fine with this because it meant I could crawl into my own bed and no one would barge in to check my blood pressure or ask me if I've managed to pass a stool yet or ask how nursing is going.

Seriously, all the young nurses asking me about how nursing was going made me feel old and crotchety. I would assure every one of them that things were going just fine while thinking to myself, "This is my fifth baby. I have eight years of nursing experience under my belt (and have experienced everything from mastitis to boils, from inverted nipples to nursing strikes, from tongue-ties and milk blisters to feeding a preemie and nursing while pregnant (which is something I never planned to do, but motherhood has made me do a lot of things I never planned to do)) and you're, like, what? 20?!"

Half the nurses I saw were students, I swear. And that's fine. But, like, stop doling out lactation advice and just let me sleep already!

That makes me sound like a bit of a snot but I had just had a baby and had been up since around 7:00 on Friday, so by mid-morning on Saturday when I still hadn't been able to sleep I was starting to feel a little irritable and wanted nothing more than for people to stop barging in on me (that little "do not disturb" sign doesn't actually stop nurses from coming into your room).

So, yes. I was rather excited to get home. Karen and Reid had taken the kids up to their old ward for a mission homecoming and then they'd gone to the airport to drop Reid off for a business trip. They arrived home shortly after we did and Karen seemed rather relieved. Having just taken four kids to sacrament meeting she wasn't entirely looking forward to repeating the experience in our own ward.

Instead the kids stayed home and took turns holding their baby brother (and visiting with Auntie Kelli and Uncle Allen) for an hour before Andrew ran them over to the church for primary. 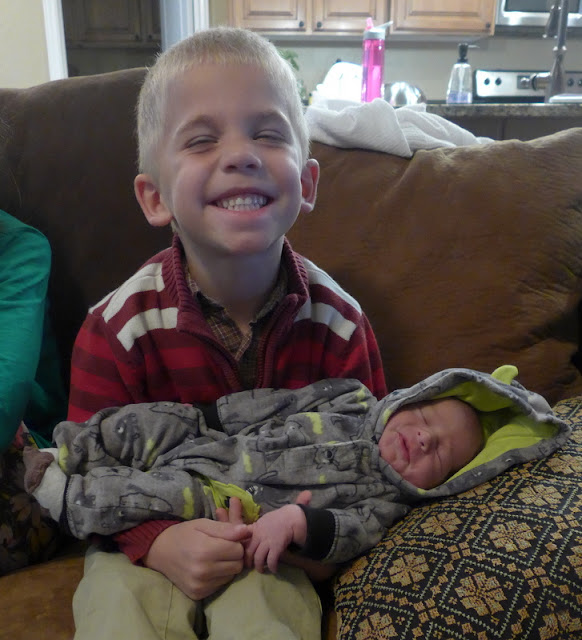 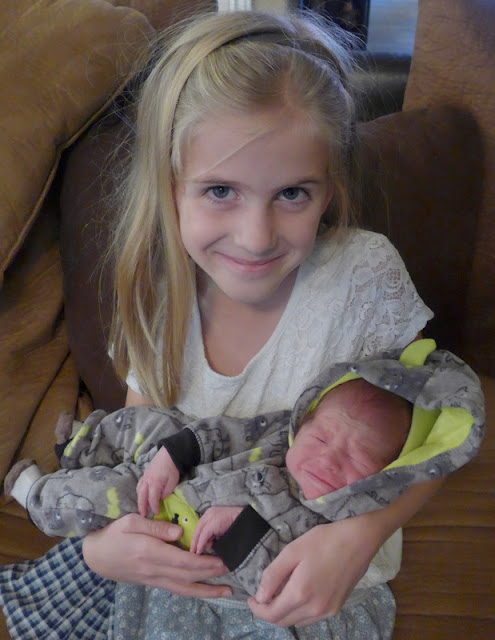 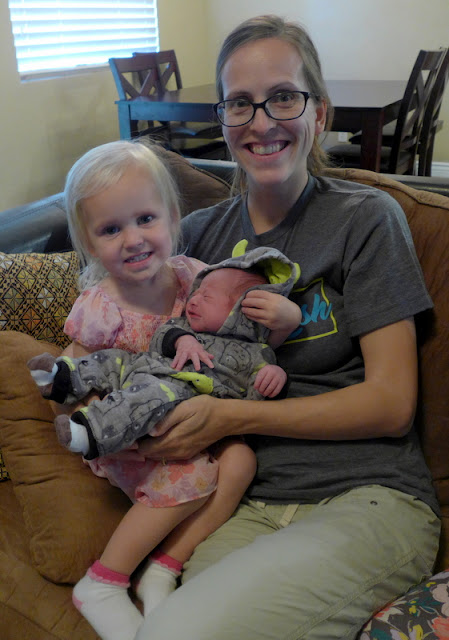 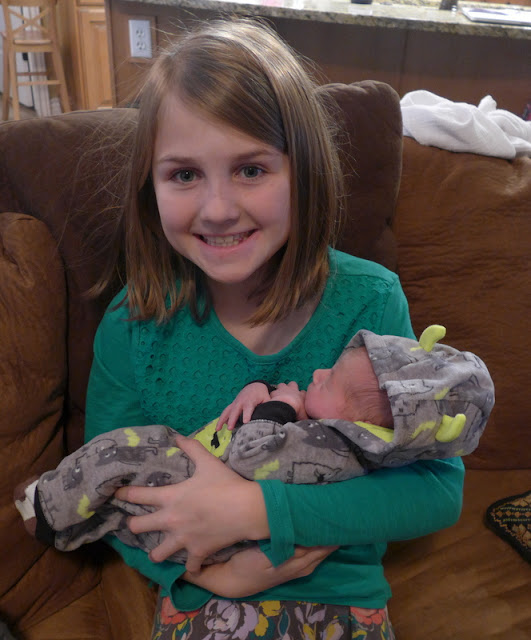 Auntie Kelli came bearing a sackful of gifts: clothes and diapers for the baby and some sidewalk chalk for the big kids. They were all super excited about everything. 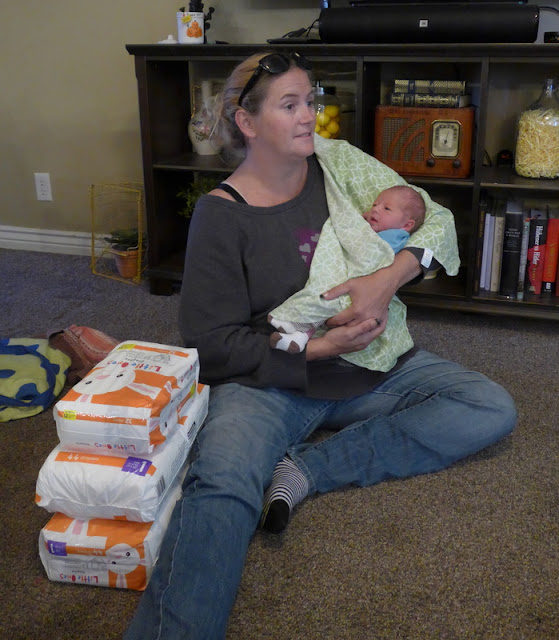 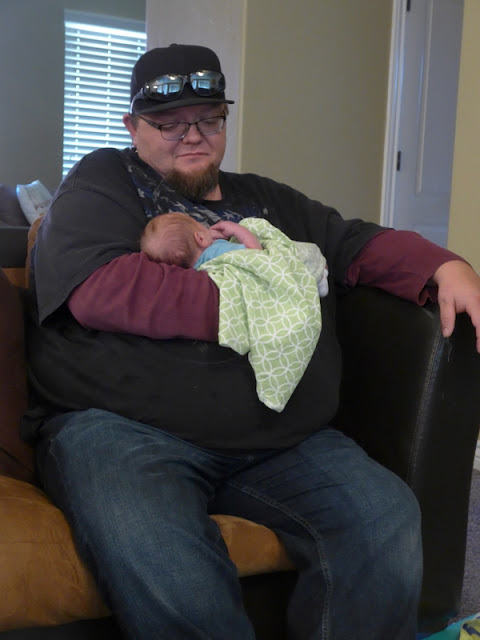 The kids had gone to a fire safety day in Provo on Saturday (on their way home from visiting us in the hospital) and we're now the proud owners of a few plastic firefighter hats. One of the kids (either Benjamin or Zoë) insisted that Auntie Kelli wear one. She's a good sport. 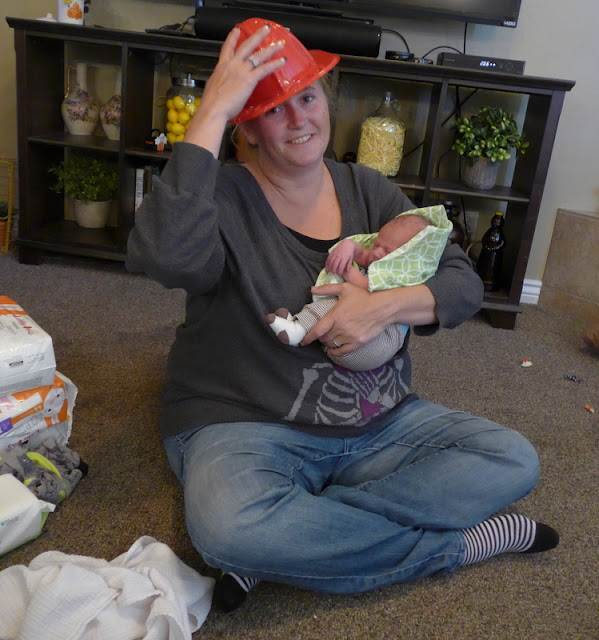 Uncle Jacob and Aunt Shayla stopped by after church to meet the baby. Carter wasn't entirely impressed by Alexander, but we were impressed by his newfound walking skills. When he saw his big cousins heading outside to play (with their new sidewalk chalk) he quickly got down on all fours and started crawling backwards so he could go down the stairs to join them. Unfortunately for him, he aimed poorly and ended up crawling (backwards) into the wall beside the door and then he just kept scooting backwards along the wall, trying to figure out why he wasn't getting where he wanted to be. Though Carter did not think so, the rest of us found it rather hilarious. 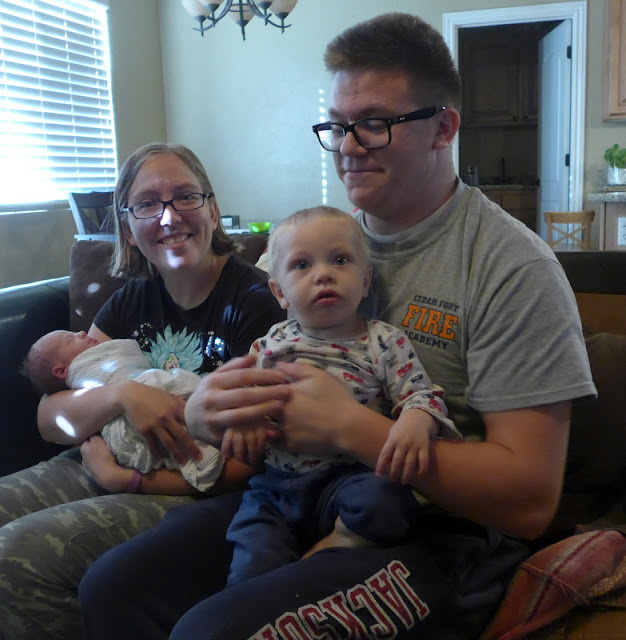 And now for some random pictures of family holding the baby after I lost track of who came on what days (I kept track for all of, uh, Sunday...so that's pretty good). Actually, I think this picture must be from Sunday as well. I think my mom and Josie came by as Jacob and Shayla were leaving... 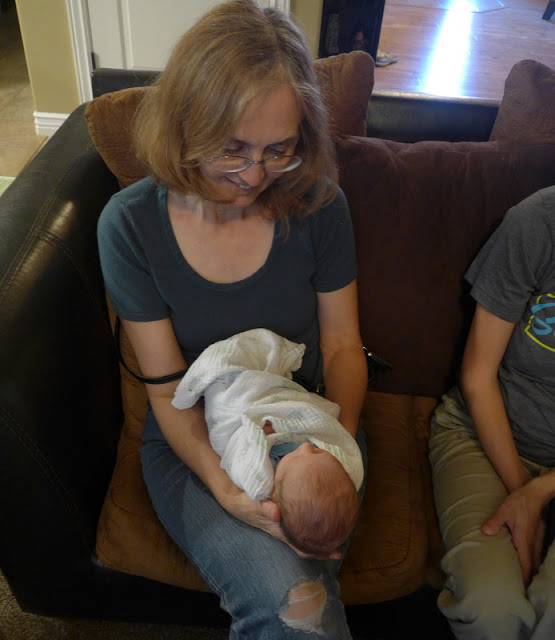 Here's Grandma getting some cuddle time in with the wee ones (probably while Benjamin was at kindergarten): 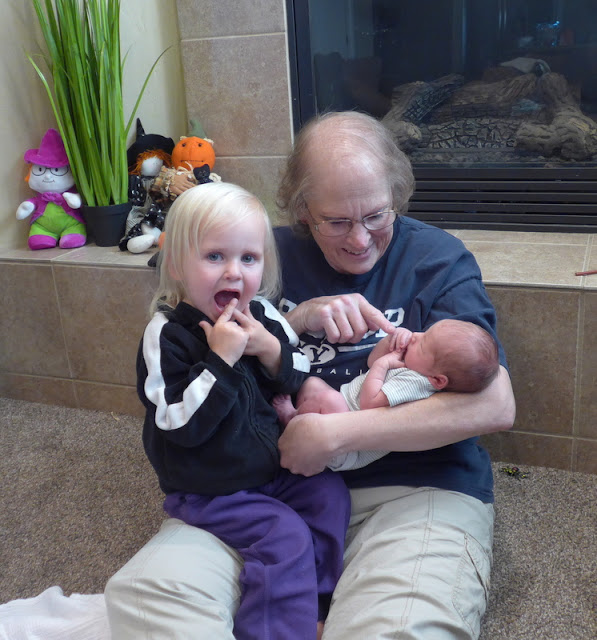 Grandma has been picking Benjamin up from kindergarten, which has been so great. I've walked to the mailbox at one end of our street and the stop sign at the other. I've really got to start working on my endurance so I can take over picking Benjamin up from school when Grandma goes to Idaho next week. I guess I could drive to get him but...I'd rather walk. We'll see. At any rate, it's been great to not have to worry about that!

Here's Zoë getting some early morning snuggles in with Mommy and baby: 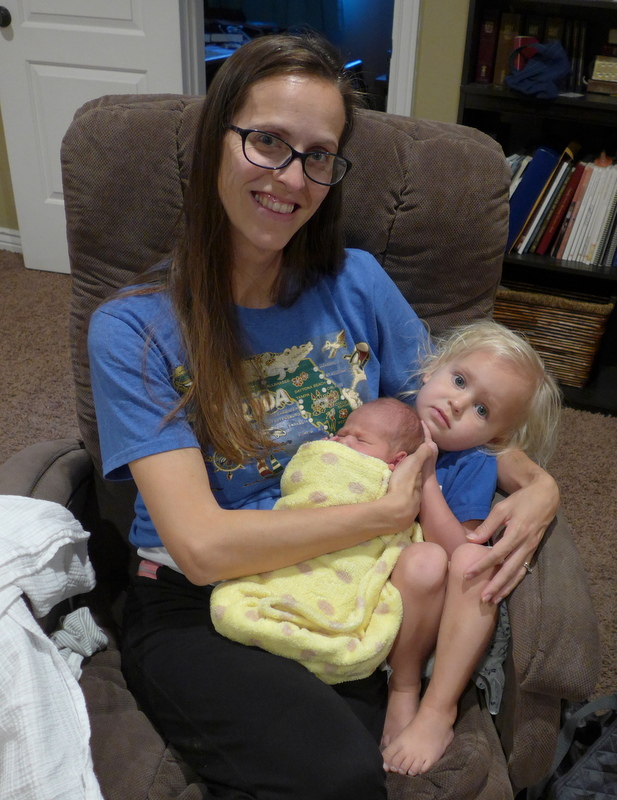 Josie and Rosie have been so amazing. They've been coming over every chance they get. They play with the kids and hold the baby and keep me company and run upstairs to fetch this and that. One time they came over and I just handed them the baby and said, "He should sleep for about two hours. The kids are in the basement. I'm taking a nap." And they totally rolled with it. They've been just so amazing (have I mentioned that yet)? 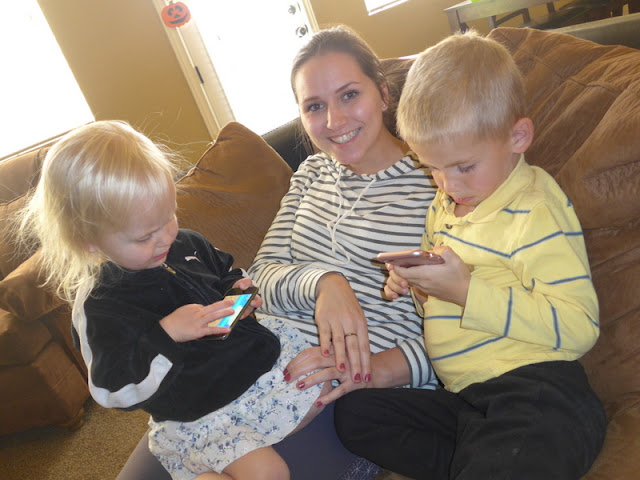 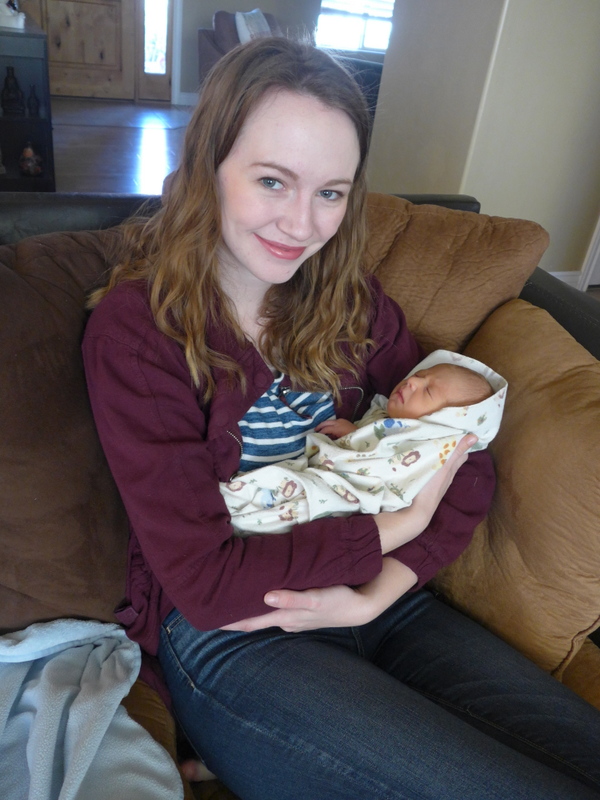 Rosie also has been bugging her brothers about coming over to meet their new cousin. She succeeded in dragging Matthew out here for a bit and then we collectively tried to remember the last time Matthew held a baby. We knew for sure that Alexander had been the last baby he'd held in a long time but we couldn't remember if he ever held Benjamin. 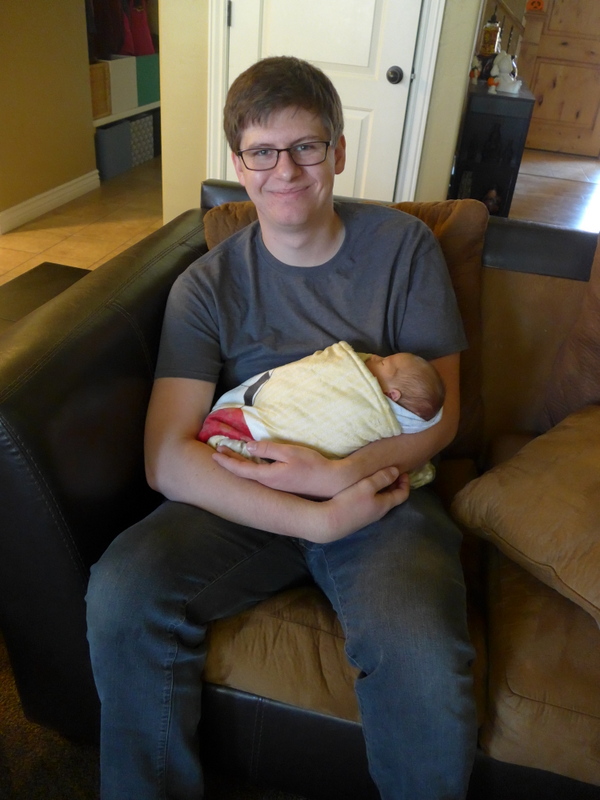 Turns out...he had (so maybe it hasn't been that long since he held a baby):
And last but not least, here's Grandpa meeting Alexander after coming home from his business trip (on Friday, I believe): 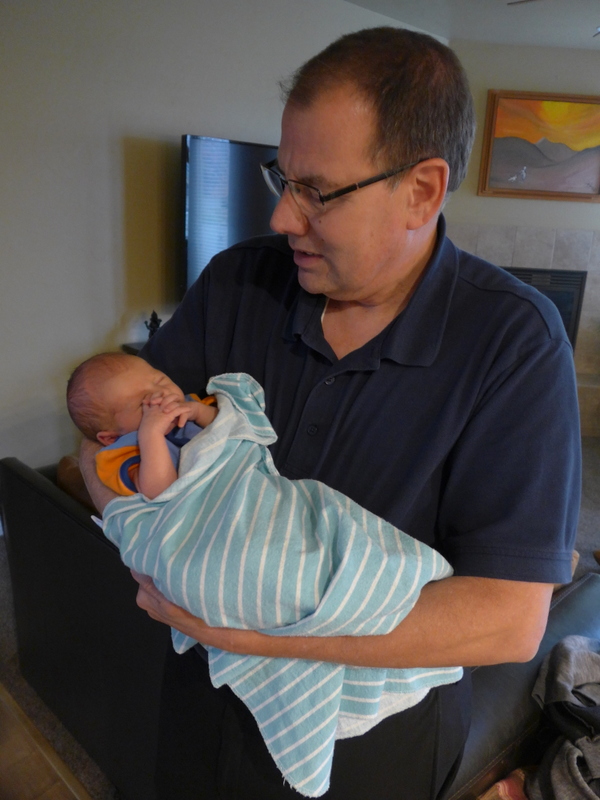 We missed getting a picture of Alexander with his cousin Riley this weekend. We'll have to try for a picture the next time he's over!
Posted by Nancy at 1:58 AM