Miriam's eighth birthday is fast-approaching, which means she'll also be getting baptized soon. When Rachel was baptized we were pretty much at liberty to choose whatever date we wanted because she was one of two children from our ward getting baptized that year (and Callin go baptized out in Arizona during summer break, so...she was the only child from our ward to use the font that year). Out here, though, there are so many kids turning eight, not only in our ward but in our stake, that they have to coordinate the use of the baptismal font (and, my little environmentalist heart likes to think, conserve water), so we have an assigned day and time for baptisms.

I finally found out what that will be: November 4th.

There are a lot of things she can't wait for right now.

Yesterday, while Rachel was at BYU's homecoming spectacular with my mom (seeing Kristin Chenoweth perform live!), we took the children on a little tour de BYU and took enough pictures of Miriam that she was begging us to stop by the end.

She's wearing the very same dress that Rachel wore for her baptism (which still looks brand new because, as my mom pointed out, how often does one (eight-year-old child) actually wear an all-white dress?) and was thrilled to pieces to be able to do so. It's been hanging in her closet since we moved here and she's tried to wear it on multiple occasions but I always make her put it back and change. Because white dress.

Anyway, here are a few several pictures of Miriam in the courtyard of the JFSB: 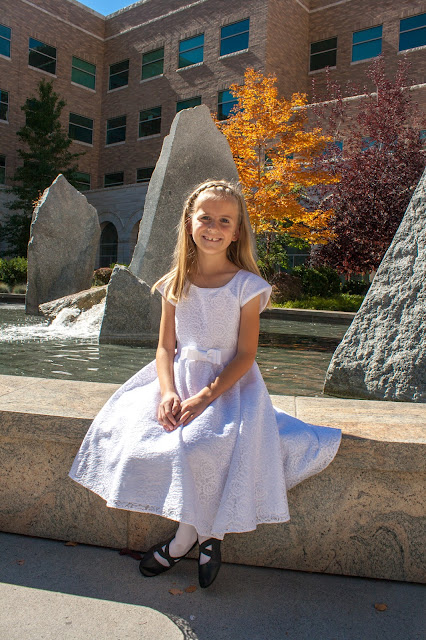 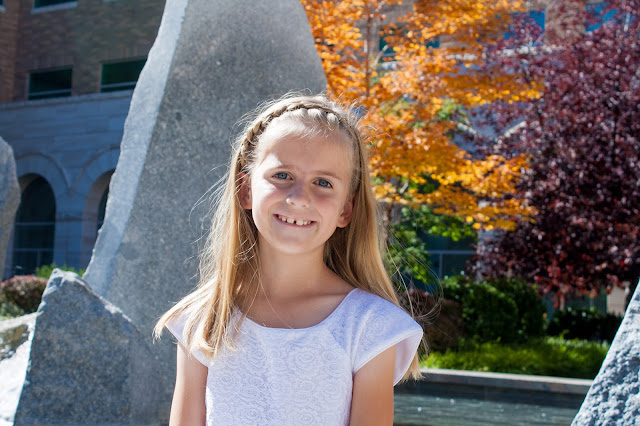 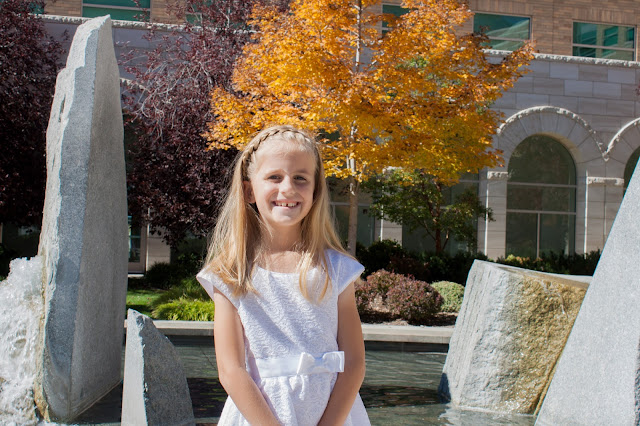 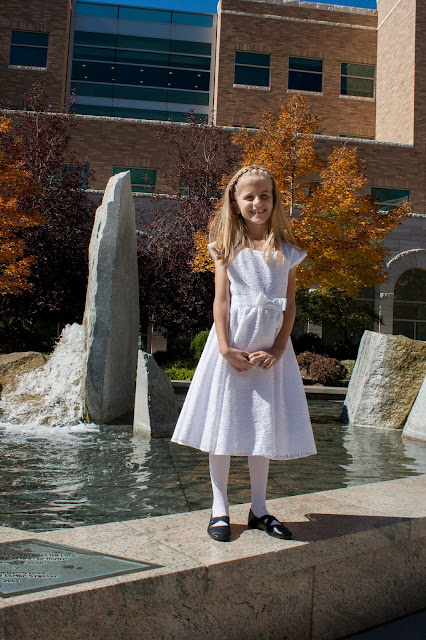 She really wanted a picture of herself on the ground with her dress spread out around her because...Rachel had one taken that way. Rachel, however, is sitting among clover. Miriam is sitting among fallen leaves. Whatever comes with the birth-season territory, I suppose. 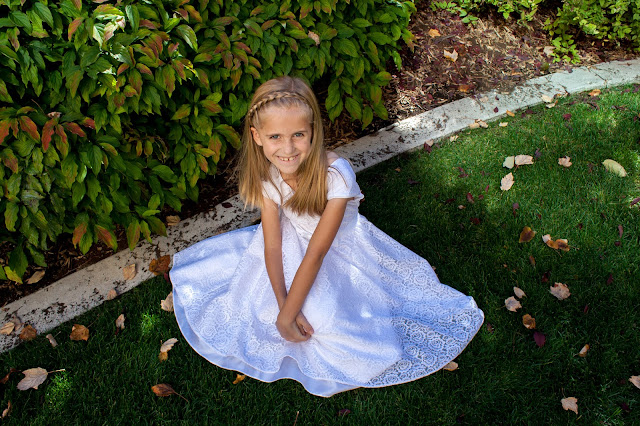 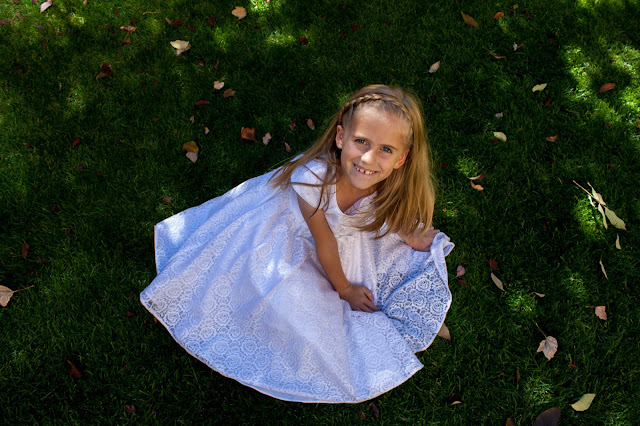 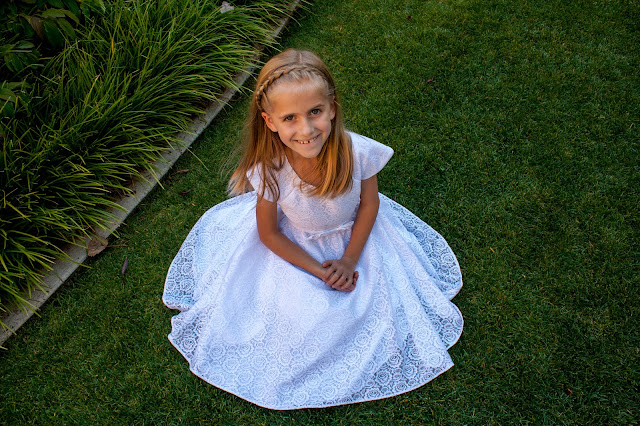 Clearly Miriam thinks all good little girls about to be baptized should pose with their hands clasped together in their laps. We tried several things to get her to loosen up and...do something different...but she always reverted back to hand clasping. 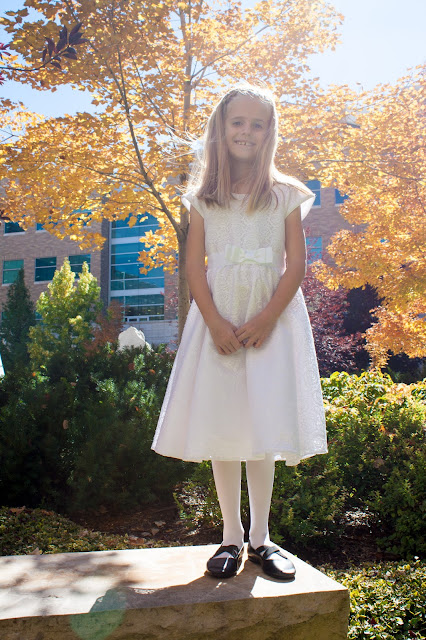 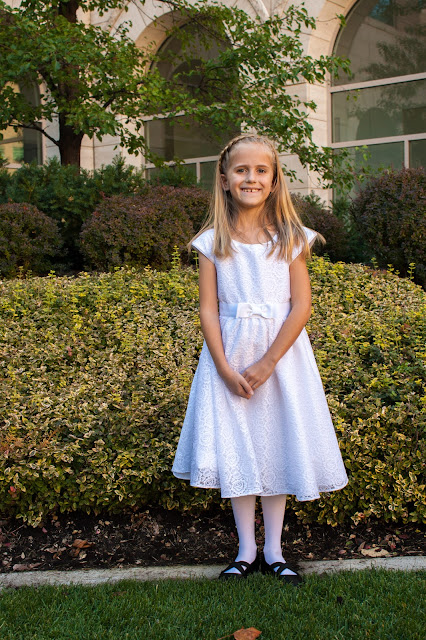 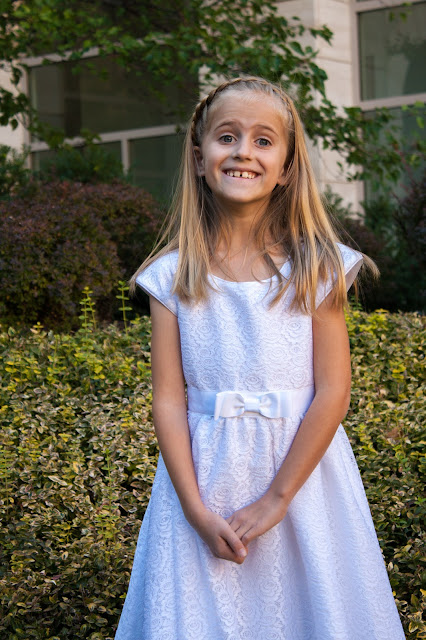 Hey, look! She put her hands on her hips! 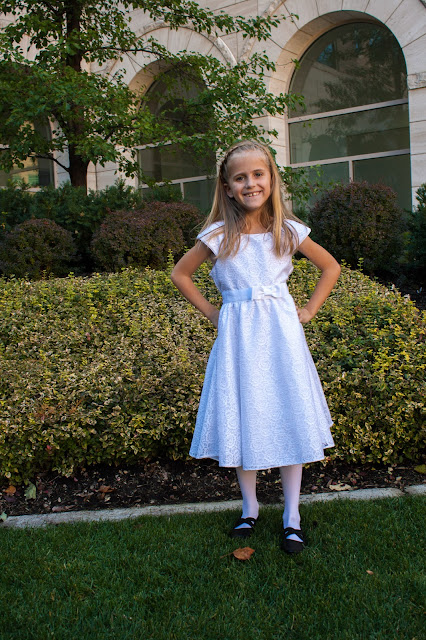 We also took the kids down to see the Tree of Life statue, which—btw—if you haven't visited campus in a while, they've moved, which I suppose wouldn't have ordinarily been a problem because in theory you can see where it's currently located from its old location. However, there's currently a ginormous (ie. true-to-life size) Biblical Tabernacle exhibit going on right now, so we couldn't see the Tree of Life statue's new location due to a big, honking tabernacle being in the way. If only we had known about it; we could have gotten tickets (maybe).

Anyway, we found the Tree of Life, and the kids had fun running between all the little...pillars. 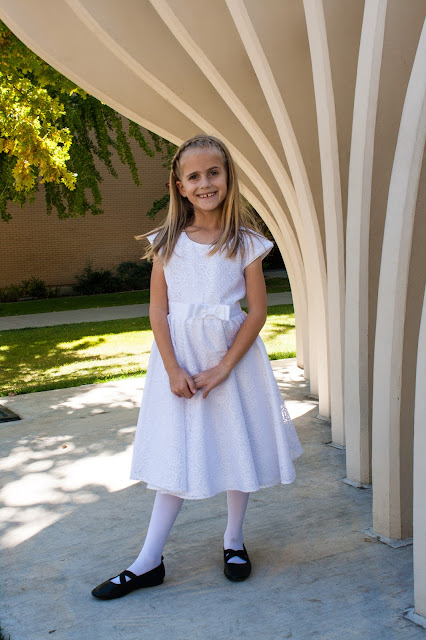 We also took the kids to the little Sacred Grove atrium in the JSB, which Miriam said was her favourite part of the day (it's so quiet in there): 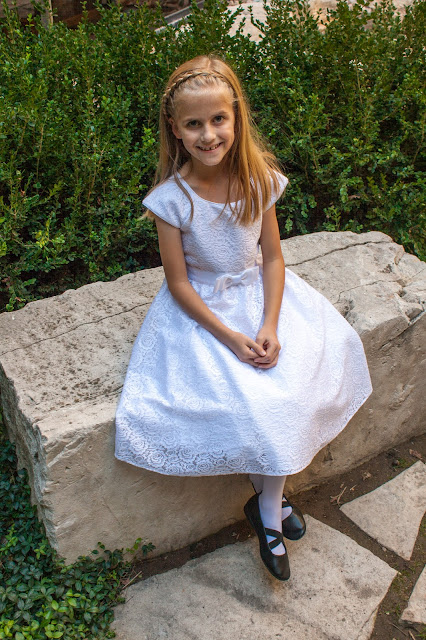 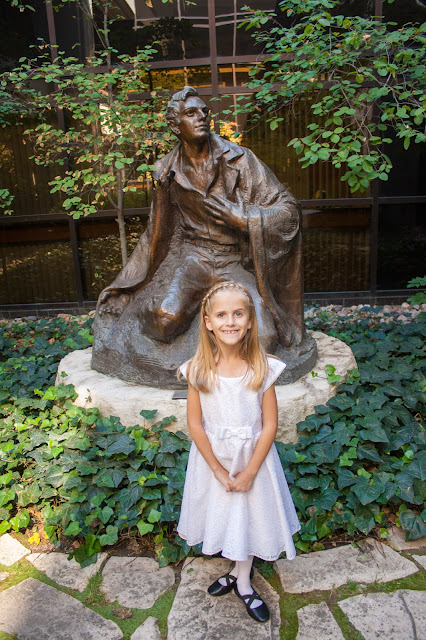 Miriam also wanted some pictures with the Templenacle (officially known as the Provo City Center Temple, but it's a converted tabernacle so we joke that it's called the Templenacle). The lighting was rather harsh, but I think we got a couple of decent shots: 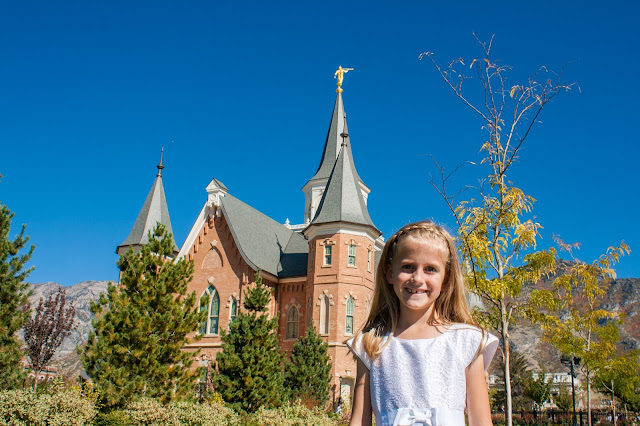 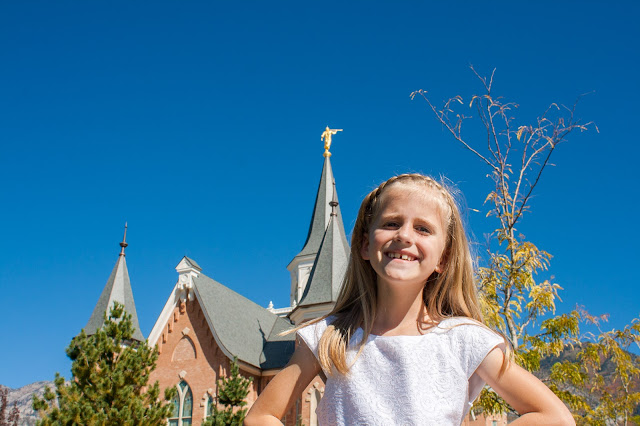 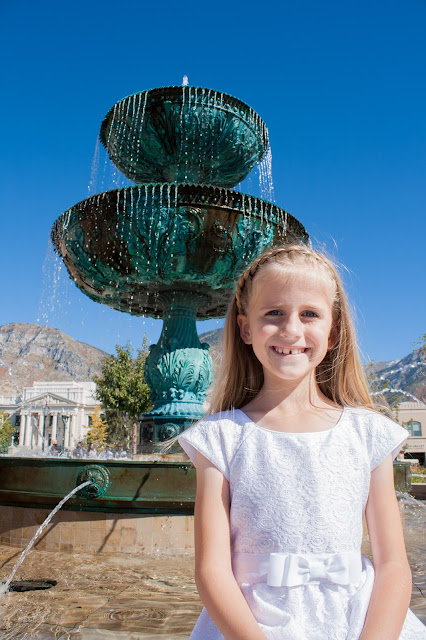 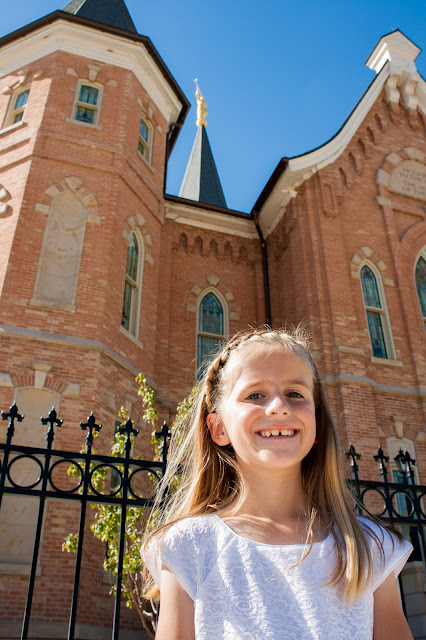 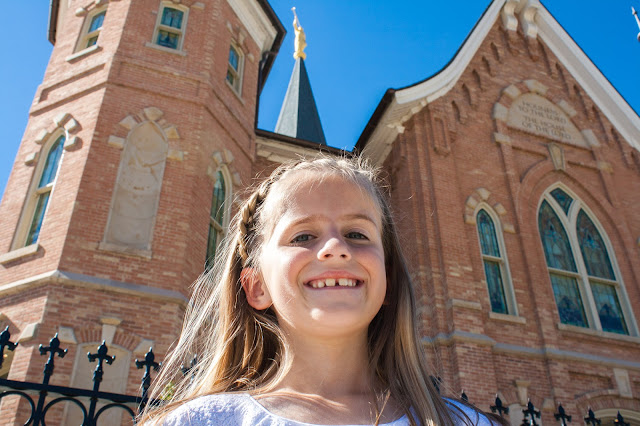 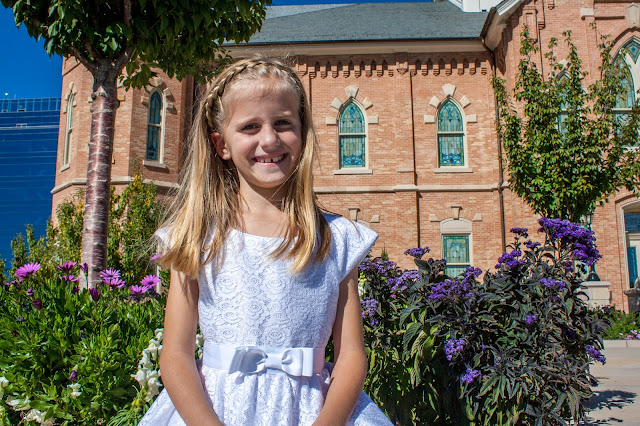 I don't know what it is about this temple that feels so special—the history behind it, probably; its story of redemption, of baptism by fire; the mundane (stake conferences, arts performances, etc.) turned sacred. It's like an architectural testimony of the Plan of Salvation, of happiness. 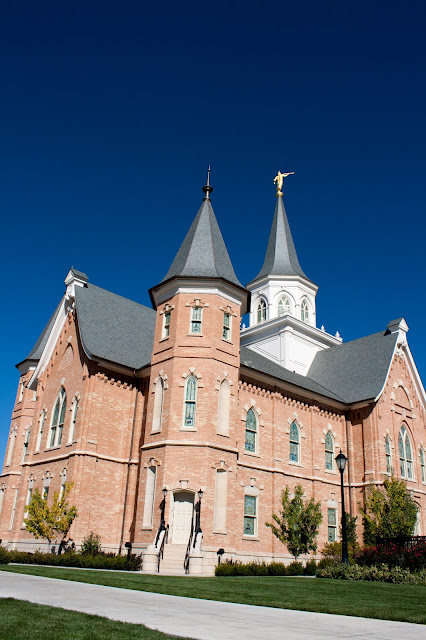 It's not our assigned temple; Payson is, and that temple is beautiful as well! I went last month with Reid (while Andrew babysat) and it was great...though I felt a little small and lost because it's huge! I wasn't used to that at all after attending the Raleigh temple for so long (it's a mini-temple). I'd really like to visit the Provo City Center temple before this baby comes along. Anyone up for babysitting?
Posted by Nancy at 10:49 AM