The Thankful Tree goes up

Last week I said I was all out of ideas for FHE, but then I realized that this Monday—today—is Canadian Thanksgiving and we have built-in family night traditions surrounding that so...next week I'll be drawing a blank.

Sometimes the soups my children like surprise me—like pumpkin and broccoli (soups I probably wouldn't have even considered at their age (soups that I don't think had ever been offered to me at that age)). But, I guess it's nothing to complain about as a parent.

Anyway, the soup was good. And family night was, too. 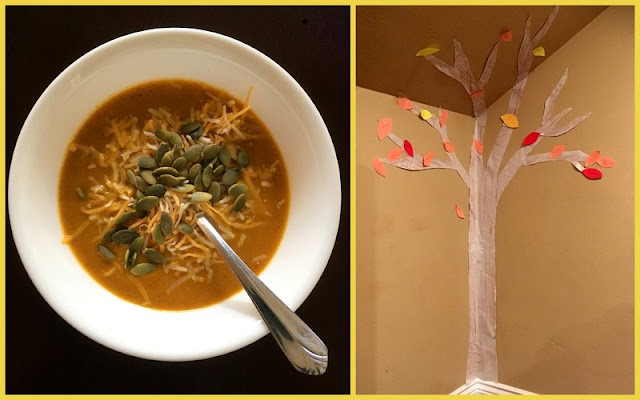 We put up our Thankful Tree, which will gather leaves until American Thanksgiving (much to Benjamin's consternation because the leaves are supposed to be falling, not appearing) and talked about at 1982 conference talk by Marion G. Romney, titled Gratitude and Thanksgiving.

Interestingly enough, he only delivered about 40% of his talk before stopping and telling the congregation:


Well, now, I have a fine talk prepared that I can’t read. I will have it printed, and you can get the message plainly from what the Lord has revealed that we must give him credit for our gifts and our accomplishments, and be grateful in all things that he confers upon us. I am grateful to him for the privilege of being in his service. I appreciate the opportunities that I have and hope that I can serve him some way and show my gratitude the rest of my life. I leave my blessings with all of you in the name of Jesus Christ, amen.

Talk about "weird things that have happened in General Conference!"

The rest of his talk was published, of course, but how sad that he couldn't see to finish reading it himself!

Anyway, we talked about the Ten Lepers and read some of the scriptures from D&C that Elder Romney referenced and ended with his testimony:


that the Lord wants us to be grateful and thankful unto him. And if we do these things which he has advised us to do, we will be the happiest people who dwell upon the earth, for this is the way to the presence and society of our Father in heaven. I so testify, in the name of Jesus Christ, amen.

The kids were more excited about putting leaves up on the tree than having a gospel discussion (and I wasn't the most animated lesson giver (I'm so exhausted (hey, I have an idea for next week's FHE, baby: get outta my belly!))), but I suppose that practicing gratitude was the whole point of the lesson/discussion so that's just fine.

We talked a bit about how being grateful for things can help turn your attitude around and Miriam raised her hand and said, "I have an example of something that happened a couple of hours ago." We told her she could share her story and she said something like, "When we were playing outside we were jumping over the little picnic table and I fell and bent my finger back."

Everyone stared at her, waiting for her to continue, to get to the point of her story. You know, bring it back to the lesson, drive the point home, tie everything in. Instead she stared blankly back at us.

"You didn't feel grateful about anything or..."

"Okay. Well. I'm sorry that happened. So...Benjamin would you like to pass out some leaves to everyone?"

It was such a random little interjection for a little girl who is usually so on point. You win some, you lose some, I guess.

(PS: Crys—our wall is only like 5 ft tall there so it's not a ginormous tree (but definitely bigger than we've gone in the past—hey, we had the room))
Posted by Nancy at 12:29 AM