My cousin Eric texted me on Friday afternoon to say that he was in town for the weekend (it's General Conference) and that he and his wife and baby would be in Provo for the next couple of hours, so I hustled the two little ones out the door (leaving Grandpa to meet the girls after school) and headed to Provo. I haven't seen Eric in years—more than five, at least (in fact, this may have been the last time we saw each other). At any rate, it's been long enough that he hasn't met Benjamin or Zoë and I haven't met Jocelyn or Payton.

Obviously that's been too long for the two of us to go without seeing each other because we kind of grew up together—we're just a couple months apart:

Unfortunately we didn't recreate this picture. In fact, I didn't get a picture of us together at all! My mom snapped a photo of him when he stopped by the library to visit her, though:

I did, however, remember to snap a few pictures of our little ones. Benjamin and Zoë were fascinated with Payton and she was very tolerant (if slightly terrified) of them (they can be a bit much, those two): 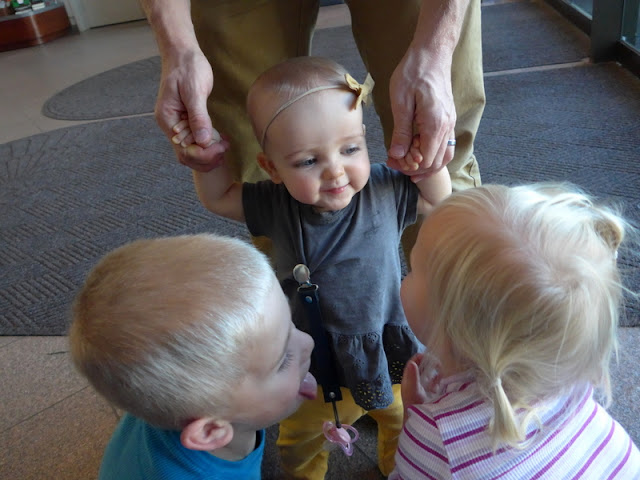 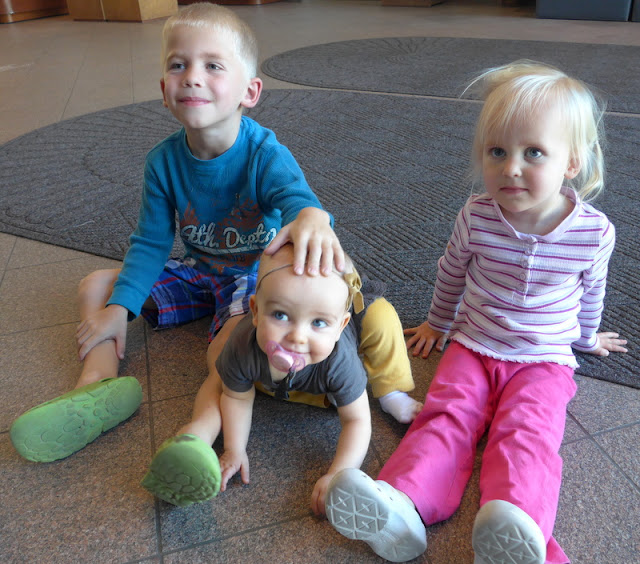 Zoë managed to dig an old pacifier out of the toy box when we got home and has been using it sporadically throughout the weekend, claiming, "I baby." Obviously Payton made an impact on her. 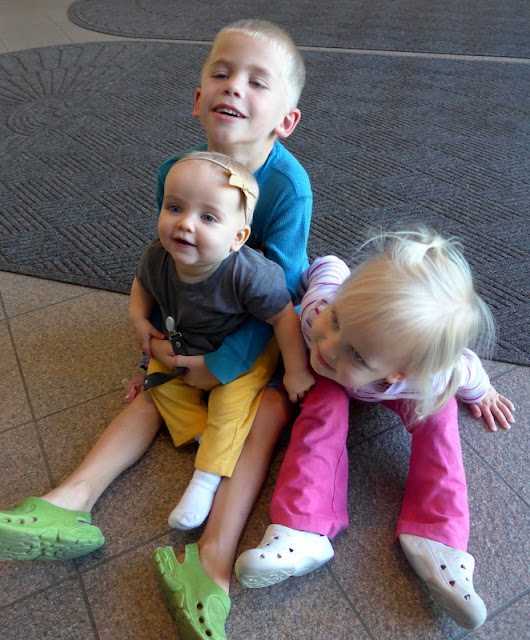 Getting all three kids to look at the camera and smile was impossible: 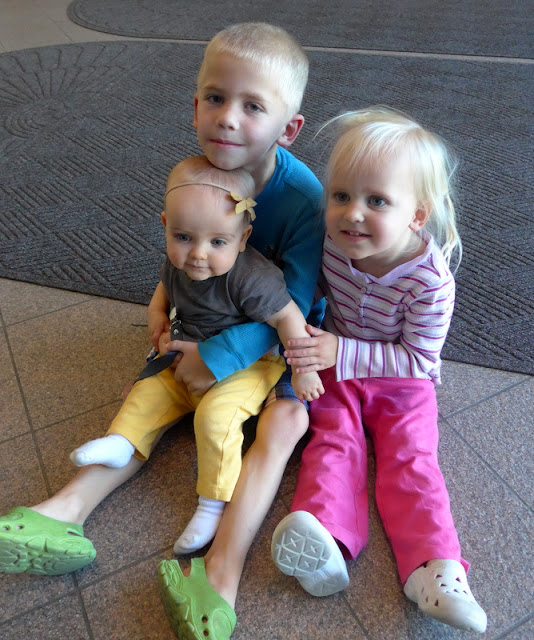 We visited for about half an hour before Payton was getting obviously desperate for a nap. Eric and Jocelyn had a very full schedule planned for this weekend so I was glad for any time they could spare for me! 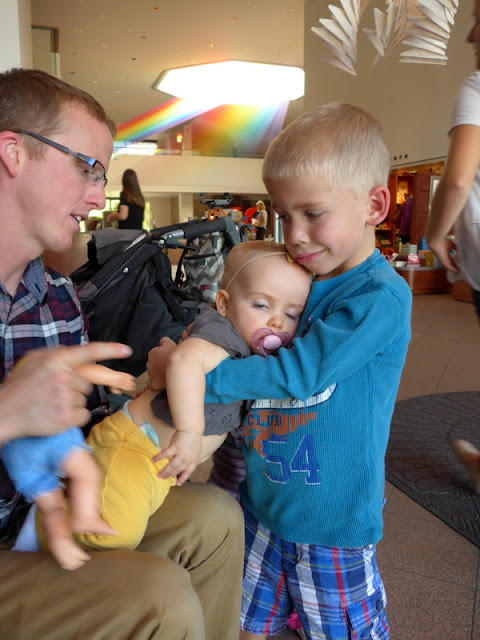 Benjamin took to Eric right away (name one person he hasn't cozied up to within seconds...) and Eric gladly tossed him around and did some low-key roughhousing. When Benjamin started shrieking, "Again! Again!" Eric tried to remind him that we had to be quiet because we were in the "library. I mean restaurant. I mean zoo. Zoo?! I mean museum. We're in the museum. We have to be quiet!" 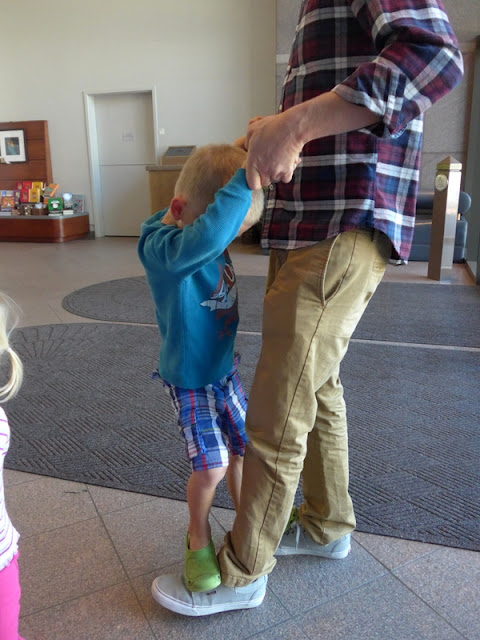 In his defence, Eric had been at the library earlier in the day, there is a restaurant in the Museum of Art (which was smelling divine), and zoo is nearly a syllable in museum (and sometimes wrangling a bunch of kids feels like a zoo). He got there eventually. The museum. We met at the MOA.

"You know, Eric," I said after Eric's little bumble, "Benjamin actually reminds me a bit of you!"

When pressed for details I admitted that they both seem to be just a little bit louder and more energetic than the rest of the people in their families. They've both added a lot of fun to the households they were born into, that's for sure! (Does that seem like a fair observation to anyone who knows the two of them?)

After we said goodbye to Eric's family, we headed over to Daddy's office to surprise him (I guess we could have had Eric meet us there but it was all so spare of the moment that I didn't think of it). I had Benjamin knock on Andrew's door and he was rather surprised when he opened it to find his little mini-me standing there instead of one of his students (he was swamped with student appointments on Friday). We didn't stay too long because Andrew had another student scheduled to arrive at any minute, but Benjamin and Zoë had fun raiding Daddy's snacks and spinning in his office chairs before we left.

I didn't take any pictures there, either, but I did take a few on our way back to the parking lot.

Here are the kids making themselves into big Ys: 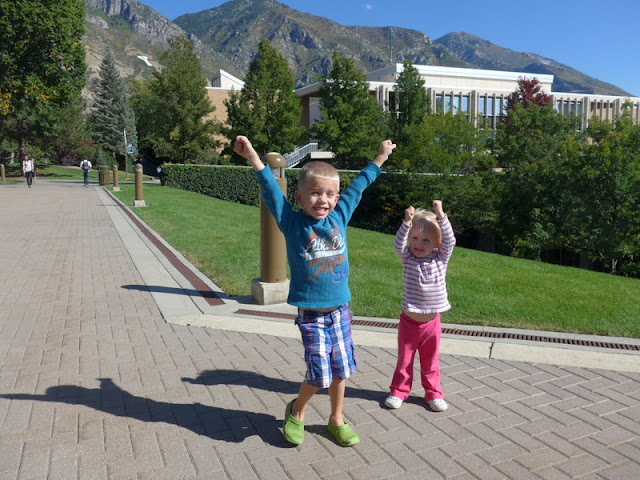 And just being goofy together: 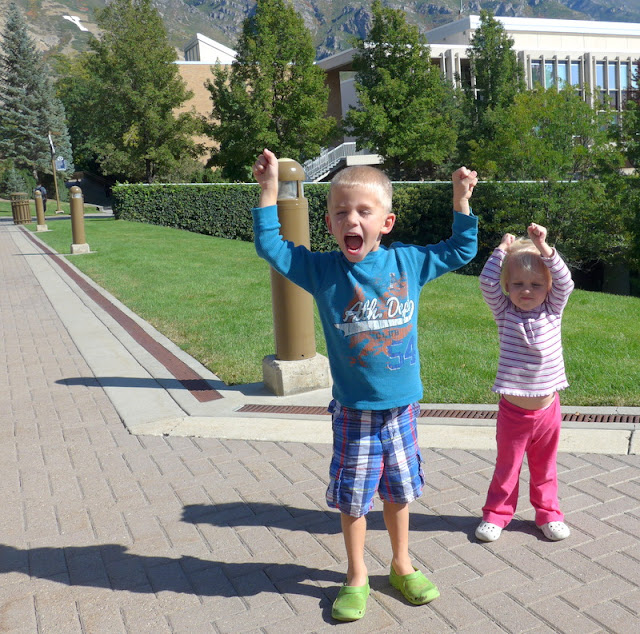 And one more of them posing by one of the sculptures outside of the MOA: 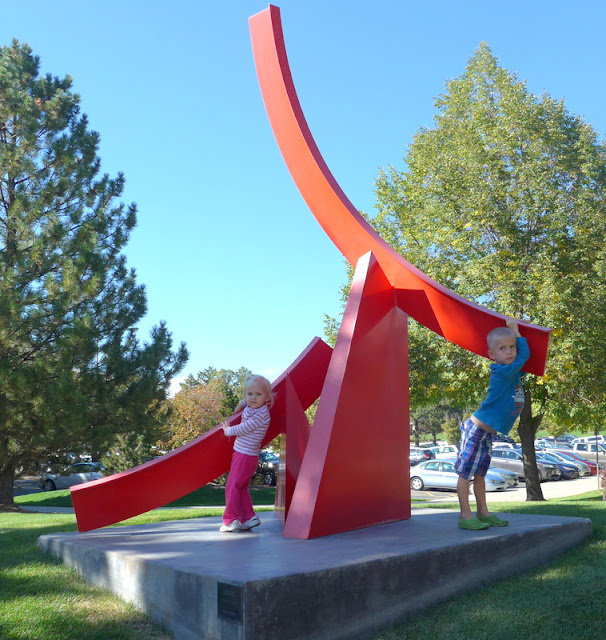