Miriam's birthday celebrations began on Friday, October 13, when we joined her for a special birthday lunch at school. Zoë and I picked up Benjamin and then found Miriam in the cafeteria. Just as we were cleaning up, Rachel's class came in for lunch so we got to see her for a couple of minutes as well. (Rachel is wearing that yellow badge because she likes to go in to volunteer in the special education classes (that's her pass); I think it's so cool that the school encourages kids to volunteer with their peers).

Here are my four out-of-the-wombies together: 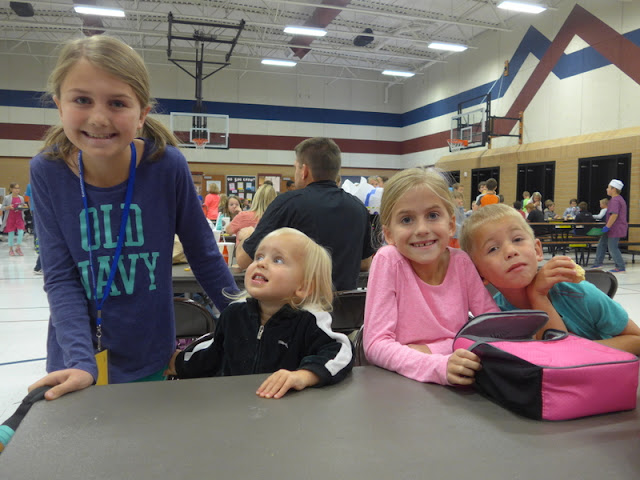 At this point Alexander was still in the womb. But he'd soon be making an exit.

Ironically, I sat by the Relief Society president who was there for one of her children's birthdays and she asked me when my baby was due.

"The thirty-first, actually," I said. "Which is basically November."

It was fun to get to sit with Miriam and chat during lunch.

After school Miriam got to go to a Halloween party at a friend's house. Rachel offered to walk her over, which I was grateful for because I was starting to feel...blah. By the time it was time to pick Miriam up I was pretty positive I was in labour, but not 100% sure. We all walked over to get her after dinner and she ran out of her friend's house carrying her goody bag and gushing about how wonderful the party was.

I asked her if she had remembered to thank her host. She had not.

I wanted her to be polite and encouraged her to go back to thank her friend's parents.

She was too embarrassed to.

I started prodding her some more but then I had another contraction and thought to myself, "Who the heck cares about decorum?! Let's just go home!" and sent a hasty text message thanking her for the party. One day, perhaps, I'll tell her that we were rude and didn't come to the door to thank her because I was in the middle of having a baby, apparently.

But clearly all that was a couple of weeks before Miriam's birthday. On her actual birthday we had a small family gathering at Pizza Pie Cafe (grandma, grandpa, our family, Jacob, Shayla, Carter, Josie, and Patrick) and then reconvened at our house for cake and presents.

Andrew had a job interview at 6:30 (kind of a weird time for a job interview, especially considering it was 7:30 in the time zone of the job, but you take these kinds of things when you can get them) so he came from campus to join us, ate really fast, and then headed back to campus. 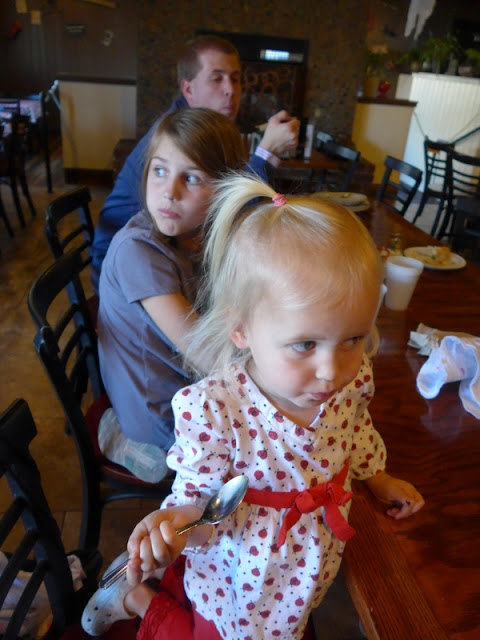 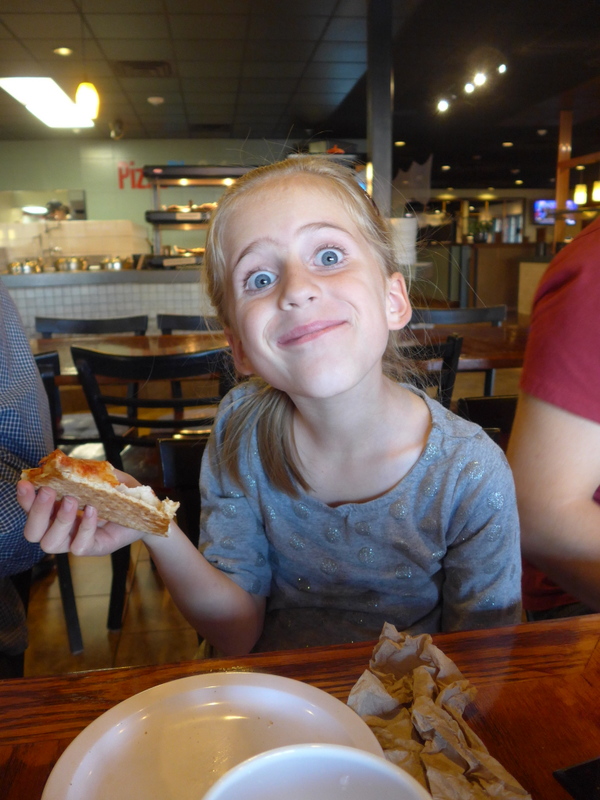 And here she is with her special birthday dessert: 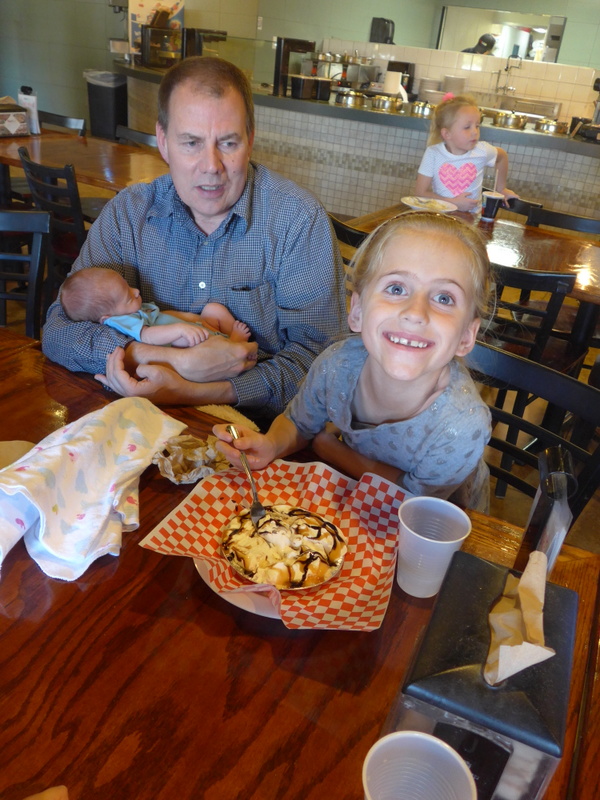 Once at home we sent the kids down to the basement to play while we waited for Andrew to finish his interview, Patrick to finish with his intramurals, and Naanii and Josie to finish with their hymn-sing at the library. Everyone else enjoyed visiting and watching/holding the babies. 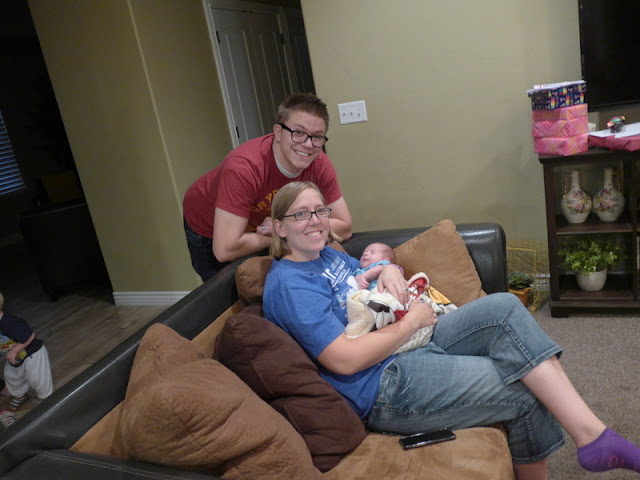 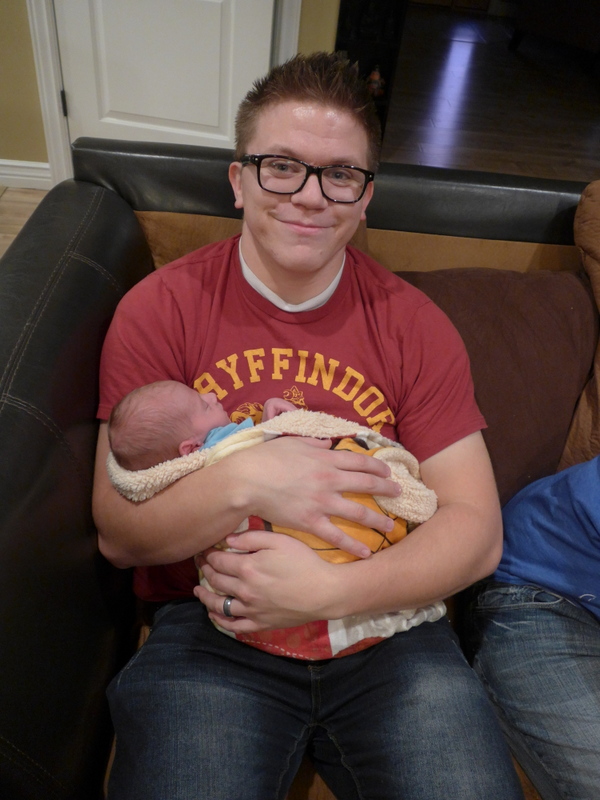 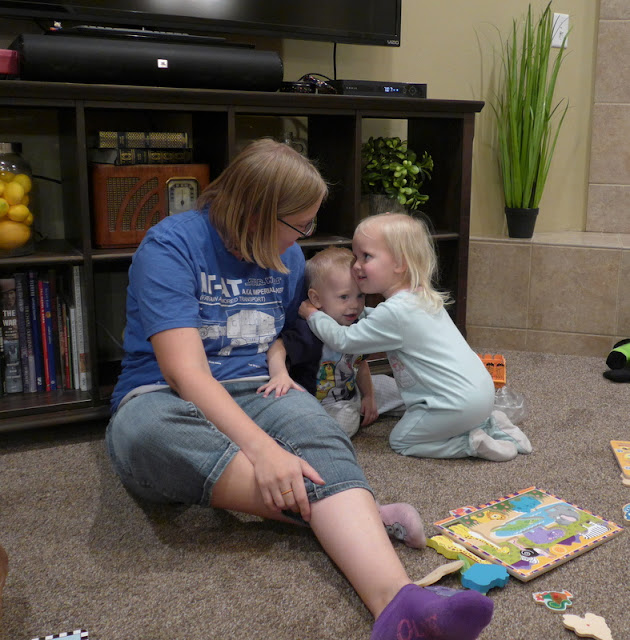 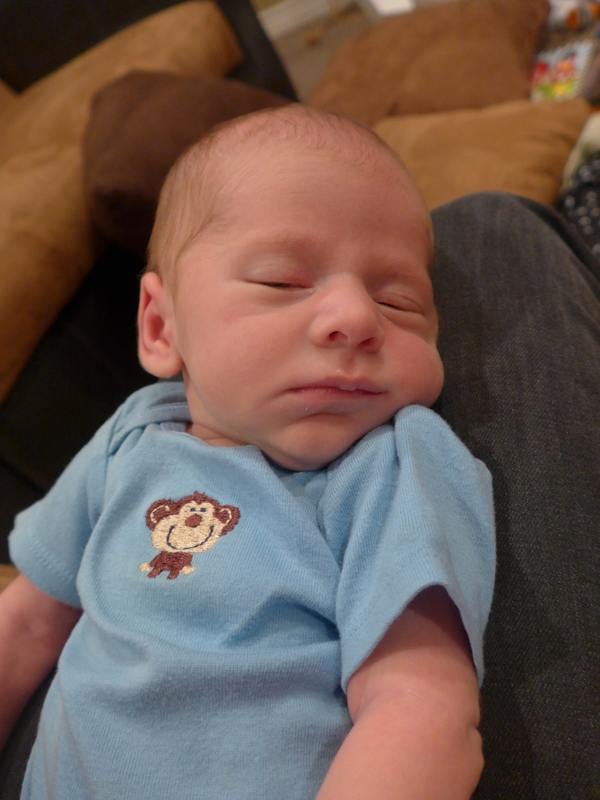 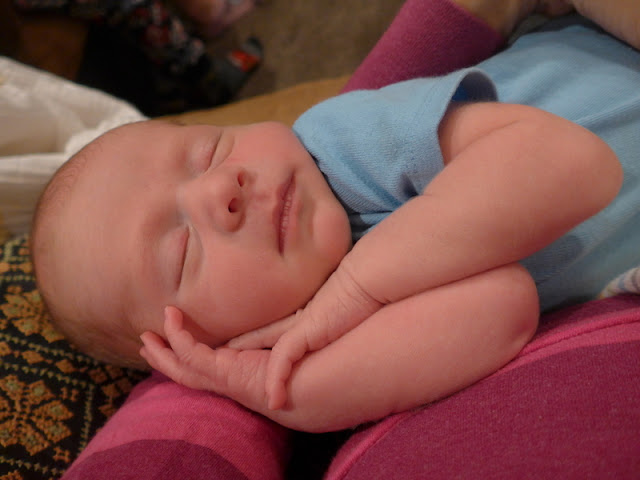 Miriam wanted an ice cream cake for her birthday, so I made one. It's not super fancy but it was pretty yummy (though the cookie layer on top was a little bit thick and, on account of being frozen, a little difficult to get through). 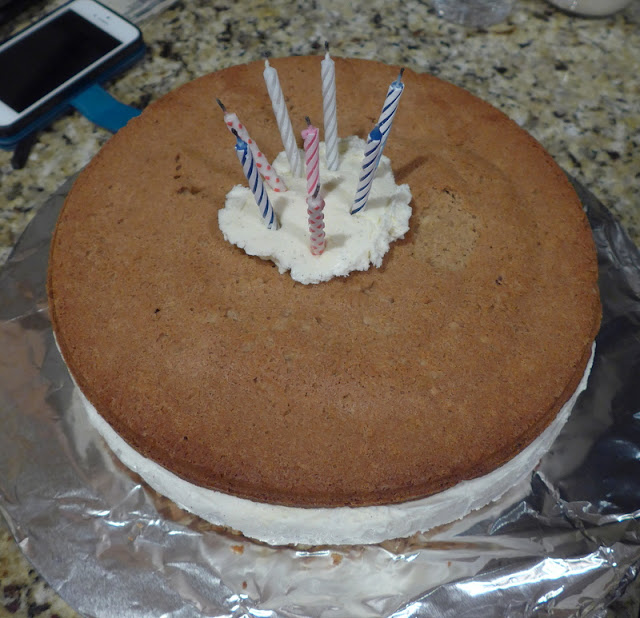 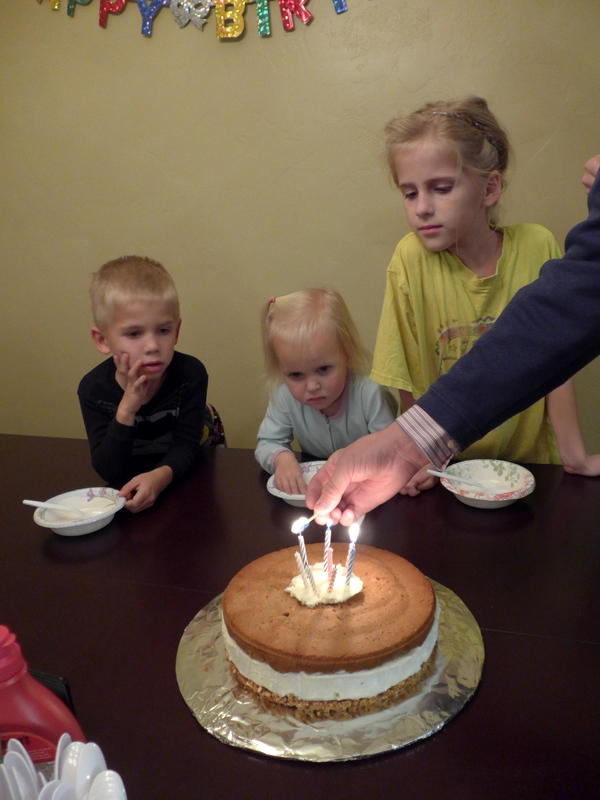 Here's Miriam while we're singing to her: 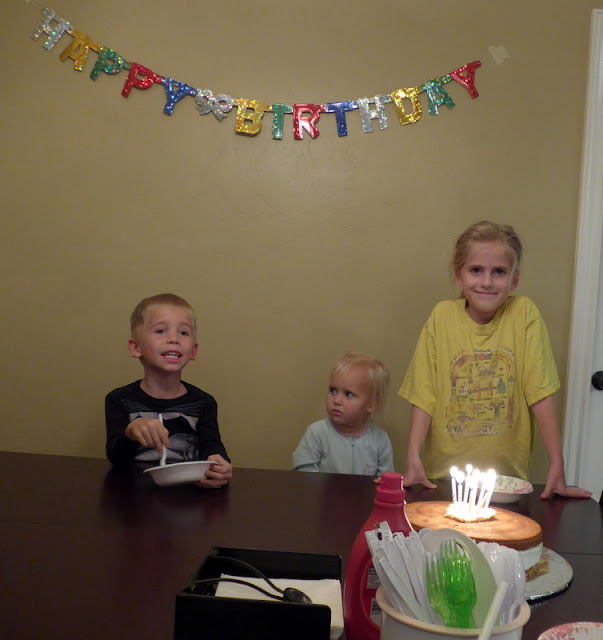 And here she is blowing out the candles: 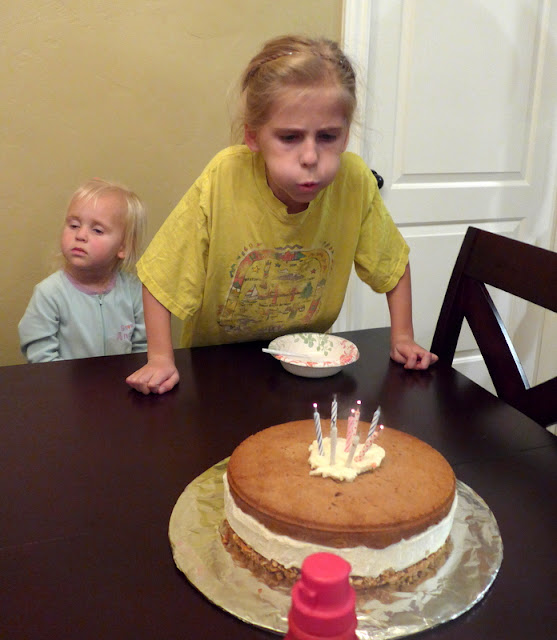 And last but not least, a very candid photo of Patrick, Josie, and my mom: 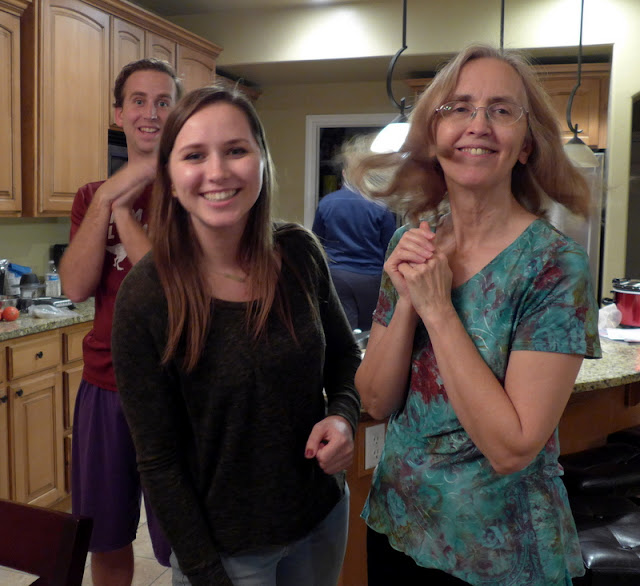 It was a pretty low-key celebration, but since we'll be celebrating Miriam again this weekend, I'm pretty okay with that. Happy Birthday, Miriam!
Posted by Nancy at 12:41 AM