Look at my wonderful village!

Not that we had any sort of spectacular plans for fall break anyway, but Alexander's arrival meant that I, for one, was completely out of commission—hunkered down, in bed, with a newborn. I admit that I was a little worried that the kids would be bored out of their minds their whole vacation and would go to school with no news other than "newborns are actually quite boring" while their friends were telling tales of camping and road trips and Disneyland and so forth.

Fortunately, our wonderful village didn't let our children idle away their time.

On Thursday morning, Grandma bravely took all four kids to a pumpkin patch. It cost $3 to "get in" but then all the "attractions" (except horseback rides) were free, so it ended up being a good deal. My mom was impressed with the idea because all the rides used farm equipment, which, in her opinion, makes the best sort of playground (it's the sort of playground she grew up on). I'll admit that climbing around farm equipment is rather fun (I've done a bit of it myself, though not nearly as much as my mother).

Here they are on the horse-walker-turned-swing-set: 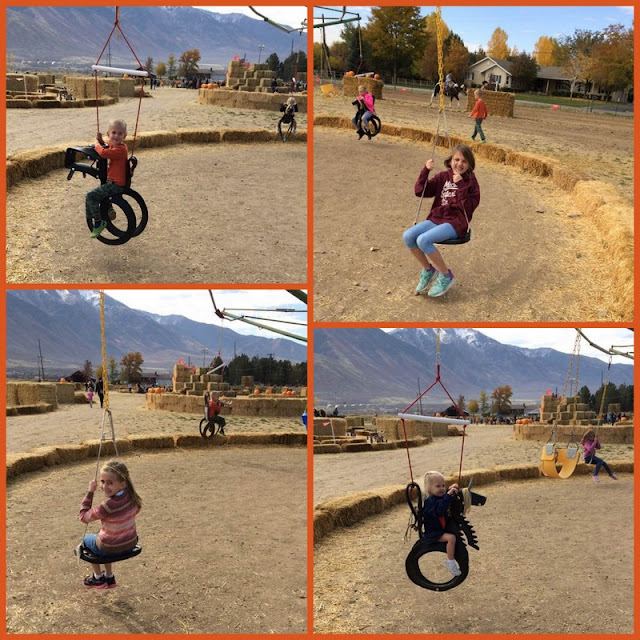 And here they are playing in a bin of corn (but not a bin so deep that grain entrapment is an issue (my mom was particularly excited about the grain bin because as a child she always wanted to play in the grain but her dad would never let her because, as he told her quite bluntly, "You'll die."). Maybe we'll have to go back so that Naanii can play in the grain, too! 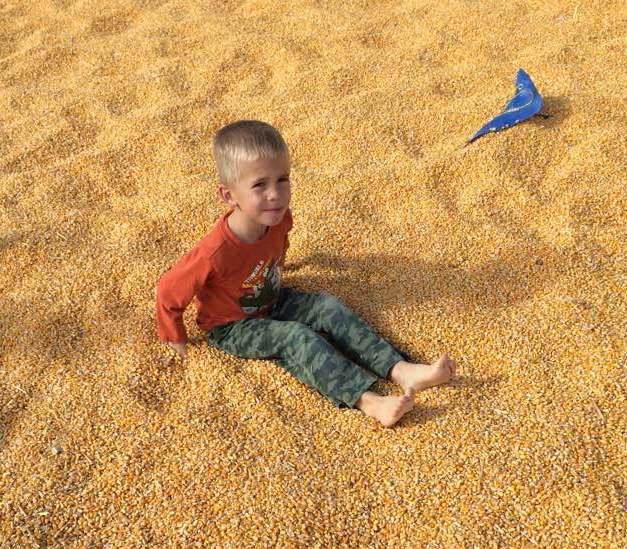 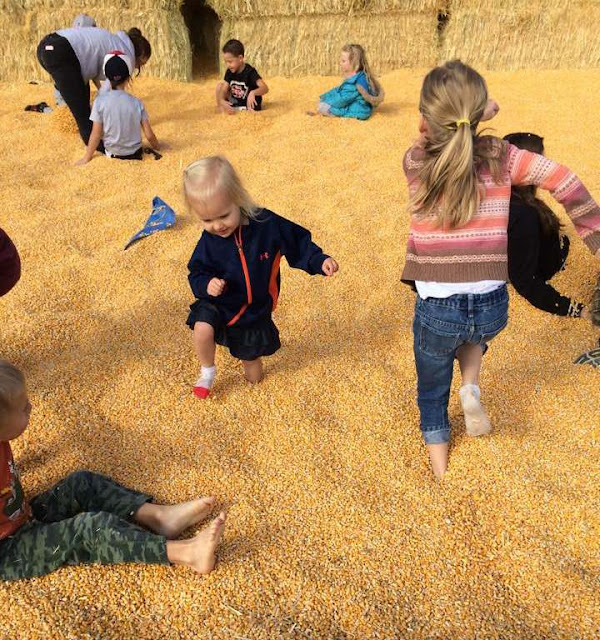 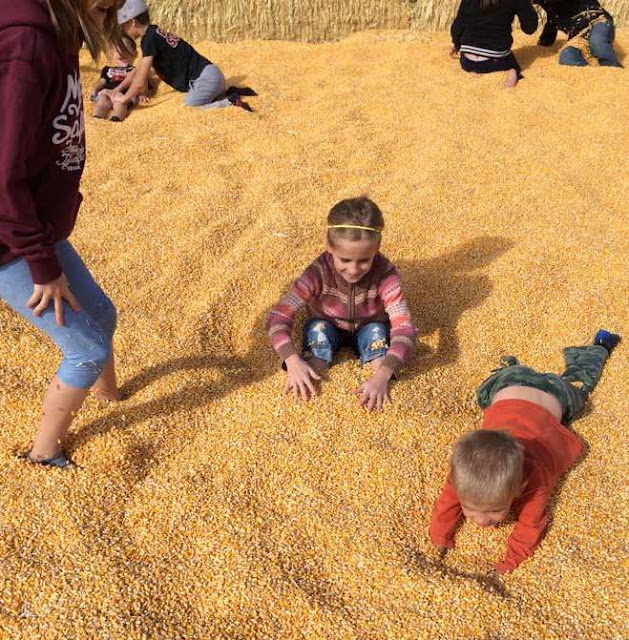 There were also some ride-on toys for the kids to play on: 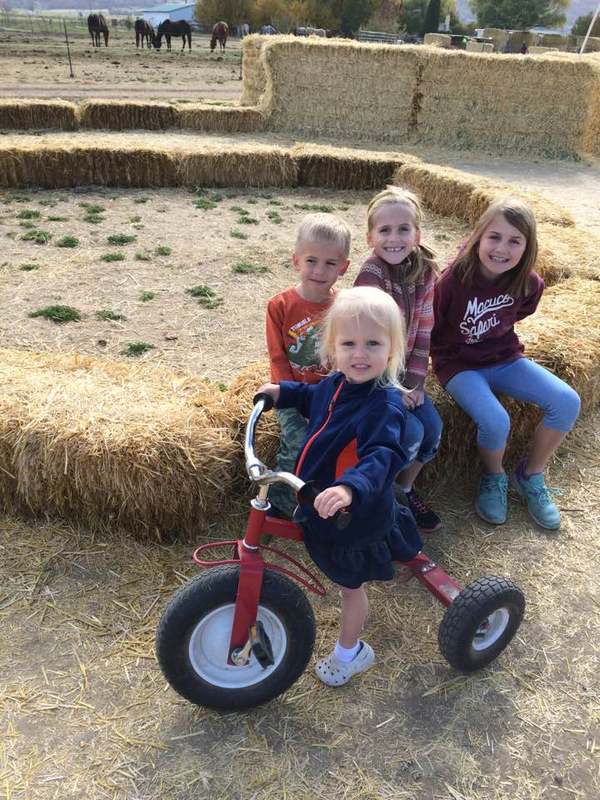 The kids' favourite thing was the wagon ride: 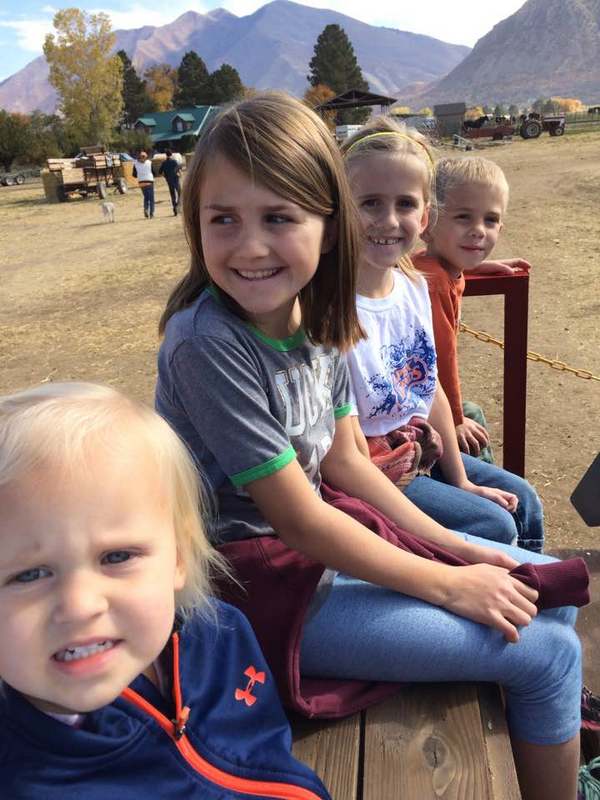 There was a huge tower of straw for the kids to climb on: 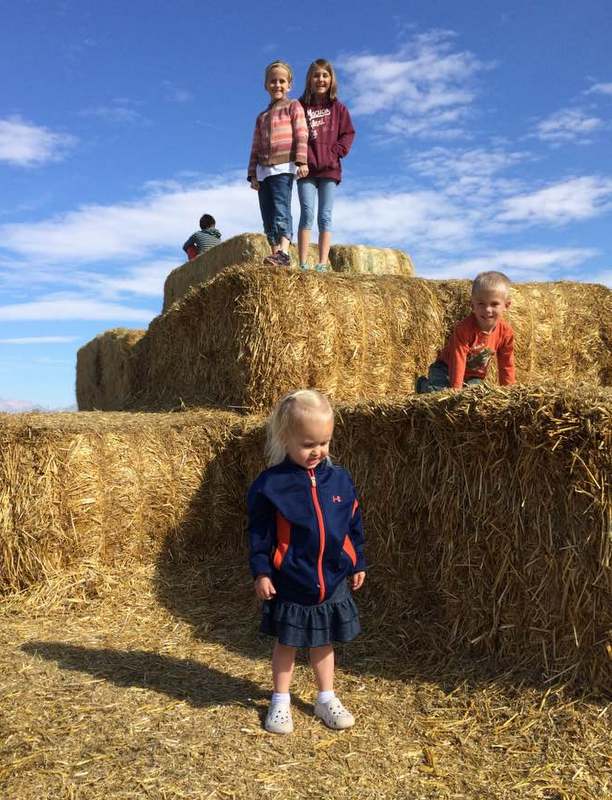 And some slides to help them get back down (or maybe the slides were a separate thing; I don't know): 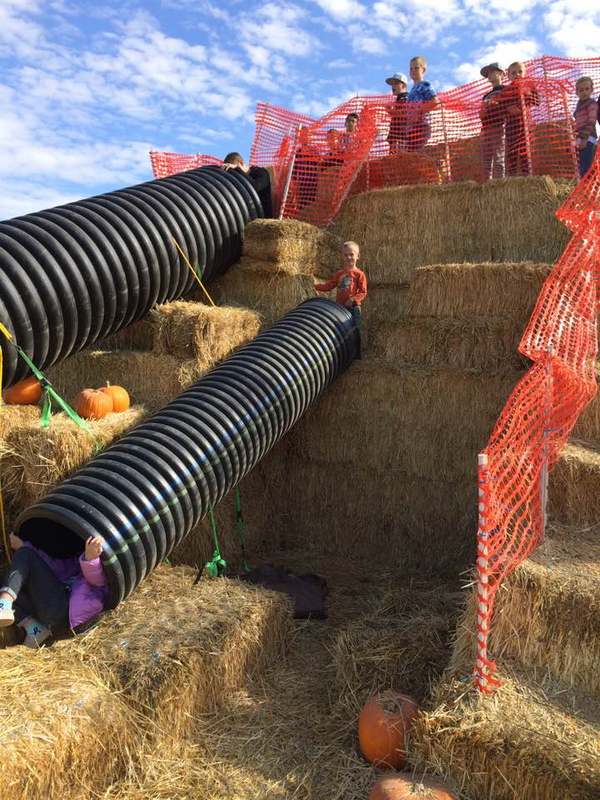 They had so much fun! They wore Grandma out but after a quick lunch, she drove all the kids to BYU where she dropped Rachel and Miriam off to do some hiking with Uncle Patrick before taking Zoë and Benjamin to the Creamery for a conciliatory ice cream cone (the little ones really wanted to go hiking, too, but there was no way I was going to foist them on my brother like that).

Here are the pictures Uncle Patrick sent me of their ascent up Y Mountain (though, I suppose some of the pictures could be of the descent (I don't know; I wasn't there))...

Here are the girls at the trailhead: 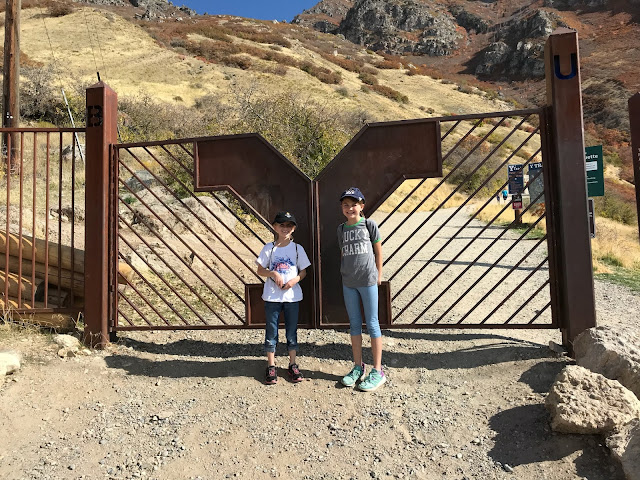 And here's everyone at the top (apparently the hike made them feel tired): 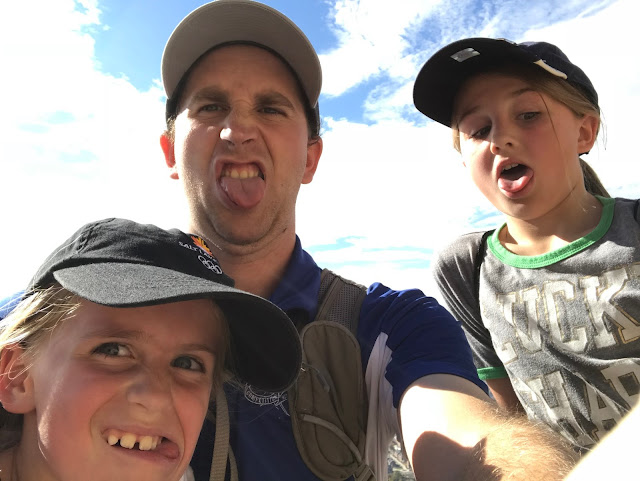 It's a good thing they went on Thursday, though, because the weather was perfect. A Friday hike had been on the table for a bit, but Friday turned out to be cold and windy.

Here are the girls with the Y in the distance: 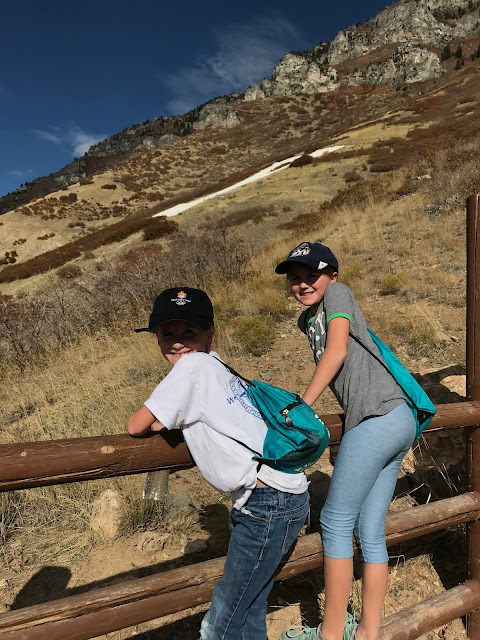 They hiked right to the top of the Y: 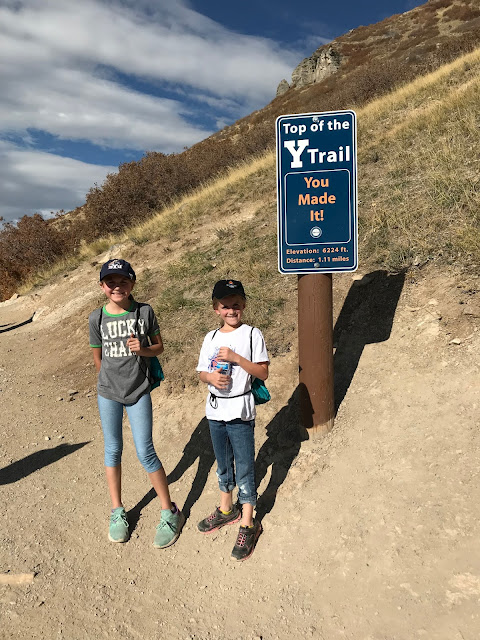 Here they are gazing across the valley, trying to identify various landmarks from their perch: 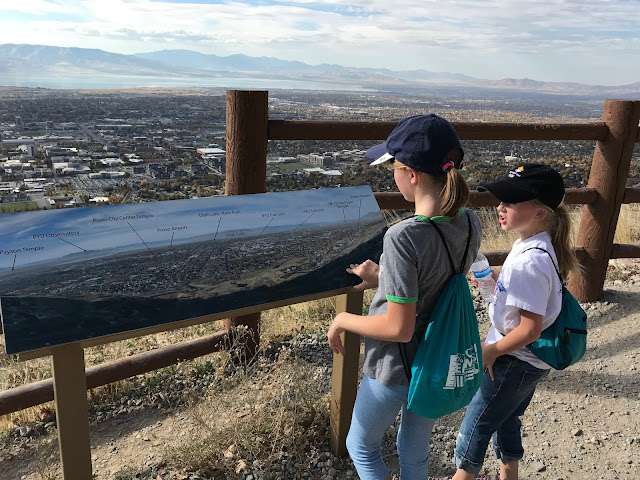 The fun only continued on Friday. My mom picked all four of them up in the morning and bravely took them to the movies. They watched the new My Little Pony movie, which no one came home raving about, in case you wanted their opinion. Zoë and my mom even took a little nap together! Still, it was fun to go to the theatre.

They were supposed to try to go to a little concert at BYU beforehand, but they ran out of time because it now apparently takes me forever-plus to get my kids out the door. I was pretty sure we were already taking a long time to get everyone out of the house but apparently adding a brand new baby compounds the foreverness of getting ready to leave the house (and the baby wasn't even going)! So they missed the concert, but they did get to play at a playground before the movie (and before the weather turned cold and windy).

After the movie my mom came back to our house, intending to drop off the little ones and keep the big ones, but instead she ended up taking Rachel and Zoë back to campus with her. They got to go to her gamelan rehearsal and helped move the instruments in and out of storage, which Zoë was particularly pleased about. She kept telling everyone, "No, me! No, me!" and I imagine she also slipped in some "My own. My own," so that everyone would know she could push these great big instruments all by herself.

Rachel and Zoë then got to eat dinner at Naanii and Bumpa's house (though I believe Zoë only ate strawberries).

Miriam, obviously, chose to stay home so she happily entertained herself in her bedroom. Benjamin, however, did not opt to stay home and was rather upset about not being allowed to go. Zoë got to go...because she threw the biggest tantrum, I guess (and because my mom was trying to give me a break and leaving me with a screaming toddler didn't seem to be much of a break to her for some reason).

Luckily, Grandpa (who had been in Texas on a business trip) arrived soon after my mom left with Rachel and Zoë. He took a few minutes to meet his new grandson and then had to make a bunch of phone calls to sort out his missing suitcase. He'd taken a shuttle from the airport and there were a few missionaries on their way to the MTC (Missionary Training Center) in the shuttle along with him. When they stopped at the MTC the shuttle driver unloaded the missionaries' suitcases...along with Grandpa's suitcase...and then they continued on their way to our house, leaving Grandpa's suitcase feeling rather lonely on the sidewalk outside of the MTC.

He took Benjamin with him to go pick it up and Benjamin was so thrilled to pieces about being invited along that he didn't even care that it was only an errand and not an adventure.

It's been wonderful to have so many helpers around, especially because Andrew was only able to Monday off (he's just been so swamped—he's teaching block classes this semester so this week is both finals week and the first week of the new block; it was kind of crazy timing to have a baby)!

*A note on the title: In high school our friend Jake had an exchange student from Germany. His name was Sebastien and he was a wonderful pianist, though, rather ironically, a terrible dancer. For some odd reason he simply could not get the timing right for any dance. To be fair, I feel like I was a decent dancer back in high school...but my piano skills were (and still are)...lacking. So I guess the two don't necessarily go hand-in-hand. Anyway, he was in ballroom class with all of us (Andrew, Jake, and me (and everyone else in the class)).

Around Christmas time, I went to Jake's house for a party (and after-party, maybe, for some sort of drama thing, probably?) and his mom had been decorating for Christmas while he and Sebastian had been out of the house. So our little group walked into the house and Sebastian exclaimed, "Oh, vau! Look at the vonderful willage!"

And that's just the kind of thing that you can't unhear. It's permanently imprinted on my brain. But I'm really, truly grateful for my own vonderful willage!
Posted by Nancy at 2:21 AM