Just a few days before Alexander was born we went on a walk to the train tracks and for the very first time (that we had all the kids with us (Andrew, Zoë, and I walked along beside one while the other kids were in Grover)), a train came by. You guys, these tracks are pretty active. We can feel (and hear) trains rumbling by all day (and night) long (I joke that if there's ever an earthquake we won't even know because we'll just figure it's another train), so you'd figure that we'd have the pleasure of watching the trains go by more often than we have.

At least, I've figured it.

We've walked to the train tracks several times a week the whole time we've lived here. I've taken the kids to the little park by the tracks and we've camped out with picnics and outside activities just waiting for a train to come by. One little boy in particular (ahem, Benjamin) has been hoping to see a watch a train go by with all of his little boy heart. Yet every day he remained disappointed.

He was over the moon when we walked past the tracks at just the right moment. He stood at the fence and jumped for joy the whole time the train was passing. It didn't take long—it was just an engine and a caboose, the shortest train in history—but it was a rather thrilling moment for him.

After the train passed, he ran around and gave everyone a big hug.

Well, yesterday, I took the kids for a walk to the train tracks again and this time they saw an honest-to-goodness train—complete with 32 cars—which was way more exciting than the first train we managed to spot. 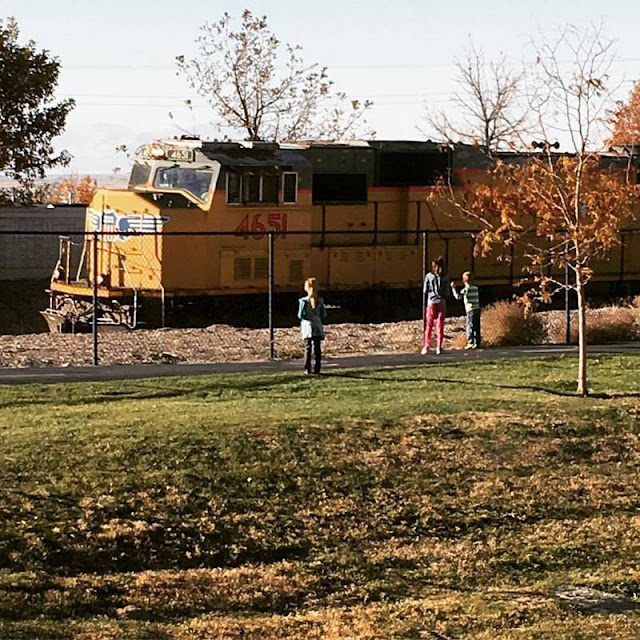 After letting the kids run themselves ragged in the field, we headed back home to make dinner. Zoë had decided to walk because I had Alexander in the sling carrier and didn't think I could push the stroller, too (I really need him in a wrap to do that), and she didn't want anyone else to push her (not that she's picky or anything). She did great on the way to the park. She did less great on the way home.

In order to help her along, Miriam and Rachel grabbed her hands and played, "One, two, three, swing!" with her. And they didn't even yank her arms out of socket or anything. Benjamin alternated between trailing along behind, cheering them on, and running up in front, trying to get kicked during Zoë's upswing. They were all having a wonderful time (and the fall leaves are to die for right now). 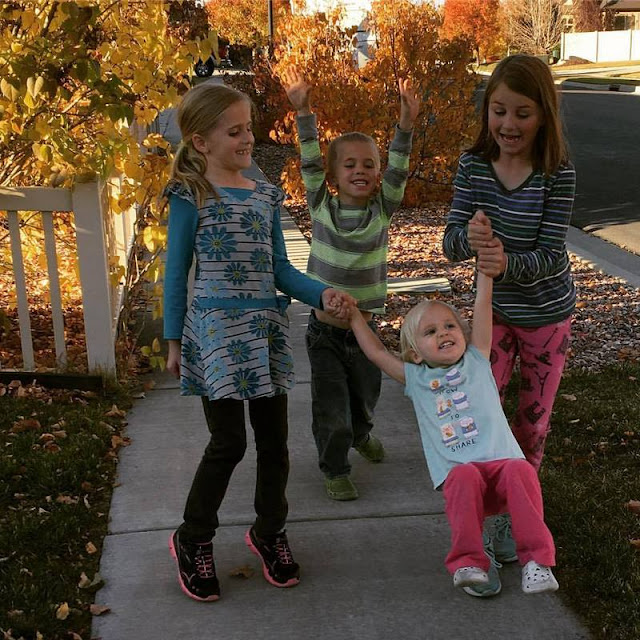 I feel like walking that far was good for me, but I also kind of felt like my pelvis was going to crack in two by the time we got home.

It made me think of when my brother David came out to visit soon after Zoë had been born and we were going on increasingly lengthy family walks to help me get my endurance back. Well, the first night we went walking with David we went for our "two speed bump" walk. Getting out to the second speed bump was fine. Coming home was less fine.

I had to hand Zoë off and was almost ready to lie down and die by the time we got home.

David was like, "Wow. You must be pretty out of shape. That wasn't a long walk at all."

Let's just say, he's lucky that I was so worn out because if I hadn't been...oh, boy!

Instead I just said something like, "Uh, I just had a baby. The mailbox is a long walk, so..."

Hats off to those pioneer women who gave birth while crossing the plains.
Posted by Nancy at 2:10 AM