Somehow or another, Alexander turned four yesterday! I had a doctor appointment in the afternoon so we opened his presents in the morning (which he declared his favourite part of the day) so that he could have the full day to enjoy them. 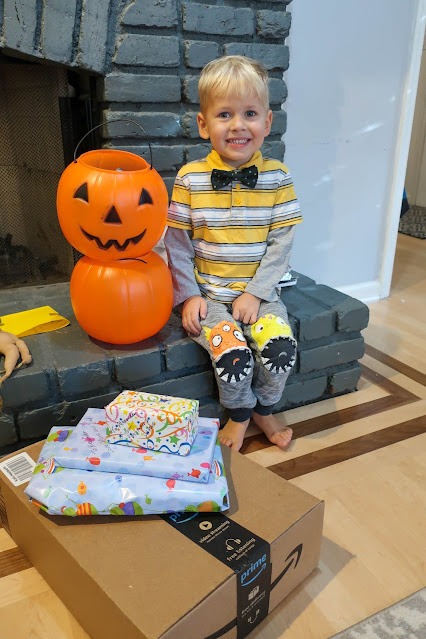 He was extremely excited that it was his birthday: 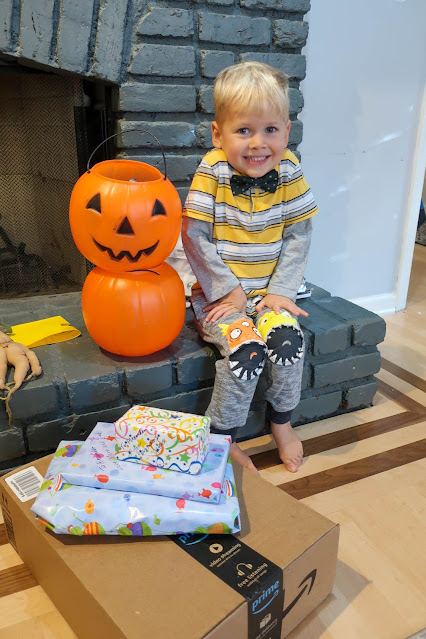 And he made so many ridiculous faces while he opened presents, which means there are many pictures of him going through this process. He was having a bit of a Clark Kent moment with his first present, struggling to tear even the smallest bits of wrapping paper off (there's this one scene from one of the Superman movies or shows that stands out in my brain as the quintessential Clark Kent and it's where he's struggles to rip an envelope (a birthday card?) in half). Watching him struggle was so sweet... 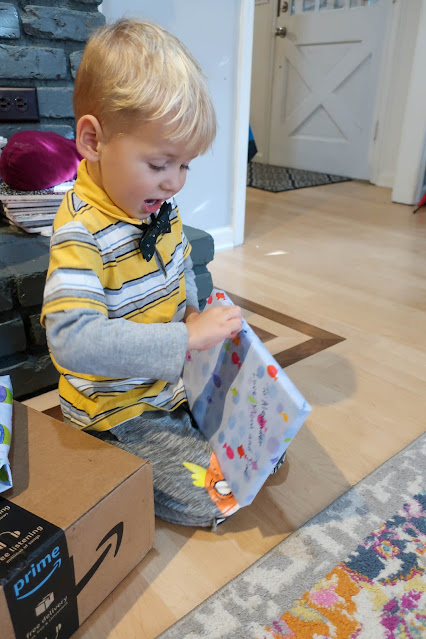 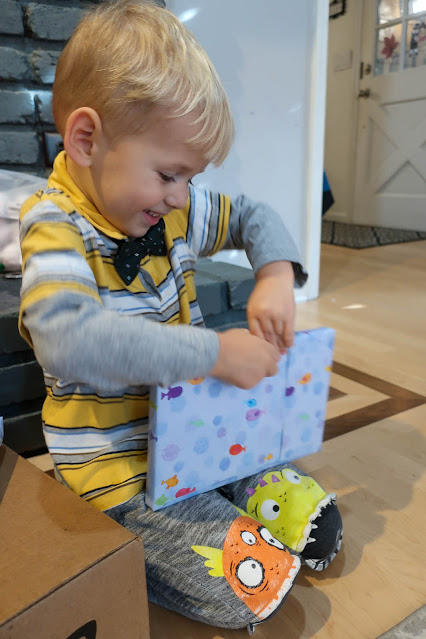 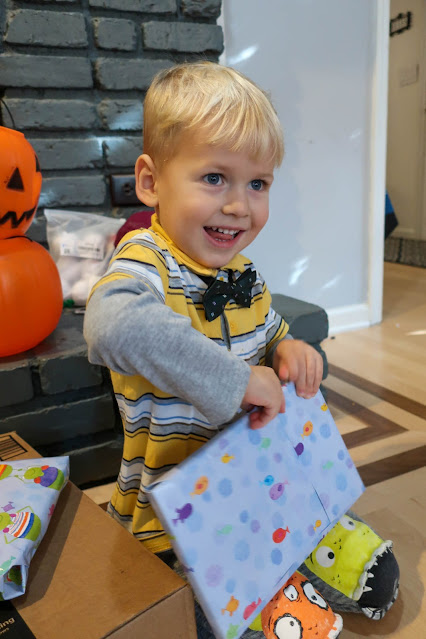 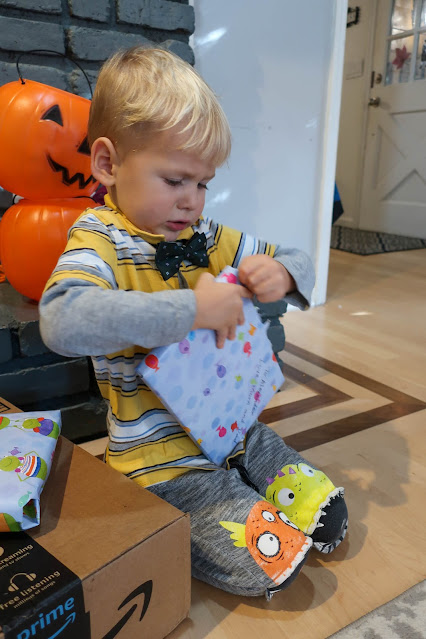 He finally got a good rip going and discovered that—gasp!—it's a new Daniel Tiger book! 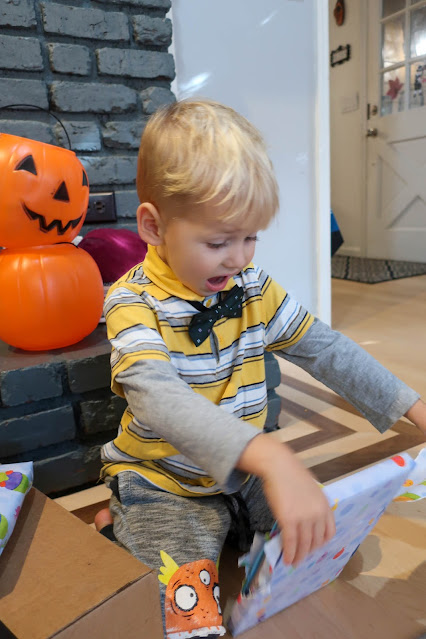 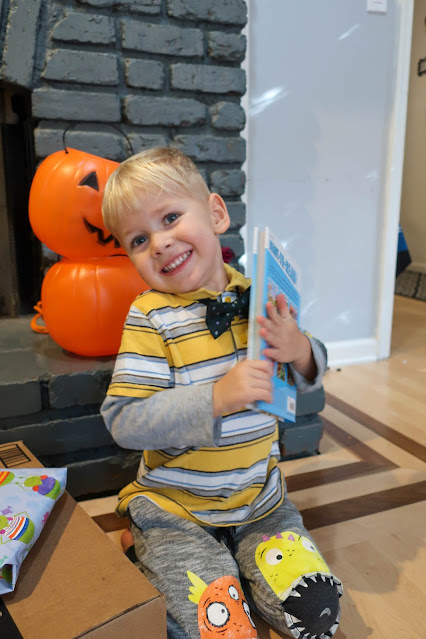 He was very excited to get to add it to his shelf. We recently did a little bedroom shuffling, moving the boys in together and putting Zoë on her own (for now...until Phoebe inevitably joins her) and this included moving the shelf of board books into Zoë's room, thus out of Alexander's room. He was heartbroken because now there "were not stories for [him]!" But we let him choose a shelf on the big bookshelf in his room and stocked it with early readers and he's been in heaven.

He's really outgrown the need for board books. As well as a bunch of other things.

It's wild to think about how fast that happened, in retrospect.

Someone once told me that once the first child starts doing something the rest of them fall like dominoes, and it's true! It seems to take forever for that first day of school, the first loose tooth, the first whatever. But then it happens and all of a sudden you're like, "What do you mean you're ready for early readers?! Weren't you just born?"

And you have a child in high school taking dual enrollment courses and talking about college.

My sister Kelli sent a package addressed to "Alexander the Great Heiss," which Alexander lugged into the house from the front porch and declared that he was going to open the Amazon box for once because he never gets to!

"Nope!" he said, very sure of his decision. "I just want to open the Amazon box."

So we left that Amazon box sitting in the music room—evoking curiosity—until his birthday. He was very excited about this present as well and chose to open it next. I had to give him a little help because opening Amazon boxes can be tough at times (for a four-year-old (or a thirty-six-year-old, I hear)). 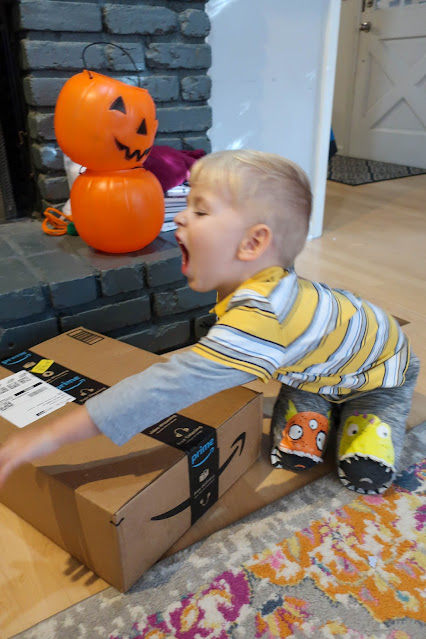 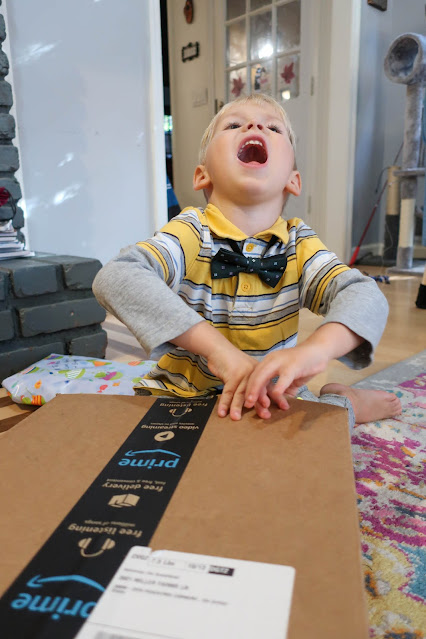 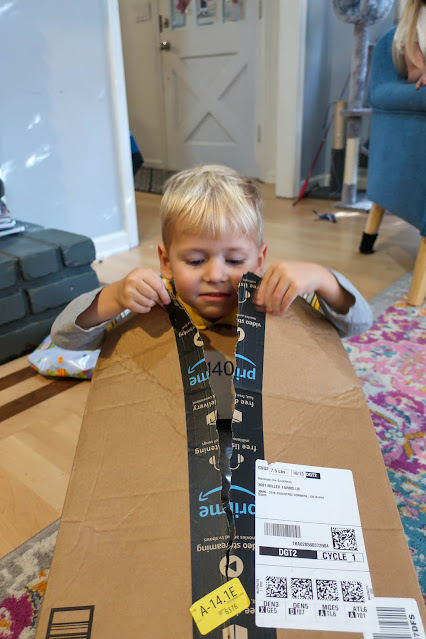 She sent an amazing fort-building set and after all the presents were open we set to work building a little fort to sit in during our reading time. 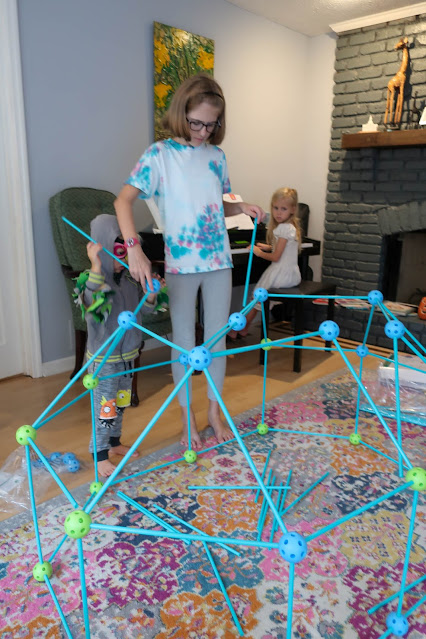 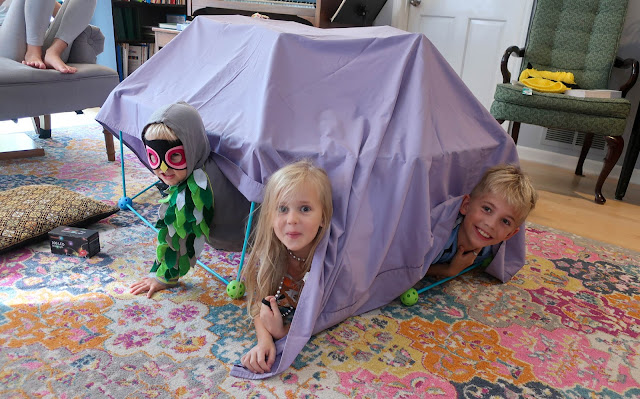 Up next was a set of animal masks from Naanii (which have been a huge hit): 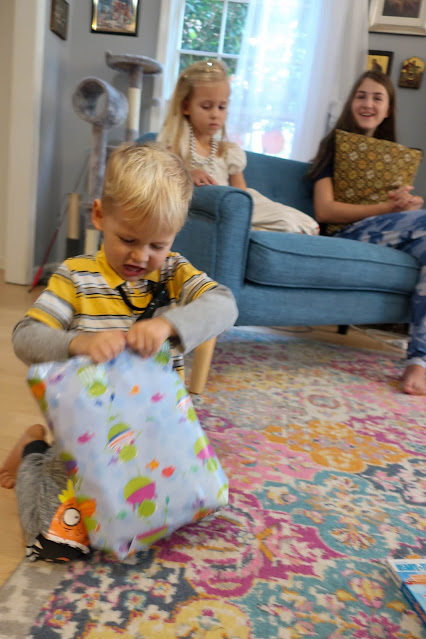 By this point in the game Alexander had gotten the hang of how to unwrap presents... 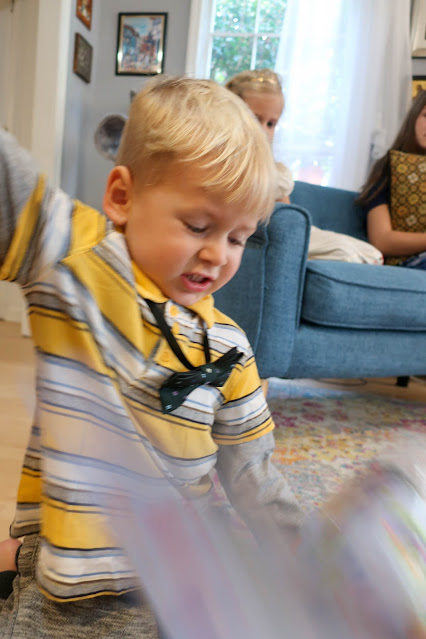 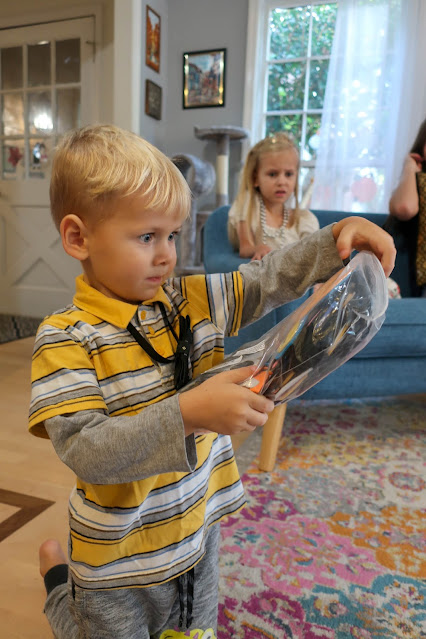 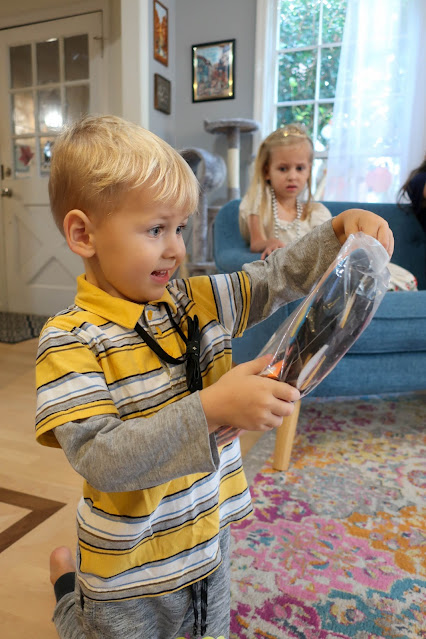 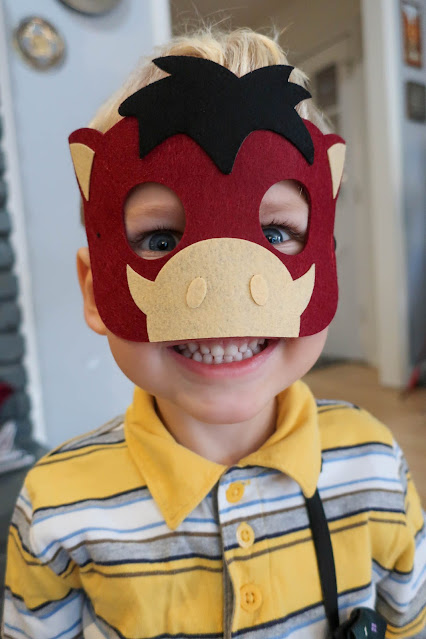 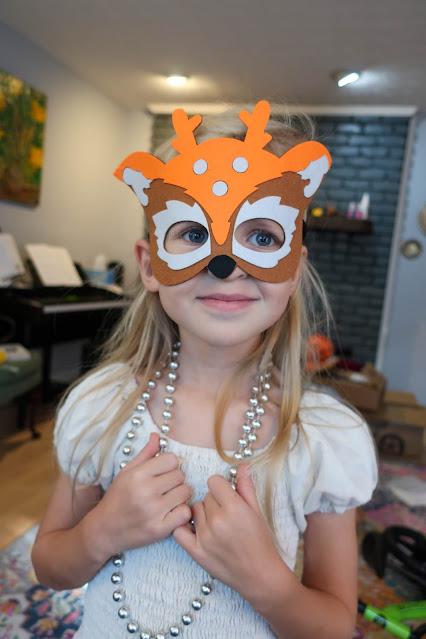 His last present was a balance bike, which I bought used on Amazon...but which came brand new and unassembled (which was a bit of a surprise; we were sure glad all the parts were there)! He doesn't love it quite yet because there's a bit of a learning curve and he doesn't enjoy being on the learning curve. He likes mastery. So it was a little tricky for him outside and he wanted his tricycle back, but I think he'll be zooming around in no time...if he gives it a little more practice. 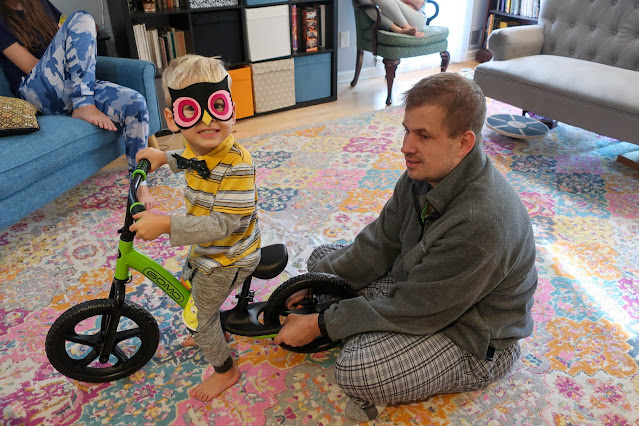 It was 85°F outside yesterday afternoon and he insisted on going outside dressed (more or less...because he switched masks before we headed out) like this: 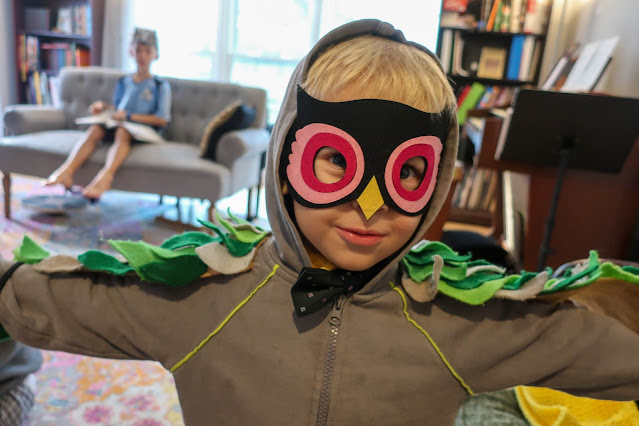 That may have also contributed to his unenthusiastic bike riding. I did eventually convince him (force him?) to take off his sweater because that poor little boy was sweating like a pig! 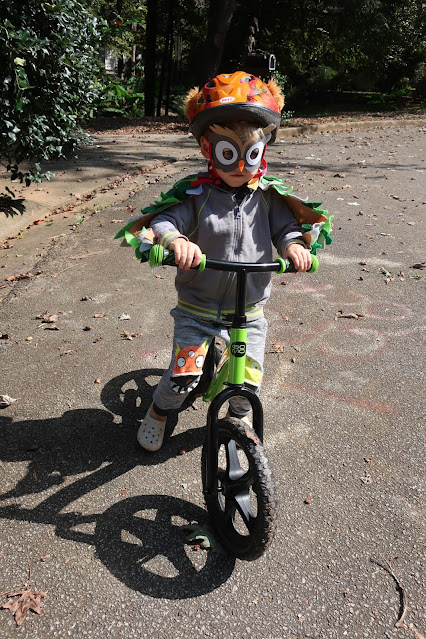 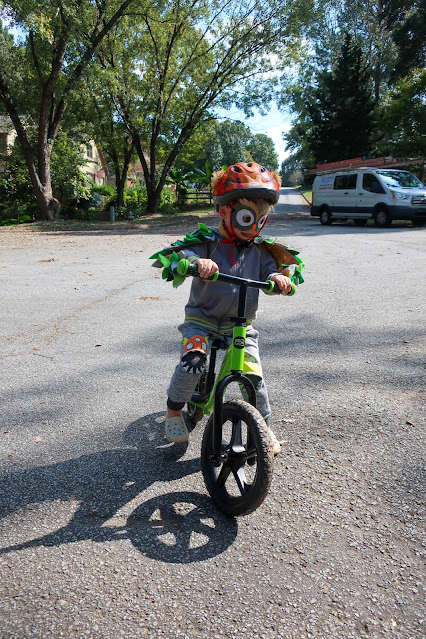 Here he is saying hello: 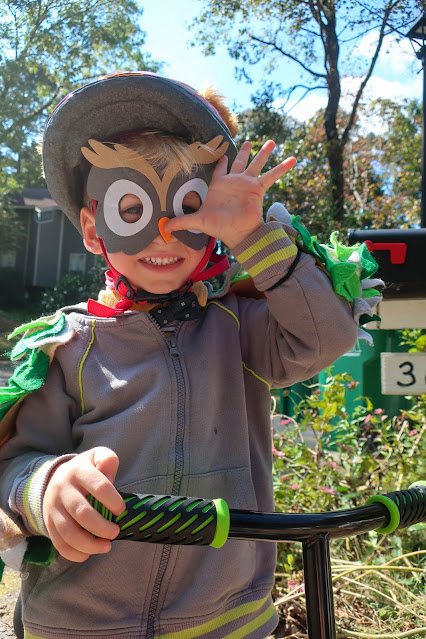 He had a wonderful birthday day. We'll get to his birthday evening soon!
Posted by Nancy at 9:37 PM