I hemmed and hawed over Halloween quite a bit this year. Last year we dressed up and went to the church drive-through party, but then hunkered down in the basement and didn't go trick-or-treating or anything. This year we skipped the ward Halloween party because I couldn't imagine milling about and socializing with that many people right now (though are numbers are getting better...I just couldn't bring myself to...perhaps once I get my booster and am no longer pregnant/diabetic...but then I'll have a newborn so, like...) but we did go trick-or-treating.

Most of our costumes were simply pulled from the dress-up box, which, thankfully, is overflowing after years and years of dressing up. Alexander couldn't make up his mind about what he wanted to be so I wasn't going to waste any time making him anything special for the occasion. At various points he wanted to be an owl, Batman, Superman, Spiderman, a knight, a dinosaur...you get the idea. I think he spent most of the month in costume some way or another.

In the end he settled on being Harry Potter, though he didn't commit to that plan until this morning!

He was a very cute Harry/human Hogwarts student (Miriam made those glasses for him). 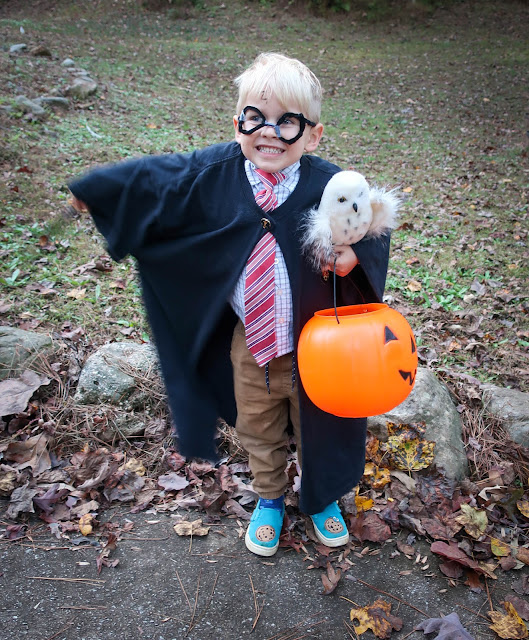 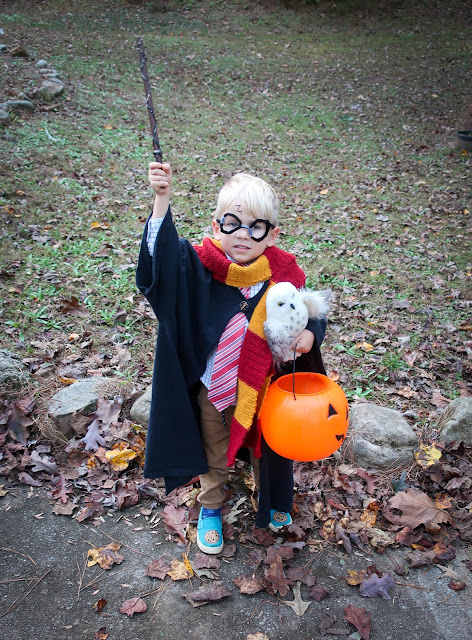 He "stupified" all the neighbours (that's a stunning spell from Harry Potter). 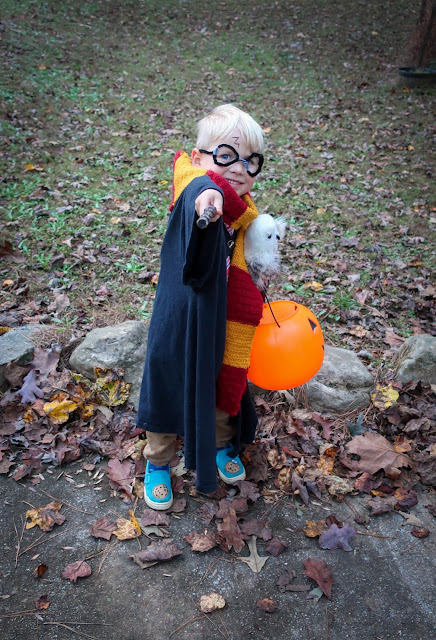 Alexander was so excited about the idea of trick-or-treating. He'd gone when he was too babyish to remember so everything he knew he had learned from stories. He explained it saying that we go around and knock on our neighbours' doors and call out, "Trick or treat!" and then "humans randomly come out of no where and give you candy!" 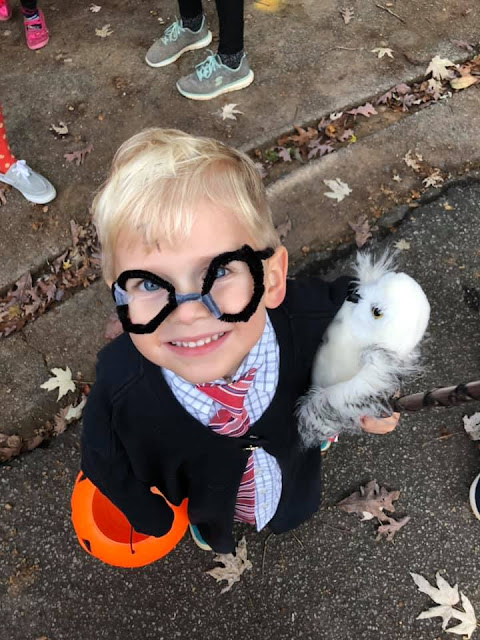 It sounded like a great idea to him!
Also, we have not been able to break him of the habit of calling people "humans," which I guess, technically speaking, they are. But we don't typically go around using the word human a whole lot.
This evening one of our teen-neighbours was dressed up in a rather scary costume. He was unrecognizable to us—he had a scary mask on—but he walked towards up and then stopped and cocked his head to the side as if he were staring at us.
Alexander was spooked, but brave.
"I know you're an act-lull-lull human!" he yelled at the spectre. Then he grabbed my hand and started marching away from the creature as fast as he could, saying, "I know that's an act-lull-lull human. It's not a monster. It's just a human."
We later determined that the monster was our friend Cole. But only because we later saw him walking with his mom and sister (who were recognizable as actual humans).
Here's Zoë as Pikachu: 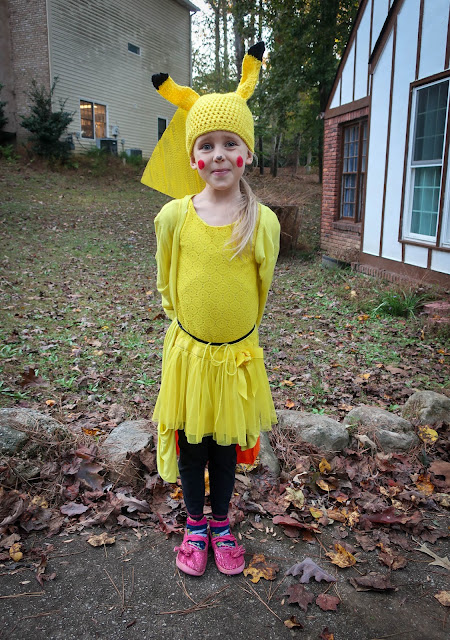 She decided on this after we got some Pokemon books from a friend. Reading the books led to watching the show, which led to her falling in love with Pikachu (who is pretty cute). I whipped up the hat for her and then we made her tail together at the last minute...painting it this morning. 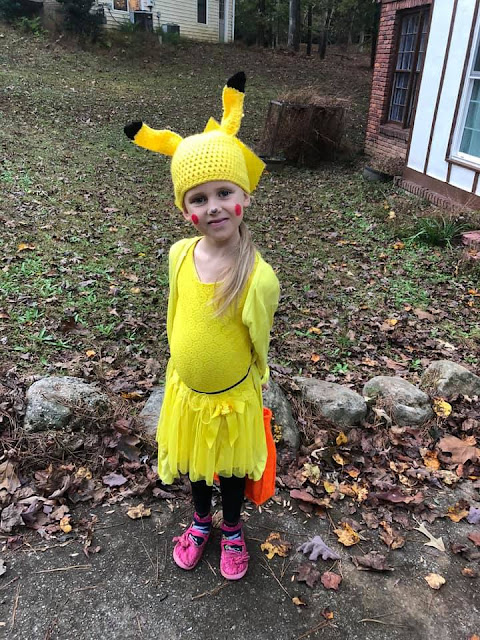 It was still wet early this evening, but Andrew had just finished roasting pumpkin seeds so I stuck her tail in the oven and baked it until it was dry! It didn't last very long (I ended up wearing Alexander's Gryffindor scarf and carrying Zoë's Pikachu tail) but at least she had it for a moment. She was a cute little Pikachu...even if she did wipe her red checks on the yellow sweater she borrowed from me (it was a little chilly this evening and she absolutely couldn't wear anything but yellow).
Benjamin decided on being a Creeper for Halloween way back in June when he got this sweater for his birthday, so his costume was easy. He wanted pants that were a lighter green than the ones he ended up wearing but I couldn't find any anywhere so he made due with what he had. 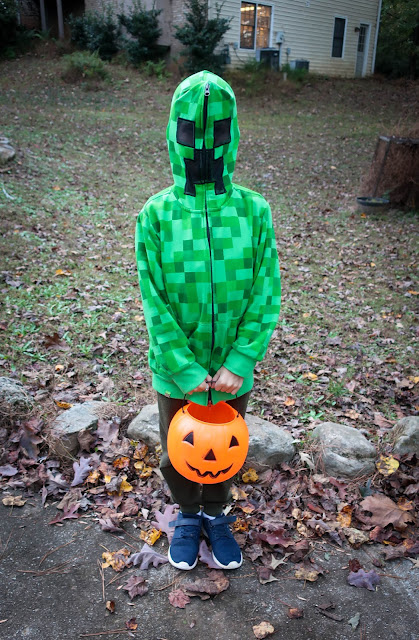 His costume was, by far, the easiest (probably because it came from a store). 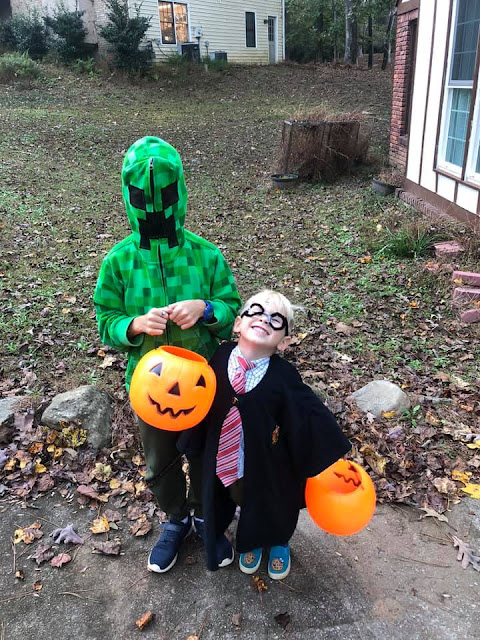 Miriam and Rachel hardly thought about costumes at all this year. They came up with their costumes between yesterday afternoon (for Miriam) and...as we were walking out the door to go trick-or-treating (for Rachel). I guess they're aging out of this dressing up business.
Miriam ended up being Velma from Scooby Doo. 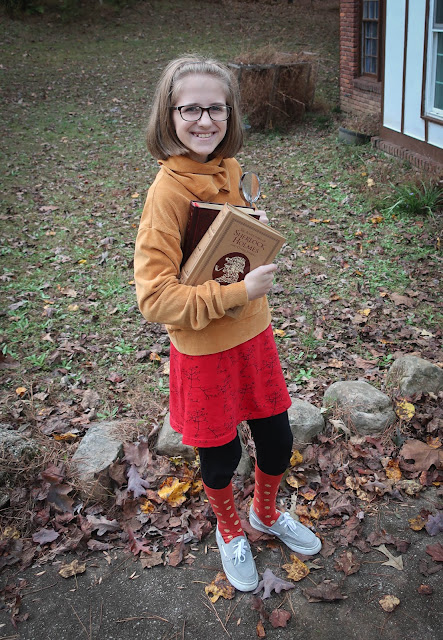 And Rachel ended up being a generic witch (but a lot of people assumed she was Professor McGonagall from Harry Potter). She borrowed one of my sweaters for her costume and Andrew about had a conniption fit over it.
"Rachel is wearing your sweater," he informed me.
"I know," I said. "I let her borrow it."
"It. Fits. Her."
"Mmmmmhmmm..."
"Our child is wearing your clothes."
"Yes. She's an adult-sized human now."
I mean, her feet have been bigger than mine for several years now so I'm completely unsurprised that's she's about caught up to me in height and weight by now. It's a thing that happens. But I guess it caught Andrew off guard a little bit...even though she has also borrowed my clothes for orchestra concerts and things...? 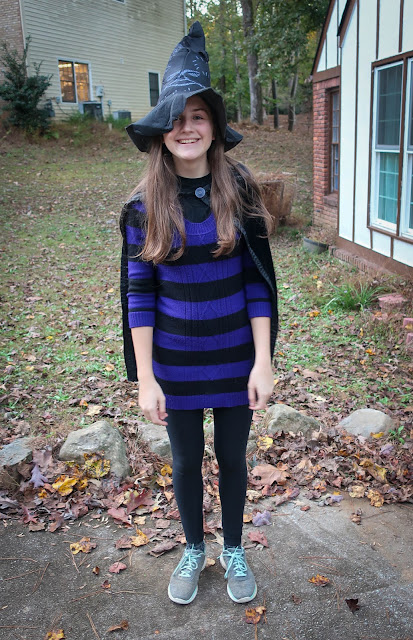 Here's a side-by-side comparison of Rachel and I dressing up as the same generic witch (more or less) three years apart: 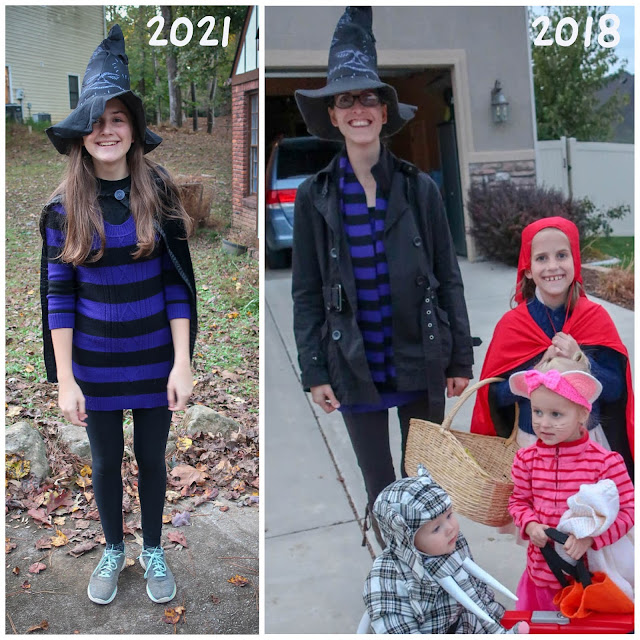 And here's Rachel lugging a few of our jack-o-lanterns to the top of our driveway where we set up our little trick-or-treating booth (which we left Andrew home to man) so kids didn't have to trip down our perilous driveway in the dark. 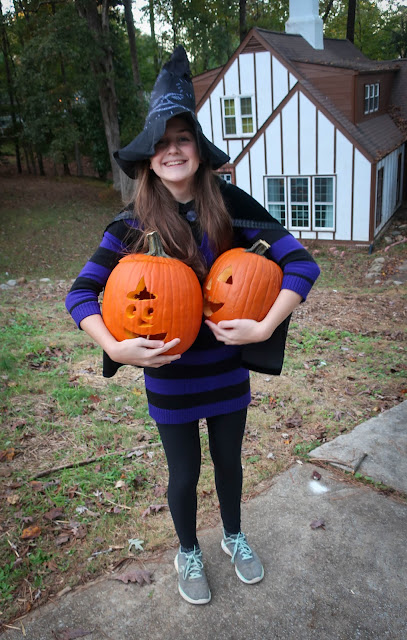 I decided at the last minute that I should probably dress up as something as well so that Phoebe could participate in this year's Halloween celebrations. So I sewed some felt pieces onto my shirt (while I was wearing it, which was a trick...but which seemed the easiest way to best place them) during zoom church. 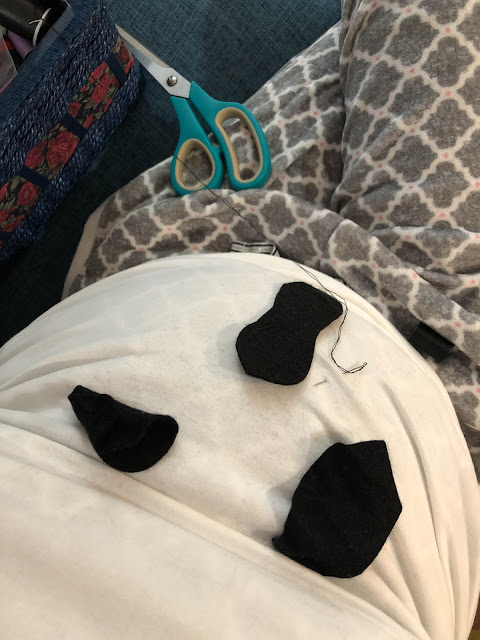 Inappropriate story time: as I was placing the pieces, Benjamin piped up and said, "Oh! You could put the circles on your baby suckers and have those be the eyes!"
We had a little discussion about how nicknames for body parts are...a little rude...and it was decided (by me) that they would not be placed there.
I don't even know why he couldn't come up with a more correct phrasing. He's been reading our Pregnancy: Day by Day reference book religiously lately and has been coming up to me regularly to say that he didn't realize how hard pregnancy was on my body, or how many things could go wrong with Phoebe. The other day he even said, "Women often feel really tired when they're pregnant, so I'll bet your afternoon lie-down feels pretty good and I think you should keep doing that for the rest of your pregnancy, okay?"
Like, twist my arm...
Anyway...here I am...with my ghost costume: 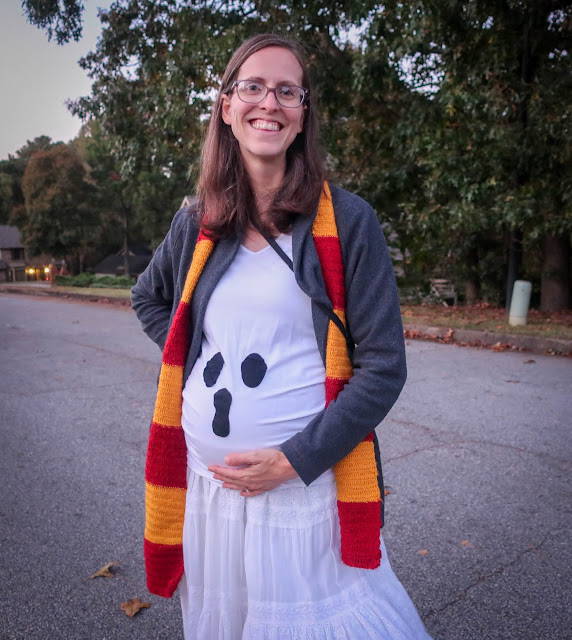 Miriam thought my costume was executed much better this time around than it was when I dressed my belly up as a ghost when she was the one inside it. To be fair, we had limited supplies in Egypt (I didn't know where to buy anything!) so I simply safety-pinned construction paper circles to my shirt that year.
Isn't little pumpkin-Rachel adorable? (Can you believe she's wearing my clothes now?!) 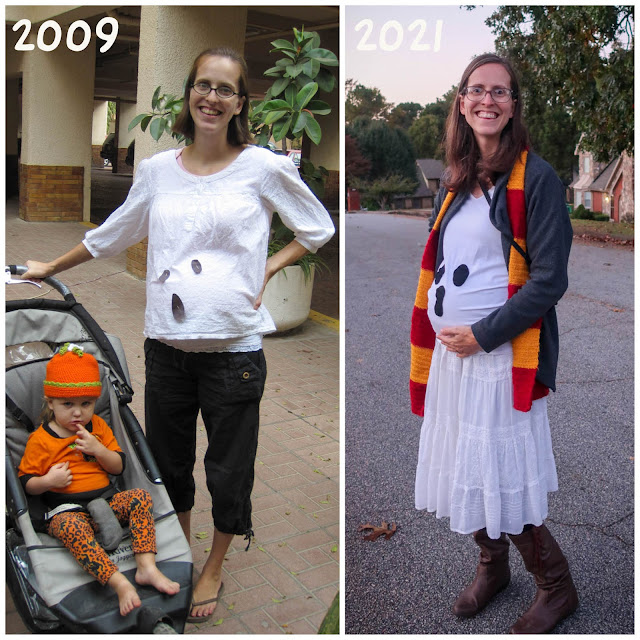 Miriam was born the day after this picture was taken!
That's not the plan with Phoebe. We'll give her a few more weeks.
Here's our costume crew all together: 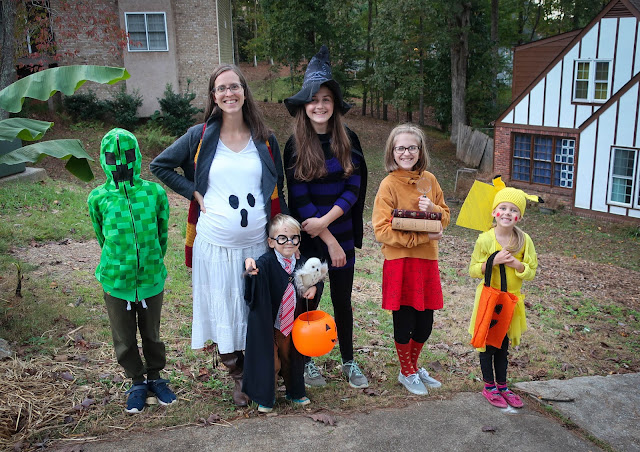 Andrew's not big on dressing up, so he just wore his pyjamas while he sat around waiting for the few trick-or-treaters we ever get. There aren't a ton of kids in our neighbourhood. So we had our little cul-de-sac come by (we were all out at once because that's how we roll) and then Andrew said only about four other kids came. In addition to passing out candy, he was passing out some homemade Oreos that Rachel made (to people we know and who already know they love Rachel's baked goods). 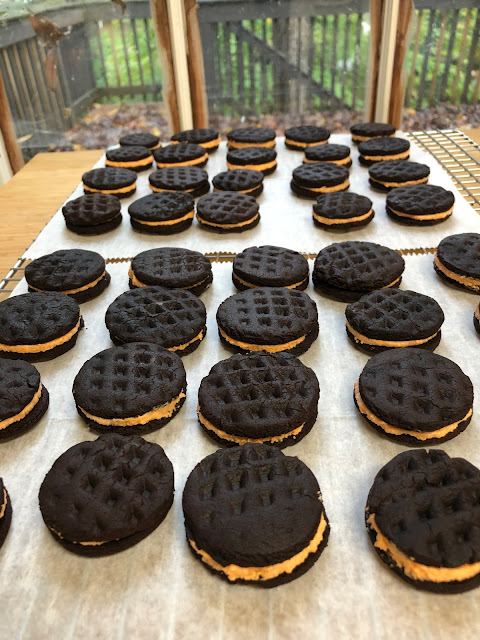 Here are the kids with their pumpkins: 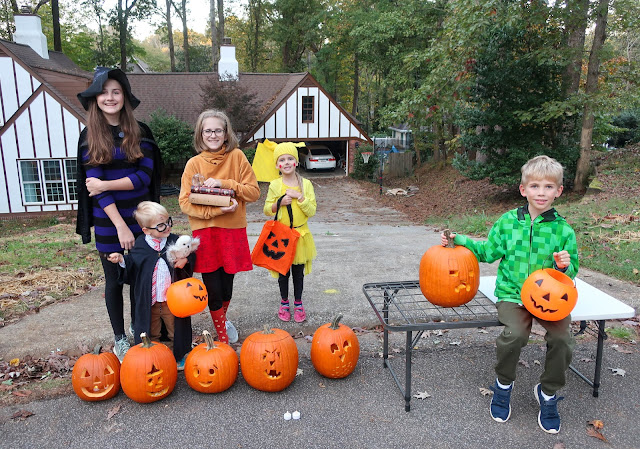 There are six pumpkins because Rachel carved a pumpkin at her young women's activity earlier this week.
Here's the crew out trick-or-treating: 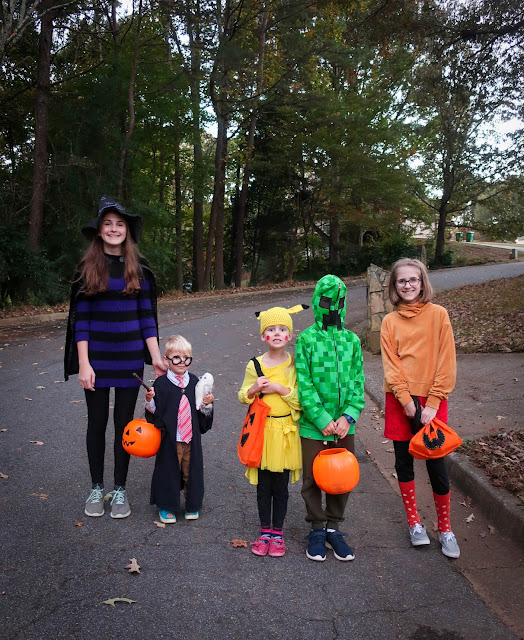 A new set of neighbours just up the street was giving out full-size chocolate bars—and not even just full-size but, like, movie theater-size—and the kids were rather excited to take their pick. They were even more excited when we passed by their house on the way home and they asked us to please come choose another one because they'd only had, like, four other kids come by!
Sounds about right for our neighbourhood.
Here are the kids approaching one of the spookier houses in the neighbourhood: 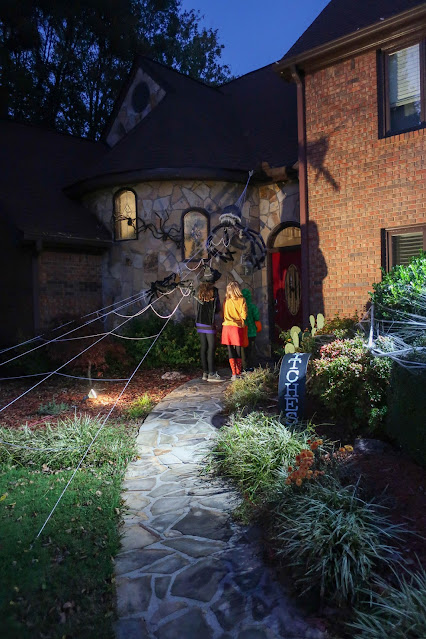 And here they are exploring their haul (some already with full mouths, clearly): 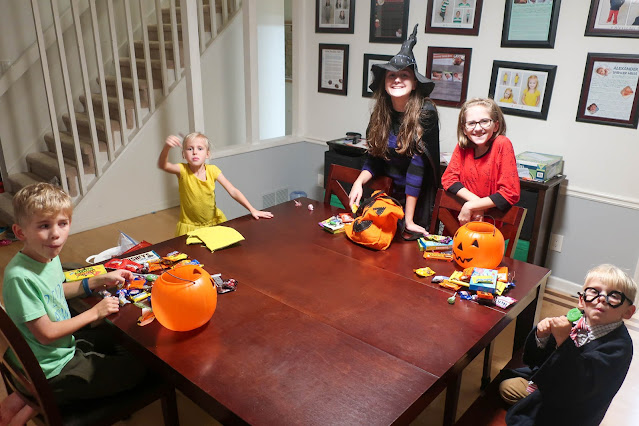 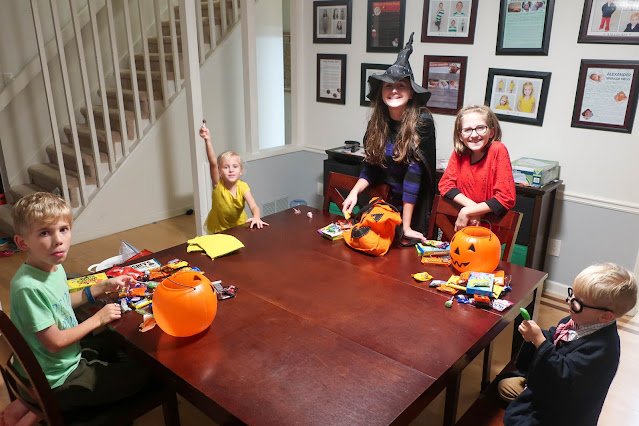 Alexander was very excited about this special monster sucker his friend Zoey picked out for him. Her mom let her choose a special sucker for each of the "cul-de-sac kids" while they were out grocery shopping. The other four trick-or-treaters were stuck with plain, ordinary Halloween candy. 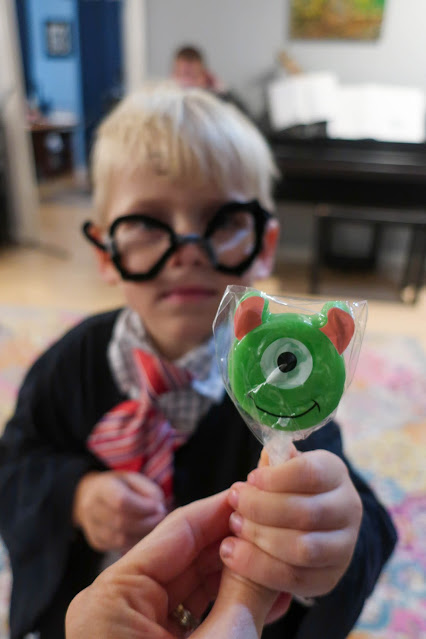 It was a pretty quiet Halloween, which was nice. And even though we didn't do a lot of trick-or-treating (we stayed out for less than one hour), it seemed about the right amount. As we were making our way home, Alexander was melodramatically moaning, "Home now! Home now!" The kids didn't get a huge haul of candy, but that's okay because (a) candy is bad for you, and (b) we have a bunch of candy left over (Andrew will take some to his class tomorrow, but still...we have a bunch of candy left over)!
Naanii called just as we were getting in from being out and was joking to the kids about their teeth rotting out and the importance of brushing really well after eating all those sweets.
The little kids weren't so sure that teeth could just spontaneously rot out of your head, but then Miriam dramatically...lost a tooth...which scared them straight! I've never seen them so eager to brush their teeth!
To be fair, this tooth of Miriam's had been wiggly for quite some time, but it was still pretty funny.
After talking to Naanii and Bumpa, we had a little video chat with Grandpa, and by then it was getting pretty late so Andrew announced that in honour of Halloween we'd be doing memorized scriptures for our scripture study.
"And the one we’re going to start with is…The Word of Wisdom!" he said.
"Daaaaaaaad!" all the kids groaned.
The moments parents live for!
Posted by Nancy at 11:46 PM