Auntie K sent the kids a Halloween activity to do a while ago and we (embarrassingly) just got around to doing it today.

Life's been a little hectic!

But today was "Friday Free Day!" and so I just let the kids have their free time while I worked on my school work and I got a lot accomplished! This week one of my classes didn't have any assignments while another one of my classes posted the rest of the assignments for the semester. So naturally I've spent this week hammering those out so I can have them out of the way. I haven't turned them all in yet, but I have read everything I need to and have written everything I need to and have them queued up to be turned in (I'm going to parcel them out over the next couple of weeks). I finished my final project for another class (though I still have three quizzes left to take, but I have to take those certain days so can't get ahead with those).

Anyway, I was feeling rather on top of things with my school work and though there was more I could have done (and still should probably do before this baby arrives), I decided I could take some time off this afternoon to have fun with the kids. So we painted squishy pumpkins together.

Alexander put this silly face on his pumpkin: 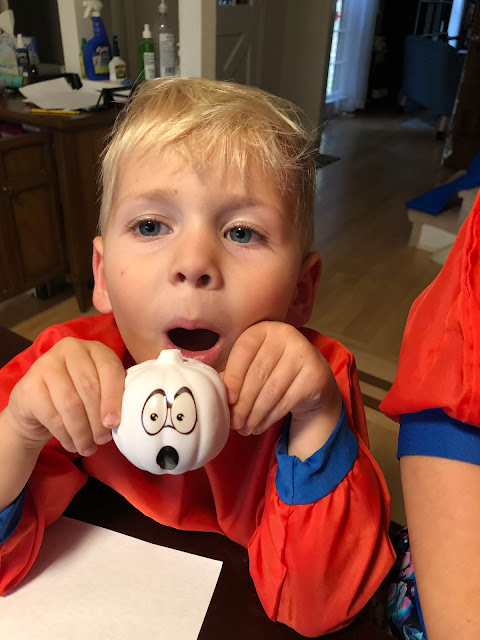 Then he spent a long time deciding what colour he wanted his pumpkin to be before settling on blue because that's his favourite colour (so I'm really not sure why the decision was so difficult for him...except that he's my child so it could just be that hesitancy is in his nature because making decisions is incredibly taxing for me (even decisions like what colour to paint my pumpkin). I took a few pictures of him starting out on his painting journey and sent them to my family's group chat (because we have one of those), making note of how concentrated he is. 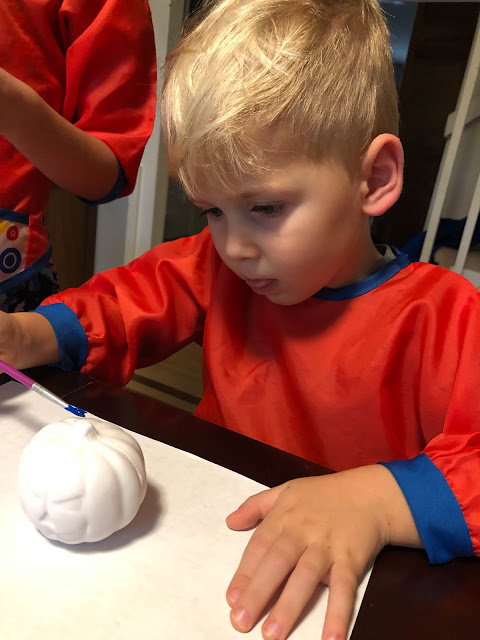 "I know that look!" Patrick said.

That conversation ended with my mom sending this picture of Patrick painting a little clay creation of his from way back in our PoCo days (when Patrick was around Alexander's age) for comparison: 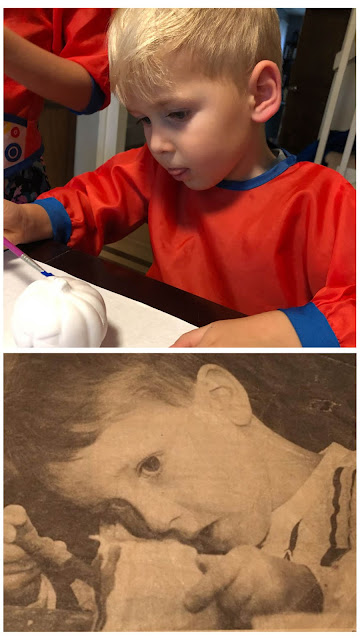 Here's Zoë having a hard time deciding how to paint her pumpkin as well: 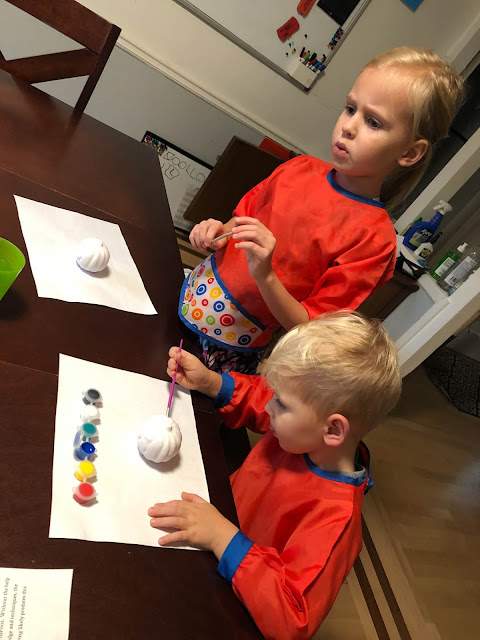 I don't have a good picture of her finished creation, but she ended up making a puppy. She thought it was adorable (and it was) and kept begging people to admire it (so we did). 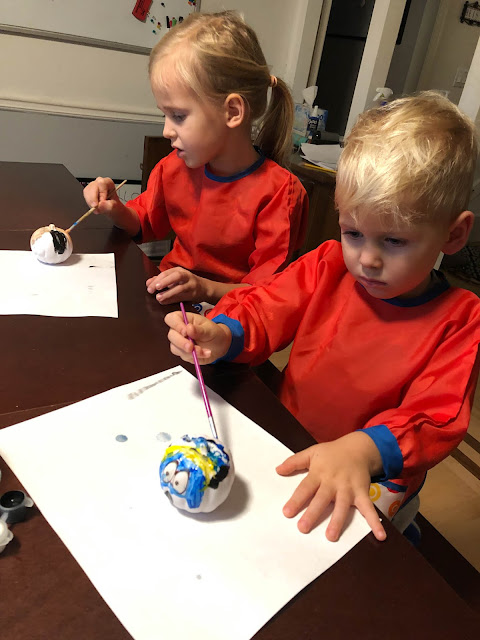 And then, while she was painting the back of her pumpkin, I noticed that her puppy's eyes had...bled...all down the front of her pumpkin.

"What?" Zoë asked, turning her pumpkin around.

Both of us were positive this was going to cause a Zoë meltdown. How could we mitigate this situation?

"Yeah!" Zoë agreed enthusiastically. "FROM HAPPINESS! Because it's so cute! If I were this cute I would also cry!"

Here she is making a green field for her so-adorable-it's-going-to-cry puppy to frolic in, with Miriam just getting started on her pumpkin behind her (because Miriam was off getting vaccinated and meeting her new organ teacher, so she joined in a little late): 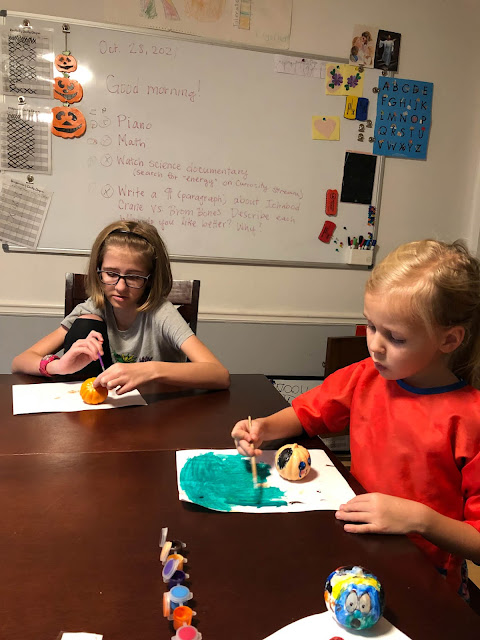 So, funny story about Miriam meeting her organ teacher...

Organ teachers are usually quite thrilled to get young organ students, at least from our experience having sought out two (2) whole organ teachers. Often, at least from our experience, this young pupil is their only organ student and everyone else is on voice or piano or something. Somehow, even though Miriam's teacher recommended her to her teacher and her teacher to us, not a lot was communicated about Miriam's abilities, so her new teacher asked her if she would play her a piece.

Miriam agreed, but looked timid and afraid (because she's my child; that, again, should about explain her behaviour), so the organ teacher asked her if her former teacher usually set the stops for her and Miriam shyly nodded.

So this new organ teacher dove right into an organ tutorial.

"This main keyboard is your manual. This other keyboard is the swell. Let's find a good flute for you and we'll add..." she went on showing Miriam around the organ and setting stops and then invited Miriam to play.

So Miriam sat down and played Rondeau by Mouret:

And her new teacher was like, "Okay, so I assume you do know a little something about stops... Do you have anything else memorized?"
So then Miriam started playing Toccata and Fugue by Bach and her teacher gasped and said, "I didn't memorize that until I was a sophomore in college."
"Well, I don't have the last couple of pages memorized yet," Miriam said.
"When did you start memorizing it?" her teacher asked.
"Oh...mid-July...or something," Miriam said.
"Mid-July," her teacher said, giving her head a gentle shake. "That's like 3 or 4 months. I just..."
Anyway, she seemed pretty excited to take Miriam on as a student and wants Miriam to bring all her music with her to her next lesson so they can talk about what she's done and where she wants to go next. And her teacher not only has like seven pianos and two organs in her house...she also has a harpsichord.
Miriam's really hoping she'll get a turn on that!
Anyway, back to pumpkin painting... 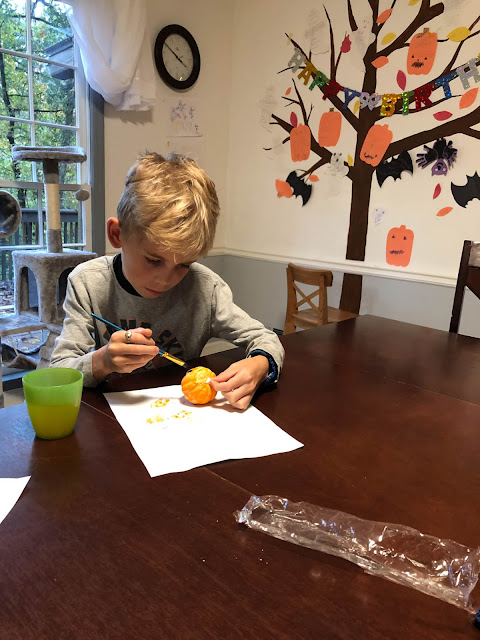 Benjamin was actually more upset about his pumpkin's face running than Zoë was about hers. Sometimes the paint would stick really well and other times...it just would not...and, unfortunately, that black did not want to stay in place at all and Benjamin was pretty upset about it. 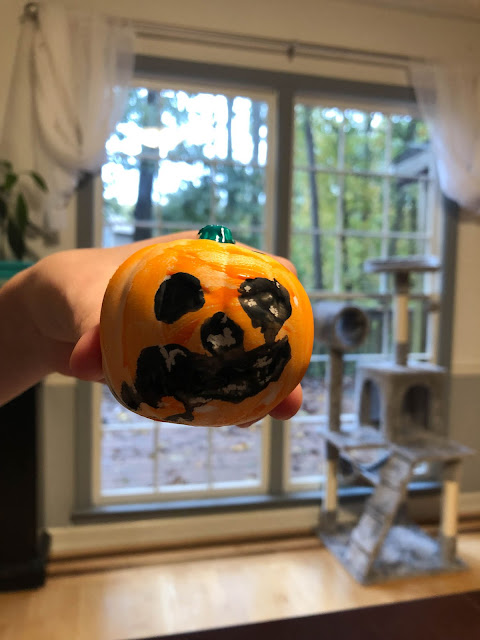 But we were eventually able to convince him that it simply looked extra spooky. 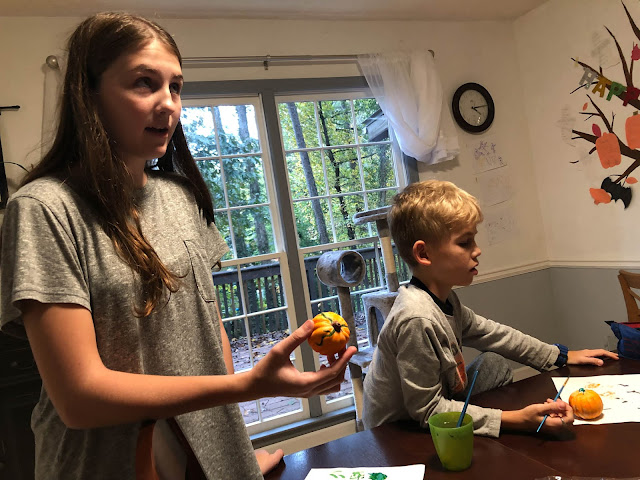 Here's Rachel with her finished pumpkin: 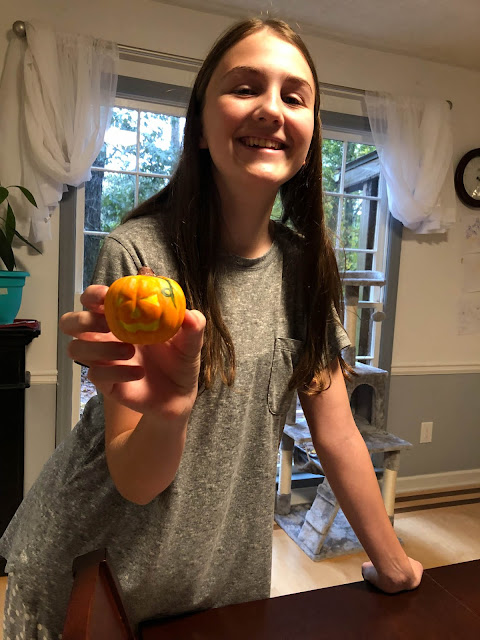 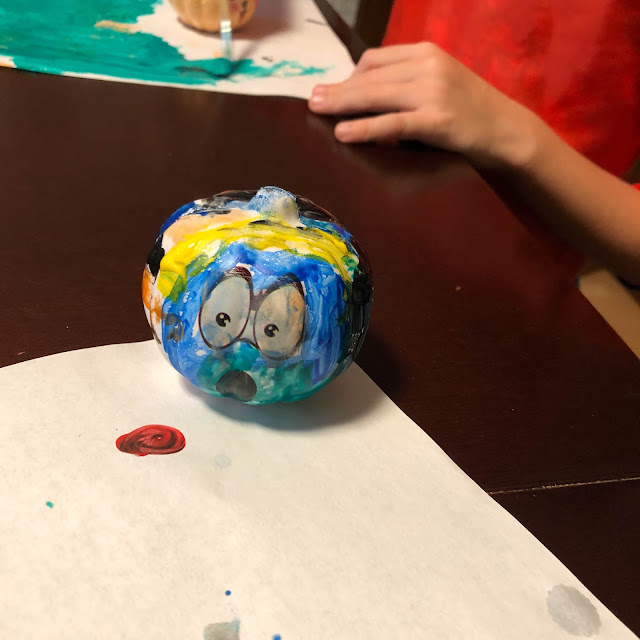 We about had to drag him away from the table—he did not want to stop painting but his pumpkin was downright soggy! I thought it was funny that he took so long to decide on making a blue pumpkin and then proceeded to use just about every colour he could!

Thanks for the fun, Auntie K!