Way back when I first found out I was pregnant and was experiencing All The Emotions, I decided that if I really was doing this again (which evidently we were), then I at least could be cute and comfortable: I was going to buy maternity clothes.
This was a great plan for me...except that I'm frugal to a fault...and spending money is really hard for me. So I was lucky that my neighbour gifted me a bag of maternity clothes because I still couldn't quite bring myself to buy very much, especially because we're really at our caboose now. For real.
Still, I convinced myself to buy a couple pairs of maternity leggings, which was important for me even early on because I think I was the absolute sickest with this pregnancy that I've ever been—throwing up and fainting (which I haven't really ever done during pregnancy before)—and feeling elastic around my waist was just unbearable. So I wouldn't have made it through the first several months of this pregnancy in my regular leggings, even though that's mostly what I wore when I was expecting Alexander and Zoë. But maternity leggings really are more comfortable than non-maternity leggings; that's just a fact (that I know now).
Anyway, I also got a couple of tunics to go with the leggings. They aren't technically maternity shirts, but I have this thing against buying clothes I'm only going to wear for a few months (which is why I haven't ever bought a lot of maternity clothes). Tunics are something I can wear after Baby is here as well. When I was looking at tunics, a lovely fall-striped one caught my eye but I was going to be pregnant mostly through the summer, so getting a long-sleeved tunic sounded like a bad idea. I chose a short-sleeved one instead and I think I've worn it once a week since it arrived. It's very comfortable.
Things have been cooling off recently, however, and I've found myself still thinking about that fall-striped tunic. So I went ahead and ordered it. Because if you've wanted something from April to October, maybe you should just go ahead and get it.
It arrived today and I tried it on and when Alexander saw me his mouth fell open.
"We match!" he managed to squeak out in spite of his excitement, and he ran to give me the biggest hug.
I hadn't planned on wearing the shirt the whole evening, but...I couldn't take it off now!
Alexander rifled through his toy box until he found his sunglasses (so he could match me even further because I have glasses) and insisted that we both wear flip-flops on our walk (because then our shoes would match). He held my hand the whole way (he's only recently given up the stroller—completely cold-turkey, as is his way (one day he was too little to walk the full mile, but the next day he was plenty big, thank you very much)) and whenever a car drove by he would squish up against me and robotically announce, "CONNECT! Nobody can see me. We are camouflaged. CONNECT!"
He's a goofball.
Here he is saying hello to Phoebe, who has made it past the 34-week mark (by one day). Every day we count our lucky stars that she's still baking away. Even though I'm so over being pregnant, I know that she's better off on the inside. 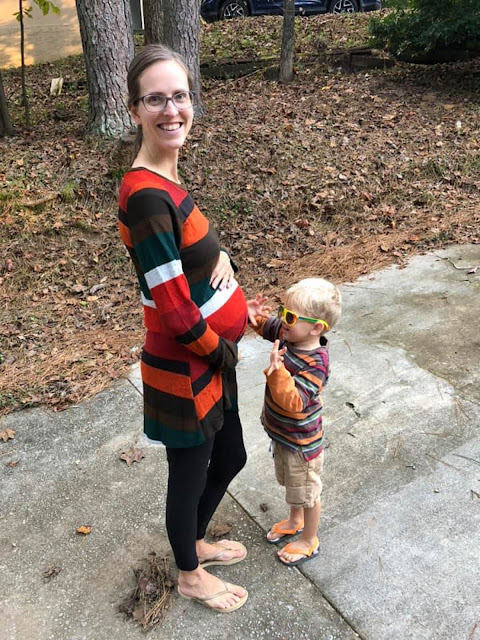 And here's me and Alexander modeling our "matching" shirts together: 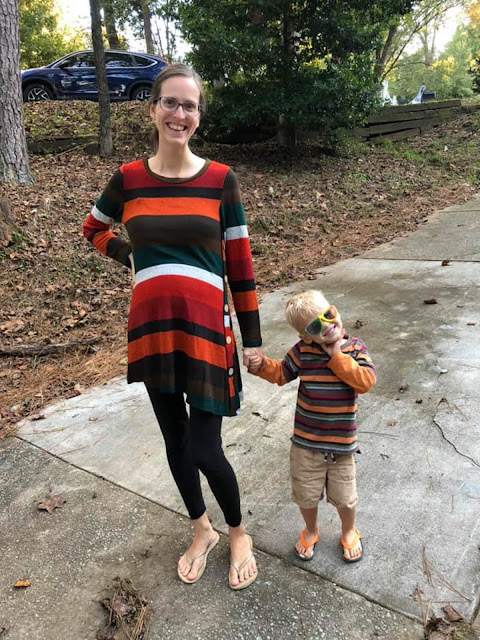 He told Rachel they were our "seven-layer shirts," though I'm not sure his count of the layers is quite accurate. This shirt was worth just this one evening of Alexander being so excited about matching!
Posted by Nancy at 12:32 AM