I took Rachel and Alexander to the doctor this morning; they're both healthy, happy kids, though Rachel's blood pressure was a little high. I pulled out her records from last time and her blood pressure was a little high then, as well. But that's just her anxiety kicking in. She hates needles and knew she had shots coming up.
At 4 years old, Alexander is 39 inches tall (3 feet, 3 inches) and is 31 lbs.
Long and lean, a little on the small side but following the pattern of his growth curve (which is all that we ask for). He was so brave for his shots (he got three today: chicken pox, MMR, and influenza). When the first shot went in his eyes got really wide, when the second shot went in tears sprang to his eyes and he started his nervous giggling, when the third shot went in he continued his nervous giggles and added a little, "OKAY!"
He was so done with that!
The nurse could hardly get his last bandaid on; he was scrambling away from her trying to get into my arms.
"All done!" I said. "You were so brave! And—just think!—you won't have to get another shot until next..."
I was all geared up to say "year" but then I realized that...I sincerely hope...he'll be getting another shot within the year so I finished up with "time" instead.
That sounded far less comforting than I intended it to, but he has no concept of time, anyway.
Rachel actually got her shot first and she did so well. Last night (when she was already nervous about today), she said, "Last time wasn't so bad. And I do so much better than I used to. I haven't bitten a nurse in a long time!"
And it's true. She didn't abuse her nurse one single bit. She just sat on the table and took a deep breath and then it was all over.
I won't reveal her statistics, since I suppose she's entering that age where she gets to choose what information to reveal. Let's just say that when we were discussing her growth curve the doctor said, "As you can see she grew a lot last year and then this past year she grew even more!"
Like Alexander, she's also long and lean. Just about as long and lean as I am! But not quite.
I have a few inches on her yet!
Like...two.
She said she felt bad when the nurse was measuring her because the nurse had to stand on her tiptoes to get Rachel's height.
"I just feel weird being taller than grown ups!" she said.
"Well, you're about grown up size," I said. "This is how tall I was in high school."
But it's true that being grown up-sized is weird when you're still a kid.
The pediatrician we've been seeing the past couple of years retired so this was our first visit with another doctor in the clinic, but I think it went well. He was genuinely shocked that we had three kids between Rachel and Alexander...and that we had another one on the way. He asked me if I was going for a full football team. The answer to that is...no. But we also kind of overshot things for basketball, didn't we? Though I think we're just about right for hockey.
TMI moment: I loved that he was so open about monthly cycles. Like, my doctors never asked about my monthly cycles. This doctor offered Rachel parameters of "normal" and said that if things ever don't seem normal (pain, duration, frequency, etc.) to speak up about it so we can help her. I feel like I was hushed about those things by every doctor I've ever seen. When I would admit to missing school because of losing so much blood I would pass out or having cramps so intense I would vomit and couldn't stand for the pain...doctors have told me to pull up my big girl panties because it's just something all women have to deal with.
But it's NOT.
So maybe one day I'll find a doctor of my own who wants to get to the root of that problem.
First I'll (hopefully) have two blissful years of lactational amenorrhea.
We decided to stop by a playground on the way home because why not? Taking just two kids out felt kind of special. Like one-on-one time...but two-on-one time.
Things were still rather dewy, so the slide was especially slick and the kids flew off the end. 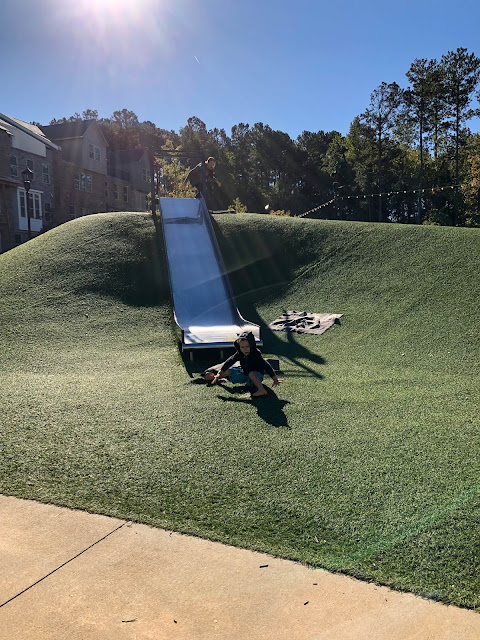 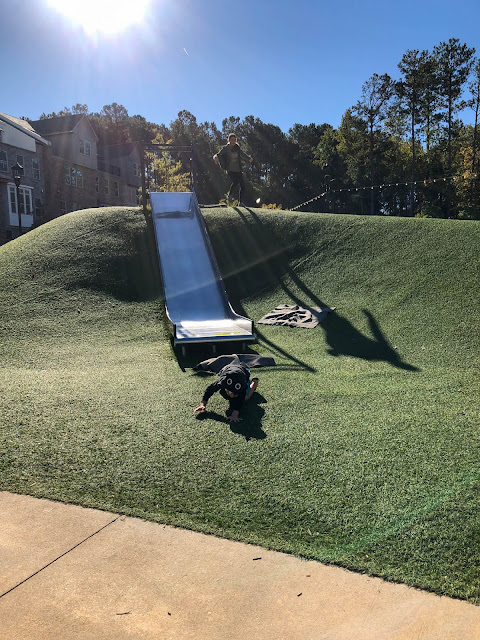 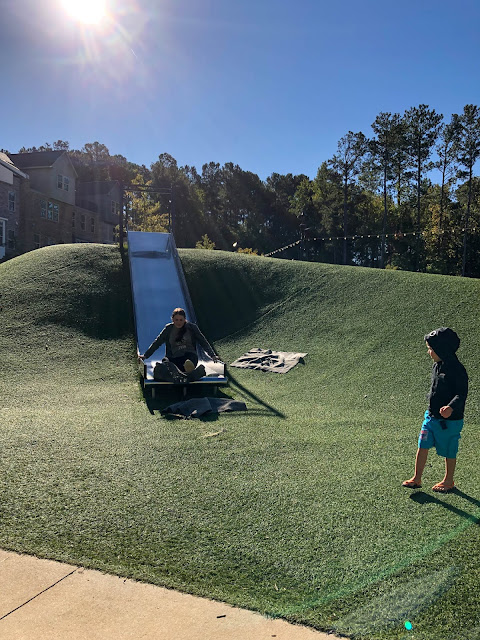 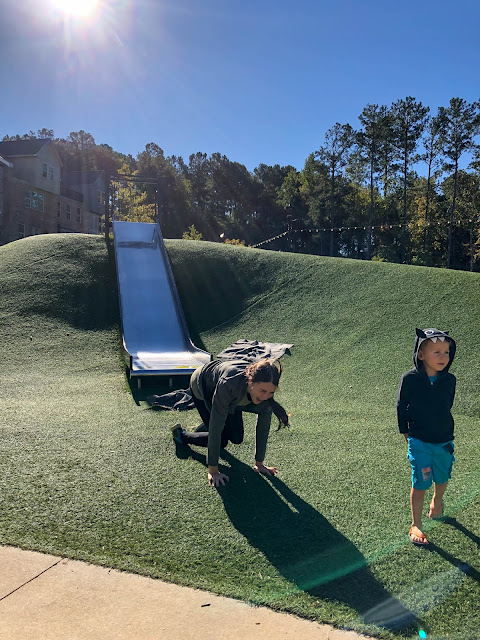 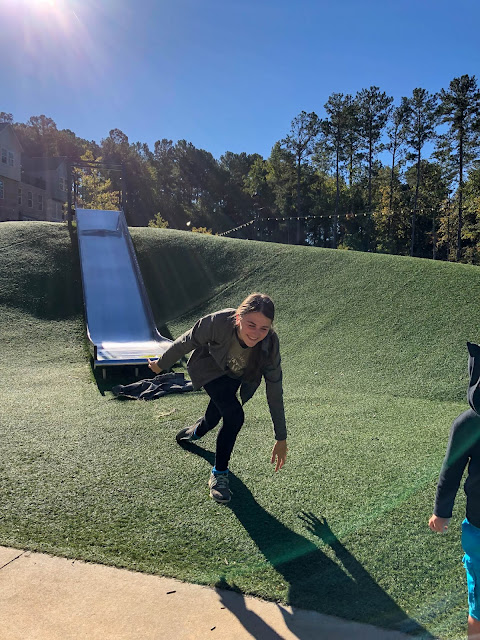 When we were walking to the play area in the woods, Rachel and Alexander started walking through the lawn. I kept to the sidewalk. Because of the dewiness of everything.
"Ugh! My feet are getting all wet!" Rachel remarked.
"That's why I'm on the sidewalk," I said. "The grass is dewy!"
"Well, who took the time to do that?" Rachel asked.
"What?" I asked.
"To organize the grass by subject..."
This girl. She's always coming up with puns (Dewey vs. dewy, in this case). We must be raising her right. 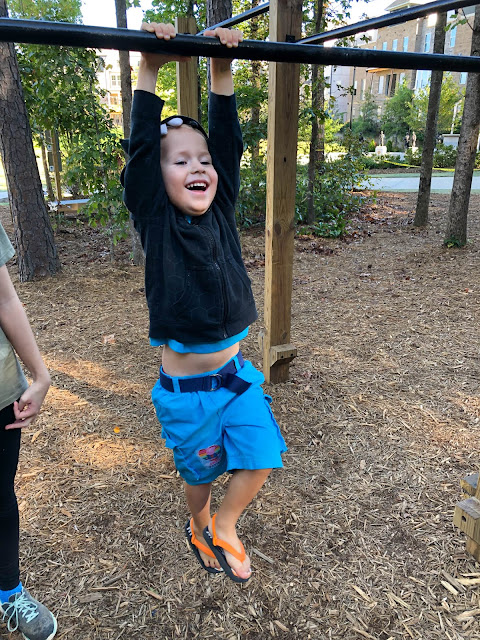 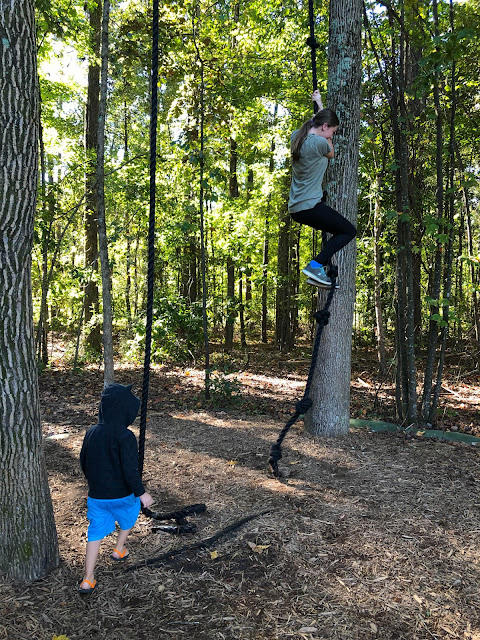 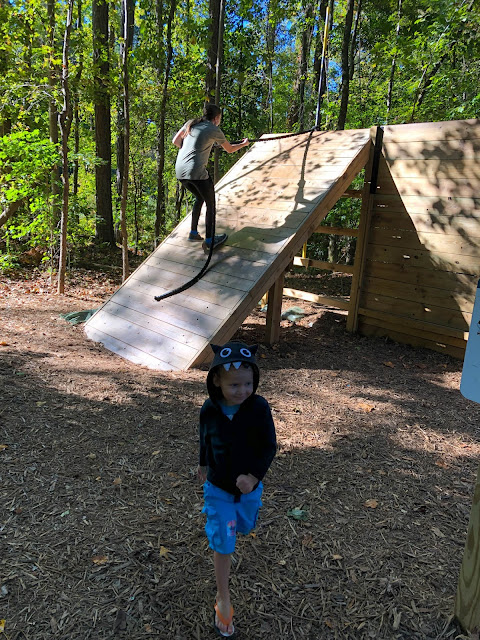 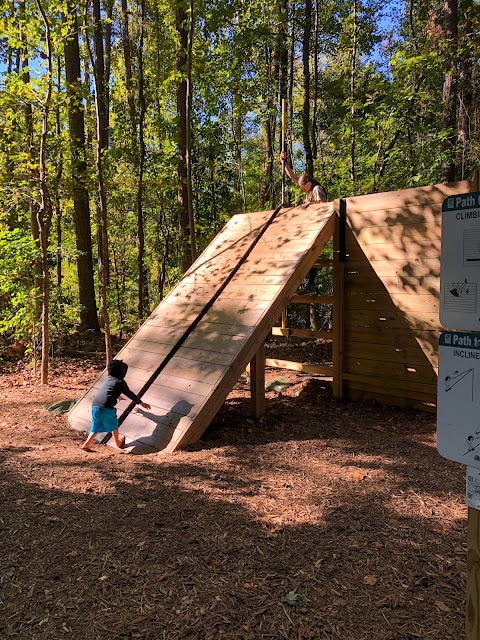 And here are these two doing a little bit more climbing: 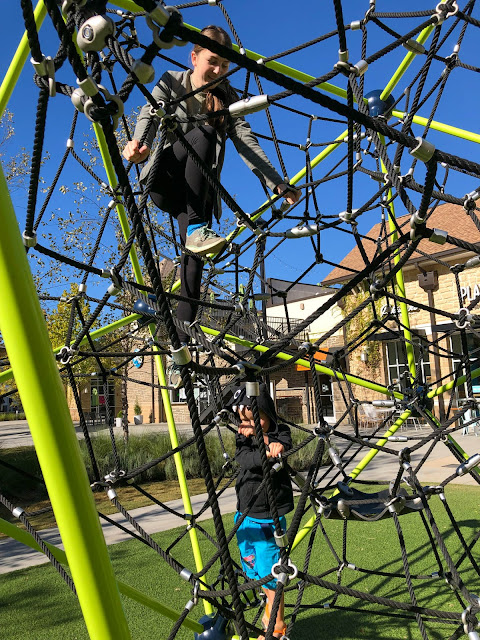 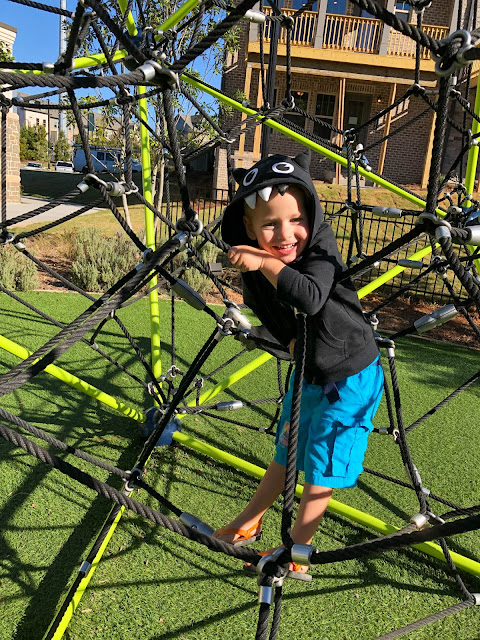 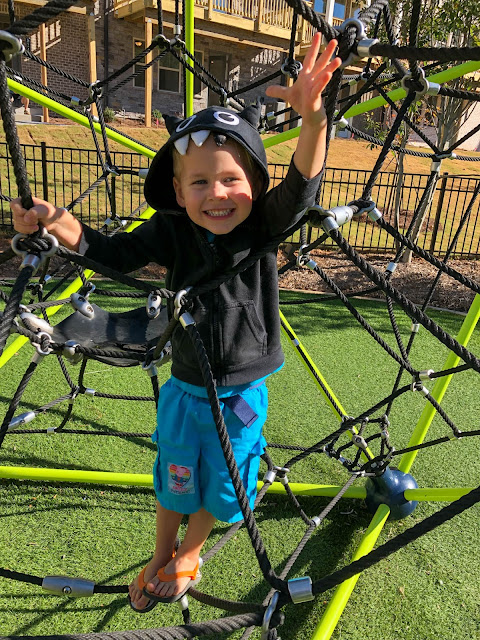 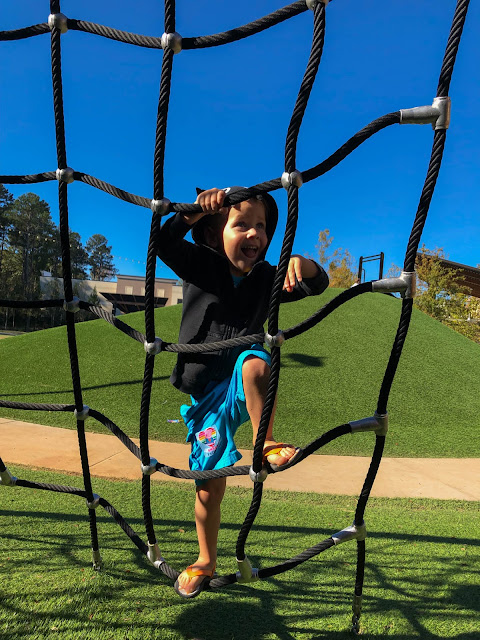 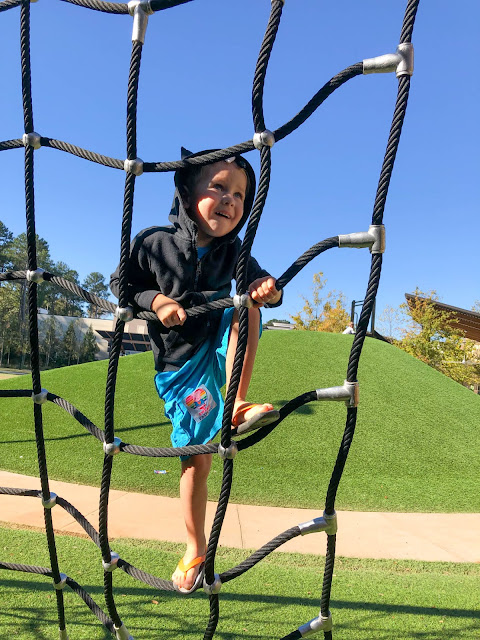 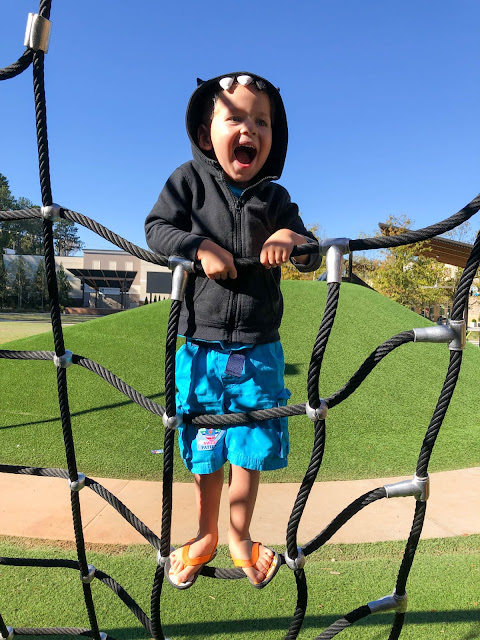 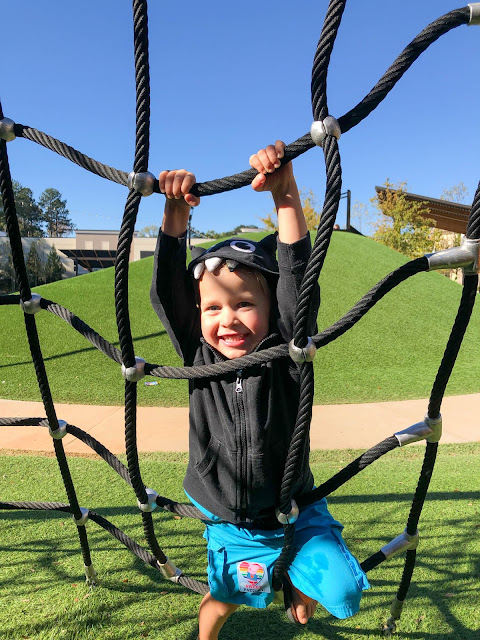 Alexander, obviously, had a blast. He had so much fun he forgot all about his shots. Rachel had fun, too, but is starting to feel the effects from her flu shot already (whether real or imagined; I don't know how soon side effects take hold). 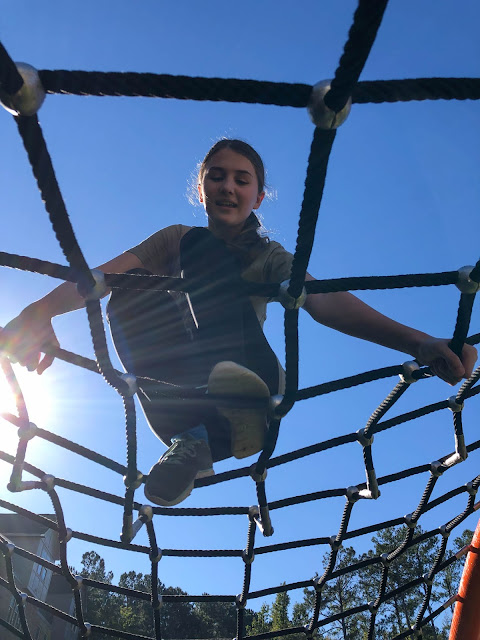 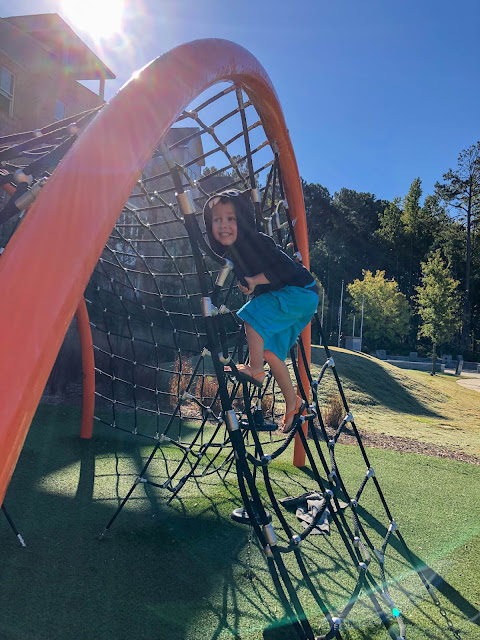 Two kids down...three more to go.
Our clinic has a policy that only two kids are allowed per appointment slot, so it takes three appointments to fit all our kids in. Luckily Phoebe will simply even things out so our visits will be 2-2-2 rather than 2-2-1!
Edited to add:
I forgot to write about Alexander's hearing test. Rachel had one, too. She went first and the nurse told Alexander he'd just have to do the same thing—say "beep" when he heard the beep. The nurse inserted a little device in the kids' ears, which beeped at predetermined intervals/decibels, getting quieter and quieter. Older kids usually do fine with this sort of thing. Younger kids usually need a bit more coaxing, but Alexander is pretty clever and he got it right away.
Only he was hilarious because he said his "beeps" like this:
BEEP!
BEEP.
Beep!
Beep.
beep!
beep.
He mimicked the loudness of the beeping in his ear as he gave his answer until he was barely whispering at the end. It was pretty funny.
Posted by Nancy at 1:48 PM