Now that Alexander can actually pronounce things, he's becoming very interested in reading and writing. For example, went the whole way around the block today running ahead to each mailbox, sitting down primly on the curb to wait for Andrew and me to catch up,* and then proudly "reading" the numbers on the mailbox for us. He still gets 6 and 9 confused, but he does fairly well otherwise. He's also doing reading lessons and has begun sounding out words all on his own as he goes about his day (there's this one superhero book that has been particularly motivating for Alexander; he wants to know every word in that book).

* I've been insisting the past several weeks that I'm walking at the very same speed I always have, but it turns out that my waddle is getting real. Andrew checked his Fitbit to show me just how much I've slowed down as my belly has grown. I've about doubled the time it takes for us to walk around the block! And, really, we have been lagging behind the children more and more recently. But, boy, do I ever feel like I'm moving as fast as I ever have. Getting up our hill takes so much work!

Anyway, Alexander wanted to write his own messages, but he wanted the messages to be meaningful rather than nonsense, so he worked really hard on them! 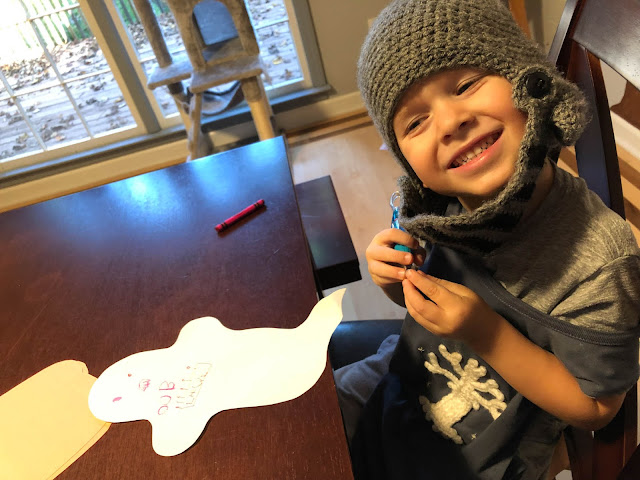 He wrote "BOO" on a ghost for Miriam...but he wrote it right to left so it really said "OOB," which we all thought was funny. Alexander did not find this humorous at all. 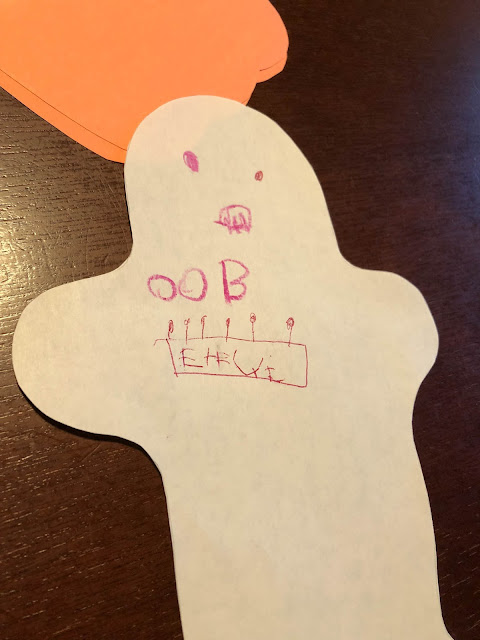 When Rachel saw it and read out, "Oooooob!" Alexander said, "Ummmm...do you need glasses or something? This says BOO!"

(And in the box beneath that is his attempt at spelling exuberant. I don't know about you, but very little brings a smile to my lips faster than a four-year-old sweetly asking, "How do you spell exuberant?" The words this child chooses to use continue to baffle me).

Here's the pumpkin he made for Miriam: 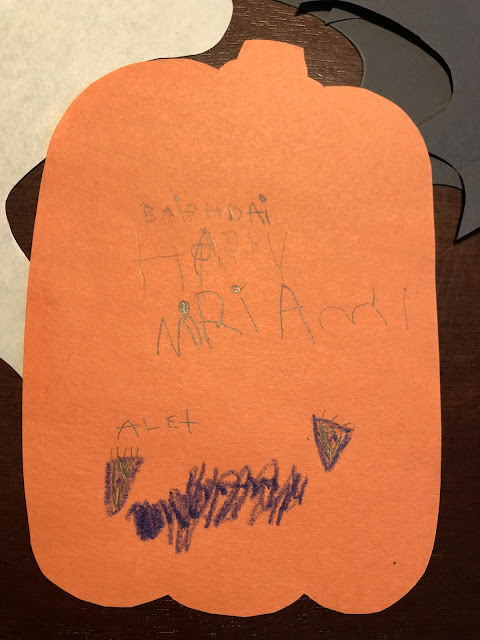 It says, "Baifhdai Happy Miriam!" which...we'll take. He did some great work!

I'll write about their birthday "balloons" collectively when we de-spookify our tree. For now I'm under strict instructions to leave all the Halloween decorations where they're at, which is an understandable directive given Halloween is only a week away and it would be a shame to take down Alexander's Halloween-themed birthday wishes before then!

Here's a sneak peek at the cards we made (it's possible that some of our readers might be the recipients of these cards): 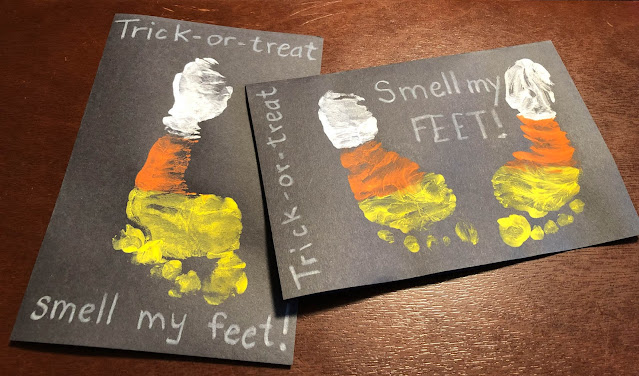 Benjamin really wanted to make a footprint, too, but...his feet are as big as mine these days! That's not to say his feet are very large (I have rather small feet), but they're large enough to not be cute on a card like this. Even Zoë's feet are getting borderline un-cute, size-wise.
That said, Uncle Rod once did a painting using his feet (it used to hang in Grandma and Grandpa's house in Daybreak...though I'm not sure if/where I've seen it since then), so even big people can use footprints in art!
The kids thought it was weird, funny, and cold to paint their feet. But it was also fun!
When our footprints had dried, the kids each picked someone to write a message to. Alexander took this task most seriously—he actually wrote in two cards, while Benjamin and Zoë each only wrote in one! He did a fair bit of tracing (I lightly wrote the words on the card in pencil and he went over my lines with a white crayon) but also did a bit of the writing on his own. 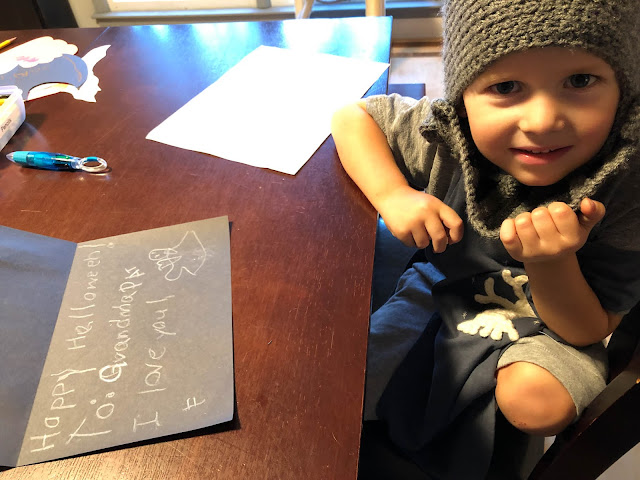 "From" is one of the words that he wrote out by himself (in the above picture we only have the "F" down so far). I had written many words on the whiteboard for the kids to copy down, should they need them, and "from" was among those words. It was at the very bottom of the board and Alexander sounded it out all on his own.
I actually had it written on the board like this—From:—so Alexander wanted to know what the fancy dots were after the m. He's all about the fancy dots these days because Zoë gets fancy dots in her name! Sometimes when he writes Phoebe he'll throw some fancy dots into her name, too (usually over the b, because for some reason or other he feels the b could stand to be a little more ostentatious). So he knows all about dieresis...but what is this colon thing...
So I explained that the colon means "this is who the word before refers to"; it tells us that the answer to the question it raises will be told after those (:) marks.
To: Recipient (Who is going to get the card? Who is the card to?)
From: Sender (Who is sending the card? Who is the card from?)
"Oh!" he said. "I get it!"
And he quickly grabbed a whiteboard marker and scrawled "ALEX" after my "from:"
Anyway, when it came time to sign his card he decided that instead of turning around to look at the board he would try sounding out the word "from."
"Let's see," he said. "Fffffffffrrrrrrooooommmm. From! First there's a 'fee!' That's like an E, but only with two lines instead of as many as you like."
He carefully wrote an F (with only two lines), while I tried explaining to him (again) that the letter name is "ef," and E technically only has three lines, not as many as you like...
"But when I do E's I put as many lines as I like," Alexander told me.
"I know you do, Baby," I said. "I know."
And that's fine. It's a stage all kids go through, I think. Besides, it keeps things fancy!
We've been focusing more on phonics than on alphabet and I think it's showing in his lack of ability to really sing the alphabet (or associate the letter names with, you know, the letters). It's not that we never sing the alphabet (we do); we simply don't focus on it. If Alexander had his way the alphabet song would go "A, bee, cee, dee, eee, fee, ghee, hee, jee, kee, lee..."
Benjamin didn't "get" the alphabet song until he was in kindergarten (he absolutely did not believe me that it was H, I, J, K and would insist on singing H, I, K, J), so I feel like Alexander has time to figure things out.
Posted by Nancy at 11:25 PM