We held our autumnal "opening ceremonies" last Monday—on Canadian Thanksgiving—as we usually do. Sometimes we do a fuller Thanksgiving, but other times life seems too hectic for that (like when Daddy has to work and Mommy's diet is so limited) so we did a simple fall meal instead. We had pumpkin soup with some Thanksgiving sides. Now that I think about it, we have instant stuffing in the basement that we probably should have used. Oh, well.
I was in charge of the soup and put Miriam in charge of the cranberry sauce. She decided the recipe on the bag was ridiculous because our family really enjoys cranberry sauce. Surely the yield wasn't enough for our appetites! I did manage to convince her to follow the recipe in the end, which was probably a good thing because the recipe yielded plenty.
"I think you'll be surprised by how much three cups of berries really is," I warned her. "How many berries are in a package?"
"I don't know..." she said.
"Ummm...it says 25!" Alexander informed us. 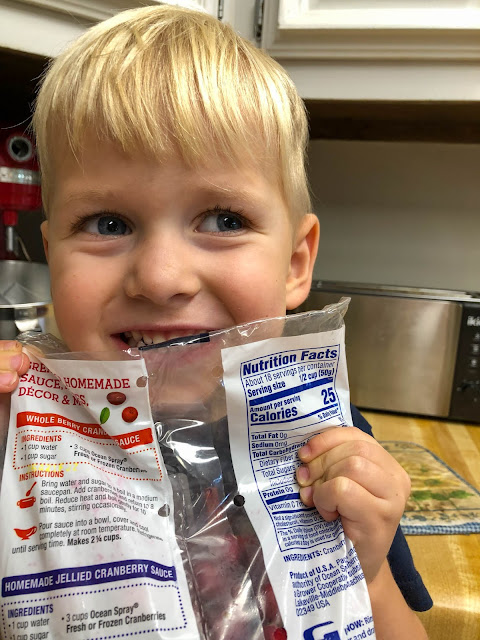 And, indeed, the bag did say 25, though there were a lot more berries in there than 25!
Alexander is getting really into numbers lately. Tonight on our walk, Miriam and I had a naked-eye contest to see who could read mailbox numbers first...without our glasses. Alexander beat us every time.
"That mailbox says 3-5-5-0!" he called out at the first house we blindly passed by.
And it did say 3-5-5-0 (he can't quite read big numbers like three-thousand-five-hundred-and-fifty, so she simply reads out the digits, which is fine for his age).
Anyway, here are Miriam and Alexander hard at work at the stove: 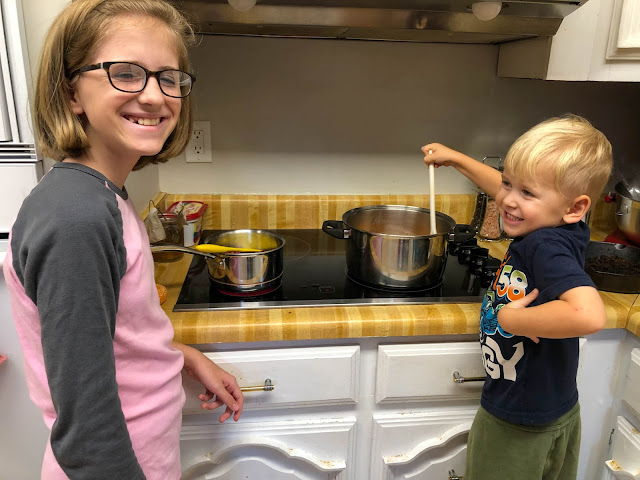 Miriam, as I mentioned, was busy with the cranberry sauce and Alexander was stirring the soup for me while I got some vegetables and toast ready. He loves to be the sous chef of the kitchen!
Here's our meager Thanksgiving dinner: 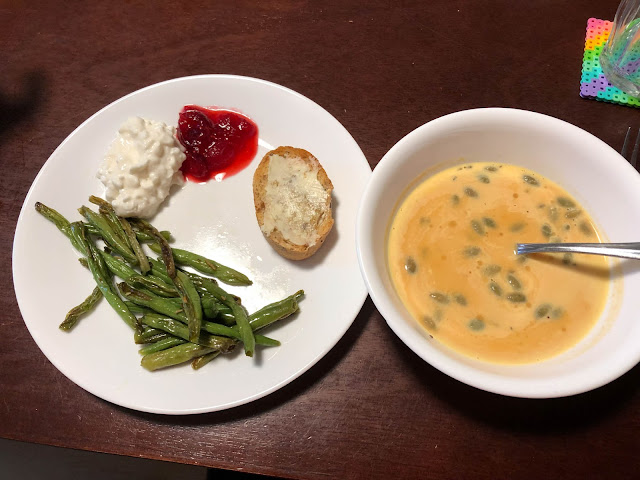 Toasted bread—with homemade butter!—cranberry sauce, green beans, cottage cheese (for protein) and pumpkin soup with pumpkin seeds, which I thought was rather bland but which everyone else loved. That seems to always be the way it is at our house; I think, "Meh—this is rather bland!" and everyone else is like, "This is the best soup ever!" Even Zoë raved about it. 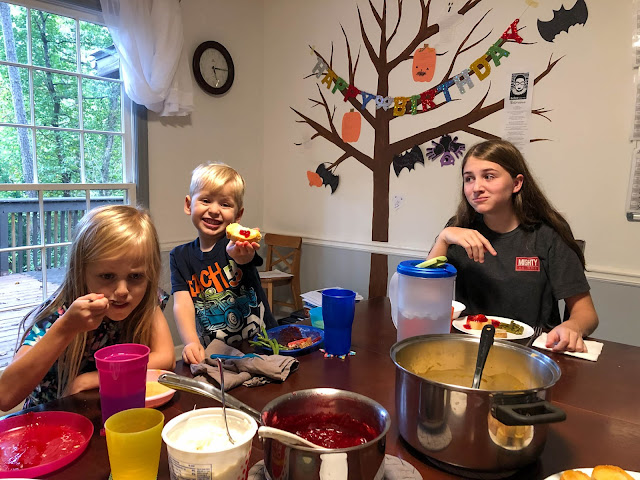 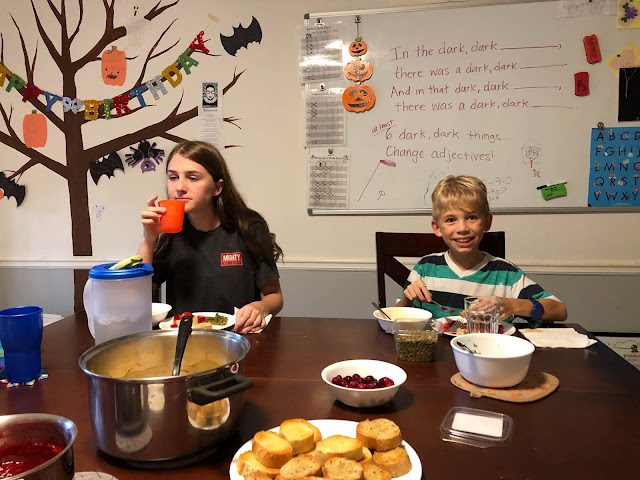 We all enjoyed watching Alexander eat raw cranberries. He loved them, but—oh!—they're sour! 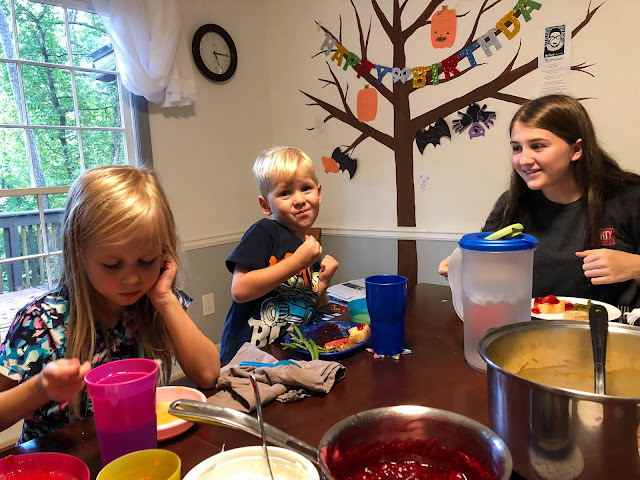 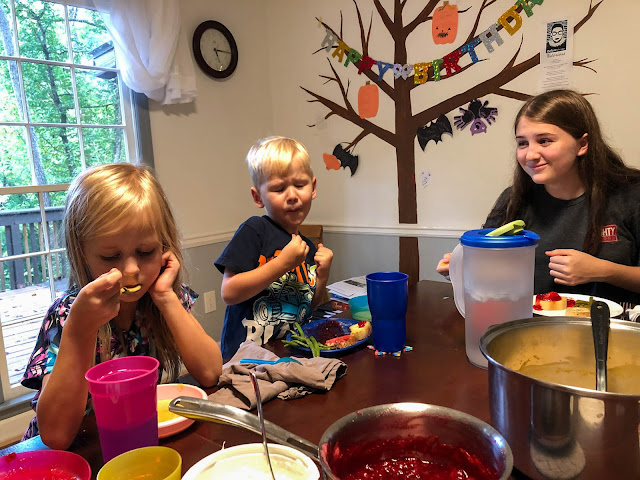 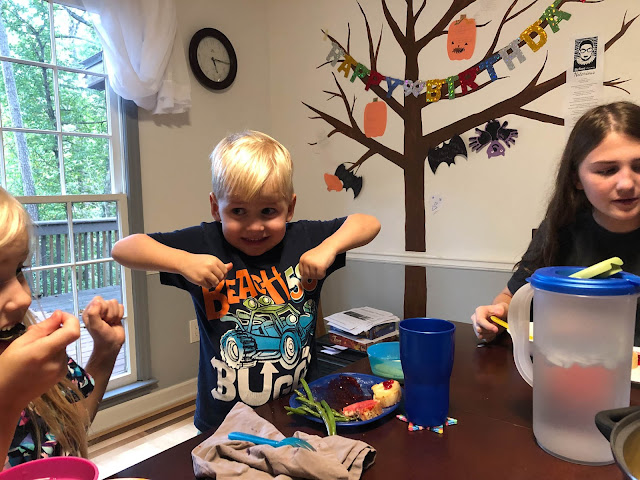 After our dinner we went for a walk and played outside for a while. 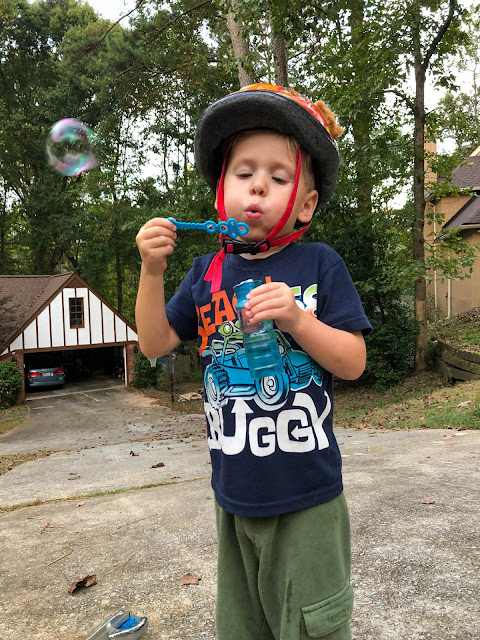 And then we made our first batch of leaves to put on our Thankful Tree (which is currently also a Birthday Tree and a Halloween Tree, so it's very busy). Alexander painstakingly wrote out what he was thankful for this year: 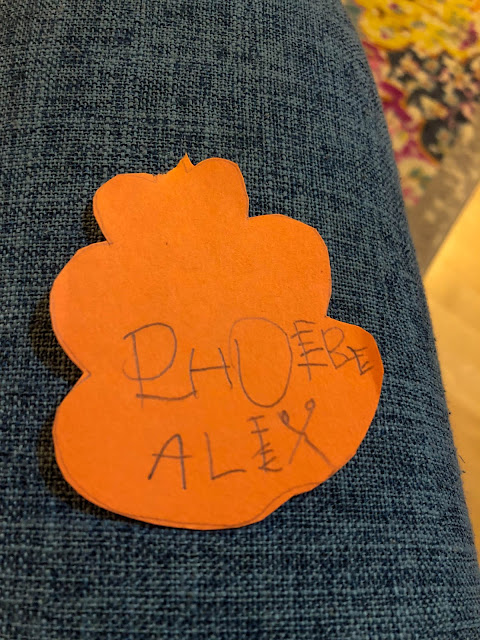 He's very excited to be a big brother, though I have a hunch that he won't like Phoebe cutting in on his snuggle time, which she's sure to do (it's inevitable, little buddy). A cuddlier little boy I've never known!
We also broke out our Halloween "Twister" boards to play for the first time this Halloween season, as is traditional. It's a silly tradition, but it's pretty easy to keep (those are the best kind, really). I played the role of spinner because that mat is getting mighty crowded with children (and because I'm hugely pregnant). 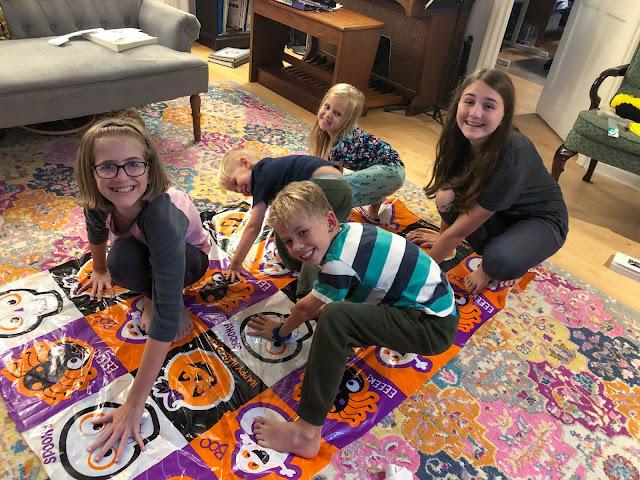 We finished off the evening with some peach crisp that Rachel whipped up (along with some whipped cream). Andrew came home while we were having dessert so we had scriptures and prayer around the table while everyone finished eating and then we shipped them off to bed. 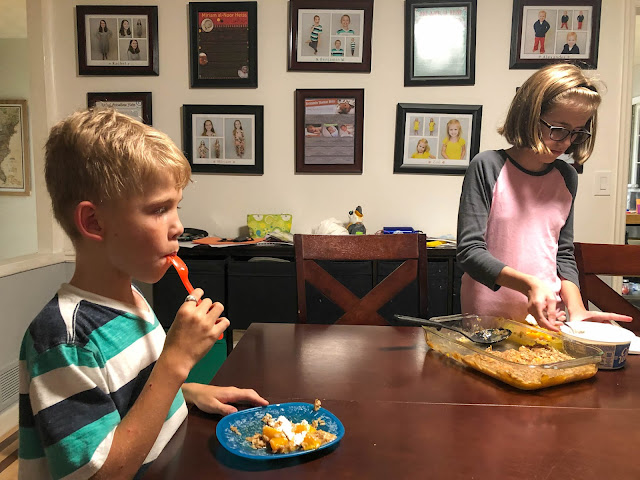 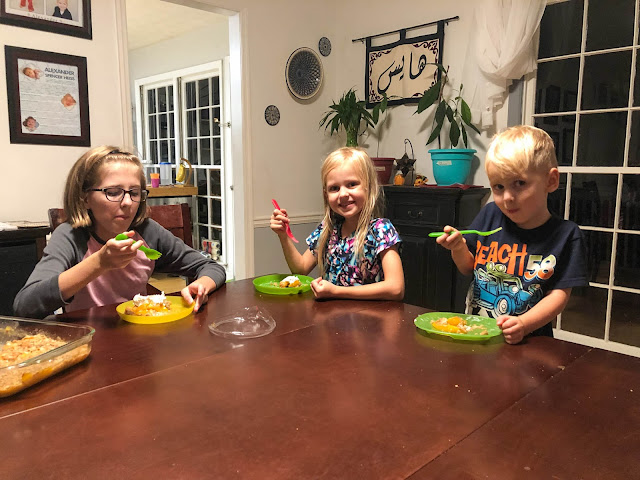 Spending the day being grateful was a wonderful way to welcome this season; we'll keep looking for things to be thankful for until the next Thanksgiving. It's a fun way to spend the fall.

And, randomly, here's a fabulous Halloween picture Alexander drew. I think I mailed it to one of my sisters with their birthday cards, but I'm glad I snapped a picture first. There's a jack-o-lantern in the middle (obviously), with a black bat perched on top (though I'm not sure bats perch like that) ad a brown bat flying upside down (though I'm fairly positive they fly right-side up), there's a ghost on the far right and a vampire on the far left. 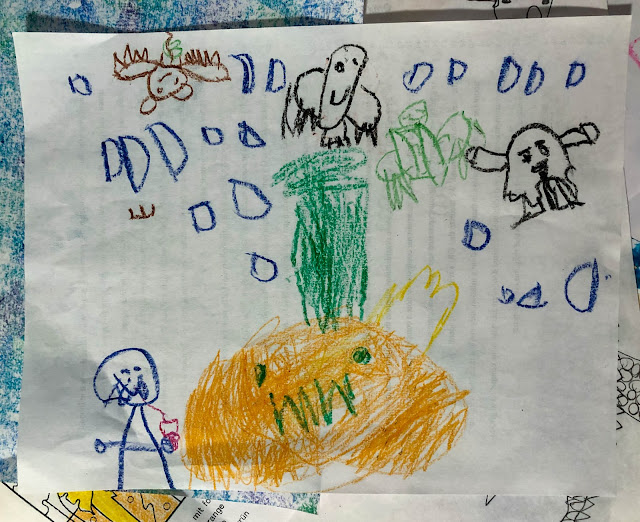 That vampire, if you can't tell, is drinking blood...from a juice box.

This is because Alexander's knowledge of vampires was acquired by reading the book I Love My Fangs by Kelly Leigh Miller, and in that book the little vampire sit with his friends at lunch and has...a blood drinking box. So, obviously that's how all vampires behave.

His understanding of the world is so wonderful. Did I tell you how we recently read Say Something by Peter Reynolds, the illustrations of which feature many speech bubbles. Alexander said, "I do say things...but my words don't come out as ghosts!"

Also funny is that Zoë said the prayer this morning and also prayed that Daddy could have a good "time traveling" and...that phrasing still just rocks Alexander's little mind. So we all had a good laugh about that this morning. And it was good to start the day on a high note like that because it was all downhill from there (such a recalcitrant day in this household, I tell you; that's why I wrote about last week tonight)!