Miriam wanted a s'more cake for her birthday, so Rachel did some research and planned out a phenomenal cake that sounded mouthwatering to everyone in the family...except me. I mean, besides the fact that I'm completely off sugar right now...marshmallows + chocolate = a big "no thanks" from me. When Andrew lamented that he wouldn't be around for cake (since Miriam's birthday is on Monday and he's otherwise occupied Monday(s)), Alexander smacked his lips and said, "Goody! More cake for us!"
And so, in an effort to spite Alexander and include their father (because in this house, we're both vindictive and virtuous), the girls made the executive decision to celebrate Miriam's birthday with cake today rather than on Monday.
Rachel spent practically all day Friday and Saturday in the kitchen. She made a (homemade) chocolate cake with (homemade) marshmallow fluff filling, covered in (homemade) buttercream frosting, topped everything with (homemade) ganache, and bedazzled it with mini s'mores that she made by roasting mini marshmallows over a candle flame.
We teased her for not making her own graham crackers and marshmallows, which she kind of took as a challenge so don't be surprised if you see her whipping up those from scratch in the near future just to prove that she can (as I said earlier: vindictive and virtuous).
Just...no one say anything about making chocolate to her, okay?
(Although, I have a friend who took a chocolate-making class when she was living down in Mexico. We're talking, like, "Step one: Open cocoa pod. Step two: Roast the beans. Step three: Mash the beans." Except that I have no idea what the actual procedure is, so don't follow those steps I just told you. Let's just say, the class took her through the whole process and what she shared looked very interesting...if you're into that sort of thing (and even if you're not, because I'm not particularly interested in making chocolate from scratch and yet it looked interesting)).
Here's the finished product, fresh from the fridge so it could get warm on the counter while we went on our family walk: 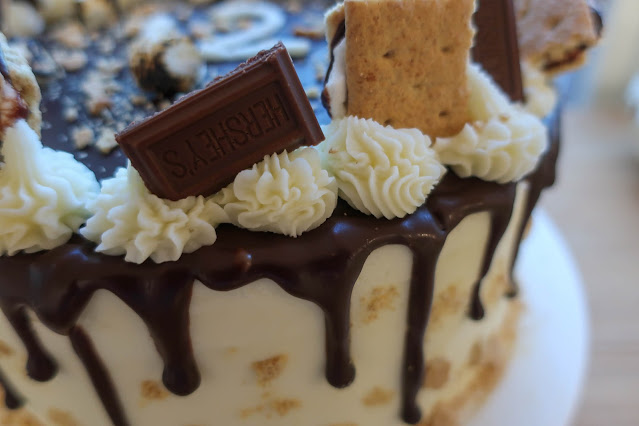 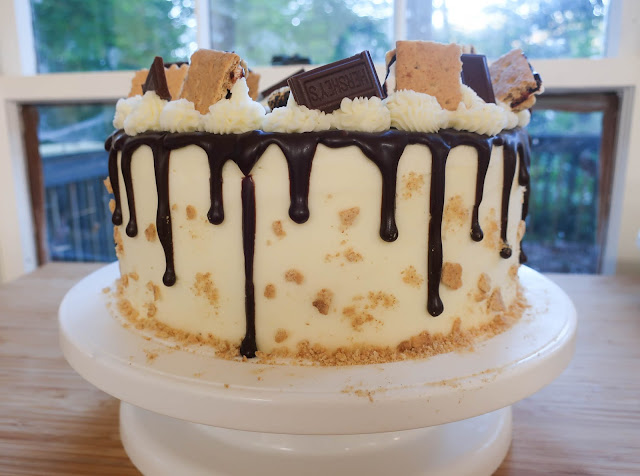 And here's the cake sitting on the table in all its glory: 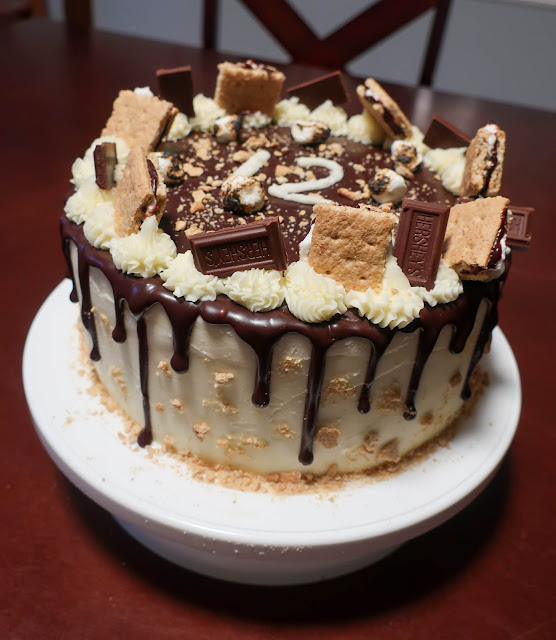 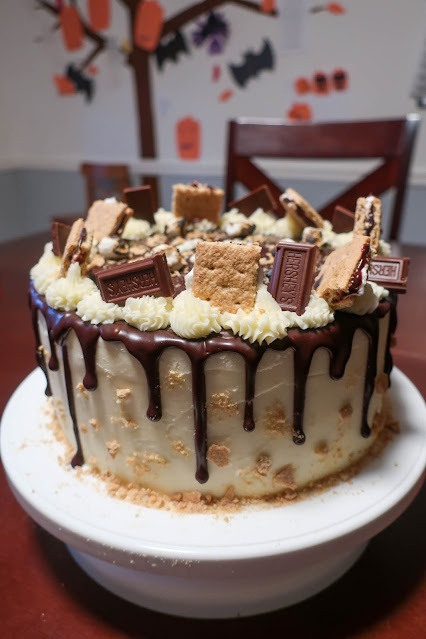 Here's Miss Miriam with her cake (and Alexander very narrowly not stabbing the cake with his fork; he was completely ready to dive in): 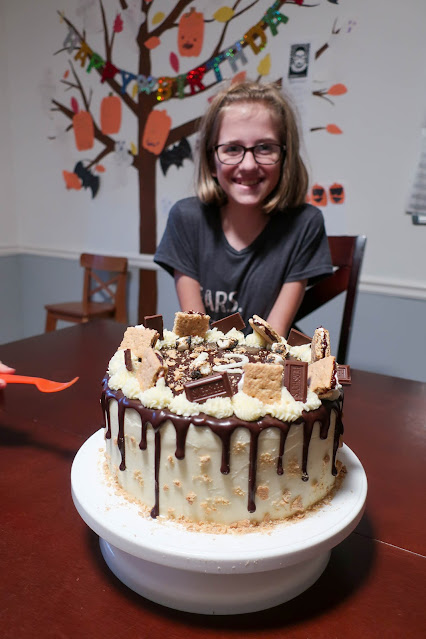 (Put your fork down, Alex!)

And here's the whole crew (we'd just pulled Alexander's knight helmet/hat off his head for, like, the first time all day and he was a sweaty mess underneath, so excuse his hair): 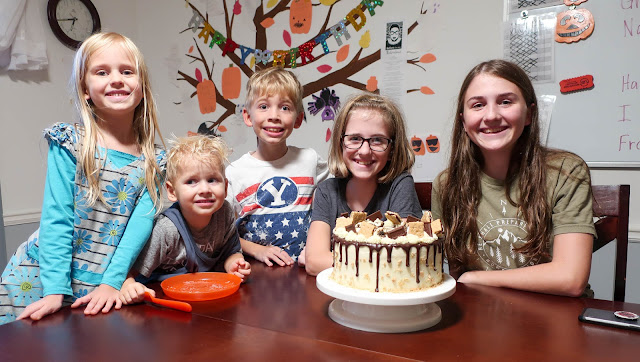 It's weird that lighting candles on the kids' cakes is becoming such a time-consuming, fire-hazardous thing. It used to be that we'd just stick a candle or two on the cake and light them up without too much effort. But now we're, like, planning out where to stick all the candles and are half afraid we'll burn the house down trying to light them all. 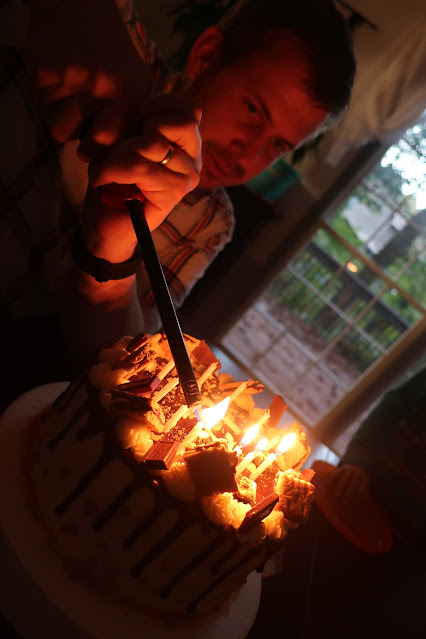 But, like, so weird that the kids keep needing more candles on their cakes when we're not getting any older, right? Simply bizarre. 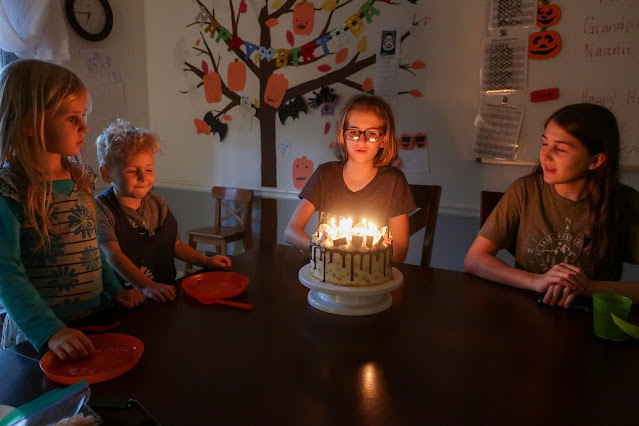 At least the very worst all that flame could do to her cake is roast the marshmallows on top a little more (unlike the time the sign on Benjamin's cake lit on fire).
Here's the beautiful birthday girl (who joined with us and sang to herself): 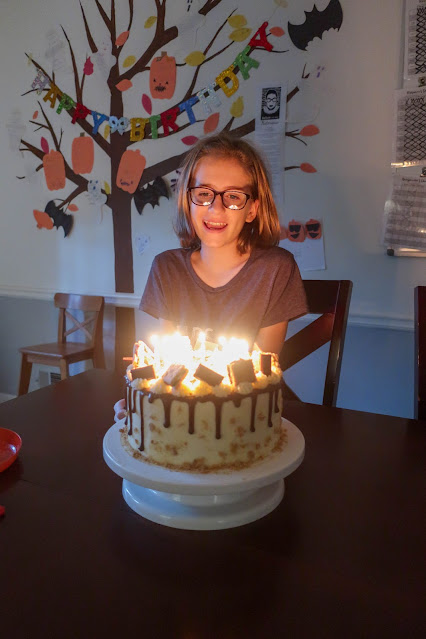 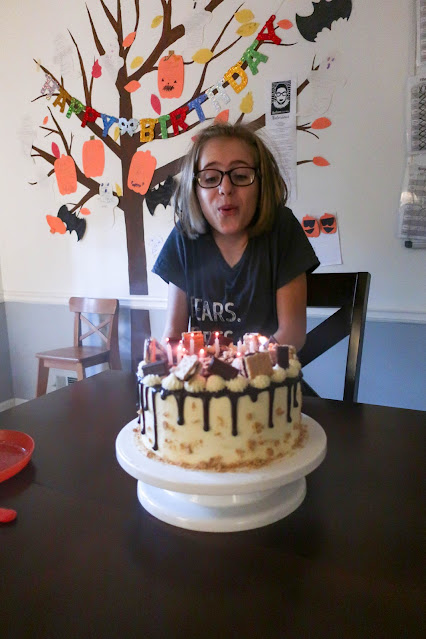 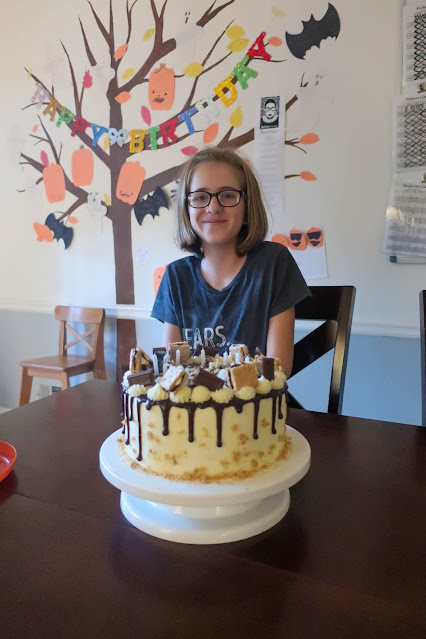 She'll have many happy returns on her birthday, for sure, since we're celebrating it over the course of several days rather than all in one go!
Here's the inside of the cake, for those curious: 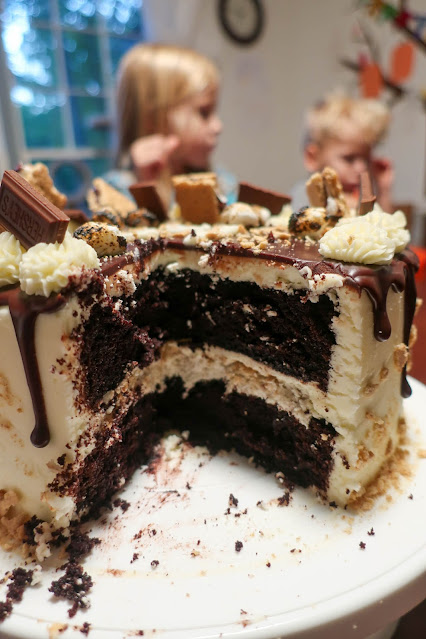 The marshmallow fluff was a little hard to cut through and could probably have used a little more time out of the fridge before we dug in, but otherwise the cake was, I'm told, dimply delectable. 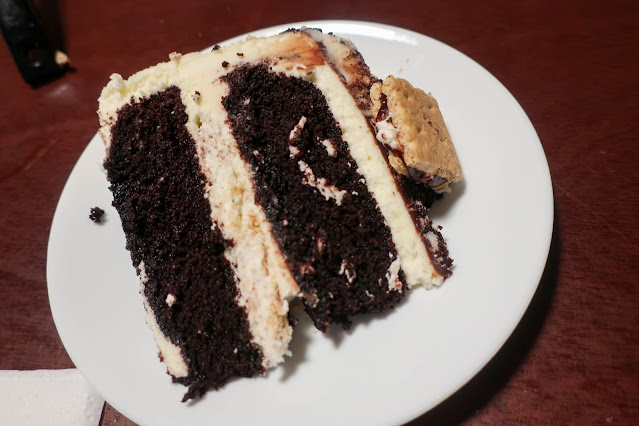 Rachel was particularly excited about sampling this cake, as you can tell from how excited she was to be in the background of this picture Andrew took of a mini-s'more: 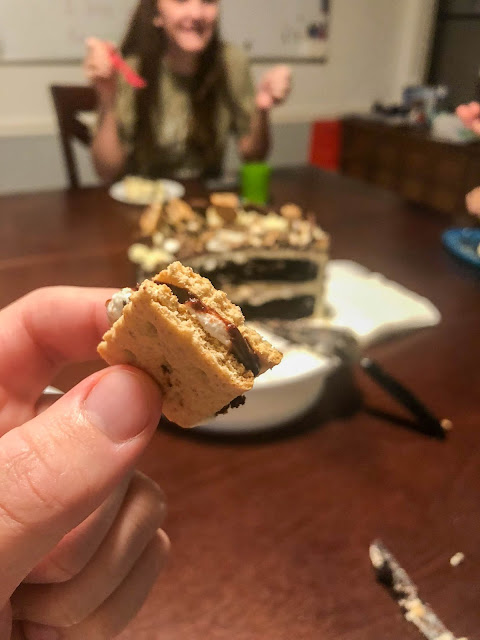 And by how enthusiastically she's shoveling cake into her mouth in this picture: 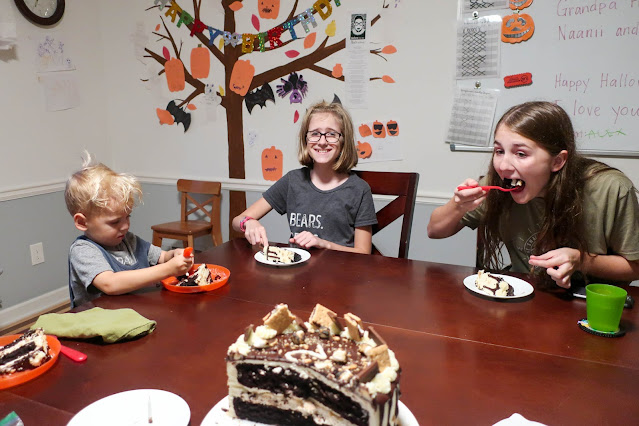 Miriam pointed out that today she's wearing a shirt that Rachel got for her 12th birthday, shortly after we moved here, which is wild. Our kids do this about every two years, as well...they all...trade places. Like, Alexander is as old as Zoë was when we moved here. Miriam is as Rachel was when we moved here. And somehow it just feels strange that they're all continuing to get older.
Like, how is Miriam 12 now? How is Rachel a teenager? How is Alexander not a baby? How is Zoë in grade one? Poor Benjamin has been stuck in the middle of things, and with three years between him and the sisters he's sandwiched between, he's kind of on his own schedule of getting older, but it's still remarkable that he's doing it, too!
They all keep insisting on growing up! But at least they're growing up great.
(In my humble—yet amazingly accurate—opinion).
Happy fake birthday, Miriam!!
Posted by Nancy at 12:25 AM