Always fun for everyone

He gets Maymester off before he's back to teaching again.

But when I say he gets Maymester off, I mean that lightly. His vacation time has been interrupted for various meetings (dissertation defense meetings, among other things), so the past couple of days Grandpa and I have taken the kids to the beach and Andrew has met up with us later. And the funny thing is that it's way more fun for everyone when Daddy comes!

They have a lot of fun with Grandpa, too, I think. He spent a lot of time out jumping in the waves with the kids.

It's even possible they had fun with me, though I'm more anxious about everything (sharks, guys...and alligators...and snakes...and ticks...and sunburns...and meteors crashing into the planet) so I spend more time doing things like slathering children with sunscreen than playing (they burned anyway, but think about how much worse it would have been without my efforts). I tend to have an extra hard time loosening up and playing when I have a nursing baby because what if she needs me and I'm cold and wet and covered in sand (or worse, eaten by a shark)? That would be horrible (or at least uncomfortable).

Anyway, Daddy was fun for boogie-boarding, danger-sandcastles (the ones built down by the surf), and all sorts of adventures. Grandpa was good for wave jumping and Phoebe naps. I was good for shell hunting and safe-sandcastles and sunscreen reapplication and Phoebe cares. Divide and conquer.

But this is a post mostly about how great Andrew is to us.

I am typing this up while wearing his sweater (because the thermostat at the condo is set to freezing and my sweater is...somewhere in the room with a sleeping Phoebe...and I'm freezing...he is, too, but he's letting me have a turn).

He's done a great job juggling work and play on this trip.

Here are a few pictures of him playing this afternoon—watching the waves with Phoebe: 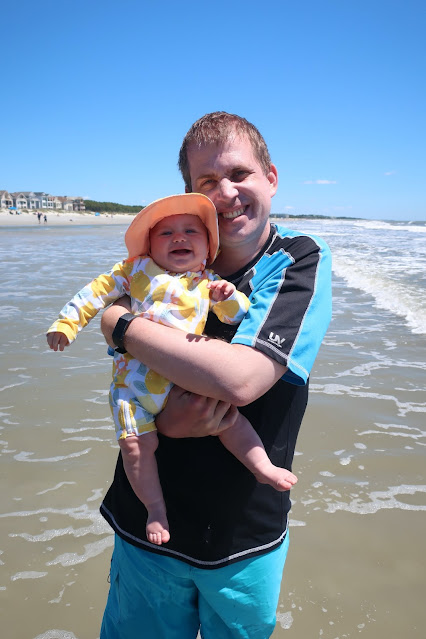 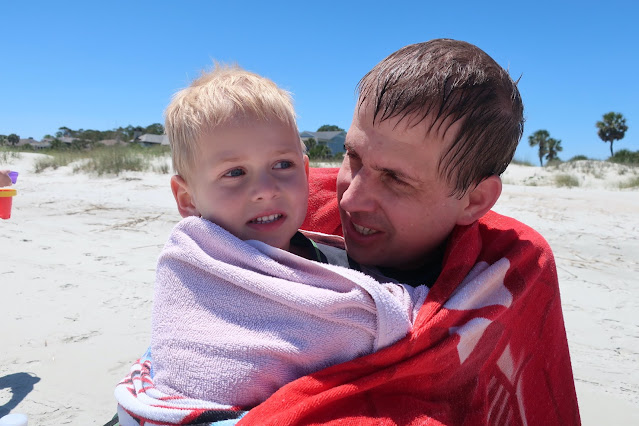 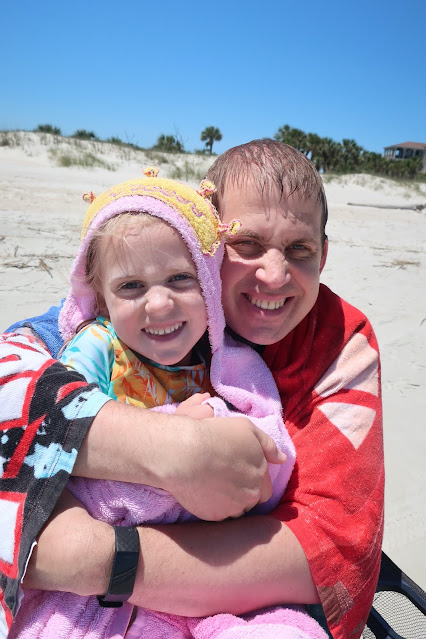 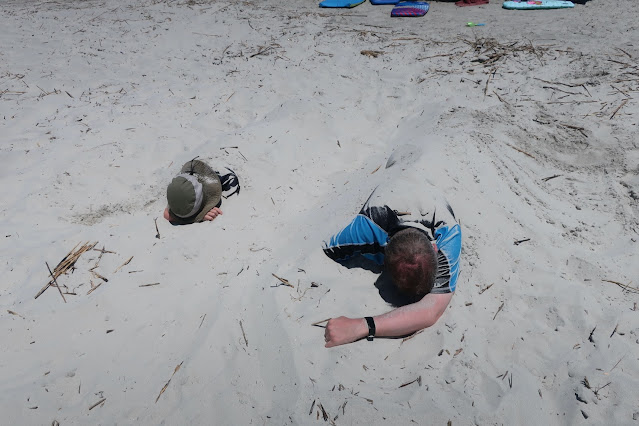 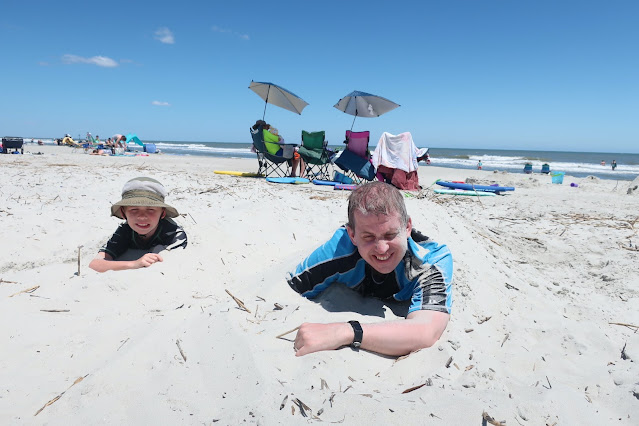 Standing in the surf with Rachel, Phoebe, and Miriam (Rachel was a little surprised by how deep that wave was): 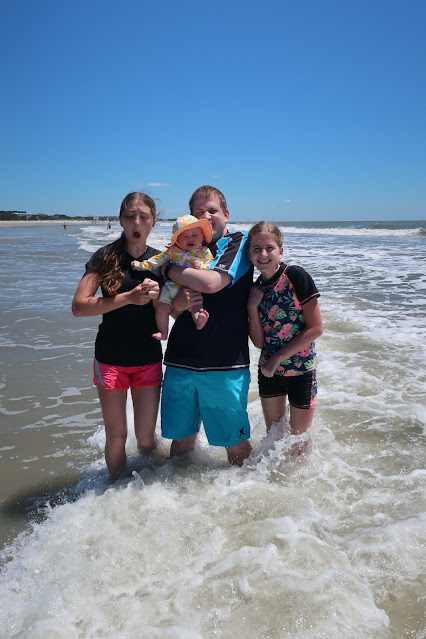 We went for a walk on the beach after dinner this evening and Rachel took this picture of Andrew kissing Phoebe's cheek, which I think is just adorable (even if she's ignoring him a little bit): 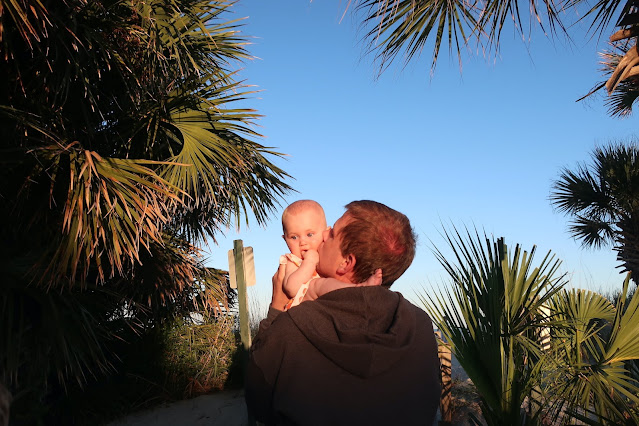 She doesn't typically ignore me... 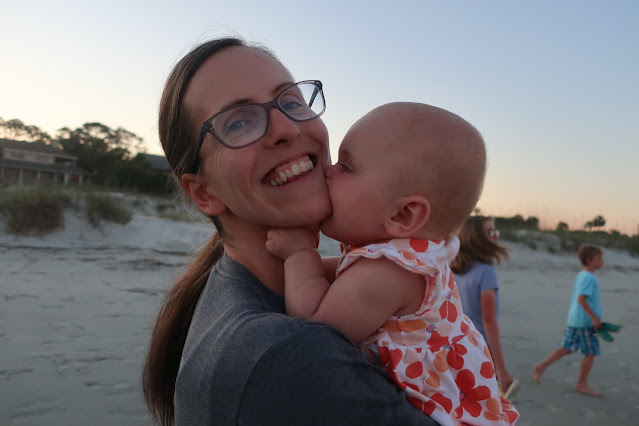 Here's Andrew tossing Phoebe up in the air, an activity she tolerated (because she's getting braver and braver every day): 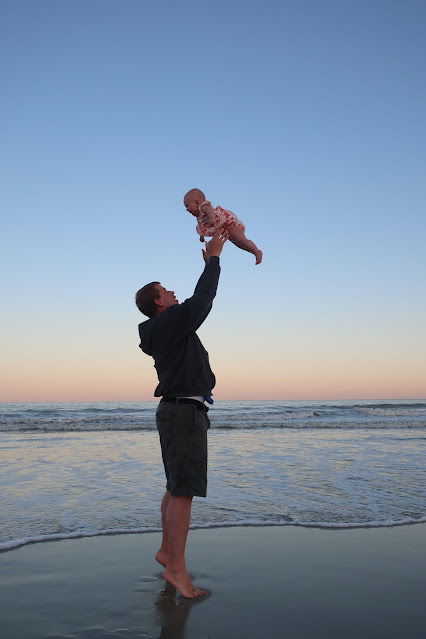 We are lucky to have such a good Daddy in our lives! 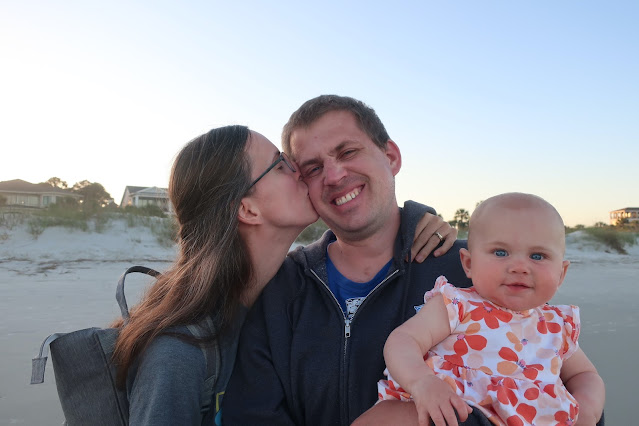