Getting to the beach was so easy; Phoebe had not yet discovered her passionate dislike for traveling in her car seat. Our stopping and going was perfectly timed with her desired napping schedule, so she slept in the car, woke up for Ocmulgee,  slept in the car, and then screamed for the last half hour before we made it to the condo. That, I suppose, is when she realized how terrible traveling can be because she screamed every other time we put her in the car after that!

We arrived at the condo, took the elevator up to the fourth floor, found our door, and explored the inside. Zoë, Alexander, and Benjamin claimed an obvious children's room with a single and full bed. Andrew and I took the main bedroom with a full bed and adjoining bathroom (but then it ended up that it was easier for Andrew to sleep in a full bed with Zoë and Alexander than to sleep in a full bed with me and Phoebe, so Andrew slept in the kids' room and Phoebe and I took the whole bedroom/bathroom combo for ourselves, which I felt a teensy bit guilty about all week). Grandpa took the other bedroom with a full bed. Rachel and Miriam were on the hide-a-bed in the living room. It worked out well.

There wasn't a lot of usable closet space, unfortunately, so all of our stuff was just kind of "out" all week. The kitchen cupboards were all full of dishes...so our food was just...out on the counter. The hallway closet contained the HVAC system. My bedroom closet contained the water heater.

"A water heater??" Alexander said when we opened the door. "In the closet?! That is wildly unsafe! They should have put this thing in the basement!"

Our water heater is...in the basement.

The water heater had to go somewhere and this closet seemed like as good a spot as any.

Then I reassured him that it was perfectly safe.

We had bigger fish to fry when it came to safety—keeping our eyes peeled for alligators. Here's Zoë by a sign in front of our condo, warning us that alligators are common in these areas. 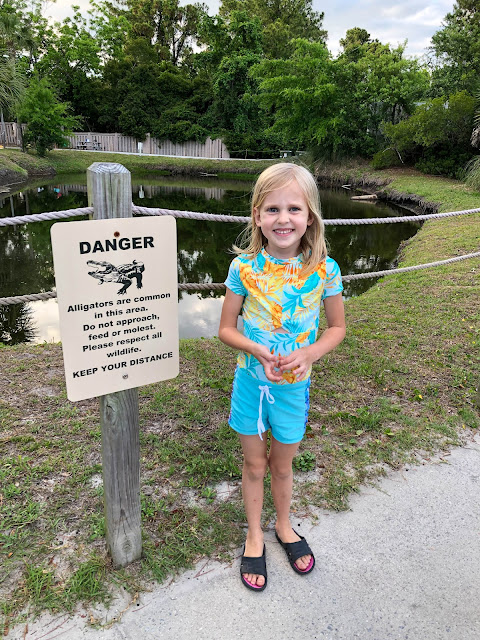 We weren't too concerned, however, because we've never encountered an alligator in "the wild" (which in this case means "the parking lot") before and we've lived in the south for quite some time. To be fair, alligators are not common in Georgia north of "the fall line," so it's pretty rare to ever seen an alligator as far north as Atlanta. Usually, if alligators are spotted in our area, experts suspect they were released north of the fall line by...doofuses...who caught them as babies and raised them as pets before realizing they don't make great pets.

Alligators weren't common in Durham, either. They prefer to stick closer to the coast and if they are found in those parts it's usually suspected, again, that some doofus figured they could keep a gator as a pet (but, once again, for the record, they make poor pets).

In short, we've never encountered an alligator in either of our southern homes. But we've also never encountered—or even spotted—one during any of our trips to the coast (though our friend Suzanne has)! I think maybe we might have spotted one in Florida (but that's not coming up when I search for it, so I don't know).

This trip we saw one in the pond at Ocmulgee and then when we were walking to the beach on Tuesday we found this little guy sunning himself (herself?) on the bank of the little parking lot pond! 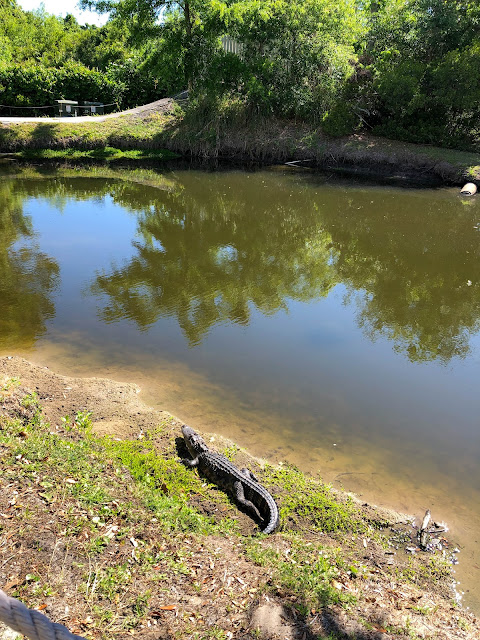 Here's Alexander posing near it (but not too near it): 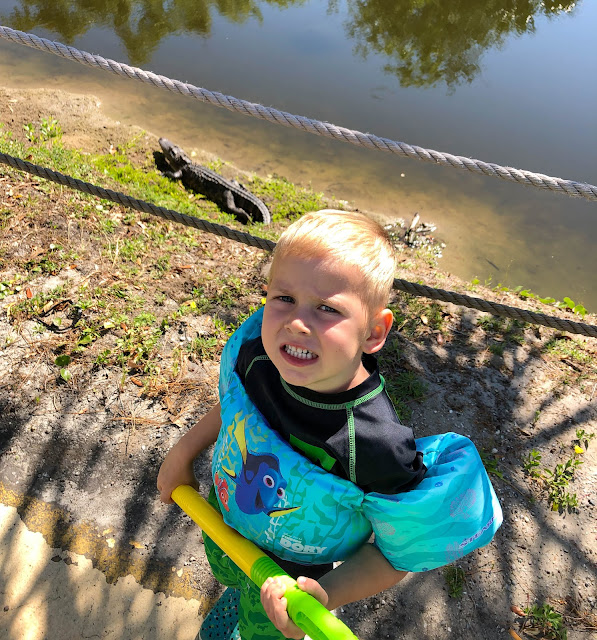 I'll probably post more pictures of it later once I get the pictures off the camera. It was quite the surprise to just stumble upon an alligator! But at least we had the option of simply walking away. Not everyone always has that option; sometimes alligators are aggressively hungry, other times humans are absurdly inhumane. Shortly before leaving for the beach, I read this thread on Twitter about "the history of black babies used as bait" for alligators (this article at Andscape offers more discussion about the practice). I couldn't stop thinking about how barbaric that is (whether, as Andscape points out, as a joke or not) whenever we were in an area that required us to be on the lookout for gators (which was...lots of areas).

We managed to escape gator country with several alligator sightings under our belt...but without becoming alligator food, ourselves. Alligators aren't big hunters on land, from what I hear, and this wasn't a particularly large alligator, so we felt pretty safe.

We put the little kids to bed, including Phoebe, who slept like a little rockstar the whole week (I think she was too tired out from playing tourist to put up much of a fight at bedtime), and then we settled in to finish the game of "hand and foot" we'd started earlier in the week. When we finished that game (Grandpa won, big time), all the big people headed to their various beds: Rachel and Miriam pulled out the hide-a-bed, Grandpa shuffled off to his bedroom (he burned his feet at the beach, so was feeling a little bit shuffle-y), Daddy tip-toed into the kids' bedroom, and I quietly climbed in bedside Phoebe.

I was just drifting off to sleep when I was yanked wide away by a terrifying hissing sound.

My dream-self (knowing my real-self was so tired) tried a self-preservation tactic by quickly conjuring a dream-reason for the noise.

A reptilian monster lunged at me and started hissing in my face.

Unfortunately for my dream-self, my real-self was either startled awake by this mind-monster...

...or realized that something else should be happening by now.

My dream was glitching...

Monsters don't just lunge at people, hissing and snarling and ready to attack and then...

My eyes flew open and I blindly scanned the dark room, trying to make sense of the noise. I jumped out of bed, ran into the hall, and flicked on the light. Andrew, who had not quite made it into bed yet, did his best to calm my yanked-from-sleep hysterics.

Now that I had a little more light, I tried scanning the room once again...still somewhat blindly since I need corrective lenses to see (myopia—it's a real problem). No appliances seemed ready to spontaneously combust. No steam was issuing from the fridge or dishwasher, but...

"The water heater!" I realized, scurrying back into my bedroom and throwing open the closet.

Indeed, the water heater was the culprit! It was hissing madly and, by this point, shlopping water all over the floor. I quickly threw some towels on the floor while we tried to figure out what to do next.

My brain was all fuzzy from having just fallen asleep and then rapidly un-fell asleep.

Andrew got a pot and cup and started bailing out the emergency water tray. I found our host's contact information and called them up.

"Hello?" they said quite groggily.

I explained the problem, noting that...well...we really didn't know what to do. They walked us through shutting off the hot water valve and flipping the breaker. Shutting off the water valve helped quiet down that hissing sound quite immediately. But still water continued to fill the overflow tray! There's a pipe leading from the tray to...a drain, I presume...but the pipe was angled upwards from the tray so instead of allowing water to safely flow out of the building, the drain pan was simply overflowing.

(For the record, the water wasn't coming out of the emergency release valve; it was coming from somewhere in the depths of the water heater...or something).

When the water heater seemed to be merely dripping rather than gushing (and with our host's permission, understanding that things were potentially going to overflow (they'd called a plumber but weren't able to get them to come out until the morning, I guess)) we went to bed for a few hours.

The tray was full again, nearly overflowing. We set Benjamin to work bailing out the tray since he was awake already. 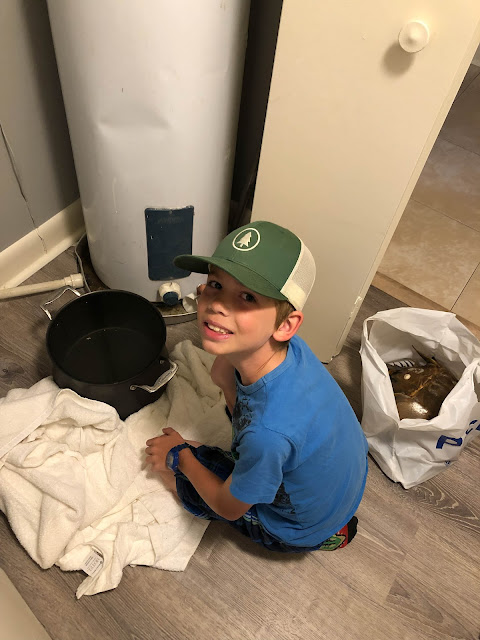 We all did quite a bit of bailing in between packing up to check out of the condo. Here's Alexander's reaction when he stumbled out of his room first thing in the morning and found the chaos of the water heater: 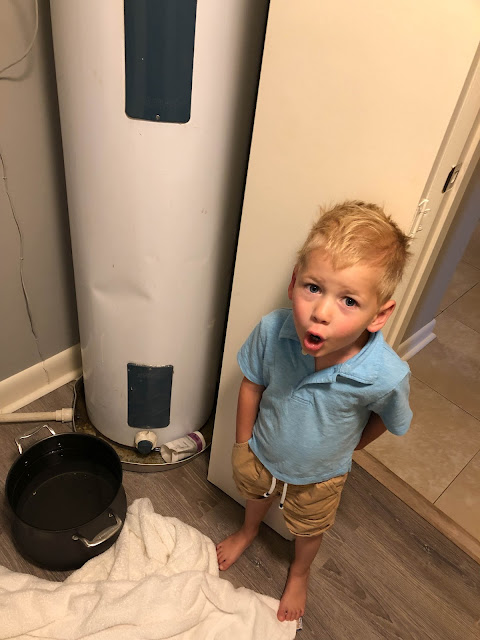 "I told you this was unsafe!" he chided, as if I were responsible for the placement (and/or the spontaneous death) of the water heater.
He wasn't wrong though!
It was wildly unsafe to have that water heater in the closet!
We left at 9:45 and the "host" said they'd be there around 10:00, so hopefully they got things sorted out!
We are sad our vacation is over, but we're happy to be back in our own beds, with our water heater in the basement and no gators in our backyard.
Posted by Nancy at 11:01 PM