Phoebe vs. the other kids

Taking this week to relax and be a family has caused us (or at least me) to reflect on all our sweet babies, who have been alike in some ways and different in others. They've also been a lot of hard work! I was realizing, as Grandpa was pacing the beach with Phoebe, how easy a trip like this would have been with children ages 5 to 15 (really only 4.5 to nearly 15).

Or at least easier.

Phoebe is wonderful but—man!—babies are a lot of work!

Anyway, when we pulled up to our condo at Hilton Head after a long stretch of driving, I hopped right out to unbuckle Phoebe, who was screaming inconsolably in her car seat. I fully expected every toy I'd handed her to cascade onto the ground the minute the door opened, but they didn't. She was hoarding all the toys in her lap.

It was Alexander who would toss toys overboard (to the door-side of his car seat so that no one could grab them for him).

So in that way, Phoebe and Alexander are different.

Tonight at dinner, as I was feeding Phoebe guacamole and refried beans (and Zoë was turning up her nose at the same because she hates beans (though she likes guacamole)), I remarked how amazing it was that Phoebe has enjoyed everything she's tasted so far because Zoë didn't like her first taste of anything.

She really doesn't like to be left out of eating so she's pretty much had a taste of anything anyone has been eating.

Here she is eating some pistachio ice cream from Leopold's (which his apparently the best ice cream in Savannah): 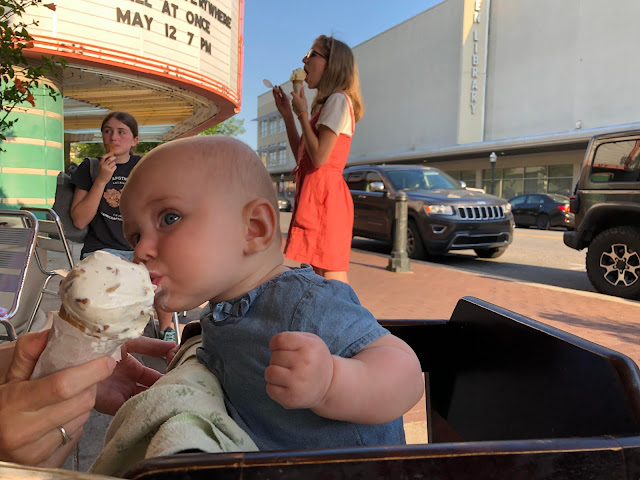 I'll admit that it's not the best food for babies, but it's not the best food for big people, either. A few little licks won't hurt her. At any rate she wasn't mad about trying ice cream.
I can't say the same for the mistake Andrew made during dinner this evening.
We were having tacos—with beans and guacamole, remember? I'd had Phoebe on my lap eating beans and guac while Andrew ate his dinner and then we switched and I made up a plate for myself while Andrew held Phoebe. But then Andrew decided he'd have a little bit more, so he got a plate of tortilla chips with some beans and salsa on the side (no guacamole for him).
He was dipping chips into the beans to share with Phoebe, who happily slurped the beans off the chips. And then he'd dip the chip in salsa and put it in his own mouth.
Things were going along just fine until he forgot whose mouth he was supposed to be fueling when and accidentally dumped a chip full of salsa into Phoebe's eager little baby-bird mouth.
Phoebe did not appreciate this first taste.
She spat it out all over Andrew's shirt. Her face turned red and she started howling up a storm. It took her several minutes to calm down at all. Andrew even fed her guacamole to make her feel better.
"Here, baby, quick! Eat this! This is soft!" he said in a panic.
"Soft?" I said.
"Not spicy," he said.
After a couple mouthfuls of guacamole she felt better, but if she grows up to have trust issues, this is probably why.
Anyway, that's one way Phoebe differs from Zoë, who didn't like guac or beans or salsa.
But one way Phoebe is like all my babies is that she loves the water. Since she was born in November, we haven't spent a lot (or...any) time at the pool. It's true that she's been to the river and, now, the ocean, but she didn't spend a lot of time really getting in those sources of water. But when we took the kids to the pool...after spending all day at the beach...Phoebe got to go in the pool and she enjoyed it a lot!
Here's Miriam taking Phoebe for her first dip: 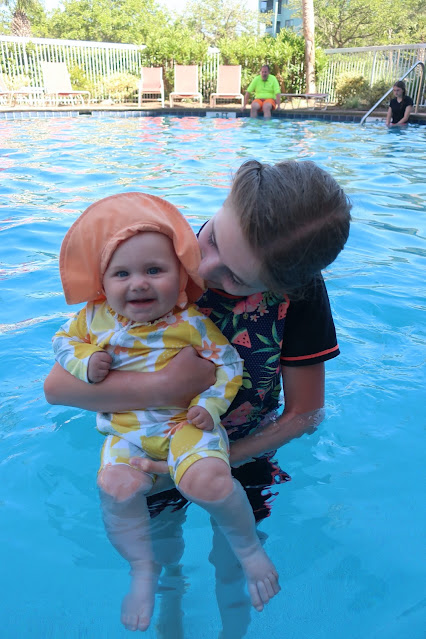 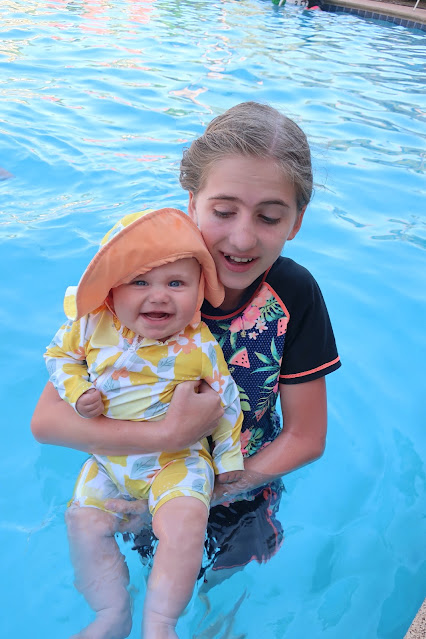 And here they are taking another little swim this afternoon. Phoebe figured out that if she dips her arm into the water, it will get wet and then she can suck the water out of her sleeve. When it's dry she can dip it into the pool to "recharge" her drink.
Clever.
And disgusting.
Pool water is nasty. 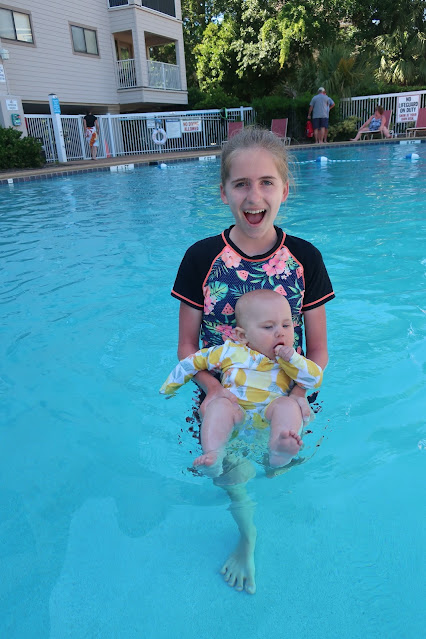 So we might have to rethink the long-sleeve swimsuit for Phoebe. Miriam, on the other hand, got quite the sunburn on her arms (this despite applying sunscreen liberally, several times throughout the day) and is thinking that perhaps what she wants is, in fact, a long-sleeve swimsuit for the beach.
The pool was a little chilly, but the kids largely didn't seem to mind at all because...they're all little fish! They can't see water and not get in it and they've all loved swimming since birth. I can't imagine having a baby be afraid of swimming (though I can imagine having babies run straight for the pool/ocean/whatever without caring that they don't know how to swim yet).
So in that sense all my babies have been the same.
Interestingly, Rosie has put Irie into swimming lessons (infant self-rescuing lessons, probably) because she was nervous about getting into Austin's family's pool. So that's different from my babies.
And David's Millie has begun pulling herself to stand, so he wonders if she'll be walking early like Rachel, who was toddling around at 9 months. It's possible! She very well might!
My kids took their first steps between 9 months (Rachel) and 16 months (Alexander) so there's a wide range of possibility there.
Anyway, it's been fun to take a week off and just be and it's been a joy to share that week with my family.
*****
This afternoon while Alexander and I were sifting through the sand for shells (really these beaches have been pretty empty), he found some big shells and some small shells and decided they were a family of shells. Specifically they were our family. He counted them out—three big shells for Mommy and Daddy and Grandpa, five little shells for "us kids," and one itty-bitty shell for Phoebe.
Clearly she hasn't been around long enough to be part of "the kids" yet, but she'll level-up someday, I'm sure.
Posted by Nancy at 10:50 PM