Phoebe woke up grumpy on Sunday morning and fussed and screamed through sacrament meeting as well as through primary. She took a three-hour nap after church and woke up a happy baby, thank goodness.
*****
The bishop approached Andrew to tell him that there would still be a Zoom link for sacrament meeting; it's just going to be a secret Zoom link because some people find it hurtful that others would attend meetings via Zoom rather than in-person. Weird flex, but okay. At least we get to continue our own little status quo while we wait for childhood vaccines (and then also for Phoebe to be old enough to wear a mask??).
*****
On Saturday morning Grandpa took Rachel, Miriam, and Benjamin on a little bike ride to the park. I packed up Zoë and Alexander with their bikes to meet everyone else at the park (so they could ride around the pond with Grandpa and feel a part of things).
Here's Alexander pushing Phoebe in the swing (she thought bumping into him was hilarious):
Here's Zoë taking off for her ride around the pond, without waiting for Grandpa to even get on his bike. Looking at her squat on that thing, I'm thinking it might be time to raise her seat a little bit. 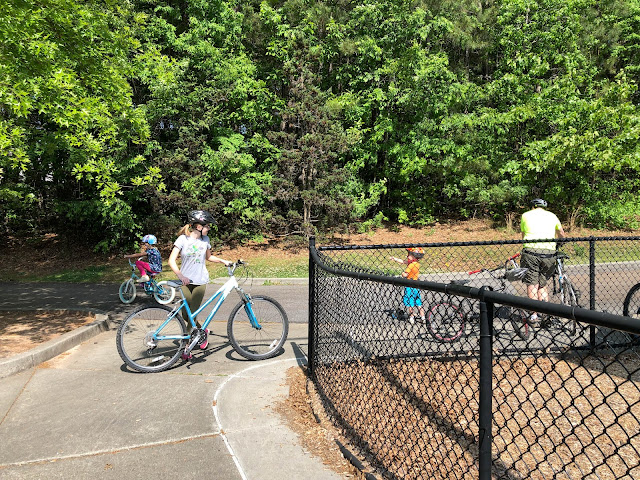 Here are the kids getting some pushes on the swings: 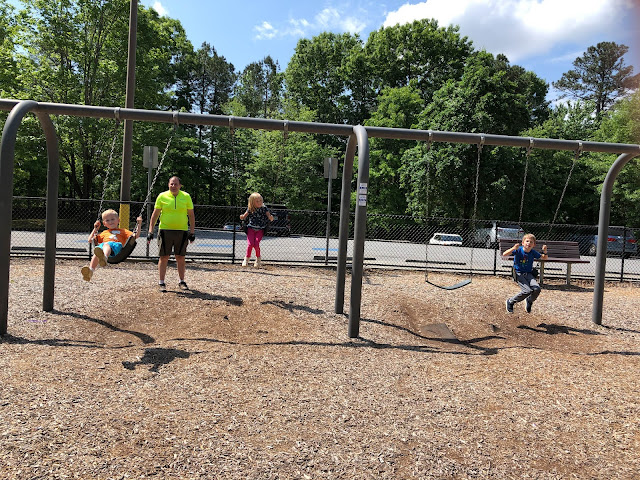 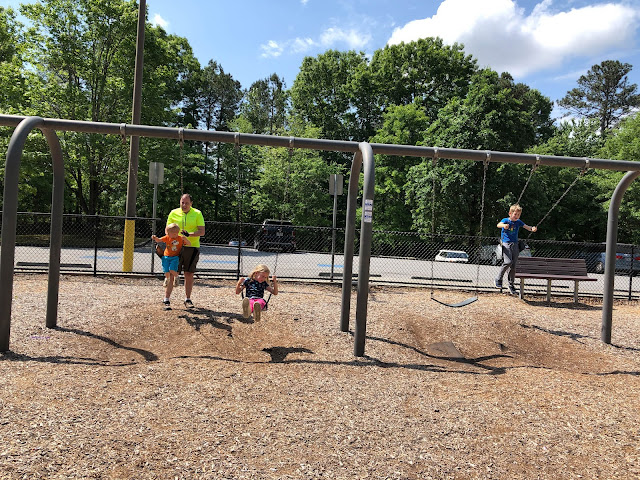 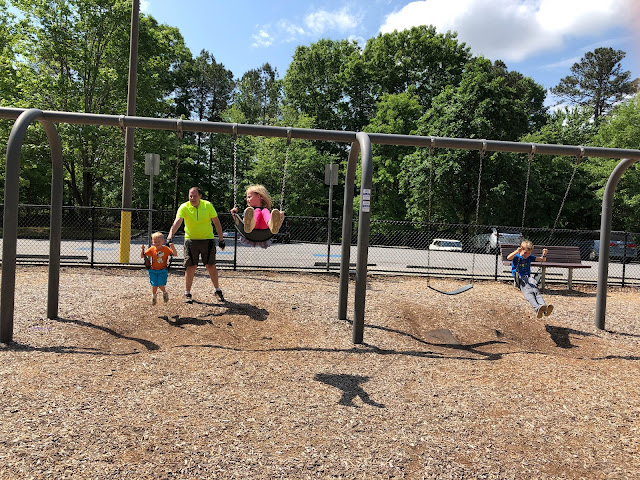 My favourite moment at the park didn't even involve my own children! There was a little boy there with his grandma. He was probably 2 or 3 years old. He was sitting on the bench (behind Benjamin) with his Grandma and I walked past carrying Phoebe and he gushed, "You have a baby?!"
"I do!" I said, stopping and turning so that she was facing him.
The boy reached to his other side, grabbed a little carton of goldfish crackers and said proudly, "I have goldfish."
It was the funniest little exchange.
The big kids stopped off to get doughnuts on the way home from the park; I drove the little kids straight home because Phoebe was feeling like she needed a nap and she's been getting quite vocal about wanting to be put down for a nap these days. Alexander and Zoë were a little upset about missing out on doughnuts, but I gave them freezies when we got home...and then Grandpa ended up bringing a bag of doughnuts home for everyone else, anyway.
*****
We ended the day (hours later) by playing badminton in the front yard. We've been doing that a lot lately. 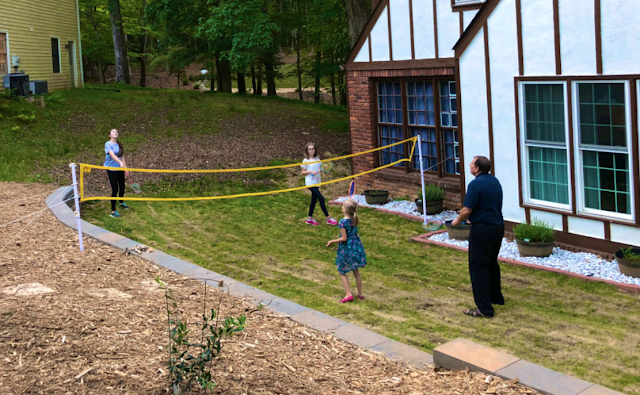 It's true that it can get too windy to play badminton outside, but often the air is quite still around here and we can play just fine. Though evidently I remembered the rules incorrectly and we should be scoring every time a serve is made (so you can score points even when you don't serve). That should make the games go a bit faster!
A long, long time ago I was on my middle school's badminton team. I played mixed doubles. My partner was Mitchell Neighbour, who was this gigantic kid considered by many to be a bully. He wasn't ever mean to me, but a lot of people were afraid of him anyway. I have no idea what's become of him.
I think I have a badminton medal from a competition somewhere, though I have retained no skills in the badminton department. Like, I can't even remember how scoring works (score every serve).
*****
Here's Phoebe chilling in the grass, which she surprisingly doesn't seem to mind very much: 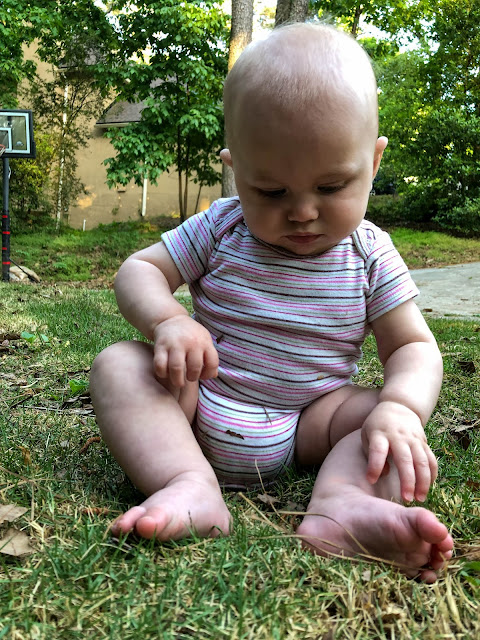 Here she is looking a lot less chill about it: 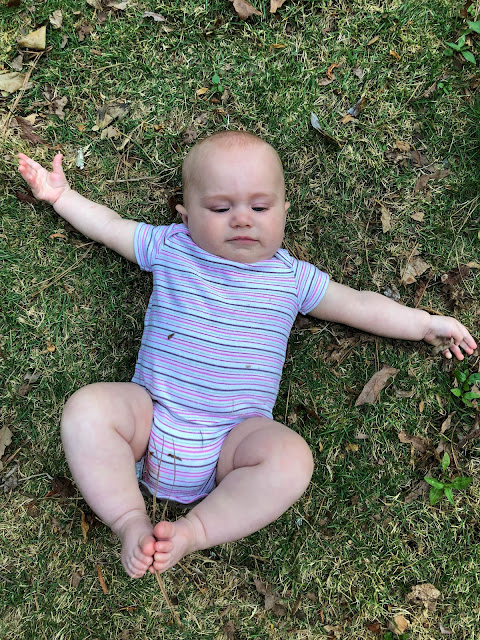 Wondering how she got into this predicament: 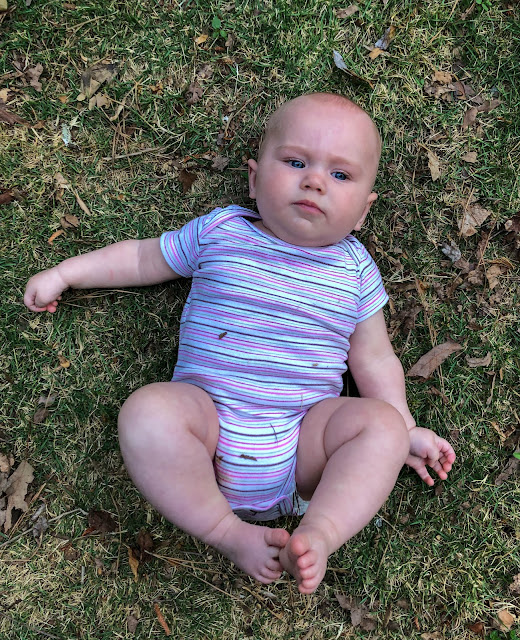 And here she is chilling under the couch, once again wondering how, exactly, she got in this predicament: 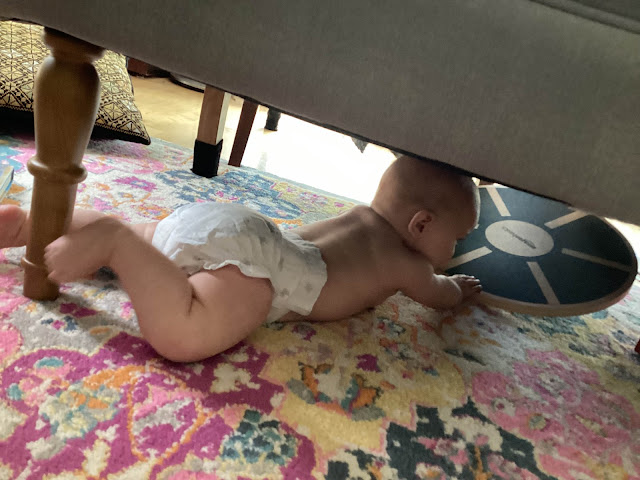 Her problem is that she is mobile enough to scoot around to wherever she wants. But she's not quite old enough to have...like...goals...so she just kind of drifts around the room touching things, gnawing on them, and then drifting to the next thing. And then suddenly she's under the couch and her face is against this board thing and it's kind of dark and...then she cries to be rescued. 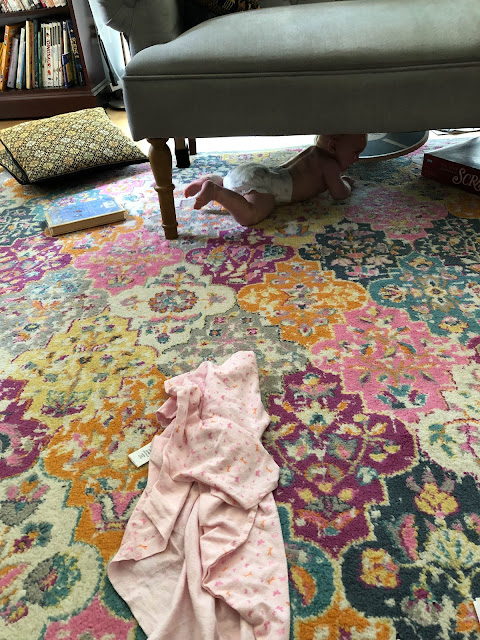 This is kind of how she was when she first started rolling over. Like, she kept doing it—over and over again—and was simply confused about how she kept rolling over. And I was, too. I was like, "Dude! If you don't want to roll over, just stop...rolling...over!" But she kept rolling over and got really good at it and now she can roll wherever she wants to...
Only now she can scoot/army crawl, but doesn't quite understand why she's doing it.
I imagine it will be better and worse for us when she can pick a destination and willfully head there, rather than acting on this ever-present, yet inexplicable, desire of hers to traverse the room.
It's just so strange to me that she can do all these things so early because she doesn't really seem like a motivated baby to me. Rachel was an intense baby; we were often told she was "alert." And she was! She was always looking around, always reaching for the next big thing. She was eager to roll and crawl and walk.
Phoebe wants food (strawberries, please), and a good nap, but other than that she doesn't seem like an eager baby. Rather, she seems to stumble upon her milestones. Like, she doesn't even wanna, but here she goes anyway. And, like, with that attitude, why stumble upon these things so early? She's got months to figure out crawling but she's already bumbling around the living room.
Posted by Nancy at 12:37 AM