We had the world's most delicious blueberries with dinner this evening. Dinner was leftovers: tomato soup, tacos, pancakes, and dal. The blueberries were not leftover, but they were heavenly. Even the big ones, which I usually avoid because they are sometimes sweet and mushy, were tart and juicy (just the way I like them).

Phoebe enjoyed playing with some leftover green beans, but she got really excited about those blueberries.

She looks like a normal, sweet & innocent little baby, right? 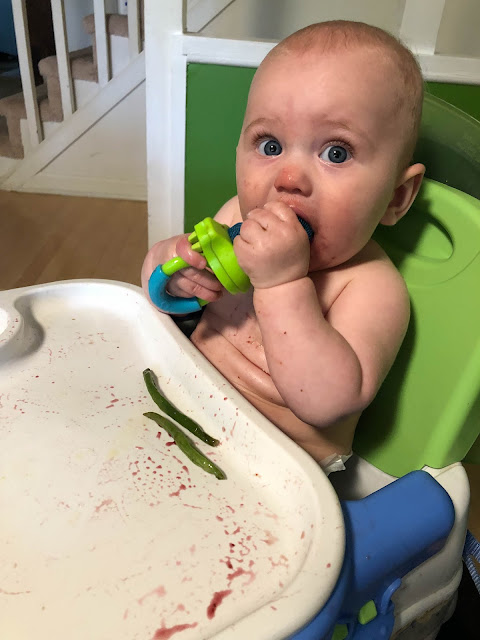 But that's where you're wrong! She is, in fact, a lean, mean, berry-munching machine (rawr!): 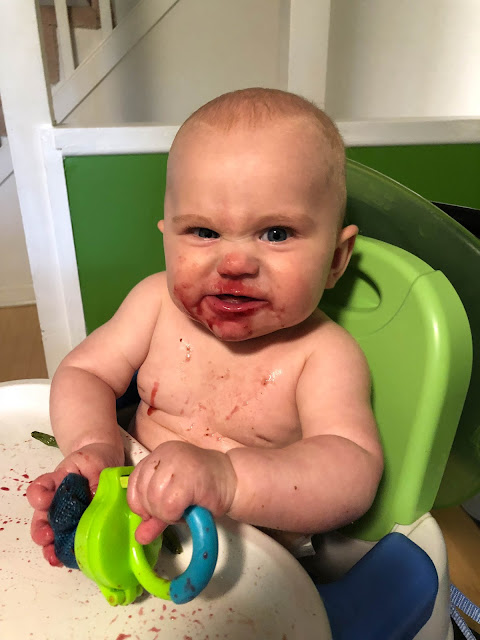 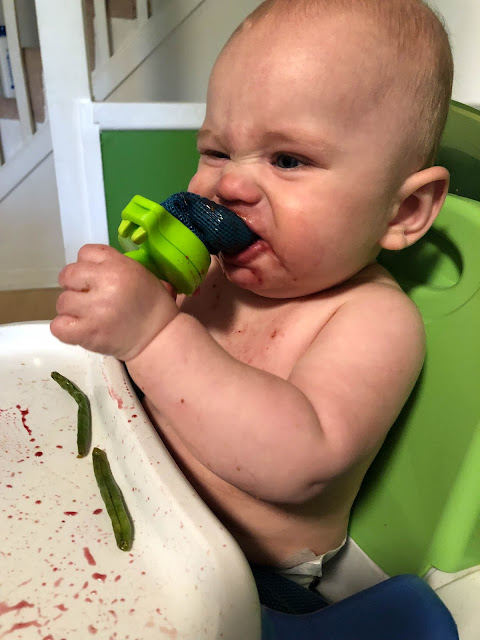 But all that work is worth it because they are so yummy! 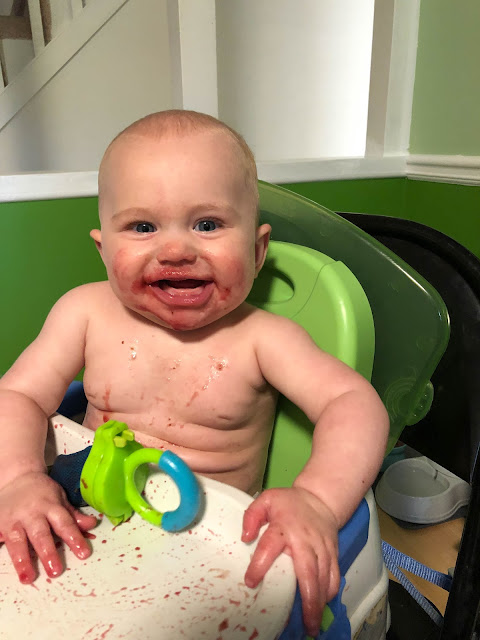 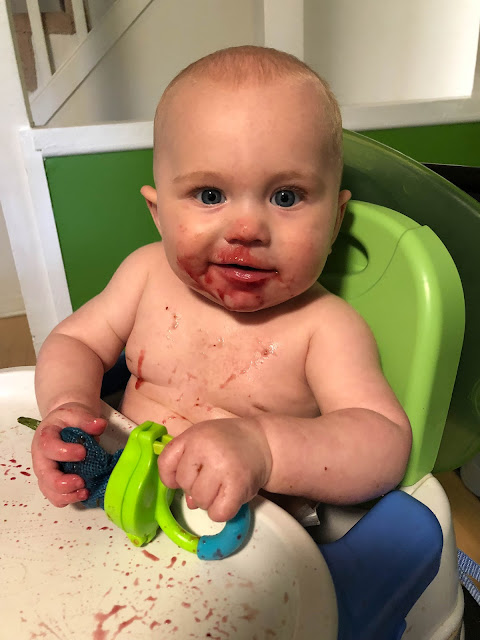 I love how she hooks her little toes onto the underside of her tray. She also insists on riding in her stroller with her feet propped up on her little lap bar thingy. It's pretty funny. 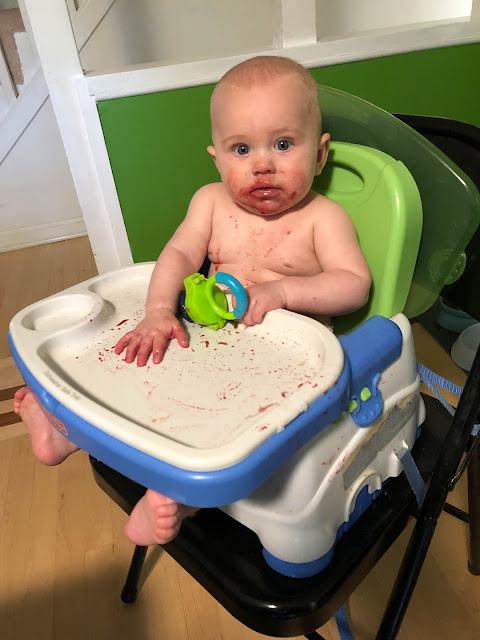 And here's Phoebe "finger painting" in the berry juice on her tray. 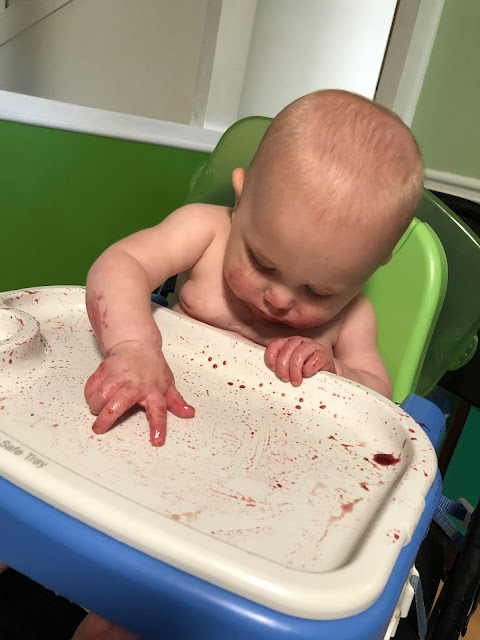 Chances are high that I'll never get around to doing that with Phoebe (I don't have the time or inclination to be an influencer mom), but I'm pretty sure that painting her tray with blueberry juice is an equivalent experience. 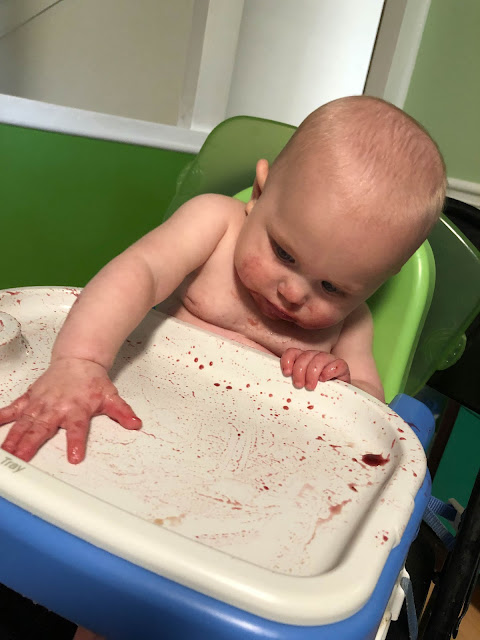 I read the book The Triggering Town by Richard Hugo this past semester and rather enjoyed it. In it he mentions that "reading is important if it excites the imagination, but what excites the imagination may be found in any number of experiences (or in a lack of them)" (p. xi). Essentially he's contradicting the oft-repeated advice "to write well, read." Not that reading to write isn't important; it simply may not be the most important thing because really in order to write well you must...write. But, also, to write well you must live.
What that means, though, is a question in and of itself.
Back when blogging was popular (it's really not very popular anymore, yet here we are), there was the idea floating around that people were doing things simply to blog about them. I'm sure that was true. I'm sure it's true today, as well...just perhaps not for blogging.
I'm not sure that motivation is terrible because recording "the thing" has the side-effect of, you know, actually experiencing "the thing." Or, at least, experiencing something.
And those things lead to stories. And stories are beautiful.
So, Phoebe, I'm not likely to ever make up a nice, neat finger-painting activity for you. But, look—you got to experience something else instead. And I think it was probably equally stimulating for your development.
You're welcome.
While I'm here, there are a few other ideas from Hugo's book that I enjoyed:
Perhaps I'll turn this blueberry smashing moment into a poem, since clearly I'm as obsessed with Phoebe as she is with blueberries (not that I can really blame her because this batch of blueberries were top notch).
Posted by Nancy at 1:35 AM