Our next stop was Oatland Island Wildlife Center, which is run by the Savannah-Chattham county school district (something I thought was pretty cool). We had wanted to go last year because our neighbours highly recommended it, but I think it was closed due to COVID.
Here's our group standing in front of the visitor's center, which was once the retirement home (?) for the Order of Railway Conductors. There wasn't much for us to do in the visitor's center, but I imagine there are classrooms and things for school groups to use. There were certainly other areas of the center that appeared to be geared toward school groups (such as the sugar cane processing area). 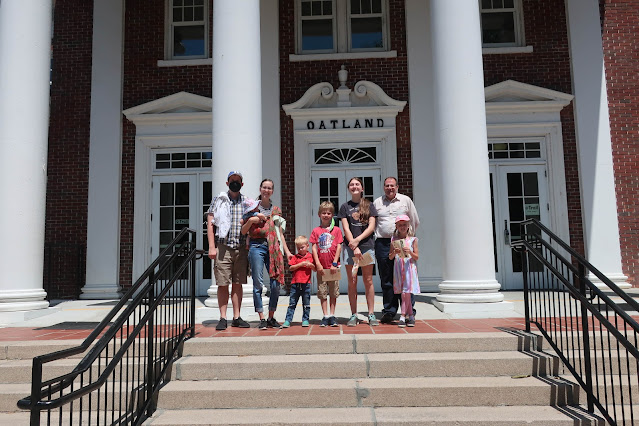 Miriam had the camera this time, so she's not in many pictures. But here's a lovely picture she took of a snake: 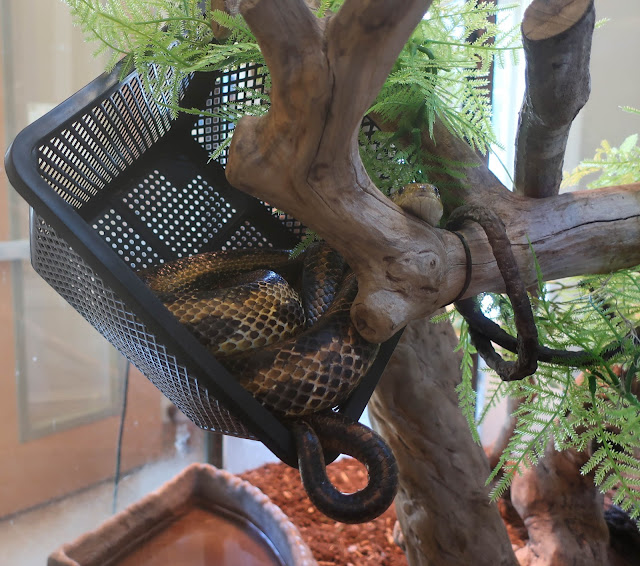 And here we are about to enter the "enchanted" forest (I think that's what the sign said): 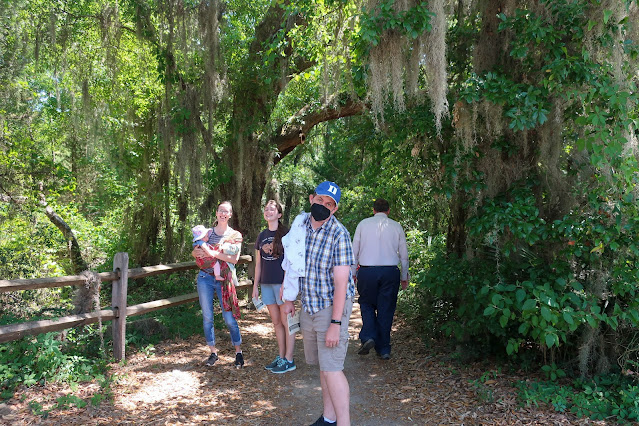 One of the first creatures we came to was...an owl! 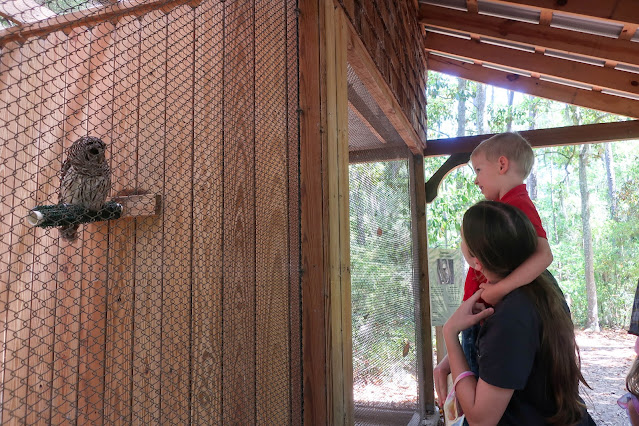 Alexander is convinced that he can speak owl, so he was "hoo-hoo-hooing" his little heart out.

Speaking of owls, I forgot to mention that our little owl-loving boy forgot to pack any of his owl loveys on our trip—he didn't bring his owl blanket or any of his stuffed owls—and when he realized this he was devastated.

Andrew was already out at the grocery store, so I texted him to see if he could possibly pick up an owl for Alexander to snuggle at night. But if not an owl, then just...something.

Grandpa suggested that I do this as well—because little guys can't live without their owls!—which we later teased him about because have you ever heard of Dan and Housie (sp?), Andrew's favourite blankets. They were so beloved that he named them and wore them to rags.

To punish Andrew one day—the reason why has been forgotten—Grandpa took Dan and Housie and put them on the top shelf, within Andrew's sight but far beyond his reach. No matter how much Andrew cried, his tears could not sway his father.

But Alexander blubbers a little about his forgotten parliament (because he really has quite the collection of owl loveys) and Grandpa says, "Text Andrew to see if he can find an owl for Alex." Ha!

Daddy couldn't find an owl, but he did manage to bring home a stuffed penguin, which is a still a bird, so made Alexander feel quite happy. He immediately named it Waddles and declared that it was Pengui's mom (because, you see, he already has one little stuffed penguin at home named Pengui).

(In fact, there was a stuffed owl at the grocery store, but it was made of some weird scratchy, glittery material (the same material Waddle's feet are made of) and Andrew didn't think it would make a very good bed companion, so he opted for the penguin, which was fine).

Anyway, Alexander is still obsessed with birds and found a sneaky way to add to his aviary. 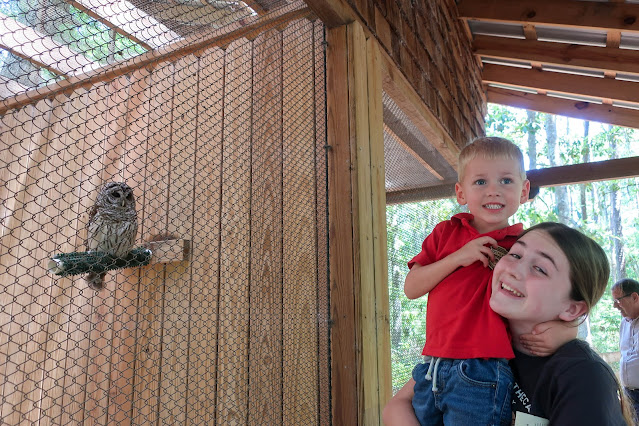 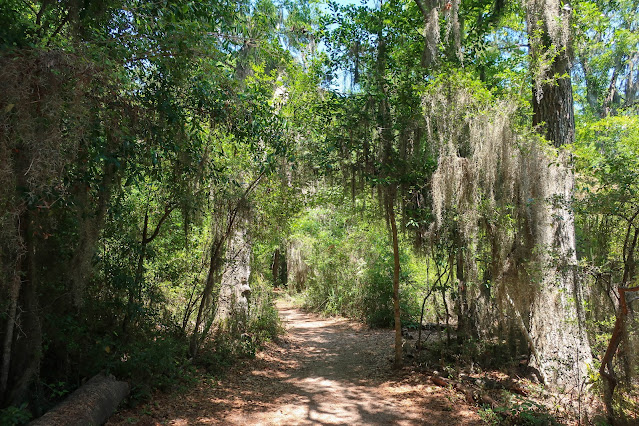 Grandpa asked whether Spanish moss is harmful to the trees it grows on and, in fact, it's not. It uses trees as structure, but takes all its nutrition from the air through its leaves (which explains why I saw it growing on a chainlink fence; I'd also wondered about that). It has no root system at all. 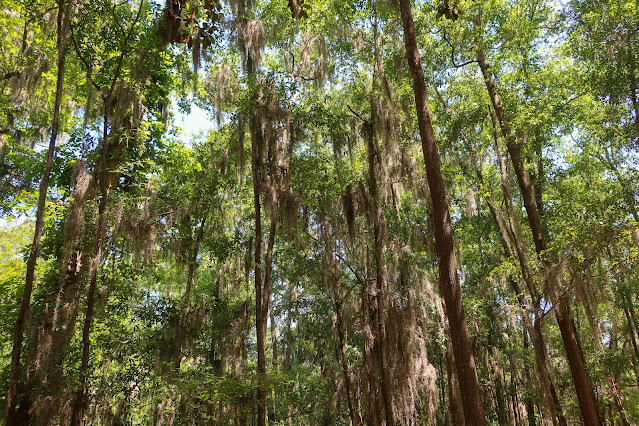 Soon after leaving our first batch of birds, we came across this alligator nest replica. Quite unremarkable, but remember it for later. 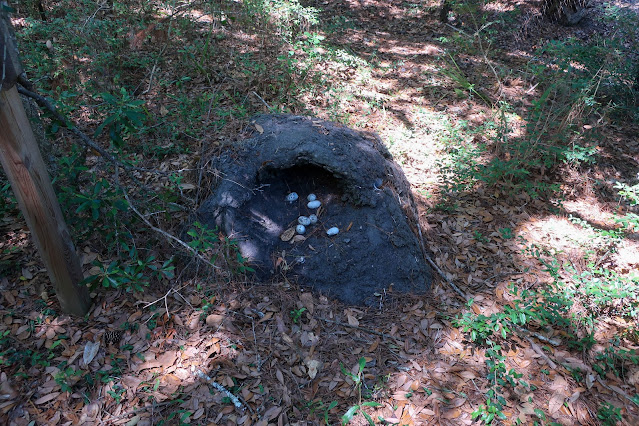 First I want to tell a quick story about the bird habitats. The animals at the wildlife center are typically either injured and have come to live out the rest of their life in an enclosed environment when otherwise they would die, or they are wild and are free to come and go as they please (this is the case with the squirrel and waterfowl and gopher turtles and any number of other creatures). The habitats are quite small and have a sign (that we neglected to take a picture of) explaining why this is so.

It says something to the effect of: "To the untrained eye this enclosure might seem small. In reality, the enclosure is small because the bird is injured and cannot fly; a small enclosure helps keep the bird safe."

I understood the sentiment behind the creation of the sign, but kept laughing about "To the untrained eye this enclosure might seem small. In reality, the enclosure is small..."

Anyway, we left the birds and approached the crocodilian trail, passing that nest in the process. We stopped on the boardwalk and spotted a few alligators hanging out in the marsh, but these alligators were behind a double fence, so clearly they were meant to stay in the marsh.

There really are alligators in this picture (they are terrifyingly good at camouflage): 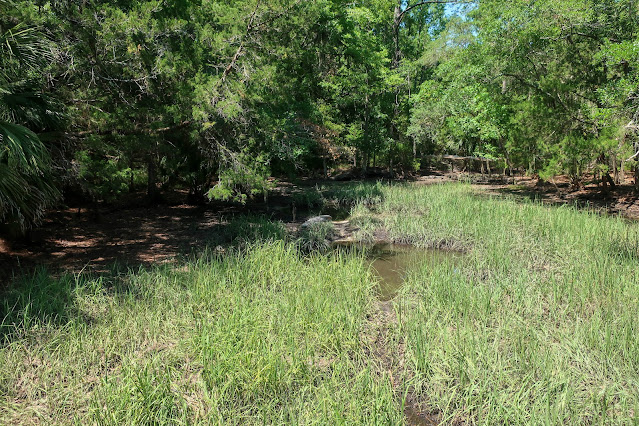 So, we're looking at these gators, and Andrew said, "Did you see the alligator nest?"

And he led me to the...replica.

"Aren't alligators rather protective of their nests?" Grandpa pointed out (though he also originally thought the nest was real). "I don't think they'd want an actual nest right on the side of the trail..."

Andrew felt pretty silly when all of this was pointed out. Alligators do make nests like that—just holes in the ground filled with eggs—but they're about as good at camouflaging their nests as they are camouflaging themselves (which is to say...they hide things rather well) and they stick around to defend their nests, even though they don't incubate their eggs...which I guess makes sense since they are cold-blooded...and can cold-blooded animals incubate their eggs? Probably not; so alligators rely on decomposing leaves (and probably some good ol' fashioned sunshine) to warm their eggs. If the nest is habitually cooler than 30°C,  all the eggs will be female; but if the nest is kept warmer than 34°C, all the eggs will be male.

Here's me sitting with five of my brood in another replica of a nest: 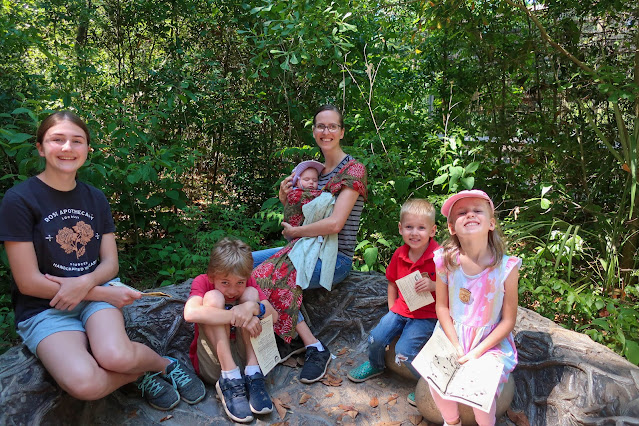 This nest didn't fool anybody. We know a decoy when we see one (now).

When we got to the deer enclosure, we looked over the fence, saw a small group of white-tailed deer and mused, "Huh. Looks like our yard."

There was what appeared to be an enrichment toy in the enclosure—a large white ball (about as large as the "eggs" Alexander and Zoë are sitting on in the nest) just behind a deer. Grandpa said, pointing, "Oh, look! A deer egg!"

Multiple members of our party (including Andrew) said, "Oooh! Where?!"

Let's see...here's sleeping Phoebe (she likes to hang onto the rings of her sling; I've only pinched her fingers once while adjusting things...I know to check where her hand is before tightening things now!): 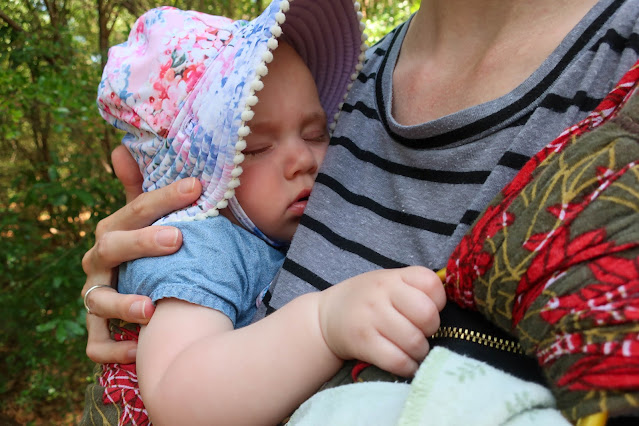 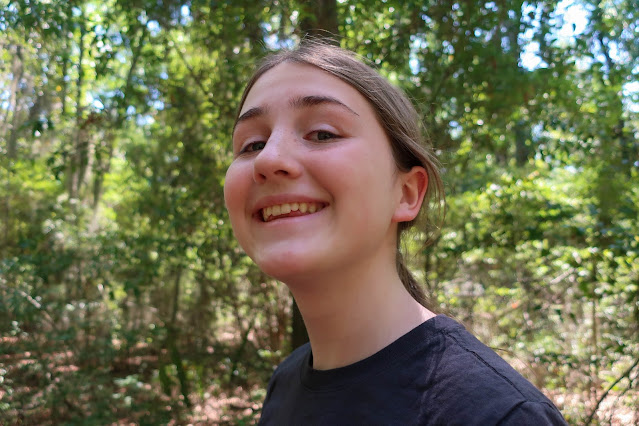 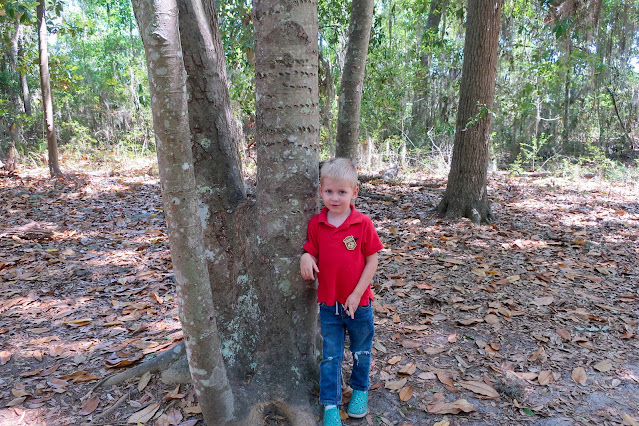 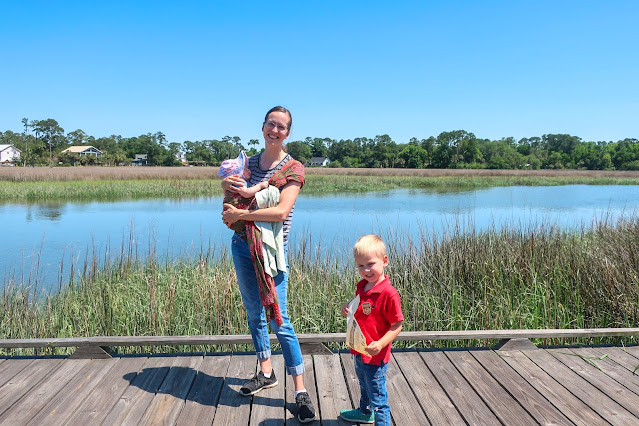 Here we are together, save for Miriam, who is behind the camera: 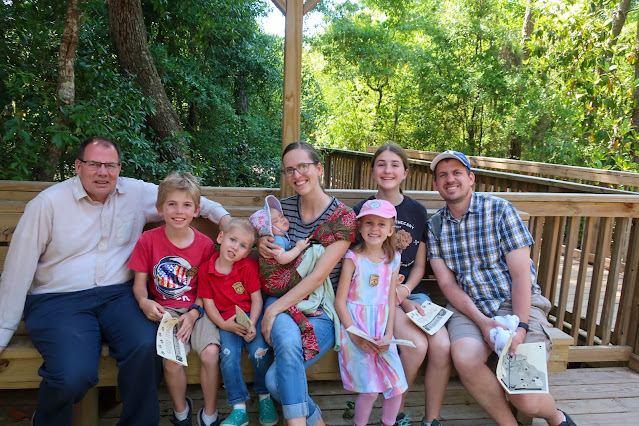 I think here we were looking at some mountain lions, which mostly just lazed about in the shade. 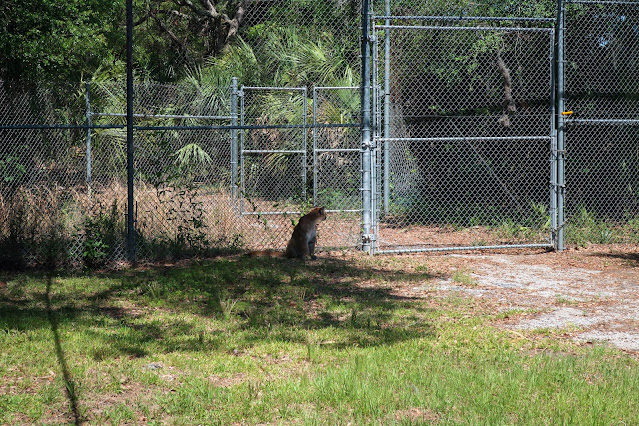 Here's Grandpa, Zoë, and Benjamin taking a little rest at the Heritage Homesight (it would have been really cool to see them processing sugar cane, but I'm assuming that's reserved for field trips and things): 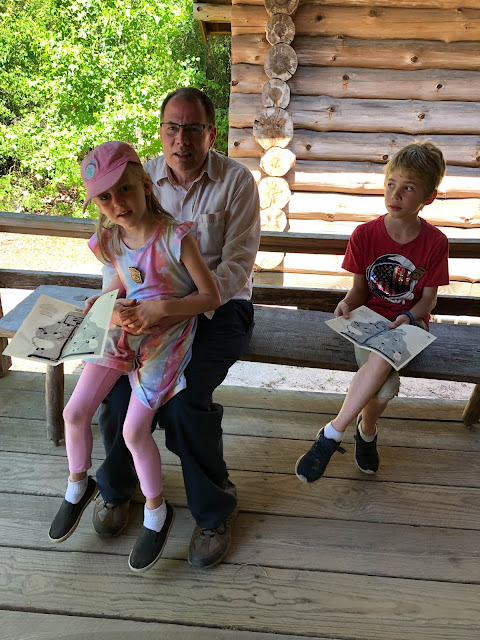 And here we are heading down Tornado Trail to Ledbetter Pond: 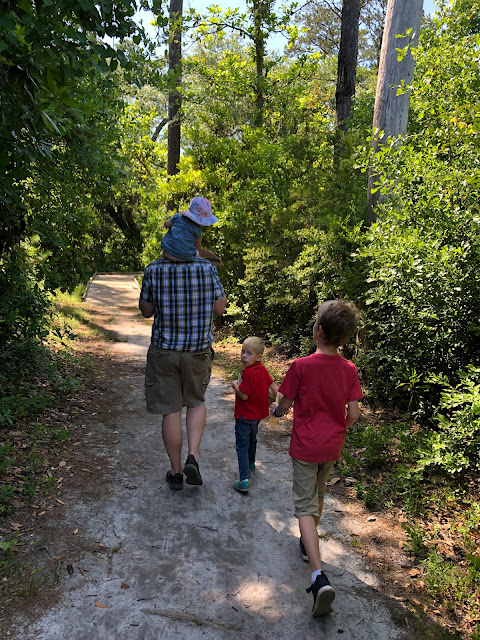 The pond was covered in algae, but there were a billion little turtles peeking their heads up through the surface. The kids enjoyed using the binoculars to look at birds. 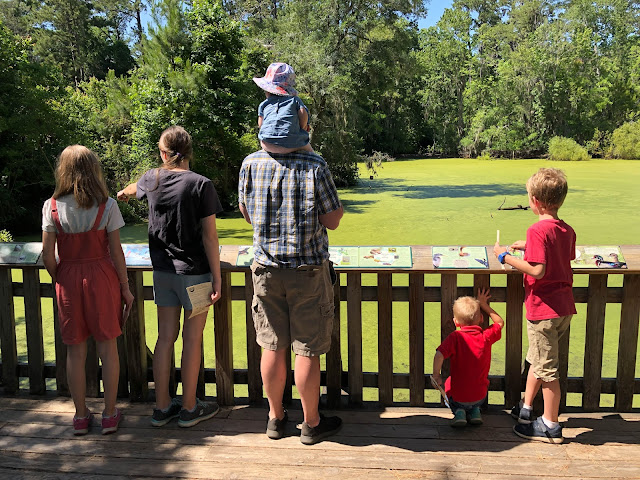 Here's Phoebe, finished with her nap, hanging out on Daddy's shoulders (his ears make excellent handles): 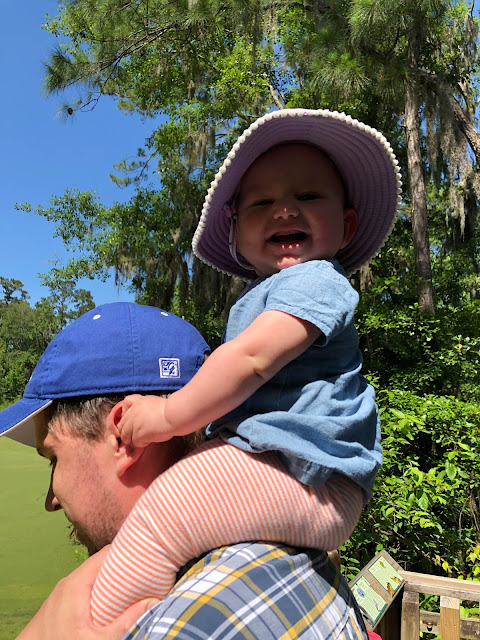 Here she is giving Daddy's head a little hug (sorry to have caught you mid-yawn, Andrew...though it kind of looks like you're trying to bite Miriam's head off): 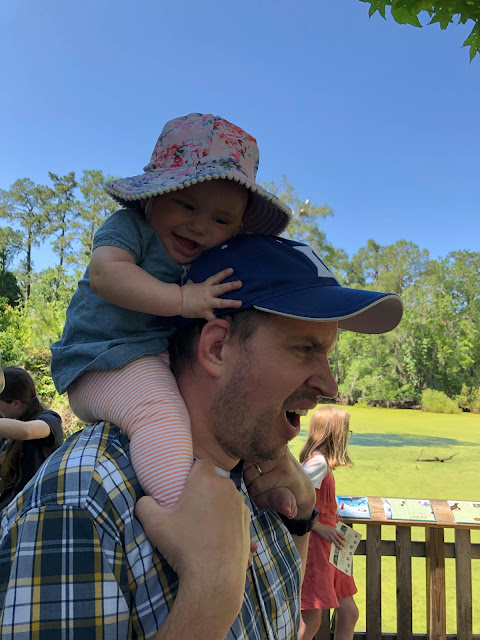 Here she is giving his head a little slap, slap, slap: 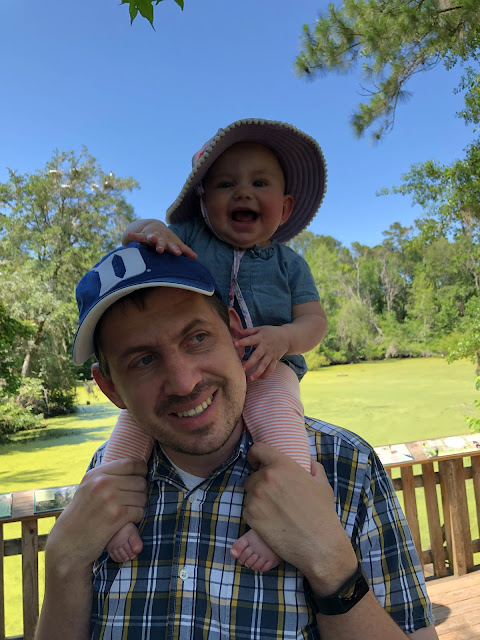 And here's one more just because she's adorable: 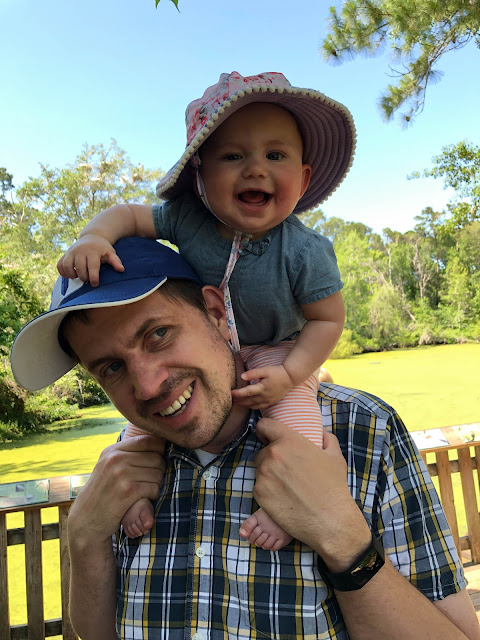 This tree was particularly fun to look at through the binoculars (they had a couple of those big observation binoculars, mounted to a stand): 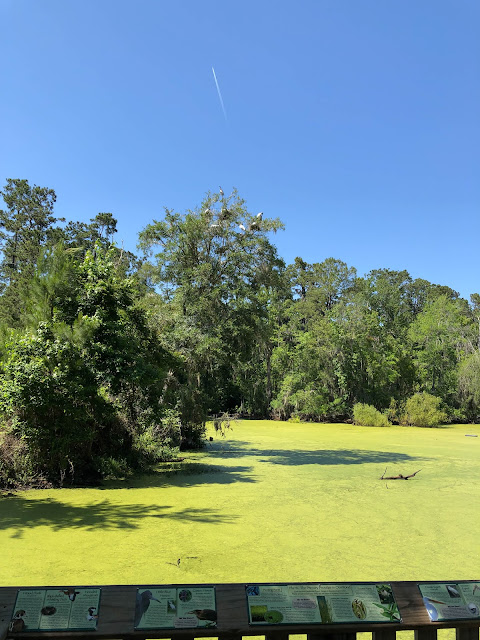 It's full of wood storks, which typically live in South America (Brazil seems to be their main home). There are little pockets of breeding grounds up around here, though, with...this very tree...seeming to be one of those places. 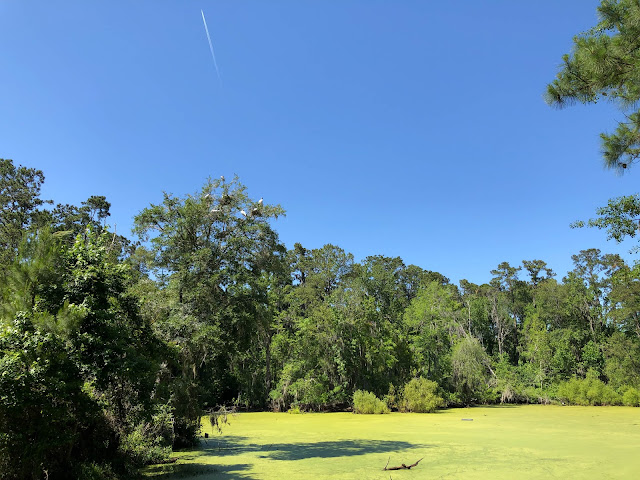 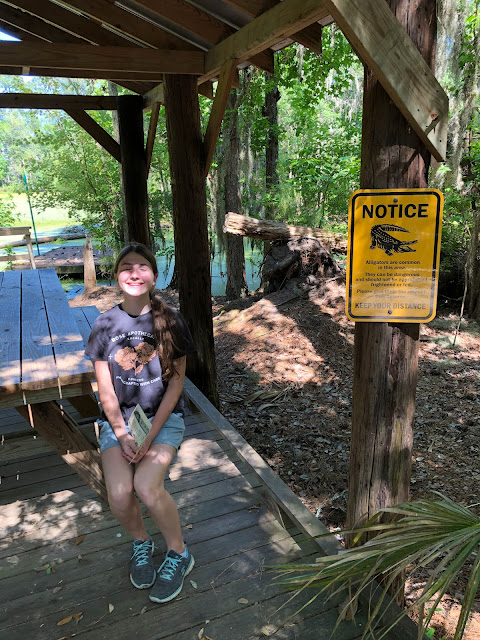 Here we are getting to the very end of our walk, which led us to a little frog pond before sending us back through the visitor's center. As we approached the frog pond, I said to Rachel, "Oh, look! There's a little frog climbing over the fence."
"How can you even know that from here?" she asked.
I just kept walking to the pond, waiting for her to figure it out (it was because all the enclosures had silhouette of their hosted animals nearby and the frog pond happened to feature a giant silhouette of a frog climbing over the fence). 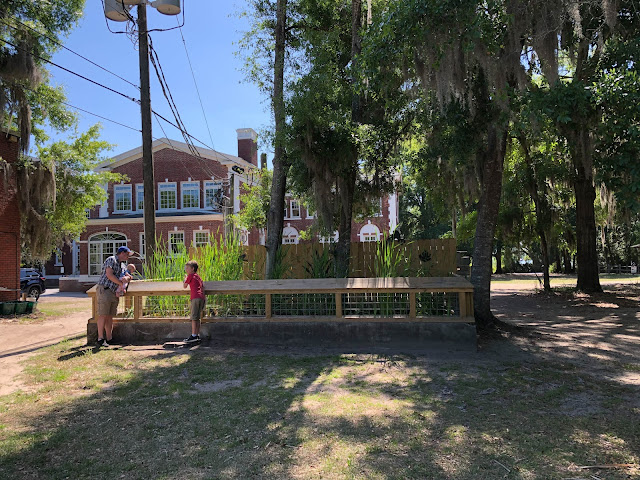 We figured we'd stop to use the restrooms on our way out of the park, so everyone had to strap their masks back on. Andrew helped Alexander put his mask on and left him floundering on the stairs with it over his eyes: 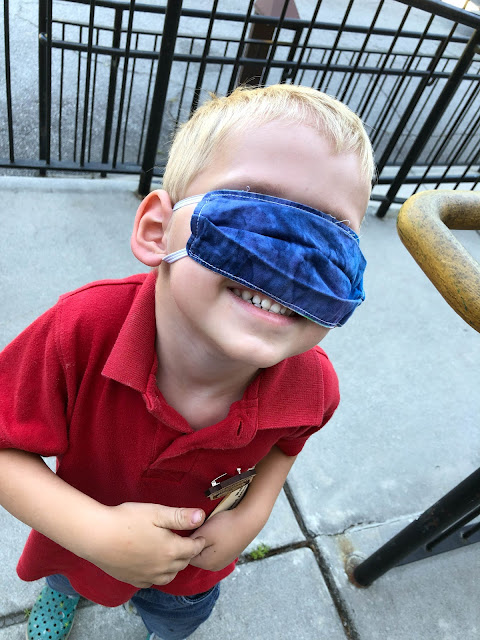 All in all it was a wonderful stop; I'm sure we'll visit again!