It's true! It's true! We have a seven-year-old on our hands and she's wonderful!

Here's Zoë standing in front of our new birthday tree(s): 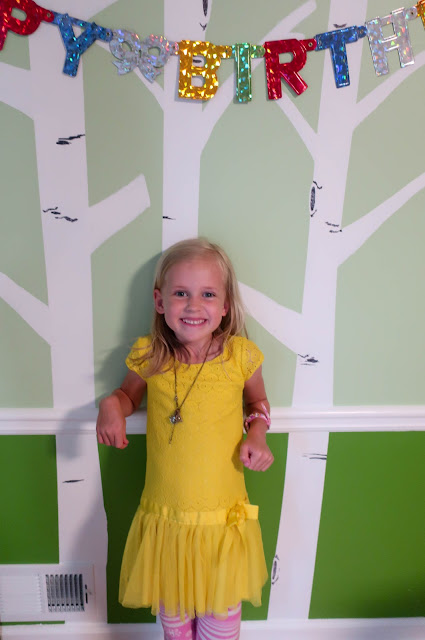 I literally just painted them this weekend (still working on adding details).

Here's Zoë checking the time on her watch so she can announce the time to the family: 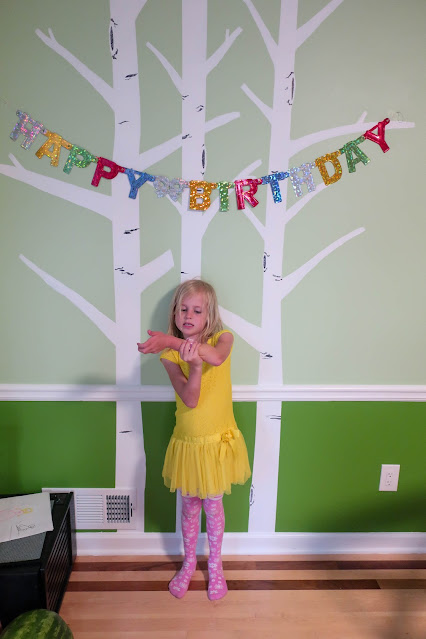 Grandpa came for dinner and stayed for "birthday balloons" and cake.

Here's everyone getting to work on their birthday balloons: 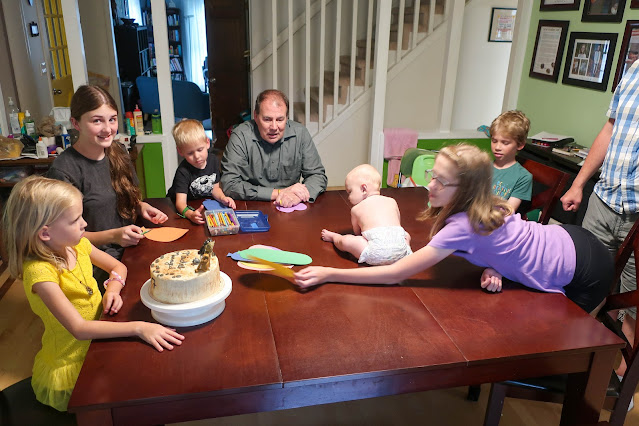 And here's a picture of Zoë with her birthday balloons displayed behind her: 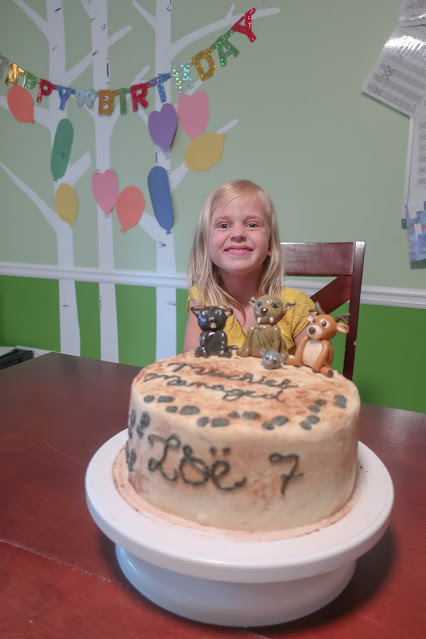 She wanted a Sirius Black birthday cake. He's her favourite character (and he tragically died in book five, which she recently finished). Rachel wasn't quite sure of how to do a Sirius Black cake, so she went with a Marauder's Map theme instead. There are footprints leading across the cake with the words Mischief Managed on the top, along with fondant figurines of Padfoot (Sirius Black), Moonie (Remus Lupin), Wormtail (Peter Pettigrew), and Prongs (James Potter). 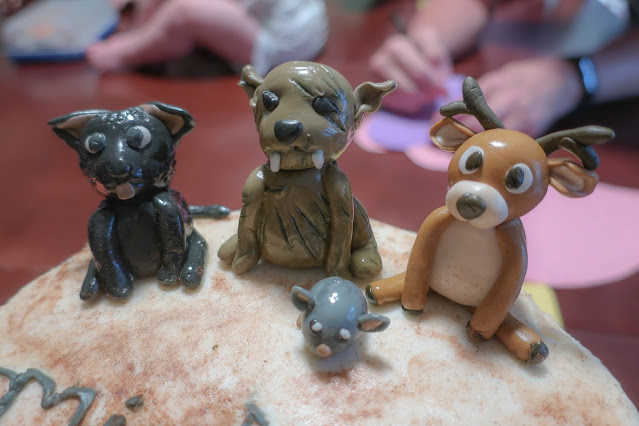 Miriam is better at cursive than Rachel is (despite Rachel's professed years of practice), so she did the script on the cake. Neither of the girls could remember what a cursive Z looks like and they ended up settling on something that to me looks like a cursive L. 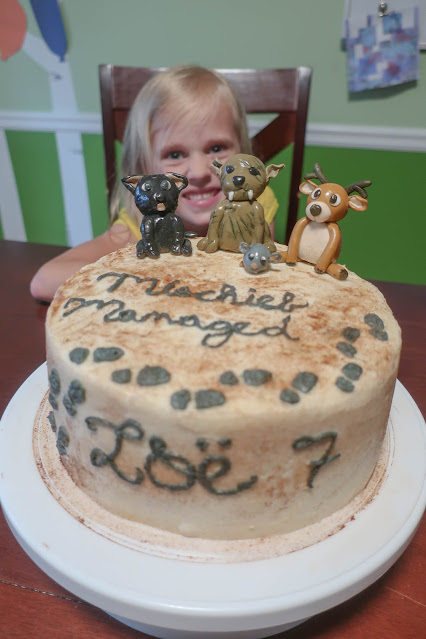 We could stand to review our cursive skills, I suppose, though the fact that the girls don't know it well could be considered a failure of the public school system, not our homeschool. Benjamin's knowledge of cursive is...rudimentary...at best. But he's got dysgraphia so...that's to be expected. Zoë is quite excited to learn cursive, herself!

Anyway, back to the birthday balloons! Here's what people had to say about Zoë this year...

and said "Zoë! You are such a great and dedicated learner! Math, reading, Duolingo—you've been learning so much!"

Grandpa said, "Zoë is a curious person who loves to learn. She loves to play with her siblings and her friends. She is a great Duoingo streaker and I love to get her texts and emails."

Zoë likes reading and books
And got some really good looks.
She likes waffles and crepes
And things rose and grape
And really likes to help cook.

I said, "Zoë is a helpful big sister. I've appreciated having Zoë hold Phoebe, sing & play her ukulele for Phoebe, put on dance shoes for Phoebe, and fetch burp cloths. She is as magical as her love of rainbows, unicorns, fairies, and mermaids. She always works hard on her school assignments and writes beautiful poetry. I love you!"

Benjamin wrote an acrostic, involving an on-going zombie apocalypse game they play together (lest you be alarmed at his description of her):

Zombie
Optimistic...
Even though you were bitten by the birthday zombie!

PS. It wears off in one day!

Rachel wrote, "I love Zoë because she is so smart, creative, and willing to learn. I like seeing the colourful outfits she picks out every day, and I like reading what she writes for school because she writes so well. I also love hearing her play music and sing because she does it happily and with a lot of enthusiasm."

And Alexander brought us home with, "I LV U."

With birthday balloons (family calendar time and a brief FHE lesson on ambition) under our belts, it was time to dive into cake and ice cream. Zoë requested a vanilla cake with peach filling, so naturally Rachel made exactly that...from scratch. It was delicious and beautiful, even if it all initially melted in the sweltering humidity and turned into a gooey, nearly incorrigible mess. Rachel managed to get it to behave, though, because she works magic in the kitchen.

Here's Zoë being sung to: 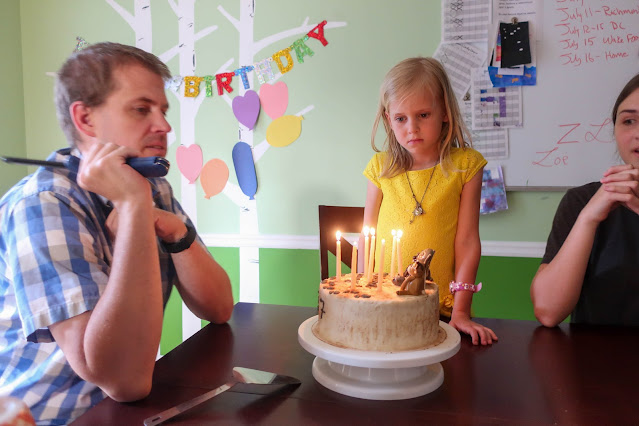 And here she is blowing out her candles: 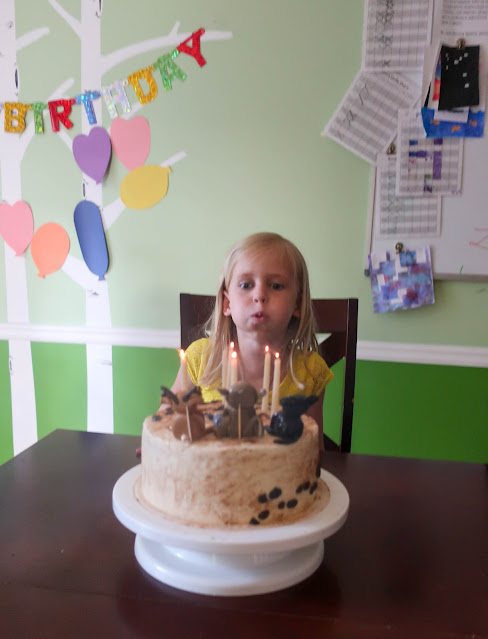 Here she is explaining that she really wants the piece with Sirius Black/Padfoot on it: 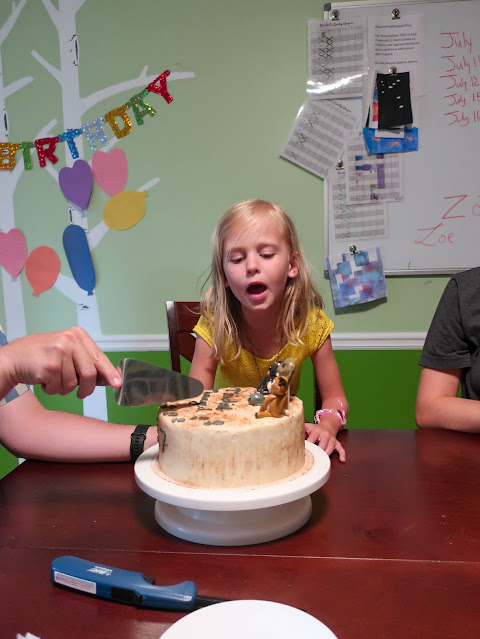 And here she is taking Padfoot/Sirius from the cake after Andrew told her he wasn't going to cut that part but that she could still have Sirius: 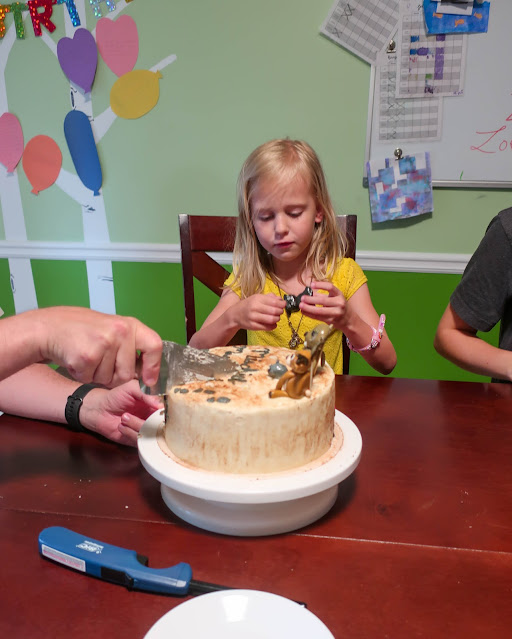 And here she is eating Padfoot (even the sight of her eating that much fondant makes me feel ill...but to each their own, I guess): 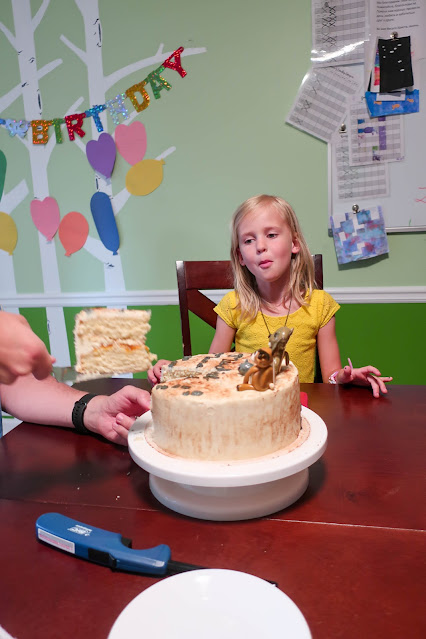 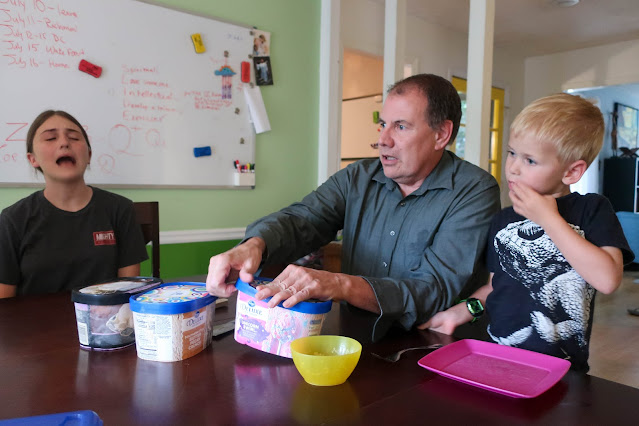 I do not know what is wrong with Rachel in the picture above. 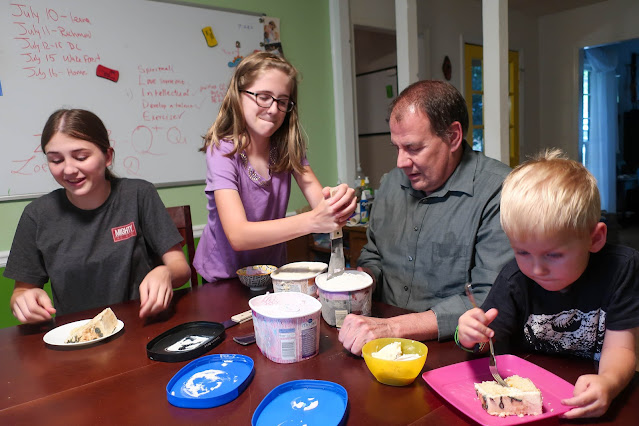 Benjamin got to claim Wormtail, which he perched on his slice of cake: 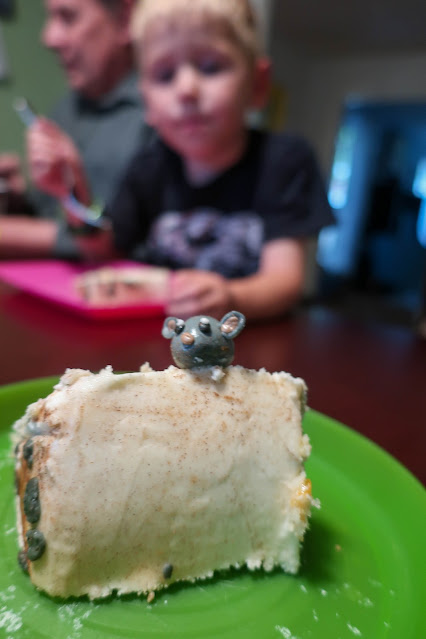 And here's a picture of Miriam simply because she's gorgeous: 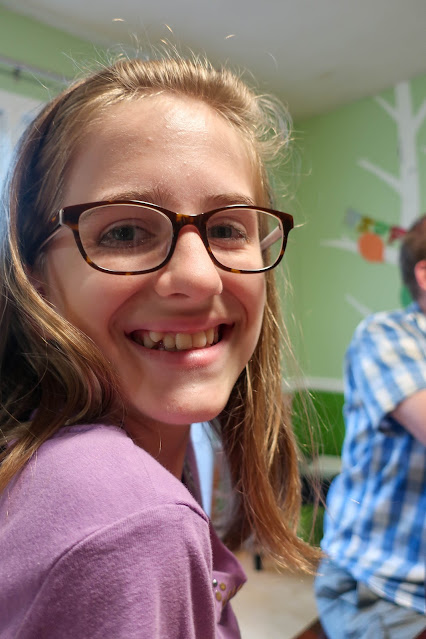 It was lovely to get to celebrate our Zoë...even if we didn't throw an official party for her. Happy birthday, Zoë!
Posted by Nancy at 12:06 AM