The Coastal Discovery Museum in Hilton Head was really quite neat! They had a few indoor exhibits (which we didn't spend much time at) and several outdoor exhibits as well.

The lady who greeted us at the welcome center was, very clearly, from New Jersey. A surprising number of people we ran into on this trip seemed to be from that area. Anyway, she told us about the art exhibit and how to get to the walking paths and insisted we visit the "Kids' Own Room."

Imagine my surprise when we were finally able to peel ourselves away from the desk (she was chatty) and followed her directions to the Kids' Own Room, only to find it clearly labeled "Kid Zone."

That made a lot more sense. I think I wouldn't have been so confused if she hadn't kept tacking "room" on the end of things. Anyway, the Kid Zone (room) was rather delightful.

We got to see horseshoe exoskeletons in varying stages of development: 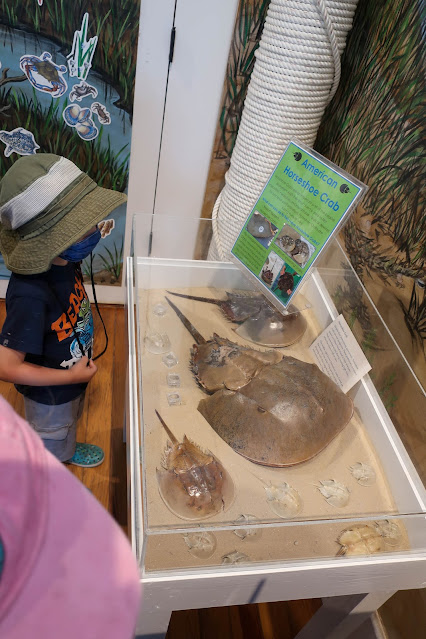 They even had a tank with juvenile horseshoe crabs: 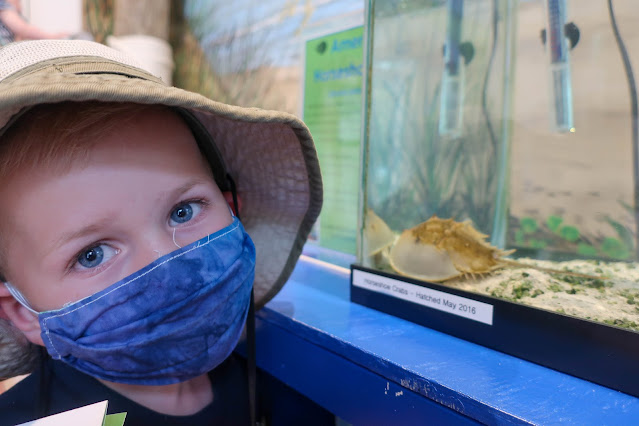 Phoebe was quite surprised when this turtle she was looking at moved to have a better look at her: 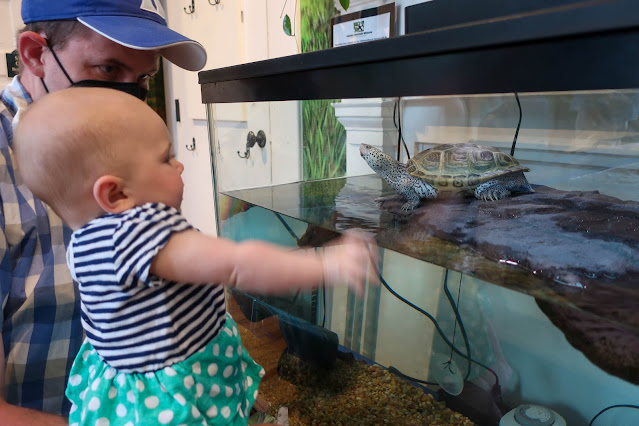 From what we were told at the welcome desk, the turtle just loves kids and seems to enjoy looking at them as much as they enjoy looking at him.
This little tide table was a fun way for the kids to identify various things they'd found on our visits to the beach: 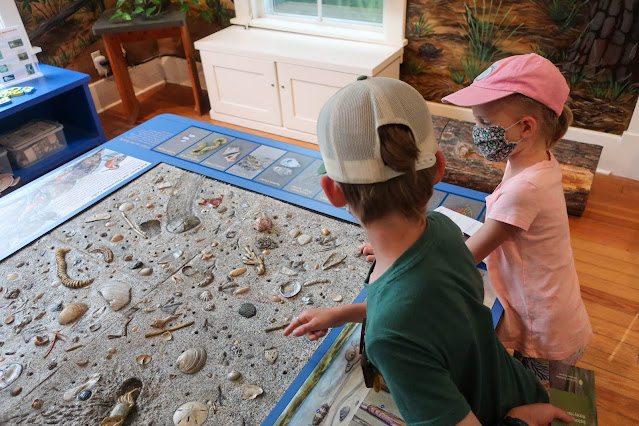 I think the art exhibit by Hitnes was my favourite.
It's called The Image Hunter: On the Trail of John James Audubon and features some beautiful mixed media artwork—paintings layered in shadow boxes with various found objects (cicadas, snake skins, Mardi Gras beads, paint can lids, etc.). Lots and lots of birds, which Alexander was happy about. 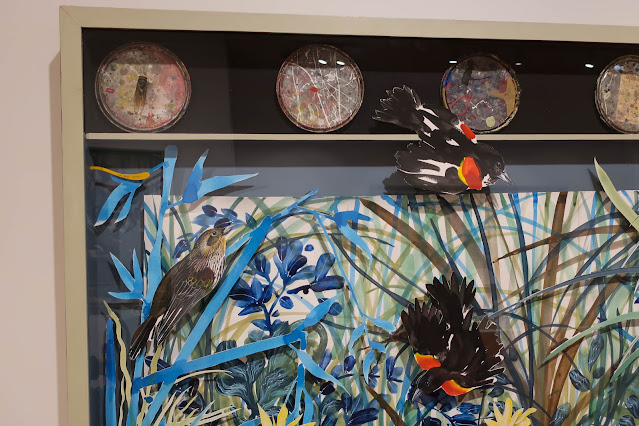 In addition to the shadow boxes, there was a collection of tiny etches. Here are the kids and Grandpa watching a video about that process: 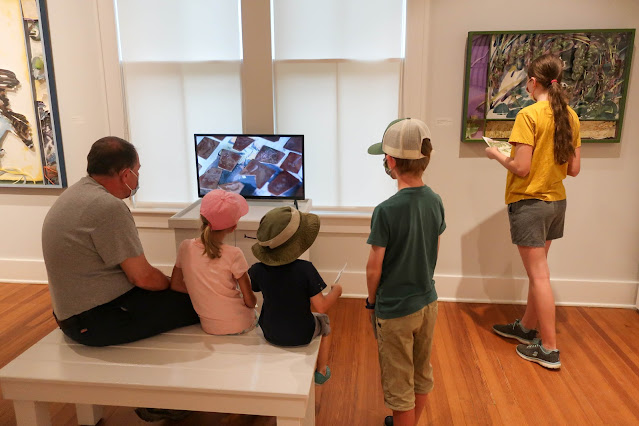 These were bound into a teeny little book (hey—Uncle Patrick knows how to do that!): 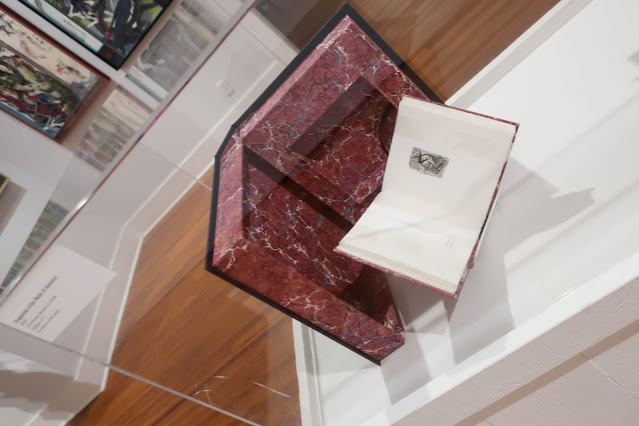 As happy as Phoebe was to look at all the pretty pictures... 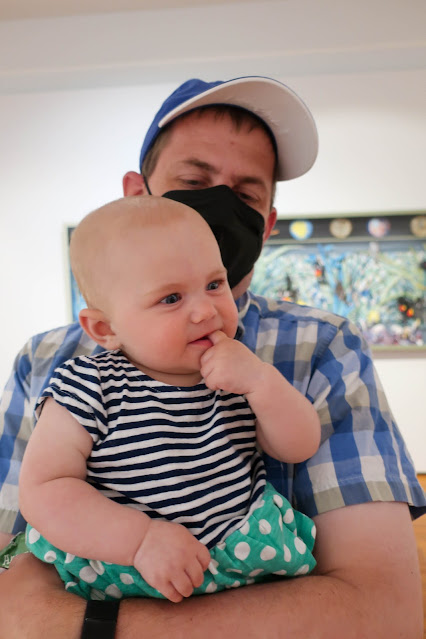 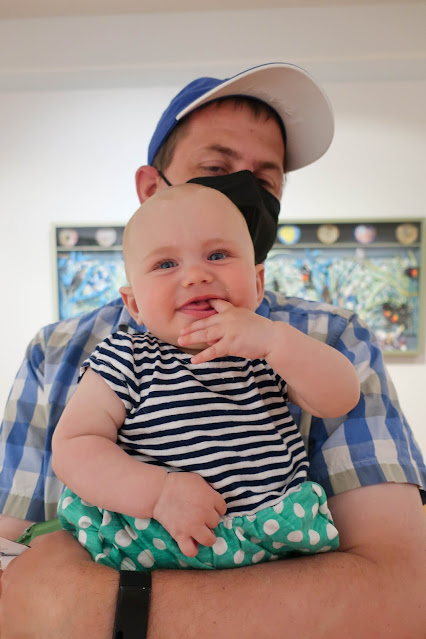 ...we didn't want to keep her inside too long. Masking is about impossible (and, in fact, is discouraged/inadvisable) at this age. With the amount of drool and/or spit up coming out of Phoebe, her mask would be drenched within minutes of putting it on her!

Anyway, we took her outside to wait for everyone else to finish up inside. 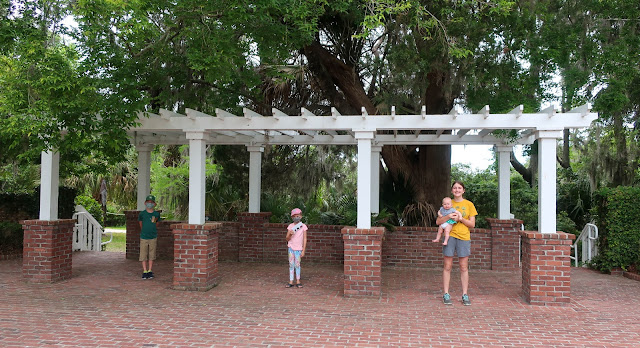 And then we walked around the grounds outside. The Coastal Discovery Museum is located on 68 acres of what was once the Honey Horn Plantation. The name Honey Horn actually supposedly comes from a Gullah mispronunciation of the last name Hanahan, as the plantation (read: forced labour camp) was owned by the Hanahans until 1854.

It was a bit of a yicky-drizzly day for us, but we enjoyed checking out the observatory decks on the marsh: 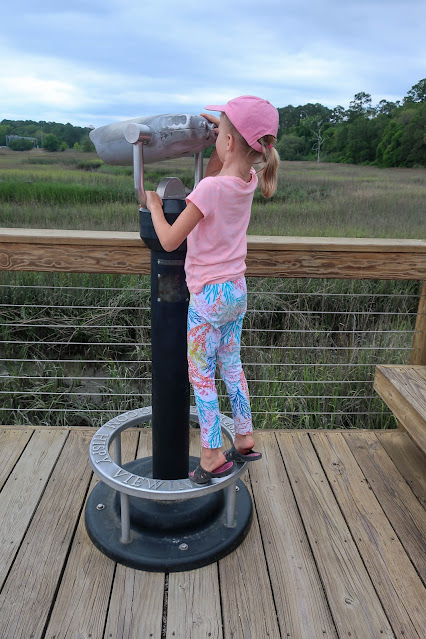 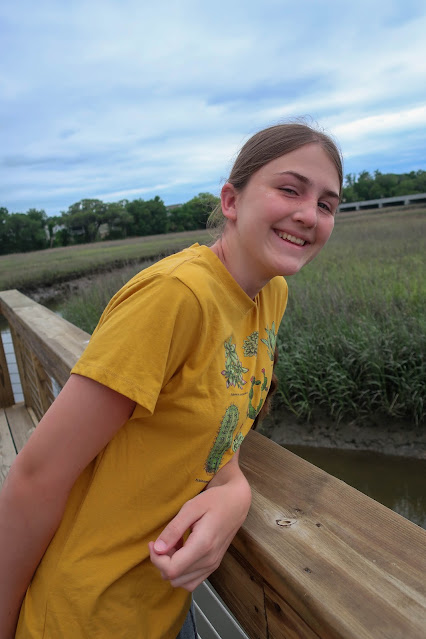 Here's Andrew being sure to read all the plaques: 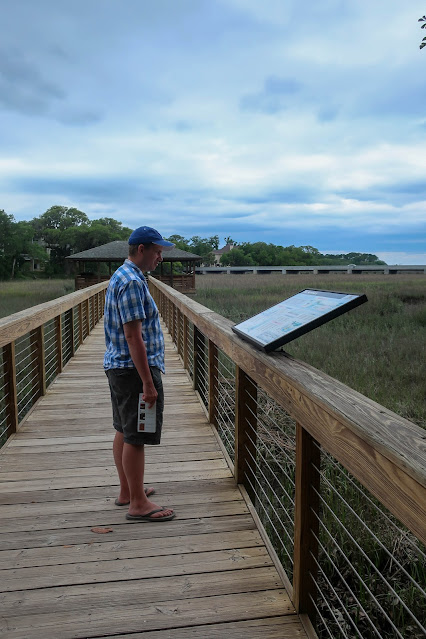 Here's Alexander jumping off the bench like a little lunatic while I sit nursing Phoebe: 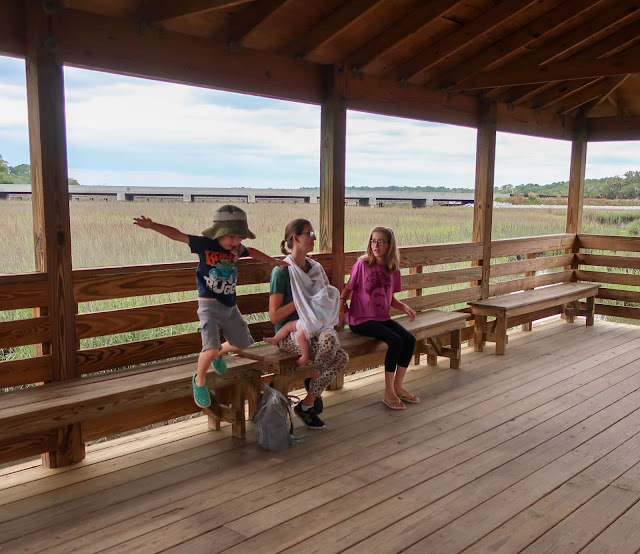 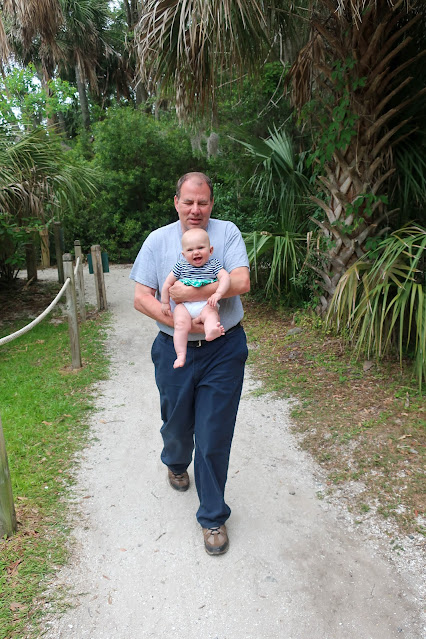 The butterfly house was also fun (the monarchs were quite active): 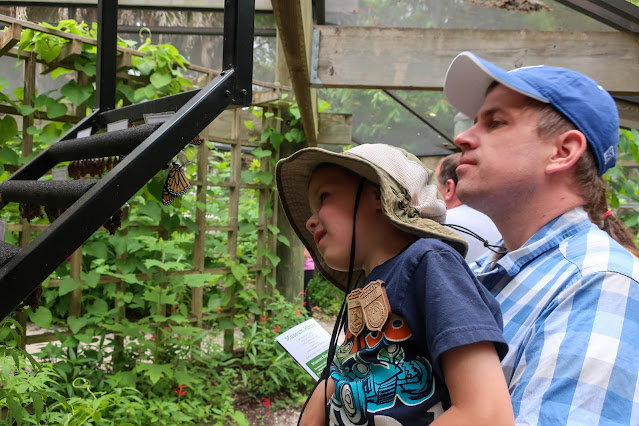 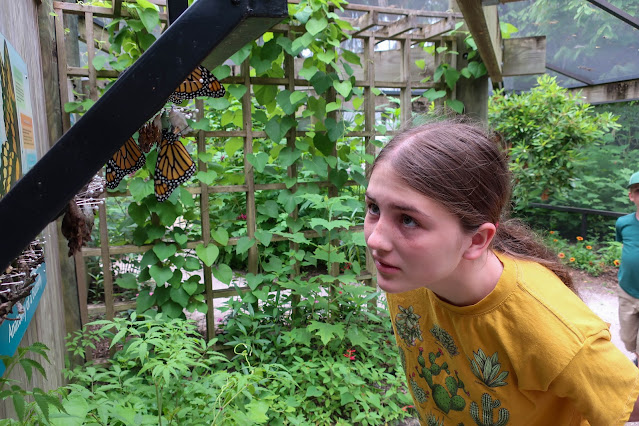 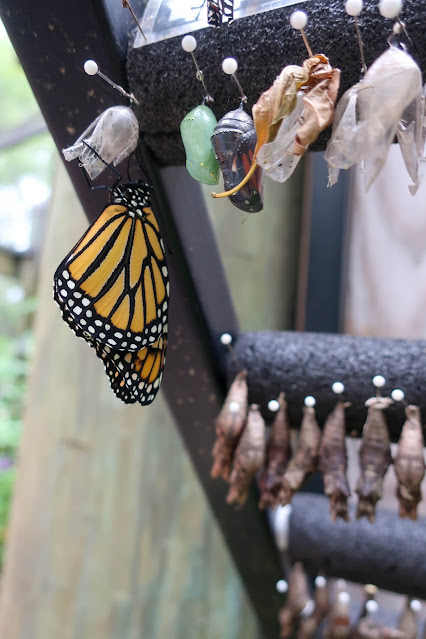 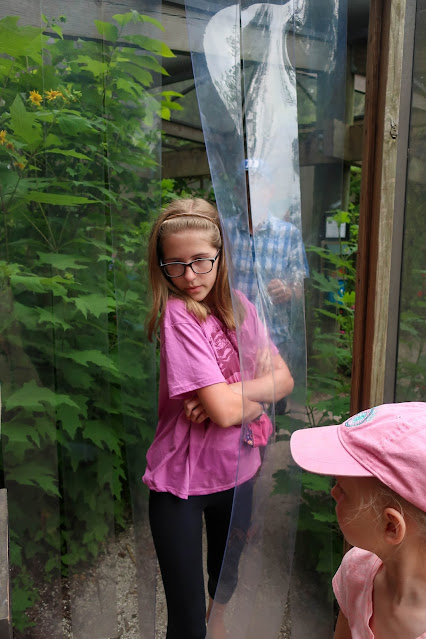 They have a "carnivorous plants" exhibit featuring Venus flytraps and pitcher plants: 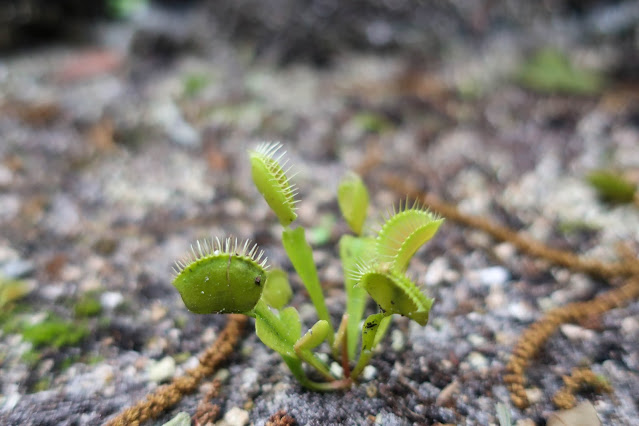 We saw a few anole lizards proudly puffing out their strawberry dewlaps: 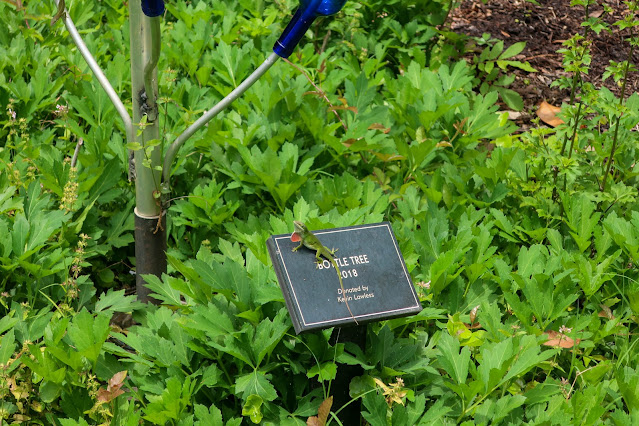 We found more monarchs outside the butterfly enclosure, just doing their thing in the wild(ish): 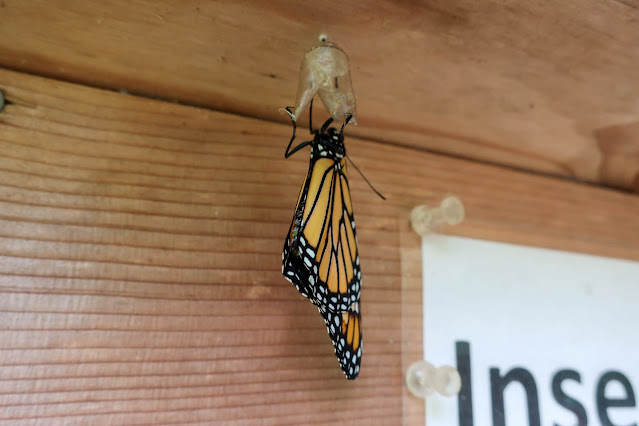 And the trees, of course, were lovely: 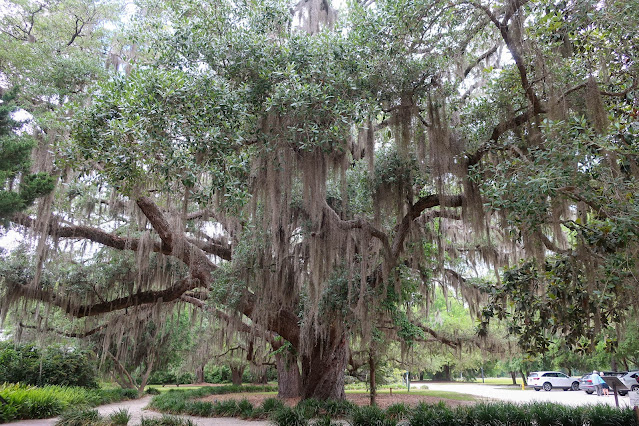 I imagine we'll be hitting up this museum again in the future: 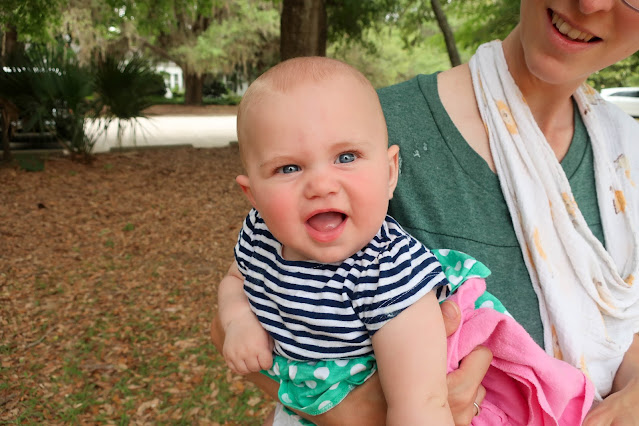 One thing about living in Georgia is that our large family is quite the aberration and paying entrance fees for all these kids adds up quite quickly. Now, I understand that having these kids was our choice, but I will just say that frequently in the west a family pass is valid for "two adults and all their dependent children" whereas in the east it often seems that a family pass is valid for "two adults and two children" or "two adults and four children" and just...it's very rare that a family pass is ever enough to cover our family.
And that's fine. It just makes things a little more expensive, which means we...do fewer things.
So we appreciate it when museums are able to open their doors for free!
As a side note, one of the prizes for this year's library summer reading challenge is an annual pass to the Georgia Aquarium. We've...uhhh...never been (because the entrance fee is nearly $40 and the family pass only covers a family of "two adults and two children") but we told the kids that if anyone in our family happens to win this grand prize we will buy a second family pass so we can make good use of the two family passes we would need to visit the aquarium at all.
Chances of winning are rather slim, but that's okay. It will still motivate them to read!
Posted by Nancy at 11:17 PM