Our last stop of the day was a quick progressive dinner in downtown Savannah. Honestly, Savannah is one of those places you could wander around in all day and not get bored. The architecture is charming; it's dotted with public squares and there's the riverwalk and all sorts of interesting things to see. But, we charged through following Andrew.

I said something about how "my dogs are woofing" because we ended up walking about 10 miles on that Monday and I carried Phoebe for most of it, either in the sling or the backpack, as shown here, with my hair pulled up under Andrew's baseball hat to keep Phoebe from yanking on it (she would not ride in the backpack while he was wearing it, but was happy to do so while I was wearing it). 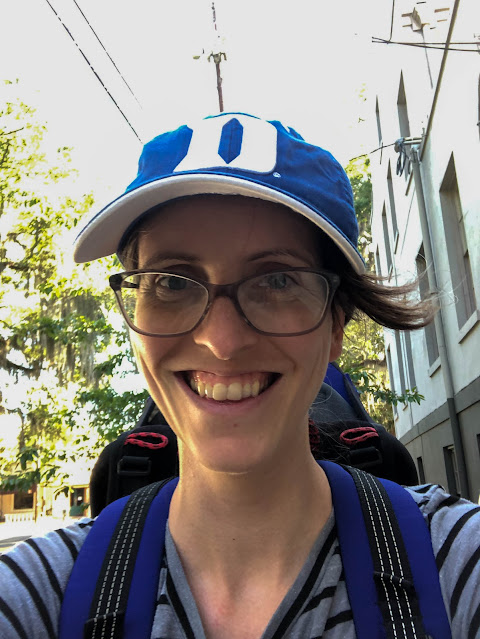 Andrew and Rachel both looked at me like I was crazy. We don't have any dogs. And there was no woofing.

They'd never heard of it.

"Maybe it's not woofing," I said. "Maybe it's barking. My dogs are really barking. That sounds right."

They also claim to have never heard that phrase. But I swear it's a thing. (It's a thing, guys.)

What might not be a thing is "chumbo wumbo gooey-gumbo," which I also said the other day. Google tells me there "aren't any great matches" for that phrase, but I also swear it's a thing.

Chumbawamba is a thing. Gumbo is a thing (and maybe it could be considered gooey). I don't know why the phrase "chumbo wumbo gooey-gumbo" lives in my head.

Here's Phoebe saying, "Fine! If you won't let me pull your hair, I'm going to try to eat my way out of this carrier!" 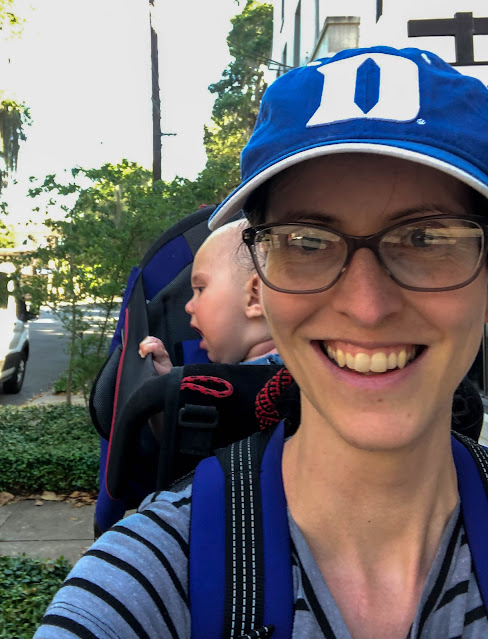 Rachel requested that we find some "historic buildings" to look at, which is nearly impossible to not do in Savannah (like, that would take some real talent). Here she is in front of the Mercer Williams House, where a famous 1981 murder took place. She rather enjoys murder mystery podcasts (something I rather...don't understand). 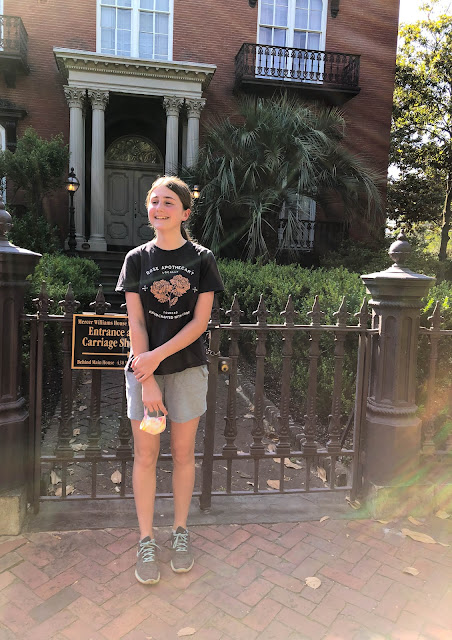 Here's Grandpa and Zoë walking down the street: 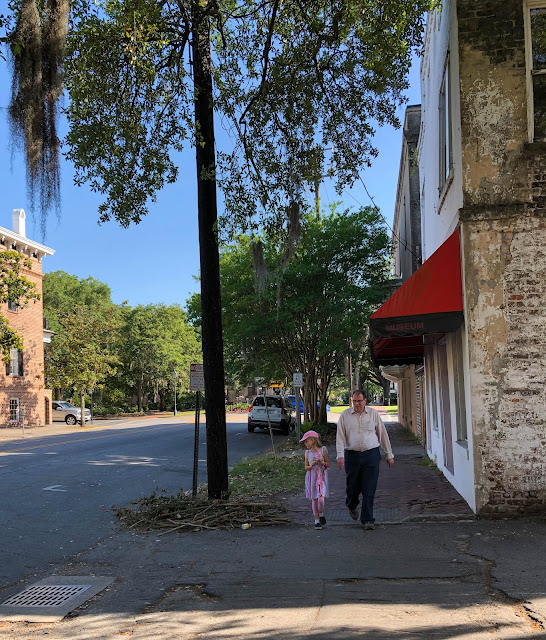 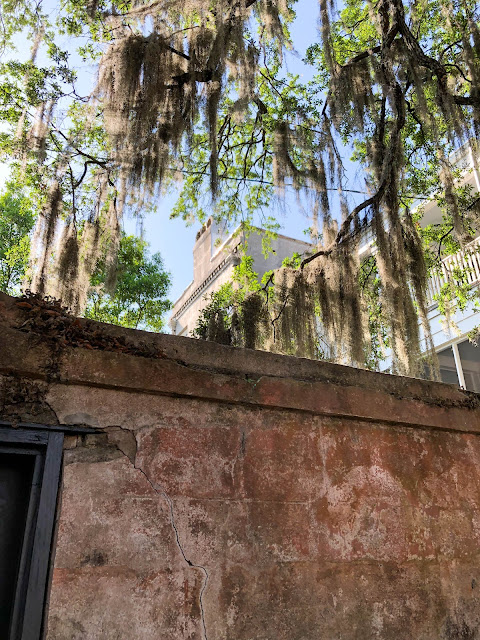 My sweet girlies resting by a fountain in one of the public squares: 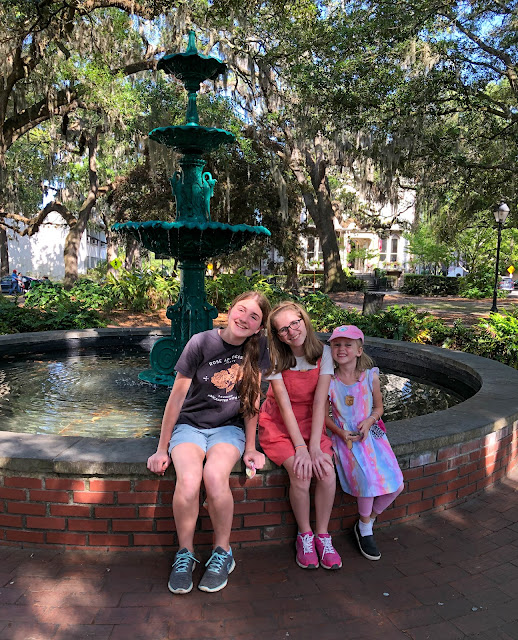 This picture of Zoë being so extra is everything: 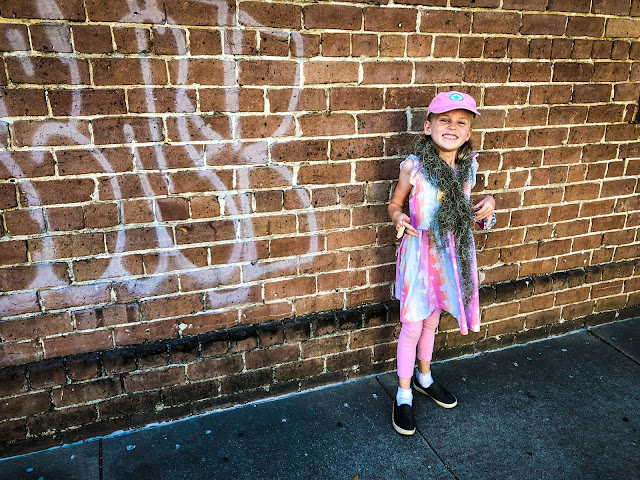 She found some Spanish moss and decided to wear it as a boa. Rachel is very fond of hearing something and declaring it a "good band name," but I think I can take this moment to declare that this would be Zoë's album cover art.

Here's some exciting chaos at an intersection we were trying to cross (a firetruck and two trolleys and...and...and...; it was very exciting for Alexander): 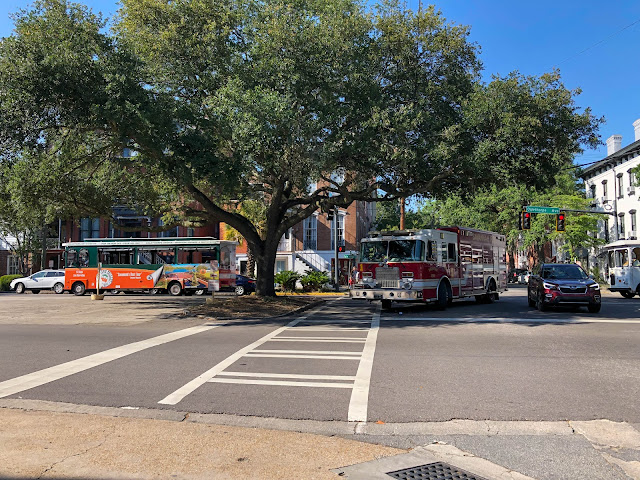 We stopped at Subway to eat. Originally we were planning on walking to the river to eat outdoors, but the restaurant was really quite empty so we decided it would be okay to sit down to eat. Alexander was riveted.

"So this is what a restaurant is like inside!" he gushed. "This is a nice place! I like restaurants!" 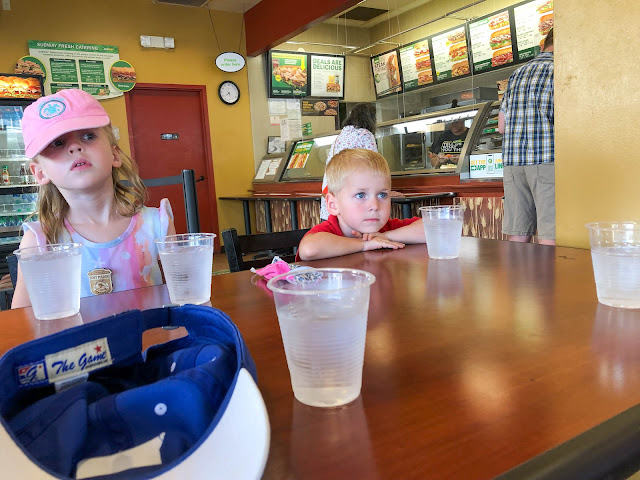 My poor pandemic baby. The kid has been nowhere.

After wolfing down our sandwiches and guzzling down our water (and, importantly, using the restroom), we were on our way again. This time we wanted to find Leopold's, which boasts the best ice cream in Savannah. Last year the line wrapped around the block, so we went to a little ice cream chain by the river, which was fine and good and still rather expensive. Leopold's though, makes their ice cream on site with fresh ingredients. And it was very good (but not worth waiting in line for hours for so I'm glad we hit it on a less-busy day).

Phoebe had her first licks of ice cream because Phoebe wants to eat everything: 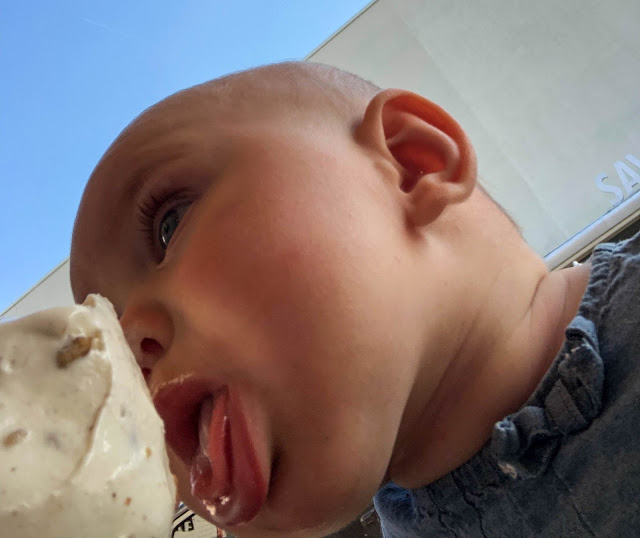 Here she is shouting, "Give me some more of that cold, wet stuff!" 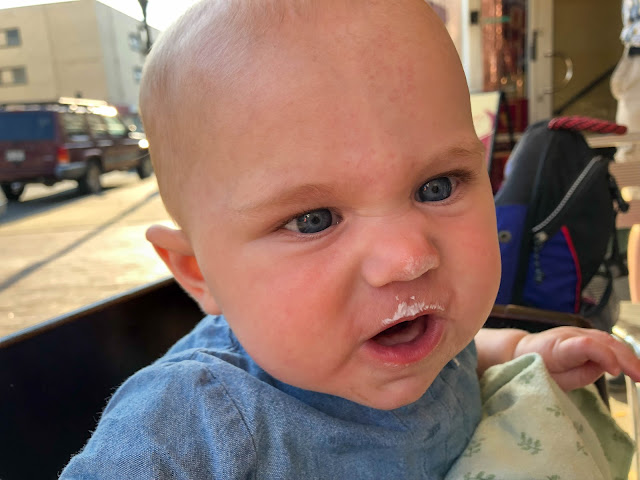 She was rather intense about demanding her fair share of ice cream licks: 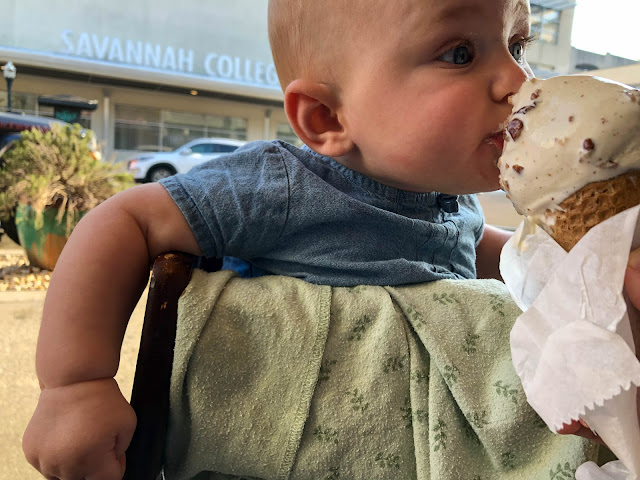 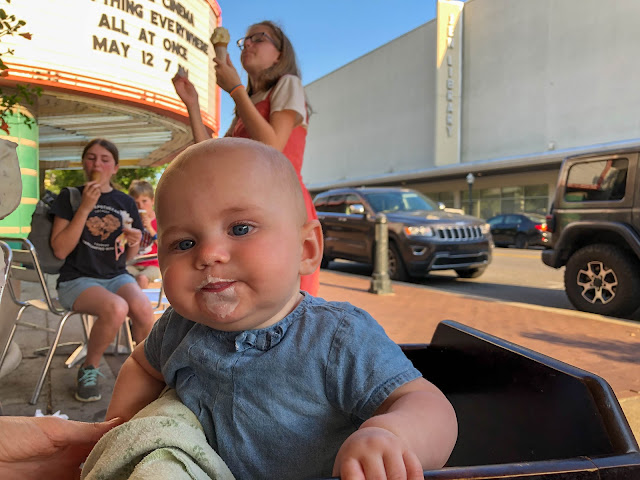 I know ice cream isn't great for babies; it's not great for grown ups either. So I figure a few little tastes won't hurt her. But it's a slippery slope because now she's also getting little bites of the peanut butter cookies Rachel made...along with a whole bunch of everything and everything.
It's hard to control the diet of a youngest-of-six child. 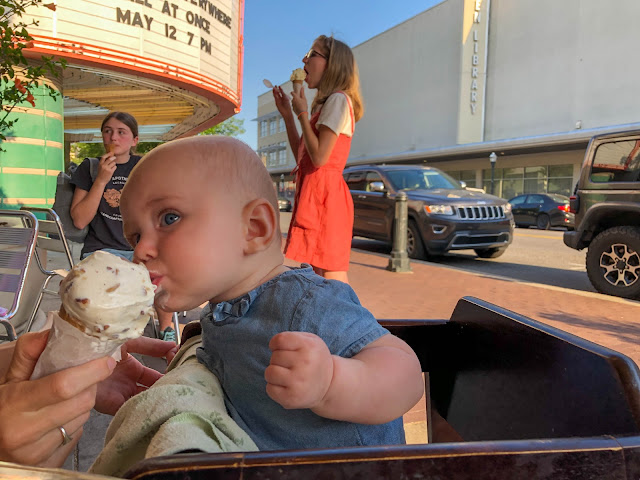 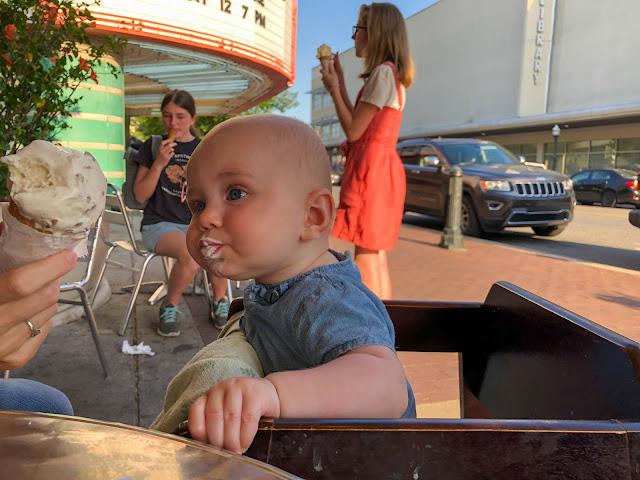 We walked all the way to the "waving girl" statue, which would round out our Savannah day quite nicely, given the fact that the waving girl was born on Cockspur Island, not far from Fort Pulaski (we also passed through Monterey Square, where Pulaski's remains may or may not be interred). 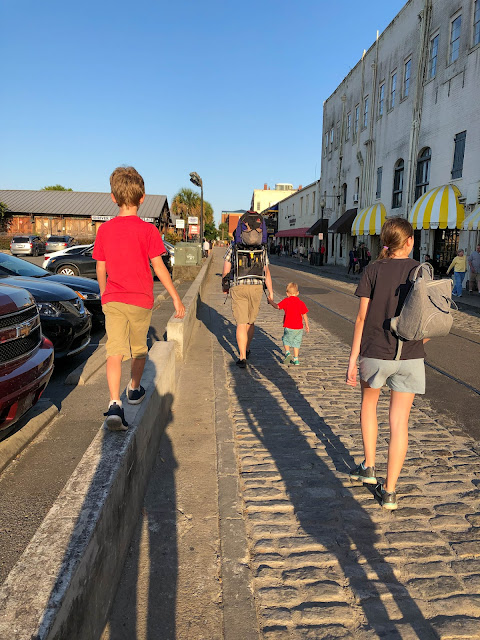 We didn't take any pictures with her, though, because there was another family doing that. Instead we sat, exhausted, on a bench. 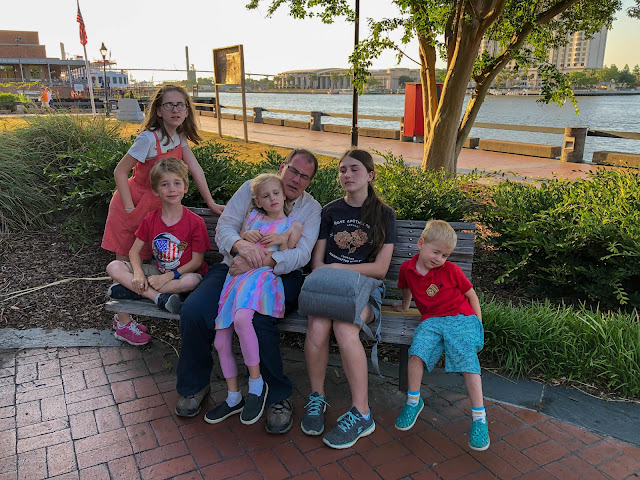 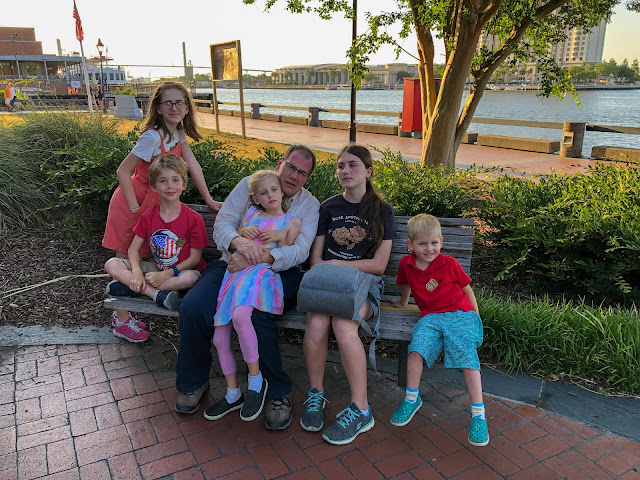 Oh, right, I mentioned that it was important that we used the restroom at Subway because Alexander had an emergency poop while we were doing the river walk. Andrew had to run off with him to beg an establishment to please let them use the restroom. It's a very touristy area so most places are pretty strict about not allowing non-patrons to use their restroom, but a waiter took pity on them and led them to the restroom. Alexander mostly made it, but still required a change of clothes (which is why he's in shorts now, rather than the blue jeans he was wearing before).
Before we'd all had a chance to even recover, we were off again, winding our way through the city to find where we'd parked. 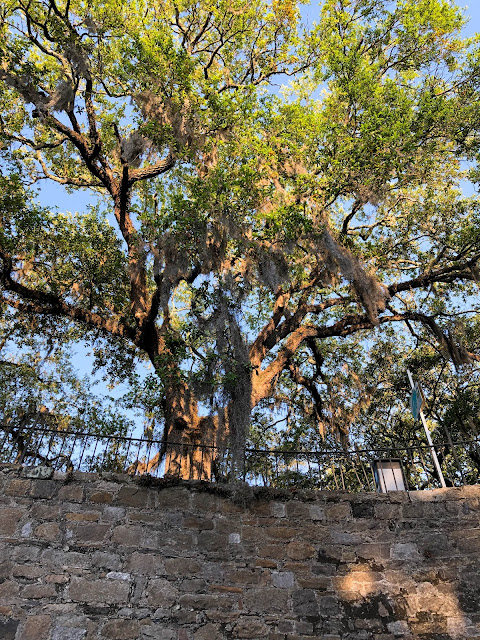 Here's a horrifying vertical panoramic I attempted at this historic staircase: 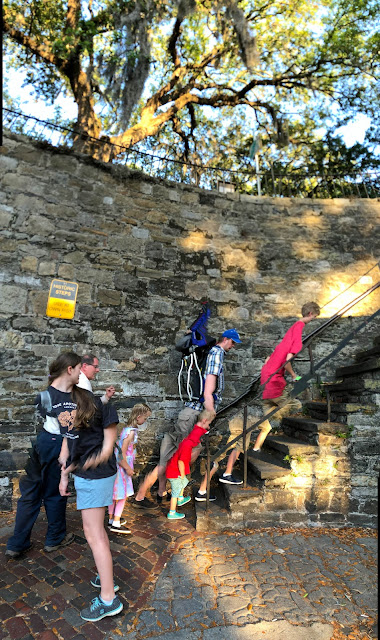 And here's a picture of our crew walking down the street: 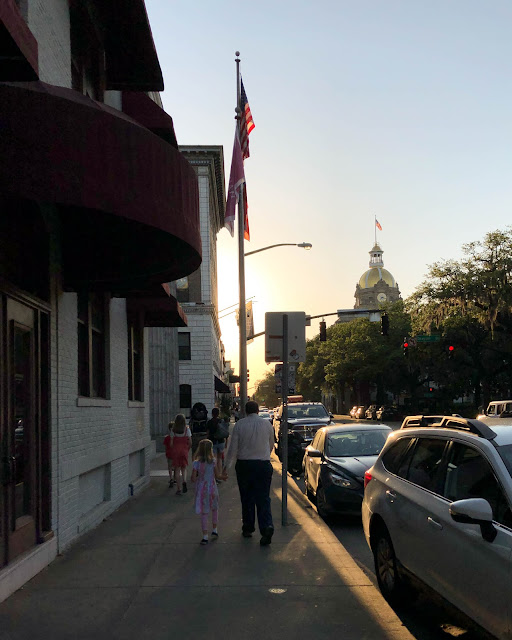 The ride back to Hilton Head was very loud in our car. Phoebe was not pleased to be stuck in her carseat again and screamed the whole way. It was terrible (thanks for asking).
Here's another picture of the sunset from the balcony. It was beautiful (to make up for the screaming, probably): 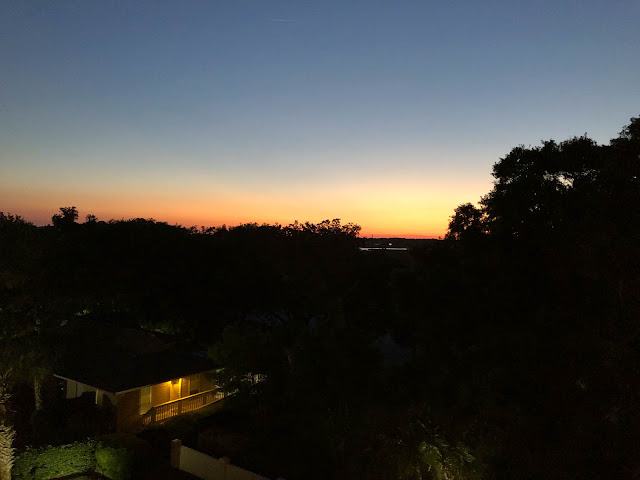