Saying goodbye to the beach (May 12)

Since we couldn't find beach access at Mitchelville, we headed back to Singleton Beach so we could bid the ocean farewell from there. We managed to catch the boardwalk shuttle both ways this time, which was nice because it was windy and rainy.
Here's a few family shots on the beach (we have a tradition of taking one of these each beach visit): 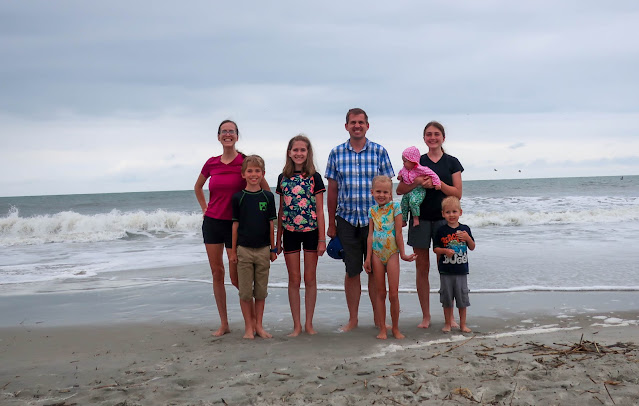 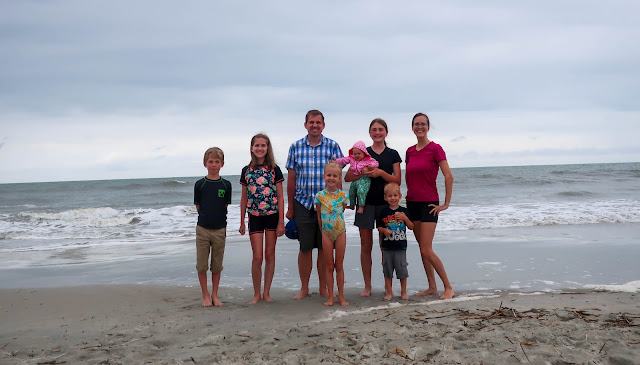 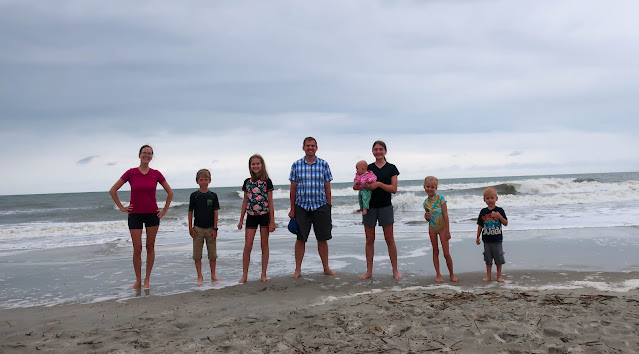 After a few "nice" pictures, the kids wanted to take a silly picture, so we did: 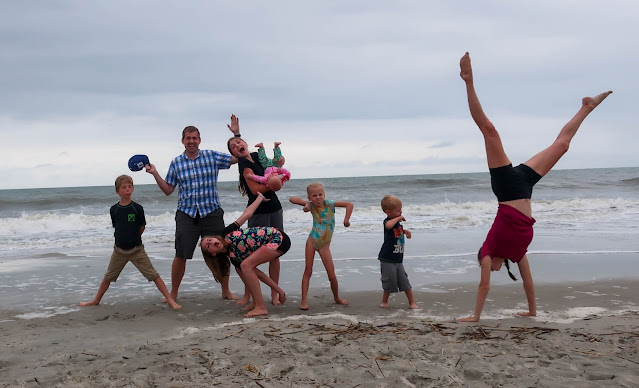 I was the one running to press the timer button on the camera, so I had a little trouble timing my pose with the shutter, but I think we all look adequately silly here.
We only brought one boogie board with us because Zoë had insisted that she needed to go boogie boarding one last time. No one else wanted to get in the water with her because—did I mention?—it was cold, windy, and rainy. 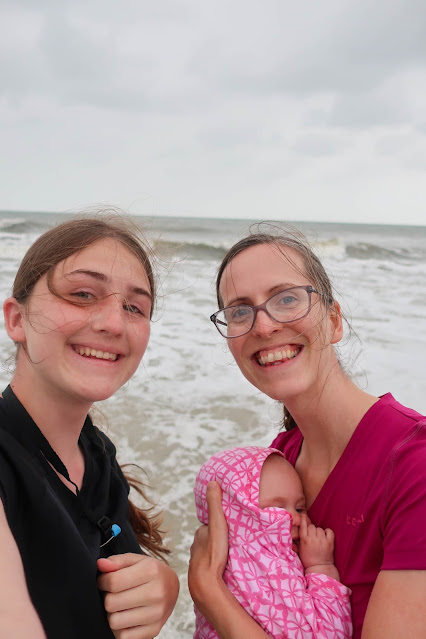 Here are the kids splashing in the surf: 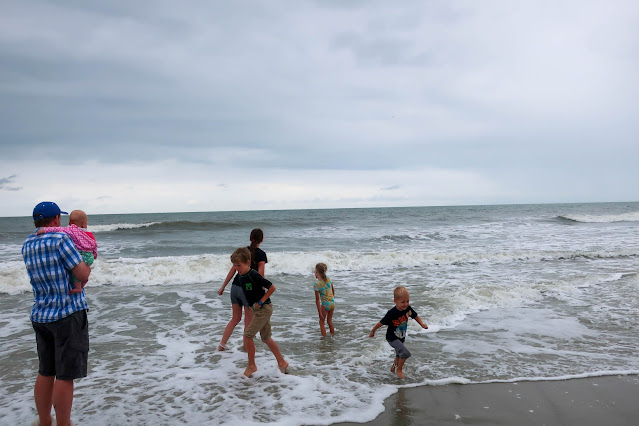 And here's Zoë getting ready to boogie board all on her own: 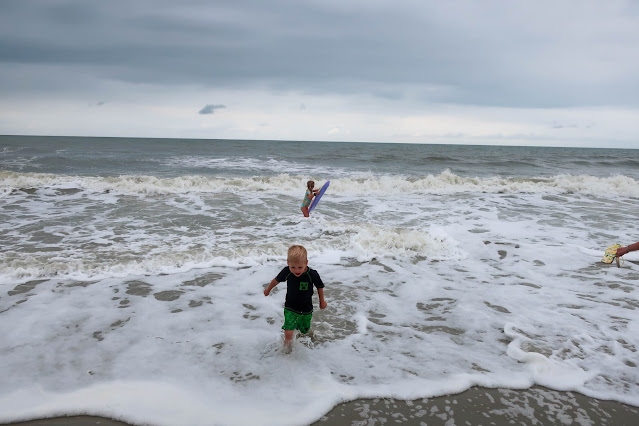 The only other people out there were some rather serious-looking surfers in bodysuits, so she wasn't entirely alone on the ocean. The waves were rather wild, but she had a great time riding them to shore: 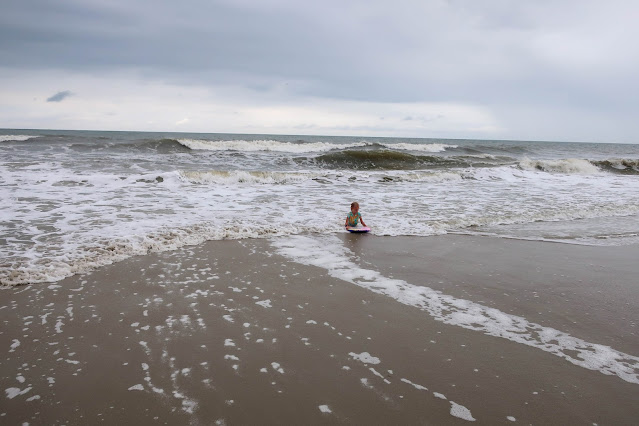 There was a lot of foam on the beach as well, which I find repulsive (since it's likely composed of decomposing organic matter—yum), but which the kids found interesting: 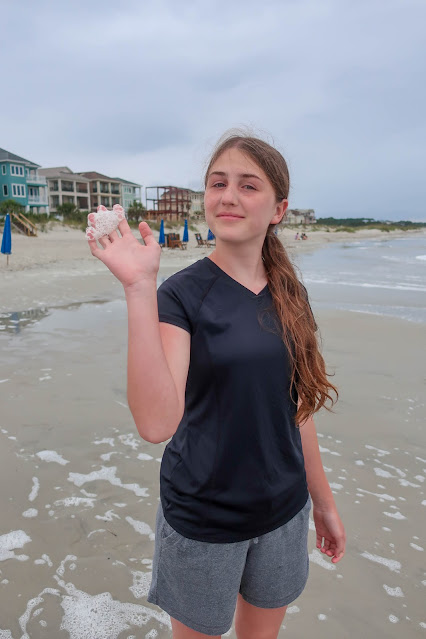 Interesting enough to smear it all over their faces and pretend they're Santa Claus in some cases: 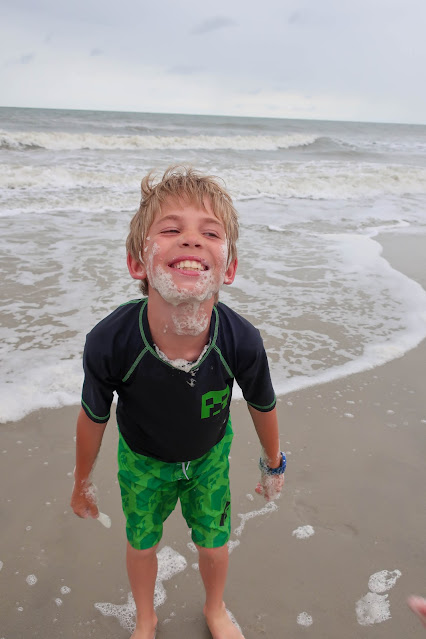 Here's a few more pictures of the kids (specifically Zoë) enjoying the surf: 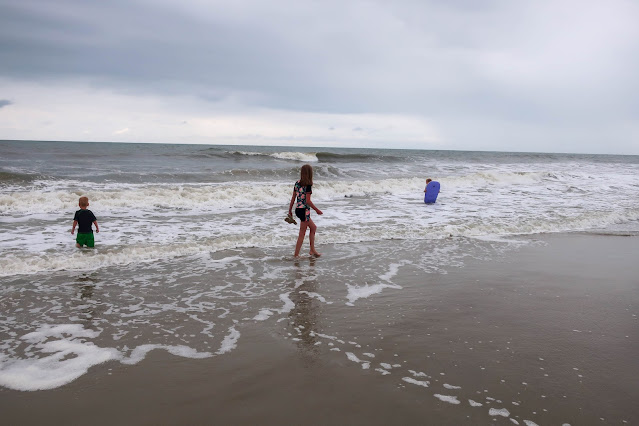 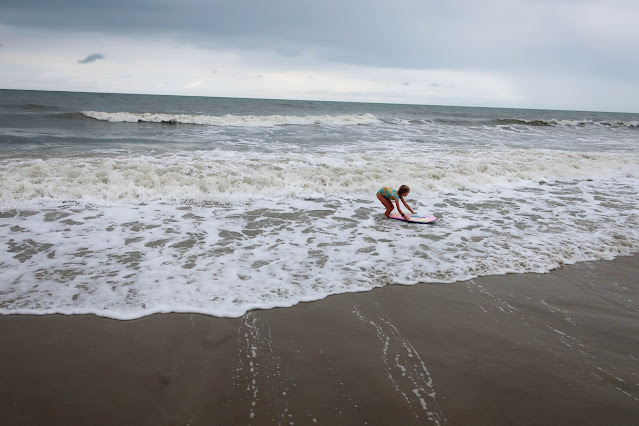 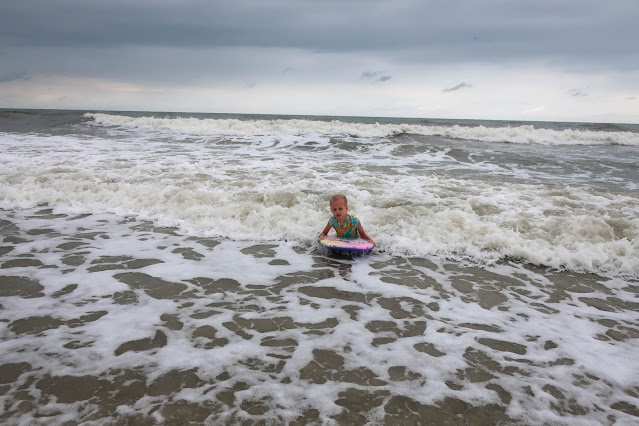 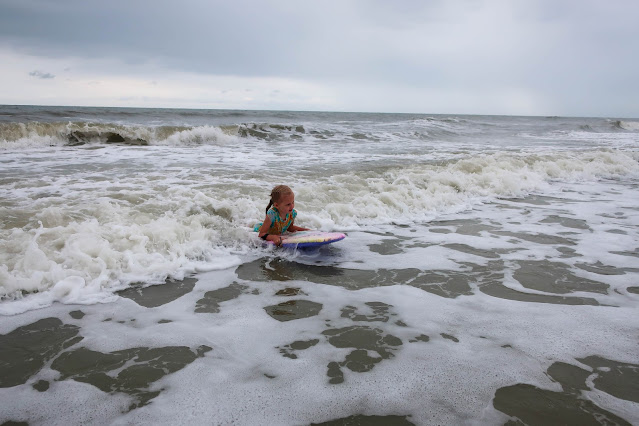 And here they are having found a hole some sandcastle-builders abandoned when they left the beach: 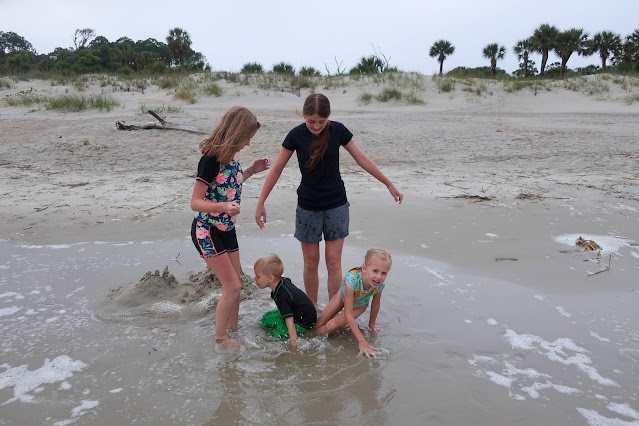 It had been loosely filled in with sand by the waves, but acted like a sinkhole when stepped in: 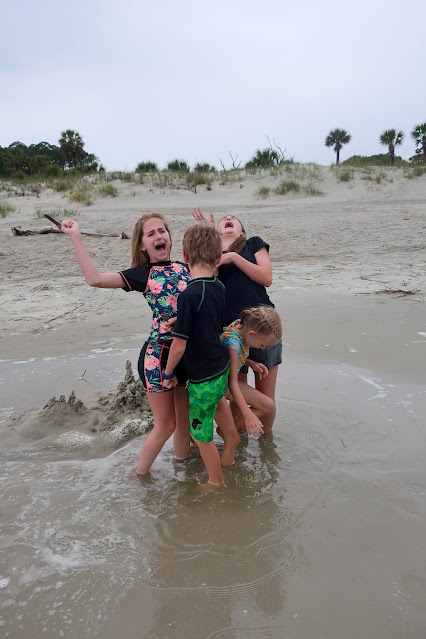 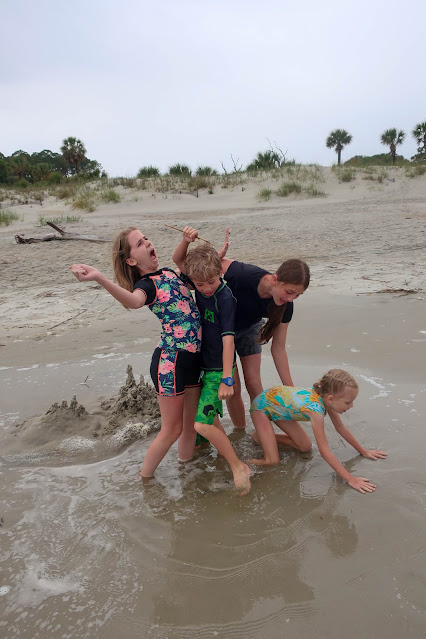 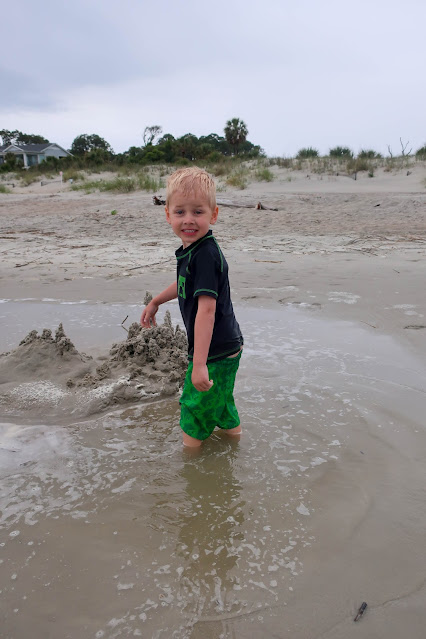 Here are two little kids (Zoë and Alexander, I think...unless that's Benjamin, but his little silhouette is closer to us, yet still shorter than Zoë, so I'm pretty sure it's Alexander—that's what I get for getting those boys matching swimsuits, I guess...nothing but confusion): 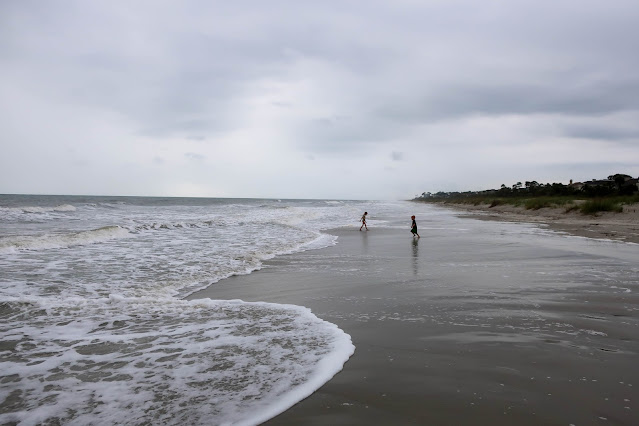 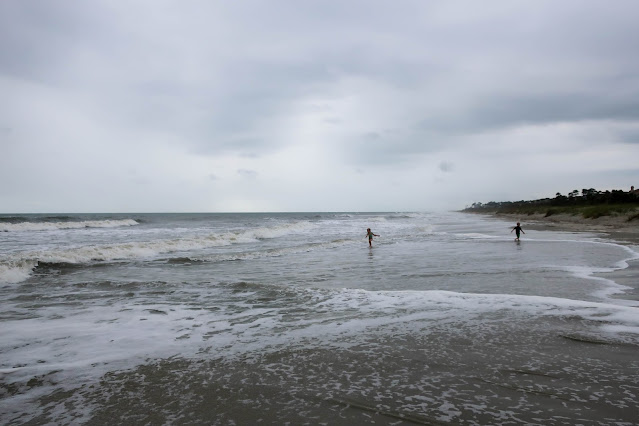 Here's our final look at the beautiful greys, blues, and tan of a storm-tossed sea: 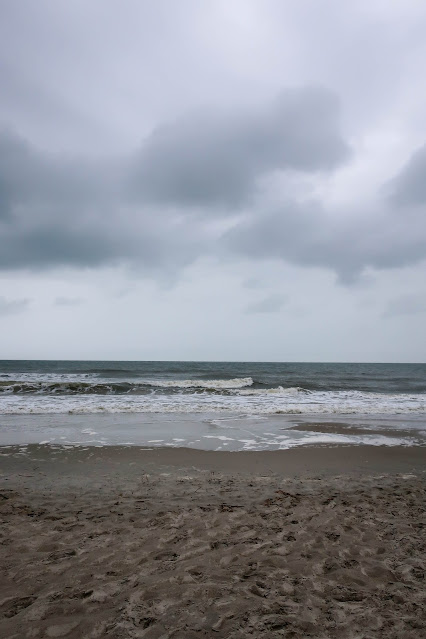 It's always hard for me to say goodbye to the ocean, but it's easier knowing that it's just a few hours away and we can always go back. It's not like we live in Nebraska or anything.
Posted by Nancy at 11:46 PM