"I found my invitation to Zoë's birthday party," our little neighbour told me when I stepped out on to the porch to look a worm Alexander had found. It had been uprooted and drawn to the surface by the drizzly—at times downright downpour-ish—weather.

It was a quizzical-looking thing, with a distinctive hammerhead. Knowing it's invasive, I went back inside to get some salt. While I was gone, Alexander and the neighbour chopped the worm in half, which is cool because they reproduce via asexual fragmentation so now we essentially had two hammerhead worms on our hands. No matter. I scooped it into a plastic baggie and added some salt. Poor dear(s).

"I found my invitation to Zoë's birthday party," our little neighbour repeated, waving a rather soggy, rather empty piece of paper in my face.

"You must be mistaken," I told her. "I haven't planned a party for Zoë this year."

We'd considered baking cupcakes and setting up a table in the cul-de-sac for neighbours to stop by and grab and somehow convince Zoë that that is a party. But...it was raining...so we didn't.

"Oh, I love her immensely. I just didn't plan a birthday party for her."

Our neighbour, an only child, considered the mathematics of this.

"But I have this invitation..." she insisted.

"That's not an invitation," I told her. "That is a piece of scrap paper that I used to cover a cup to transport a big cockroach outside last night."

"That cockroach right there?" she pointed.

"It doesn't have a head," she observed.

"I...accidentally...decapitated it when I caught it," I explained.

And it writhed around wildly in the cup...in my hand...while it looked for its head, like a cartoon skeleton, zombie, or snowman. It didn't know its head was on the outside of the cup while the rest of it was stuck on the inside. Its head seemed confused as well—antennae twitching as if feeling around for its body.

When I lifted the cup to free the head, it seemed to slurp back to the abdomen. It was still connected by some sort of stretchy ligament. The bug relaxed some, its body knowing its head was nearby.

The head dies first. It can't be reattached.

But the body will seal off the wound and keep living off its last meal for who knows how long. And who knows for why. What is the point of living when you no longer have a brain? (Asexual reproduction may be just the thing to live for, in fact.)

Cockroaches can learn things. I don't know what sorts of things you teach a cockroach, but apparently they can learn things. Except they can't learn much when their head has been chopped off. But they certainly keep kicking for a while.

"It's still alive," our young neighbour informed me.

"Alexander told me this was my invitation."

"Alexander was mistaken. That is a piece of scrap paper. It says nothing about a birthday party. There is no birthday party to attend."

Zoë desperately wanted a birthday party as well—ideally a pool party. I threw one of those for Benjamin's 5th birthday. It worked out well.

I remember once looking ahead at all the birthdays I'd have to plan, and although I've been laughing at that memory, I went ahead and worked out the rest of our birthday party schedule (if we continue to follow the 5, 8 12, 16 rule, which honestly seems about impossible at this point):

First of all, I'd say it's an absolute miracle I managed to space my kids so that I'd only ever have to throw two birthday parties a year, max. Next, I'd like to say that looking at that 2038 looming in the future is making me feel real old and tired. Finally—and the real point in sharing this chart—is to note that I haven't thrown a birthday party since 2018.

You'll note that's a "no party" year, but I actually threw Miriam's birthday party in January of that year because I had a baby just before her birthday and my postpartum period was hard.

That was the last party I threw.

Rachel decided not to have her 12th birthday party in Utah with her friends (since she'd just gone to girls' camp with them). But she didn't want to have her birthday party in Georgia (since we'd just moved and she didn't have any friends). So she decided to postpone her party for a year to give herself a chance to make some friends, which was fine with me, except that that would make 2020 a three party year and that sounds like a lot of parties.

So now Rachel, Miriam, Benjamin, and Zoë all have a "raincheck" birthday party that some are feeling more anxious than others about cashing in. Alexander will likely join their ranks in October.

Somehow or other we need to work in some wiggle room to allow for having babies (done with that), moving, global pandemics, etc.

All that is to say, it was Zoë's birthday yesterday. She turned seven. She didn't get a party. And we gave her clothes for her birthday.

Here she is, so excited to open presents, which she pointed out she could do in the middle of the day, rather than the evening, since everyone was at home—a perk of our pandemic lifestyle, which has Daddy working from home more often than from campus. 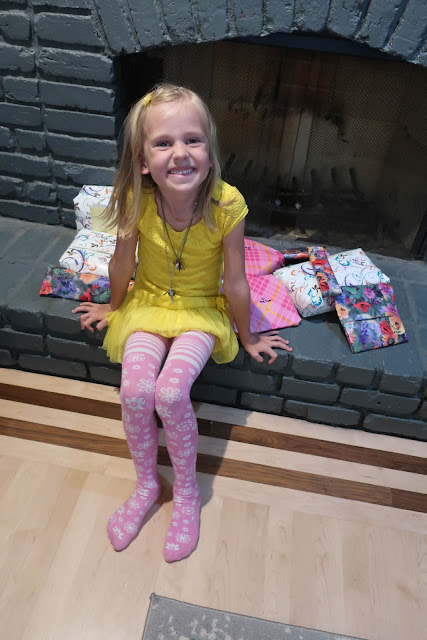 Here she is opening her first present, choking back tears and disappointment, and saying, "These. Are. Cl-cl-clothes." 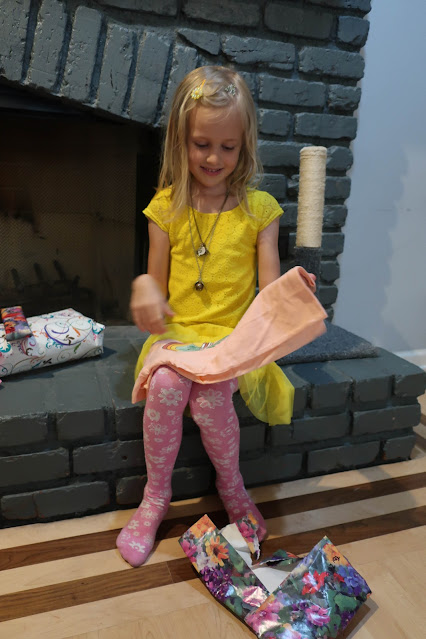 The next present she chose to open was from Auntie K. Smart kid. She knew that present would be a fun one to open. And it was everything she wanted—a unicorn watch! 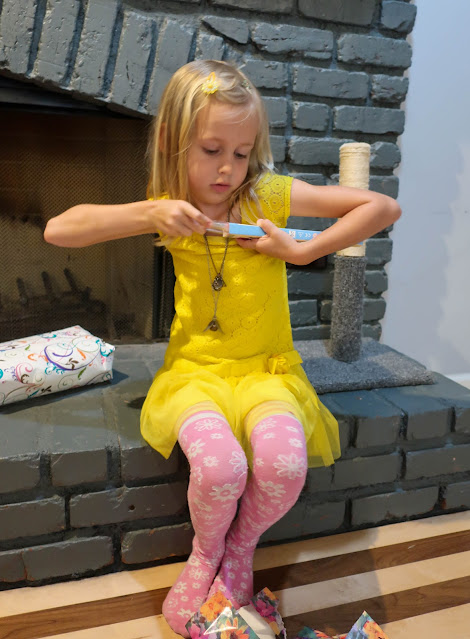 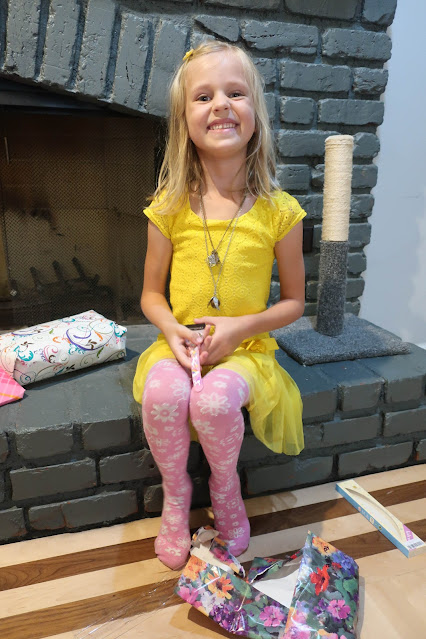 Now we never have to wonder what time it is because Zoë has been happily announcing the time every few minutes. Benjamin made sure to point out how much he's matured since he got his watch because he only announces the time every hour or so now. 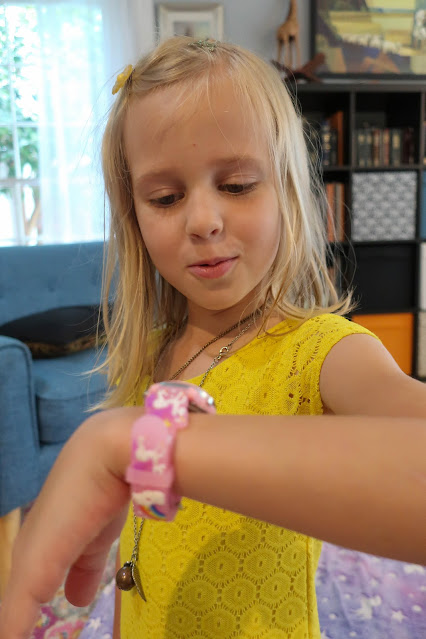 In the background here you can see the glow-in-the-dark unicorn blanket my mom sent. Zoë was excited about that, too! 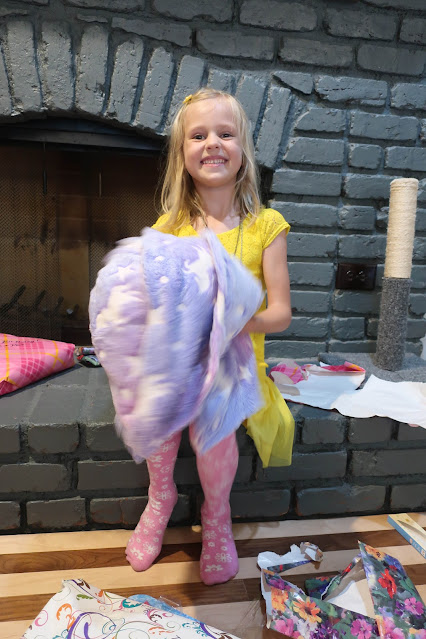 We got her a new set of pyjamas that are purple and have pink unicorns on them. We didn't even plan it, but they match the blanket quite well!

Here's Zoë holding them out, like, "Stupid clothes," though we also got her some fun pool toys so I don't know why she's so disappointed in us: 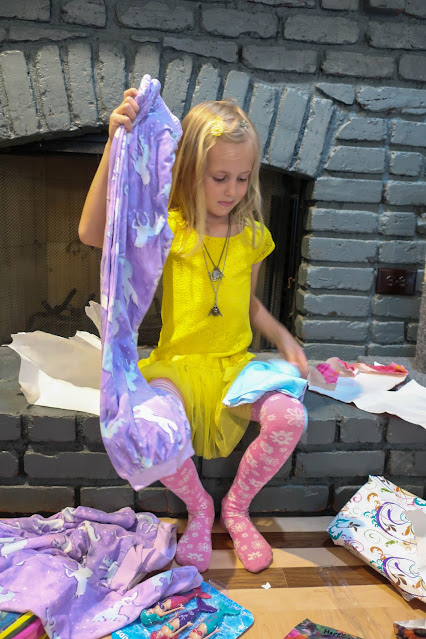 Miriam sewed a couple of Barbie outfits, which Zoë is holding here, and then she spent the afternoon patiently playing a very complicated Barbie game with Zoë, following all of Zoë's directions: 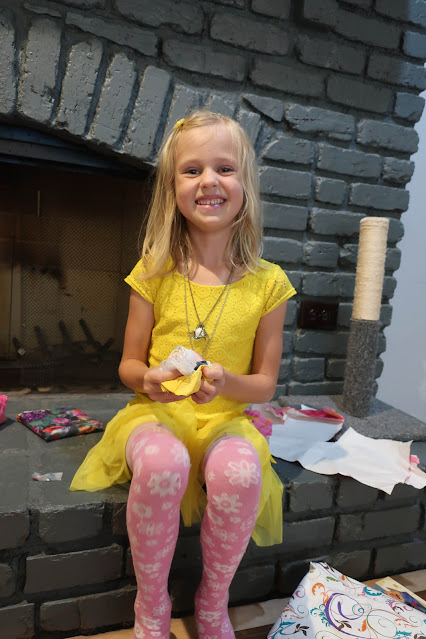 Here's a cute picture of Benjamin watching her open her gifts: 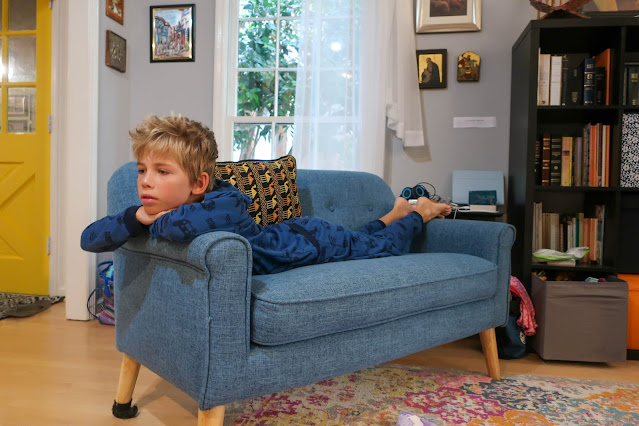 And here's cute Phoebe and Daddy: 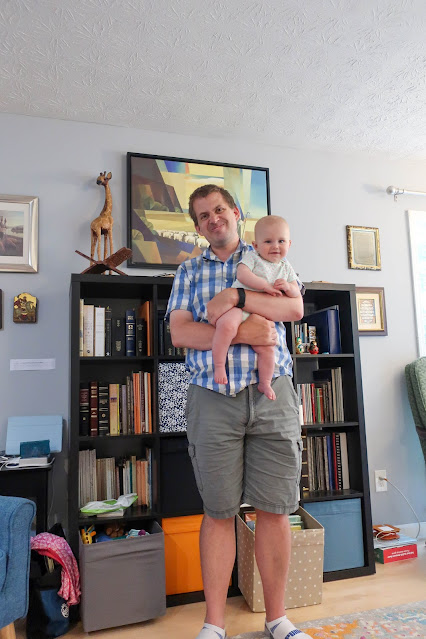