On Friday we went to the Idaho Falls Museum, which was surprisingly amazing. The main attraction was BODIES: The Exhibition, which was obviously quite amazing, but their regular displays were put together very well, as well. I was very impressed.

I was a little torn over BODIES; some parts were fascinating. The display of the circulatory system, specifically, was awesome. To see every single blood vessel in a body, perfectly preserved left me virtually speechless. I knew our bodies were complex, but that just blew my mind. And then I read about how they injected the blood stream of a cadaver with a silicone mixture and then dissolve the rest of the body, bones and all, and I was a little bit mortified. Still, it was very interesting to see how complex we really are.


Rachel and I had a long talk in the respiratory system display. They had two set of lungs displayed next to each other, one of a smoker and one of a non-smoker. Rachel had a lot of questions about why they were different colours and so forth. We decided that we just wouldn't smoke so that our lungs could stay nice and clean. There was a box in between the lungs that looked almost like a donation box but was actually a receptacle for cigarette packages—the sign above said something like, "Stop smoking today; leave your cigarettes with us," and people had actually dropped boxes of cigarettes inside.

Seeing the display of the digestive system was interesting. If you had ever heard that your small intestine can wrap around the world, I can personally testify to you that it cannot—I saw the whole digestive system pinned to a wall that was smaller than the circumference of the world.

I had a bit of an issue seeing dead and partially dissolved bodies displayed in various poses. Corpses don't play basketball, I'm sorry. Maybe this is okay for you, but this was borderline "not respectful" for me...so if I ever donate my body to science, please tell them to only display my circulatory system. Anything more than that is a little bit much for me.

I've seen dissectible dummies that show cross-sections of the body or that allow you to pull out various body parts as you go and that was real enough for me. Seeing actual bodies cut in a half was a whole new game for me. Although it was interesting to see where all the organs actually go (they sometimes even had them labeled, which was nice) and marveling that I ever had room for another person inside of me (trust me, your innards are already squished enough without adding a child to the mix) I couldn't help but think, "This was once a living, breathing person—like me—and now they are cut in half and on display for all the world to see."

I also am empathetic toward ancient mummies, in case you needed to know. When we went to the mummy room in the Egyptian Museum I may or may not have apologized to the royalty entombed in plexiglass cases. I'm sure they didn't expect to be on parade for thousands of years after they died.

The fetal display was also difficult to visit—they even had a "viewer discretion advised" sign posted outside the room and another sign in the room with a disclaimer that all fetuses had perished in the womb due to natural or catastrophic causes. It was interesting, of course, to see actual embryos in their various stages of development. A 10-week fetus doesn't look like a baby but a 12-week fetus already does. They had an 18-week fetus on display as well and it looked like a perfect little—very little—baby.

I've had several friends and families members lose babies late in pregnancy and that's how they all described their little angels. I almost cried for a dear friend who lost a baby, at seventeen weeks, just a few weeks ago, because that baby, resting peacefully on display, was perfect.

In summary, the exhibit was highly educational and interesting but some of the displays were too risque for me. While I understand that the creators did their best to maintain the sanctity of life and uphold reverence for the bodies they were working with I, personally, had a hard time with some of the displays. But that's just me.

The museum had a great discovery room for kids, complete with tunnels, a beaver dam, a pioneer house,  and a teepee. My girls were in heaven. Miriam immediately moved into the pioneer house to tend the babies while Rachel ran around trying everything out. 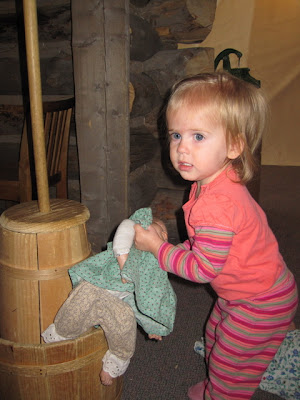 She made animal tracks, hiked up a mountain to look inside and eagle's nest, swam under a river, and entered a bear's cave all within five minutes. 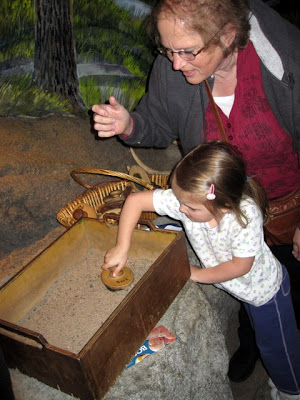 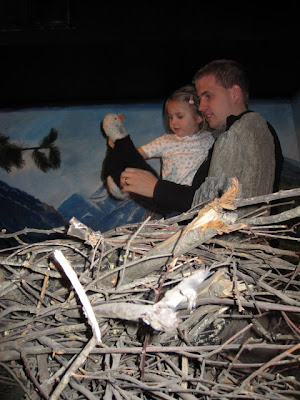 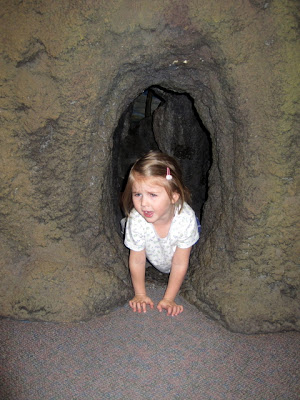 There was also a little barrel horse that the girls went for a ride on. 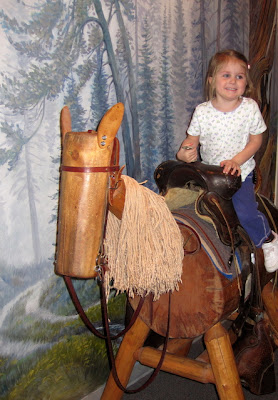 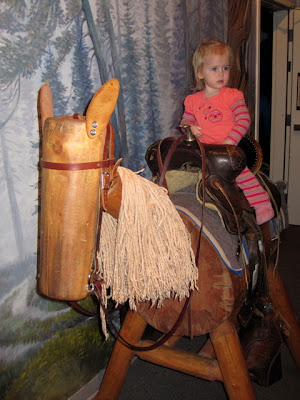 The natural history room was interesting with Miriam. She is going through this phase where animals bite her fingers. If she sees an animal in a book that has sharp teeth or looks like it might have sharp teeth, she'll slowly extend her index finger, touch the offending animal, pull her hand back with a jerk, and then starts to fake cry.
"Ow, ow, ow, ow, ow! Bite!"
Then she'll make you kiss her finger better and does it all over again.
Apparently stuffed animals in museums do the same thing. Those pesky mountain goats almost nibbled her finger right off!
She's actually a pretty convincing fake-cryer and we had to move on before people began to think she was crazy.
The next exhibit was the "town history," I guess. It was all about the history of Idaho Falls, so that's probably a pretty good guess. We rushed through this display, too, because by this time Miriam had wet her diaper so much that she was soaked in pee and was currently soaking her daddy. I am so bad at remembering to change disposable diapers! Her cute, little bum looks so petite in them, but, honestly, I cannot, for the life of me, ever remember to change them. 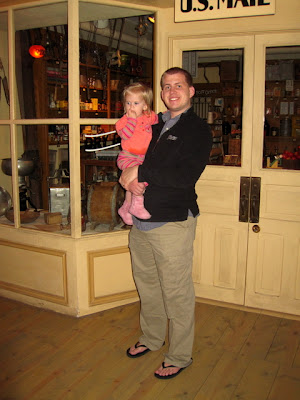 We had to take a picture of Grandma under the general store display because of the name of the store. 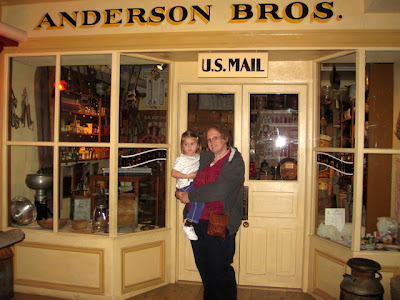 After changing Miriam's diaper and lunch and chilling at Emily and Morgan's house and swimming and dinner (in that order and about that fast, too), our little family abandoned Grandma at the hotel and headed back into Idaho Falls to meet up with our refugee friends from Cairo and Bahrain. It was so nice to see them, but a little surreal considering that we met at a dairy farm instead of the pyramids, but whatever works, right? 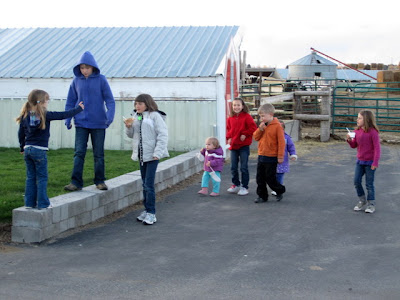 We had eight little girls (or little-ish girls; I'm sure Rebekah doesn't appreciate being thrown in with the littles) and one little boy (Josh was at baseball so he didn't come (spoil sport); he probably also wouldn't appreciate being lumped in with the littles, either). That's ten kids between our three families. It was a regular family reunion, only with friends instead of family. They feel like family, though.
Rachel asked, "Mom, are these my cousins or my friends?"
"They're your friends," I told her, "Why?"
"Because I like them so much I wish they were my cousins!"
They're like our...Egyptian cousins, except now we "reside" in three different countries and only revolutions and upheaval can bring us together on the same continent.
We had ice cream at Reed's Dairy and let the kids visit the cows and ponies and such. 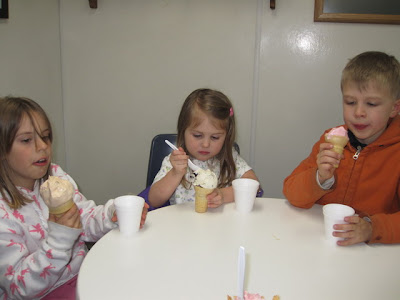 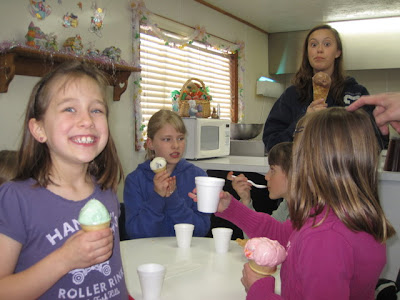 It was so great to get together with Lydia and Amiee and let our kids run around like hoodlums! It reminded me of a ward party in the backyard of the church villa, only instead of smelling like smog it smelled of cows. 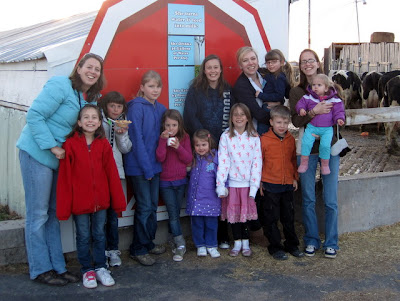