The kids are outside playing in a fort they made on the deck. I am inside doing my best to pretend they don't exist for a minute. Let's just say that we've had a rough morning.

I don't know what I was expecting.

Andrew's home now so, that's nice. I didn't even get up with Rachel this morning. But the other two have just been at each other's throats all morning. There has been so much screaming that I can hardly stand it.

Andrew's home and while that's nice, sometimes his trips are timed rather poorly. He left Thursday morning last week, which is fine, except that Thursdays are basically my favourite day of the week because Thursday's docket is usually quite empty for Andrew. He has no where to be, which means that sometimes he'll actually be at home.

Wednesdays are a late night, Tuesdays are late every other week, Mondays are hectic with Andrew walking in the door ten minutes before Rachel has to leave for soccer practice. And so it's really Thursday that I look forward to. Weekends aren't half bad, either.

But this week Andrew was gone Thursday through the weekend. He got home just in time for his crazy school days which means that I won't see him until Wednesday when he comes home from picking up his mom from the airport (his evening class on Wednesday was cancelled this week).

Anyway, I'm just feeling worn down from running full-steam ahead for a week, I think.

All whining aside, I'm going to talk about frogs now instead of my children because right now these frogs are far less annoying. Far. Less. Annoying. Because in the time it took me to write that the kid have decided to come inside and are now drumming on the washer and dryer, which incidentally is far less annoying than all the screaming they were doing previously.

The tadpoles had begun hanging around the top of the water lately, which means that they're running out of usable oxygen and it's time for a water change so after hanging out a load of laundry to dry we took the frogs outside for some fresh water. 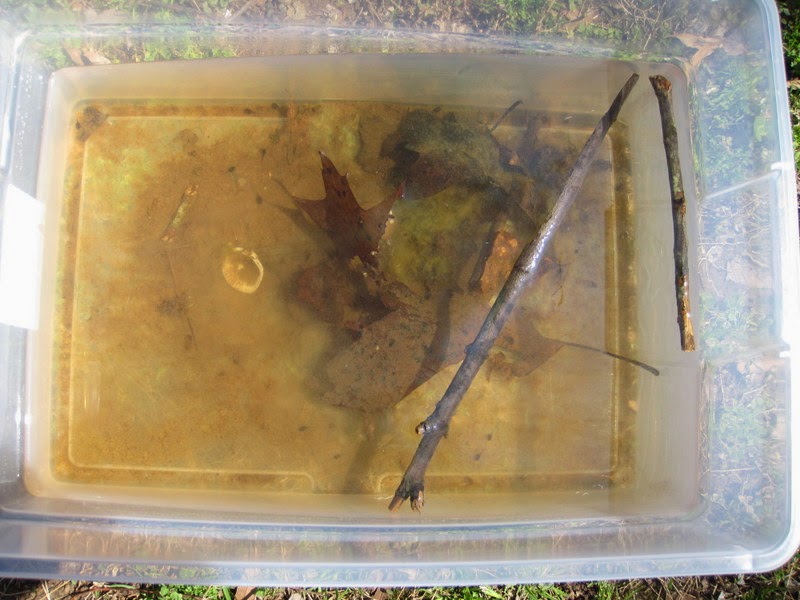 I would like to move their little pond outside full time but unfortunately I have no idea where I'd keep it. Benjamin has this fascination with throwing stuff into their container. I set the container on the ground and he came running over with fistfuls of whatever he could grab, fully intending to chuck it in their water.

I stopped him and explained that we were emptying the water so that we could put fresh water in.

Miriam and I scooped out about 50% of the water and then I turned the hose (of our rain barrel) on and let Miriam hold it over the tank. Benjamin, that pesky boy, ran up with a cup of muck and threw it into the water before I could stop him, splashing everyone with icky water.

Now the tank is all cloudy and gross. I'm waiting to see if the water will settle before changing it again.

And that's basically why I can't leave the tank outside. I just don't know where I'd put it to keep it safe. Benjamin would tun it into a mudpie before you could say, "Argh!"

Anyway, our tadpoles are growing well. They're now just over 1 cm long, on average, though they're much tubbier than they used to be.

Here's a picture of a tadpole on Day 7: 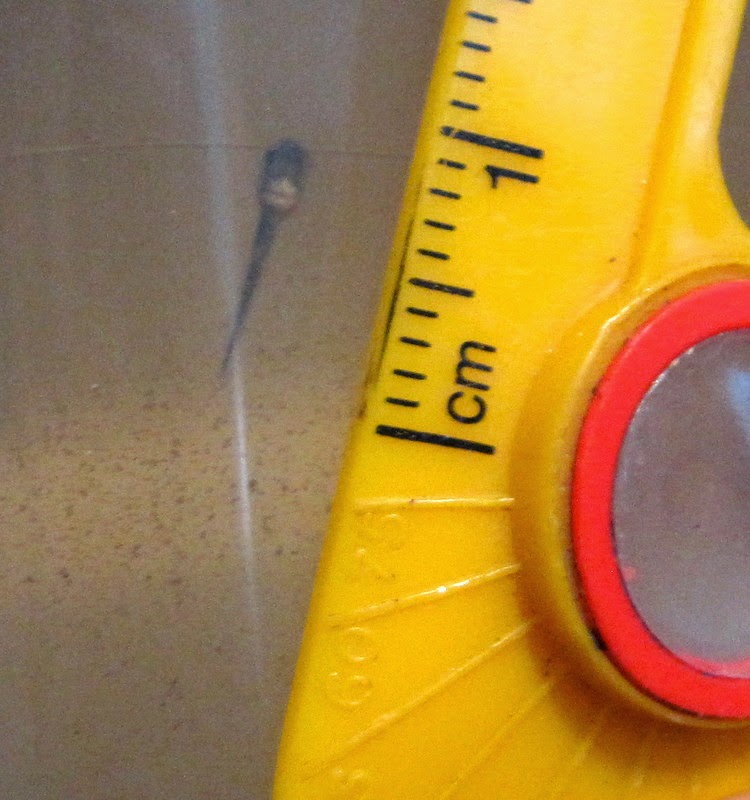 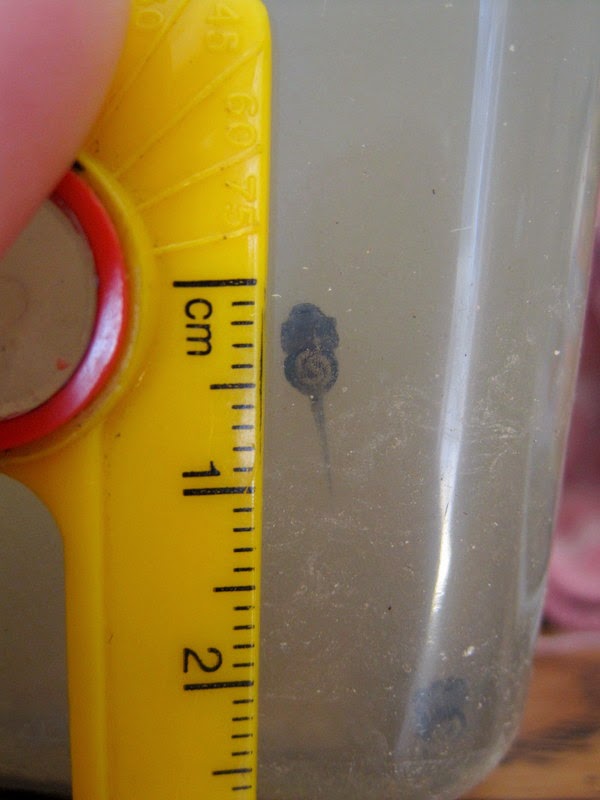 It looks like their bodies have at least doubled in size while their tales have gotten only a little longer.

Tadpole intestines are very efficient—they have a long, long coil to allow plenty of time for them to pull as many nutrients from their meager diet as possible. Plant matter is difficult to digest so the longer it stays in their tiny body, the more they get out of it. Their intestines will shorten and straighten out as they mature into frogs. I think it's fascinating that their tummies are see-through.

When they were little they'd all cling to the sides of the tank because I didn't have many plants in there for them to attach themselves to. By the time they all hatched—and before they became active (they hardly moved for the first few days and were very poor swimmers but now they flit around much more)—my highest count was twenty-seven tadpoles.

They're impossible to count now that they swim around and have more hiding places.

With the tank so murky today, though, many of them have taken to clinging to the side of the tank again. 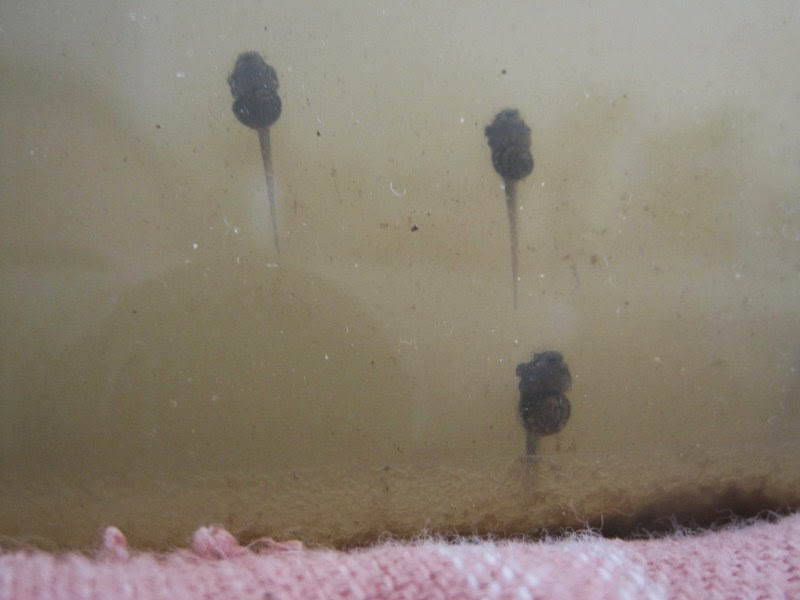 And here's a top view of one of our little tadpoles: 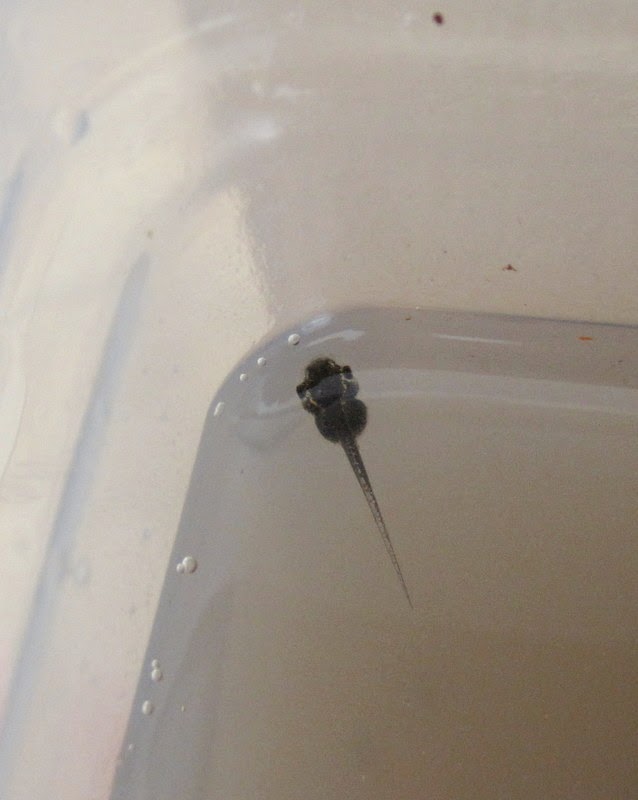