On July 18th, 2012—more than five years ago—I took my three little kids to the park for the very first time. Technically the girls and I had been to the park dozens of times, but it was my first time taking the girls and Benjamin out. It was slightly terrifying because in addition to my fragile little boy, fresh out of the NICU, I was also juggling a canister of oxygen, which I really had no clue how to work.

I took a few pictures of Rachel and Miriam adoring their baby brother. Pictures like this:

A couple of days later we held Rachel's 5th birthday party (which reminds me: I need to plan Miriam's 8th birthday party!), which was Harry Potter-themed. We took a few pictures of her wearing her new Hogwarts robes, very excited for her special day:

Well, my mom took these pictures and sent them to a casting director she knew who happened to be looking for a cute little girl. And just like that Rachel was offered the part and so my mom convinced us to let Rachel take a role in the film Alienate. It took a little convincing because (a) Benjamin had only recently come home from the hospital, and (b) we were getting ready to move, and (c) it was going to involve a couple of late nights.

In the end we decided to go for it, though, and headed off for her first film shoot on July 29, 2012 (which also just happened to be Benjamin's blessing day (so it's not like it was a busy day at all)). I don't have any pictures from the actual shoot because it was filmed in a dark alley and they wanted the set to be quiet and they wanted her to be scared out of her mind, so they sent me and my mom (and Benjamin, my then-trusty sidekick (he's a little less trusty of a sidekick these days, always running off)) to wait in the car.

I did, however, get a few pictures of her makeup being applied: 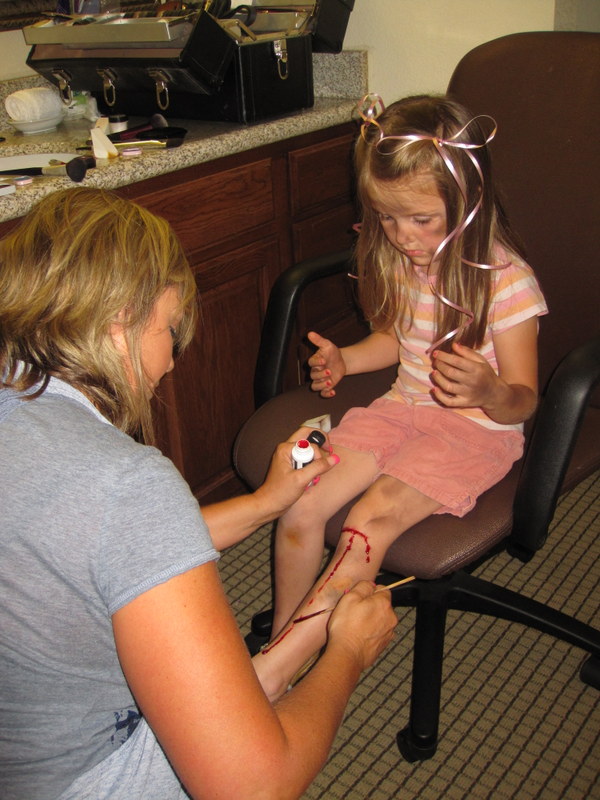 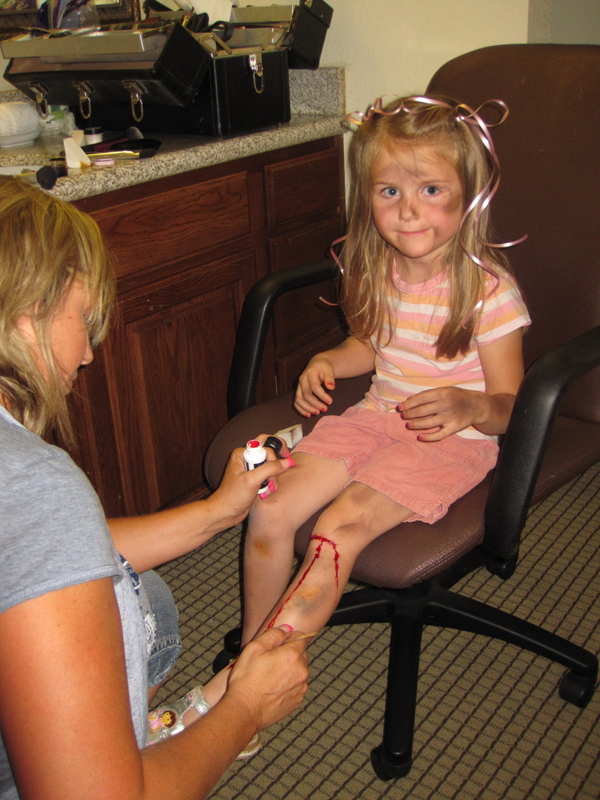 Here she is with her rescuer, Jack Diamond (just outside the alleyway): 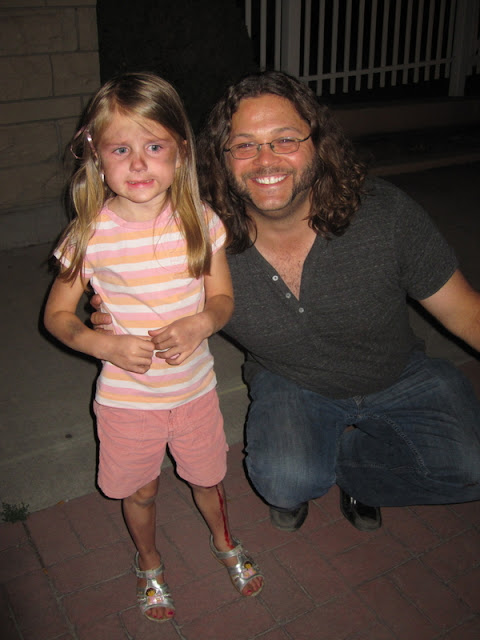 She was terrified of him and, as you can maybe tell, she'd been crying. She had a little panic attack and started screaming, "I want my mommy! I want my mommy! I want my mommy!" (that's one of the only parts she remembers about filming, though they weren't actually filming that part). So they came to get me so I could calm her down a bit, but being so scared really worked wonders for helping her stay in character because she was genuinely frightened.

By the time we came home, however, she was quite proud of her adventure and was eager to tell her tale to anyone who would listen:

A few days later (on August 3rd) they called her in for some promotion photos, though I don't know if any of her photos got used anywhere. They'd forgotten her pink ribbon, but I happened to have a blue one with me so they used that. The pink ribbon, I believe, they had to run out to buy while we waited for them at makeup because they'd forgotten a ribbon on the day of our film shoot as well!

They really had some ribbon continuity issues...

Anyway, here she is getting her makeup done again (you can see she really doesn't trust these people): 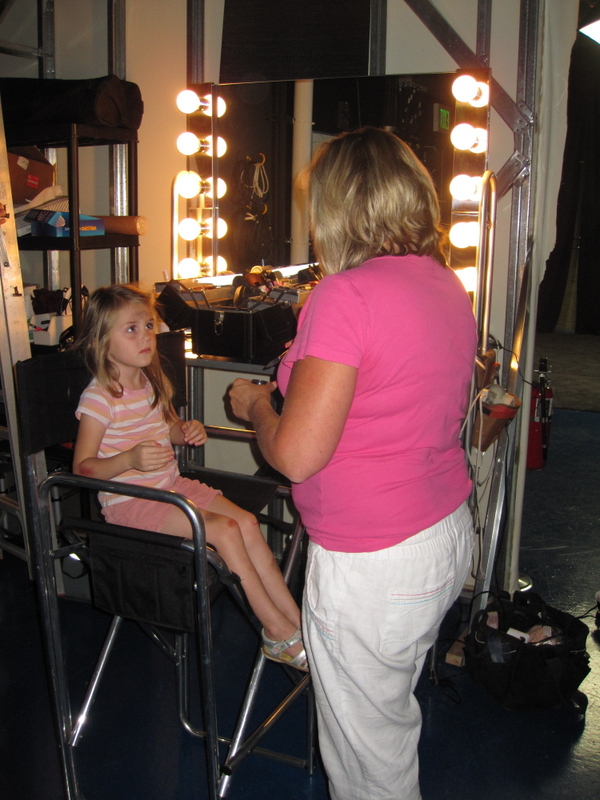 But here she is, excited to be in her gory makeup once again: 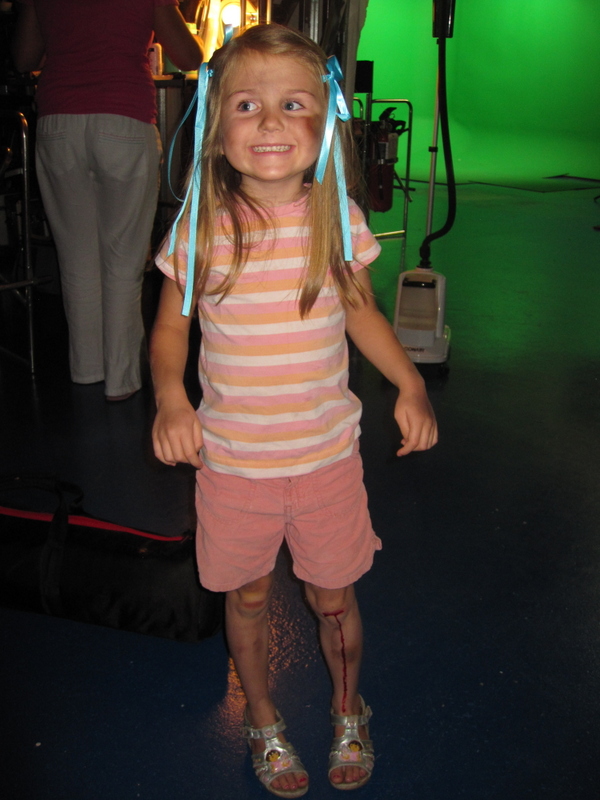 Here are a few of the pictures they shot of her: 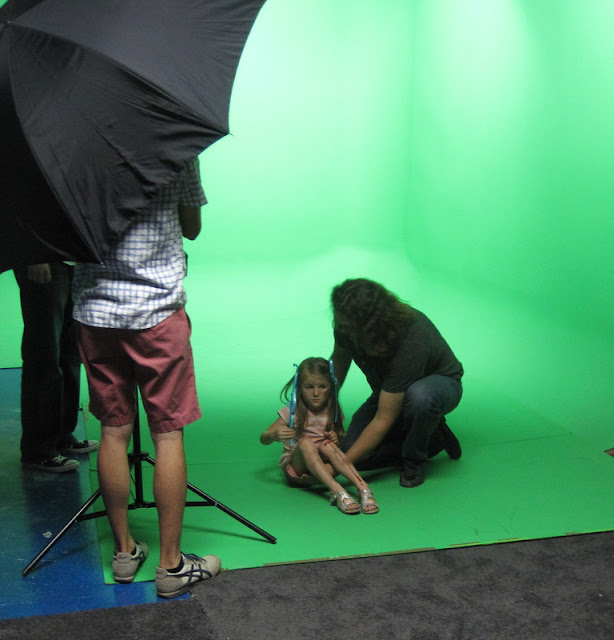 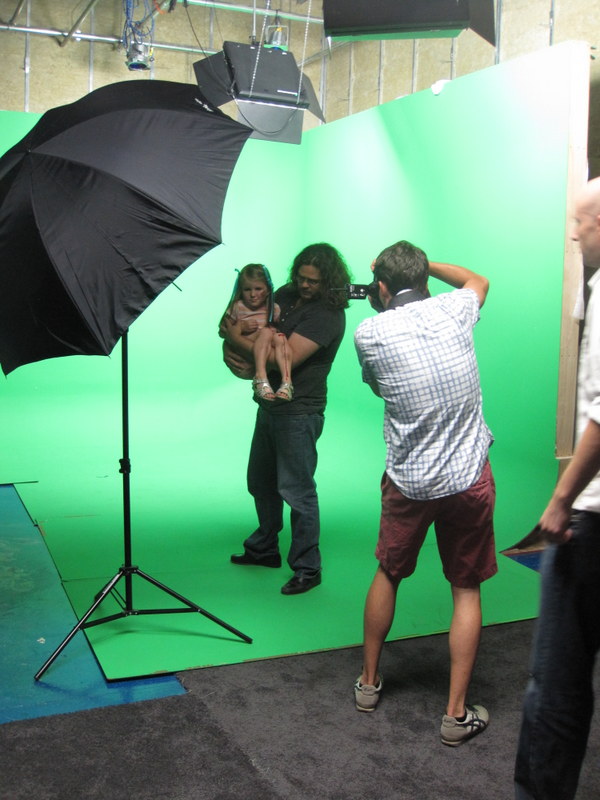 They said I wasn't allowed to post any pictures until after the movie came out, so I've been waiting quite a long time to share these! The movie is out now—it's on Netflix right now!

Let me repeat: my kid is on Netflix!

My baby-toothed, big-sister-to-only-two, never-been-to-school, sweet-five-year-old Rachel is on Netflix! We've joked in the past about how watching the early Harry Potter movies is like creeping on Emma Watson's (/et al's) baby book. Now that we're seeing a memory of what Rachel once was up on the screen, I can say that...it's really kind of like that! She's now got nearly a second set of teeth in her mouth, is twice the big sister she was then, is on her sixth year of school, and has doubled in age!

We haven't watched the full movie yet (and the kids probably won't for quite some time), but my dad watched it and found her today—around minute 50—if you want to check it out.

Here are a few GIFs of her in action in case you don't: