My milk has come in—with a vengeance (which I should be used to by now)—so I'm rekindling a relationship very best friend, The Breast Pump. Technically speaking, I know that pumping increases my milk supply. Unfortunately, not pumping isn't an option when a raging case of mastitis is on the line (which, for me, seems to always be the case). So I'll be pumping morning and night for the next several months, which can be a pain, but it's so much better (for me) than not pumping.

When I pump I know I am clearing out enough milk that I won't get a plugged duct. I know this because I pumped with Benjamin and Zoë and got mastitis a grand total of zero times. I did not pump with Rachel or Miriam and was constantly warding off mastitis. I was not always successful. Mastitis is miserable.

When I pump my babies get a good, healthy mix of hindmilk and foremilk. I know this because Benjamin and Zoë always had lovely golden-yellow poops. Rachel and Miriam both went through terrible stages of bright green sad poop because they were mostly getting thin, watery, sugary foremilk and not much rich, creamy, thick hindmilk. It made them gassy and miserable and it took me months upon months to cut my supply down enough to satisfy a single baby. We're talking, like, twelve months here...so a long time.

Furthermore, when I pump, I'm able to share my excess (of which there is plenty).

Aside from the time commitment of pumping, it's a win-win-win situation.

Yesterday morning I was dying and decided it was time to pump to comfort because...it was time. I pumped off twenty ounces before I decided to call it quits (though in all honesty I probably could have kept going). 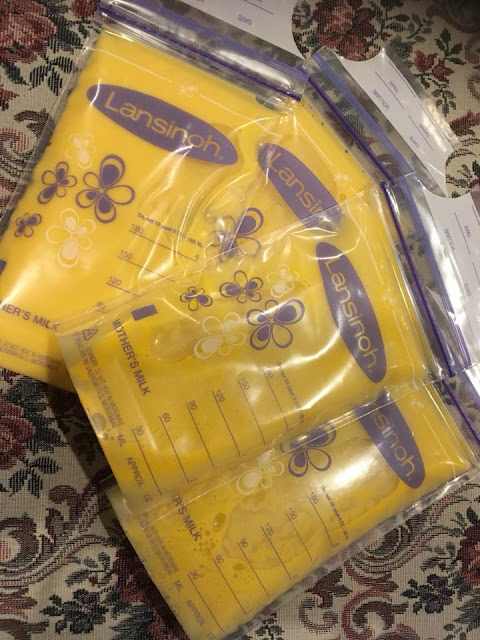 And then I felt much better, which made me think of another benefit of pumping: it makes me less grumpy. When I'm feeling too full I am snappy and don't want anyone to touch me (which is very hard for my children to understand). Pumping facilitates a story time where my children can actually cuddle up beside me (without me feeling like I want to karate chop them away).

Anyway, when I got my pump out I had to remember which parts connected where and which parts went with which pump (I packed both my pumps in the same bag, which probably wasn't the best idea) and when I thought I finally had it figured out I asked Andrew to get up and plug my pump in for me (because I didn't want to stand up).

And for some reason, I reasoned that I should be able to test it before he got up to plug it in so when I said, "I'll just test it to see if it works" I actually turned the pump on. And then panicked.

Tears started welling in my eyes as I squeaked, "It doesn't work!"

"Oh! You haven't, have you?" I said sheepishly (because I had literally just asked him to plug it in and gave him literally no time to jump up and do it).

For whatever reason, people are always trying to figure out what my breast pump is saying. My mom was the first to point out to me that the breast pump talks. I don't remember what she thought it was saying, but now I always hear things, too. Something like, "More milk, more milk, more milk."

Well, this evening Benjamin asked me why my pump was talking. Sadly I can't even remember what he thought it was saying (because my brain, you guys, is seriously struggling). Later, though, Zoë independently announced, "Mommy's 'ump say, 'No! No! No!'"

She sat beside me while I pumped, which she loves to do. I learned from our OT/lactation nurse in the NICU that a recently weaned child can still smell the pheromones (or whatever) a mother releases when she lactates so they will tend to hang around when their mom is pumping/nursing, even if they're not the ones getting the milk. Zoë is definite evidence that this is true. She only weaned in April.

When she was feeling particularly lustful she begged, "Me try some warm nilk?"

I told her that I could and pumped off a little extra for her. Benjamin ran out of his room and begged for a taste, too, so I split the sample into two bottles. He took a little sip and said, "It's okay, I guess," and then ran back to bed. She gulped down her milk (it was about half an ounce, probably), smacked her lips, and then greedily finished off Benjamin's sample as well. 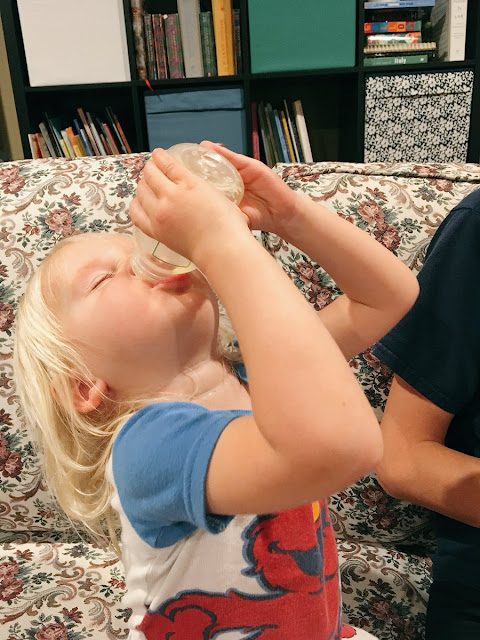 She was, as Andrew observed, in ecstasy.

"No more nummy-nummy nilk?" she said sadly when she finished, and then she pleaded, "Mommy more 'umping! Mommy 'ump more nummy, warm nilk!"

I already have multiple candidates for my excess milk but they might have to secret it out of the house in the dead of night so that Zoë doesn't know it's going missing...
Posted by Nancy at 12:06 AM