Now that we've passed Grandma Layton's birthday, and little Andrew's birthday, and are fast approaching Katherine's birthday, we decided it was high time to celebrate David's birthday. We're not too far behind the times...his birthday was only six days ago. That's not even a week. By my calculations, that's pretty good.

Josie and I were going to make a cake together, but it was fast Sunday and she decided she had better not tempt herself with cake batter. So I was left to make the cake by myself. That was easy enough, and I knew exactly how to decorate it, too.

In case you were unaware, David is obsessed with yellow and smiley faces. He, himself, has what he calls a "perma-grin." He smiles even when he's upset. His background image for his MySpace page is this: 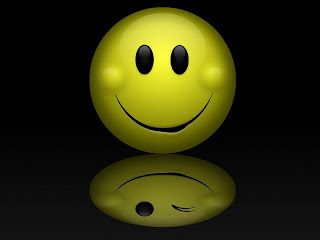 So naturally, I made his cake into a smiley face. Unfortunately I thought of this after I put the cake in the oven so it was a rectangular smiley face instead of a circular one. It took me quite a while to decide how best to make the icky grey color that I got instead of black. I didn't want to use too much dye because, let's face it, food coloring just doesn't taste very good. But I found out that if you use just red and green together, you'll get just as good of a black as if you used all four colors mixed together...it's because they're complimentary colors so they clash, making black. Or something like that. 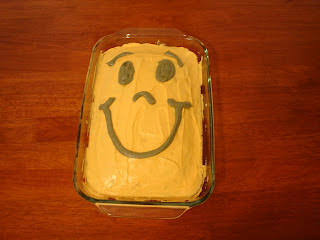 So there's my pristine and happy cake. We don't have one of those cool icing kits so to draw his face on I put the icing in a ziplock baggie and cut a corner off and squirted it on using that. The only problem with this cake is that it rose a little too much in the middle making it a little too tall to put the lid on.

Being pregnant, I whined to my husband (this is becoming common case...I'm starting to expect him to fix everything for me, right now! or I'm bound to cry. It's a little embarrassing but harder to control than I expected). He and Josie both insisted that the lid would fit just fine, so they put it on and we went for dinner at Andrew's parent's house, leaving the cake in our car.

*****
When we got to my parent's house and I took the lid off of the cake to show it to David, my smiley dude's face came off on the lid.

Being pregnant, and unable to cope with the situation, I whined to my husband, "It's ugly..." He calmly shook the icing off the lid and did some reconstructive surgery on my smiley dude to avert my fast-approaching tears. 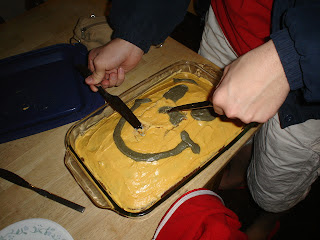 I'm glad that Andrew fixed it, but really, I don't know why I cared so much because after he fixed it and I showed it to David, we just cut up the cake and ate it, further destroying smiley dude's face. I do believe I am guilty of having his lower left-hand side of his smile in my stomach at this very moment. 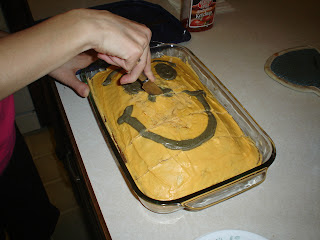 We all ended up enjoying the cake, whether or not his face was pristine (which it wouldn't have been anyway because I cut it up). We also all got to chat with Abra for a while. She phoned from Canada to join in the birthday cheer. But she didn't try my cake--how rude!
Patrick and David 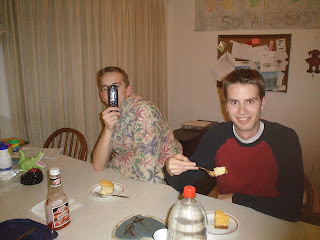 Dad talking to Abra (while pretending to pick his nose) 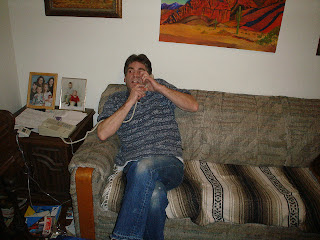