Andrew and I saw an advertisement for a clover-shaped pizza at Papa Murphy's. After seeing their trick for shaping the dough for the heart-shaped pizzas, we just didn't think it was worth the money to pay for a pizza with half of it cut off.

So instead we made our own clover-shaped pizzas. Mine was barbecue chicken and Andrew's was meat-lovers: sausage and ham. I shaped the dough this time because Andrew ruined our Valentine's Day pizza last year and was a little apprehensive about making the clovers. The trick is to just roll out the dough and then cut it out instead of trying to shape the dough into the shape you want.

Here is Andrew decorating his pizza: 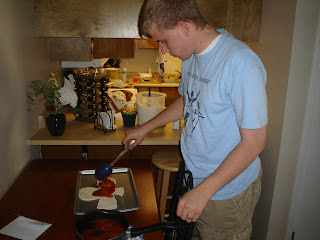 He chose to be unfestive this year and didn't wear any green (I definitely pinched him). So I chose a shirt to compliment his: it's yellow but it has green on it. I figured if I was wearing yellow and Andrew was wearing blue that would count as us both wearing green. 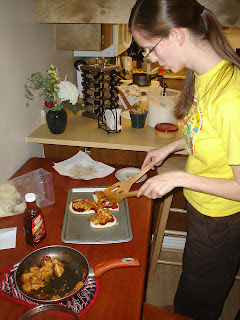 Our pizzas turned out beautifully. Andrew's is on the left, mine is on the right. 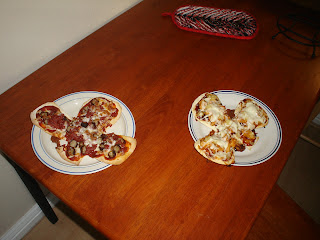 Andrew also had the brilliant idea of making a dessert pizza. While I made the dough, Andrew made an apple/walnut/cinnamon mixture to put on top. It turned out beautifully. It definitely tastes better than it looks. The topping ended up melting all over the pan and we had to scrape it off and put it back on...but it really does taste delicious. 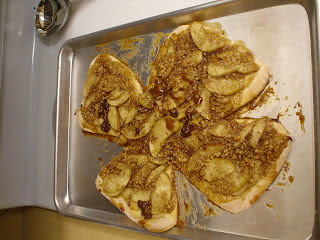 To use up the rest of our dough we made a pot of gold. You can't really make a cut-out with left-over dough because then you would still have left-overs. The pineapple is the gold, and the cheese is supposed to be the pot. 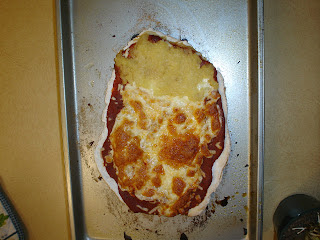 So, in between homework, work, going for a walk and running into a kid from Andrew's mission, and having Sarah coming over to help us dance, that was our St. Patrick's Day. I wish every holiday tasted this good.
Posted by Nancy at 11:18 PM