Speaking of foul and falafel...

Josie is spending the weekend with us because my mom is out of town at a conference in Pittsburgh. We kind of have a tradition of making food from absolute scratch when Josie comes over. It takes so long, but is kind of fun. I can totally see why we don't do it every day and am very grateful for frozen pizzas, pre-made noodles, and falafel stands (be they kosher or otherwise).

Although Josie mentioned that she was "hoping" to make another Italian dish for dinner completely from scratch (the first time we babysat her we made pasta with our pasta maker, the second time we made pizza from scratch), we decided that we would make a good home-cooked Arabic meal.

Not that we have a lot of experience making good home-cooked Arabic meals because falafel stands were all over the place in Jordan so there was never really a need to make a meal from scratch.

We kind of decided to do this while we were shopping today. Our first challenge was finding fava beans. Surprisingly enough, these beans are quite difficult to find...and they are rather pricey. We decided to go with the dried beans, even though you have to boil them for an hour, since they were half the price of the canned ones. While we were scrutinizing beans, a cute old lady asked us if we could help her find chick peas. I knew exactly where they were because we had been up and down the isle several times looking for fava beans (which only have one brand, unlike chick peas which have at least 5).

I showed her where they were, but she was confused because I showed her garbanzo beans and she was looking for chick peas--that's what the recipe called for. I had to find a can of garbanzo beans that said both "chick peas" and "garbanzo beans" before she left us alone. She was satisfied when she saw that can, although she muttered as we walked away, "What do I compare these to?" I didn't answer...because I'm quite sure I had no idea what she meant.

After picking up Josie from Andrew's parent's house, we commenced on making dinner (well, right after we finished cleaning the house, that is).
We boiled fava beans, 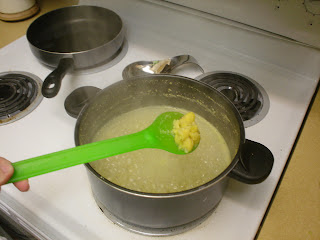 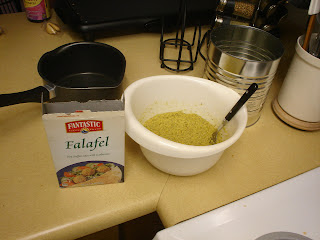 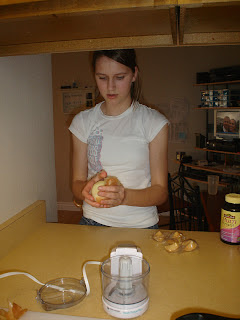 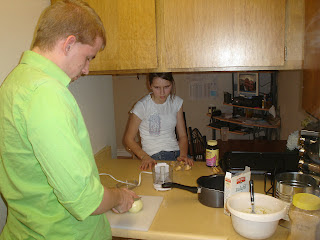 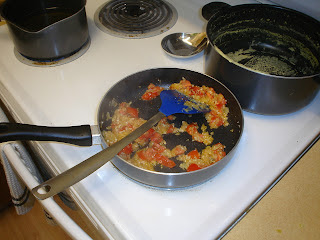 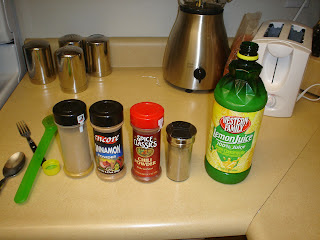 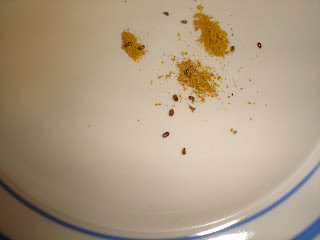 (those are bugs of some sort in our curry--sorry to everyone who ever came over for curry before we discovered these weevil-y things. Extra protein, right...)

And all helped roll falafel balls. 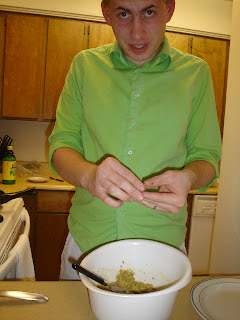 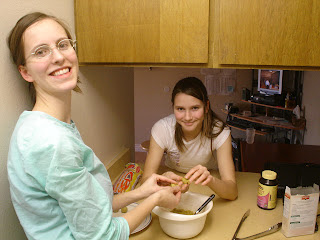 It really would have been a lot easier with the handy-dandy falafel scoops all the falafel dudes have. I guess we'll have to get one next time we're in the Middle East. But then again, how often do we make falafel? Not often. So, do we really need a scoop? Probably not.

The most exciting part of the meal was, of course, cooking the falafel. After hearing about Jamila's exciting stories at the Arabic Reunion of setting the kitchen on fire while trying to boil the oil, and seeing the falafel mess that turned out at that party, we were a bit nervous to try frying our own falafel. Afterall, the falafel dudes have scars up and down their arms from being splattered with hot oil.


As you can see, we did okay...really, the falafel turned out great! 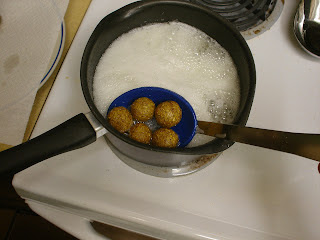 Except that the oil bubbled over whenever we put in the falafel balls. We decided that next time we would do it in our big pot...but then, if it did start to bubble over, what would we hold it over? This is a dilemma.


After we got the hang of managing the oil flying all over the place, Josie and I left Andrew to deal with the falafel alone while we finished up the rest of dinner.
Mashing the foul 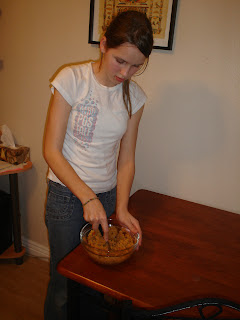 Finally, after two hours of cooking, we were ready to eat. We hurriedly set the table for our communal meal--after smelling the food cook for that long, we were more than ready to eat it. At least, I was.
Ready to Eat 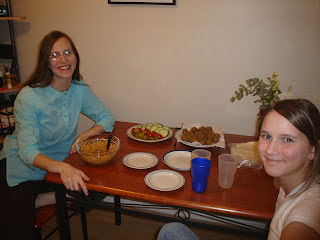 Before we could eat though, Andrew gave Josie a demonstration of how we eat communally. She had already done so in India...and with that topic brought up, we had a great conversation about Miranda and how we would never drink the pitcher of water that was always given us because the water in the countries we had been to was usually questionable, to say the least.

How to eat falafel

We ate with tortilla shells because pita bread is so expensive here! You get 8 pitas for around 4 dollars, which is really quite ridiculous considering you can buy enough pita to last a family for a week for a mere 30 cents in Jordan. Oh, well. The tortillas worked well enough, except that they were rather thin so they kept breaking on us. Next time we'll have to plan ahead and hit up the Desi Market to get some naan (Indian-style pita) because it is fairly cheap there.

Also note our vegetable tray: cucumbers, tomatoes, and pickles. Andrew actually had the pickles because, and I quote, he's "not afraid of these ones." I don't really blame him for being afraid of the pickles in Jordan...sometimes we had bright orange ones, sometimes we had bright pink ones. I'm sure they were pickled something-or-other. I tried them and they just taste like vinegar, so he really would have survived....

Anyway, after trying some tortilla/foul/falafel with a pickle he announced, "Wow, that was really good! No wonder they always gave us pickles." I think he's really coming around to this vegetable thing (not that pickles really count as vegetables either).

With all the time we spent cooking, we only ate for about twenty minutes before we were all so full of foul that we had to quit. We have plenty left over for later.

I'm just glad that we have a dishwasher and didn't have to wash the dishes by hand because we sure did mess up a lot of them (most of them, actually).

Maybe tomorrow night we'll do some kosheri!
Posted by Nancy at 8:54 PM