My husband, the thespian

Amid the papers to write, books to read, websites to design, and classes to both attend and teach, Andrew's Italian teacher asked him to take part in a play. Knowing Andrew, this wasn't merely an "asking." This was a "requiring politely."

Andrew, although absolutely hilarious and a major goofball, claims that he can't act. I think he would be a fine actor if he would actually get in character instead of acting like he's acting. Then again, it is kind of hard to get into character when you learn you're going to be in a play on Thursday, practice once in class, memorize your lines on Friday night and Saturday morning and then rehearse Saturday afternoon 1 hour before you perform. With that kind of preparation, it was a smashing performance.

The College of Humanities randomly decided to host a college-wide theater festival. The theme was "All the College is a Stage" and it involved every language and every department in the college.

Some of the departments were uber-prepared. Like the Spanish Department that apparently has professionally designed costumes sitting around and undiscovered directors in their midst.

Yes, the Italian department was a little slow getting things together. Even the Arabic department had a rather extensive production all lined up.

But Andrew did a great job, and delivered his lines well. Oh, and he looked very royal, indeed, in his golden robes.
Andrew, or Currado? 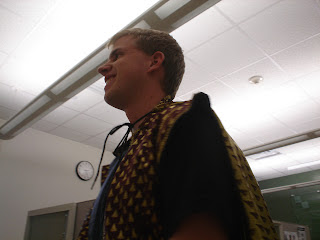 Andrew played the part of Currado in Boccaccio's Decameron, more precisely in Ser Cepparello & Chichibio, a scene from one of the many parts of Decameron. He didn't even make it into the program, though. Some other kid is listed where Andrew should be. Oh, well. He was a great Currado--I think he had a lot of fun on his high horse.

Andrew in the opening scene
There's another performance on Wednesday, which is rather unfortunate because I really don't know when he's going to write his 10-page paper...I'm not sure who's stressing about it more: me or him! 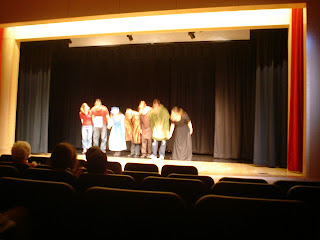 Andrew is the one in the very middle. The picture is blurry because I took it. That, and I wasn't using any flash, so...
Posted by Nancy at 8:05 PM