I go through these phases where I feel way too cluttered. Today was one of those days. I had to throw something away so I started going through piles of s-t-u-f-f. I didn't succeed in throwing very much away, but I feel better having selected a few items to meet the trash can. That much less stuff I have to worry about.

Today I went through some old photos. I'm really planning on just scanning all the negatives of my photos one day and making a scrapbook and just getting rid of all the bad prints of pictures. I have this terrible habit of taking years of exposures on one roll of film. For instance, I had pictures of a girl's camp in Canada, a girl's camp in Utah, Josie's baptism, David's pre-mission pictures, and some Russia pictures all on one roll of film. To give you the time frame, we moved from Canada when I was 15 and I left for Russia when I was 18 so...that's at least 3 years of pictures on one roll of film.

Digital pictures are so nice because it records the date the picture was taken right when you take it, and then you can load it onto your computer, tag it, title it, file it, blog it, print it out...pretty much whatever you want. It's just a lot more convenient.

As I was going through old pictures I was quizzing Andrew about who people were...these pictures are really quite old...and he kept mixing up two particular people. I would never had seen it had he not pointed it out. He can't tell Josie and Piper apart under the age of three.

Josie and Me Dancing 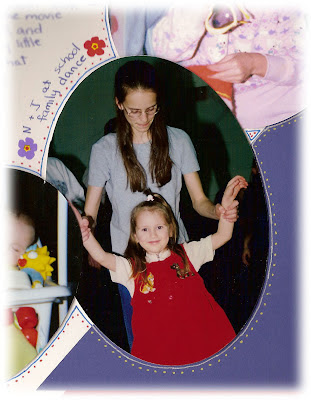 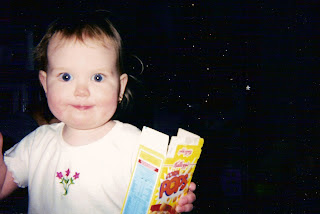 Josie's always been a cute girl, so I guess Piper will always be, too.

Speaking of Josie, Crystal's blog reminded me how awful I can be with children. After reading her post, I spent all day thinking of the multiple times I dropped Josie when she was little. There was the time when she was a little baby that I slipped and fell down the stairs--holding Josie. I don't think that she got hurt that time, but I was fairly shaken up.

I suppose it could have to do with our size... 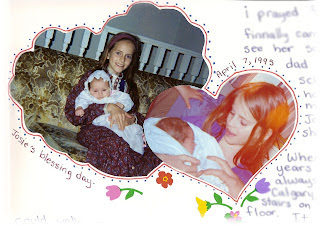 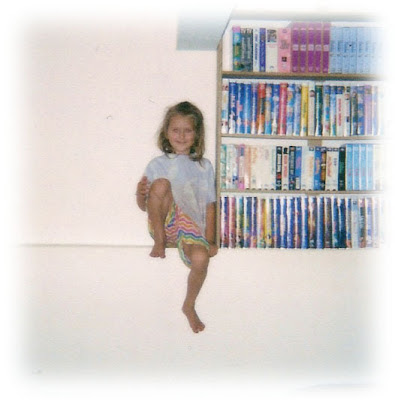 The better story happens when I was about 11 and Josie was about 2. I carried her around even though she was probably a little too big for me to be carrying around. To make matters more complex, Josie already viewed me as a 'big kid' and saw no difference between me and my 17 year old sister, Abra. Josie liked to flip upside down when people carried her, which was really no problem if one of the older kids was carrying her. It always made me a little tipsy though. So, we were at a swim club party and I was carrying Josie down a gravel path when she suddenly threw herself backwards to hang from her legs on my arms. Instead of hanging she tumbled right out of my arms and I tumbled right on top of her.

Dr. Jensen, one of the swim dads, saw all the commotion and ran over. He looked Josie over and, after deciding she didn't have too bad of a concussion, washed out the wound and then tied her hair around the wound like stitches. He said it would work just as well if we didn't wash her hair until it healed.

In five minutes, Josie was all fixed up and running around, good as new. I, on the other hand, took a while to get over the shock of dropping my baby sister headfirst onto a bunch of rocks!

So, if anyone notices anything terribly wrong with Josie down the road, this is probably why.
Posted by Nancy at 12:28 AM