Andrew and I have been, as our dear coach Alison said last night, "found out." Once you're found out, there's no going back. Our secret has been publicized. It's not really our fault, see. We are home teachers to a woman on the activities committee. We're newly weds. Naturally, she asked how we met. Naturally, we told the truth.

We met in a ballroom class in high school. We danced on the team. We were competition partners. Andrew dropped me in front of the entire high school doing a really simple lift. The next day he took me to the Homecoming dance and for the "day date" we went hiking. I could hardly move my leg because my knee was an awful color of black and swollen up the wazoo. It was love at first sight, really... 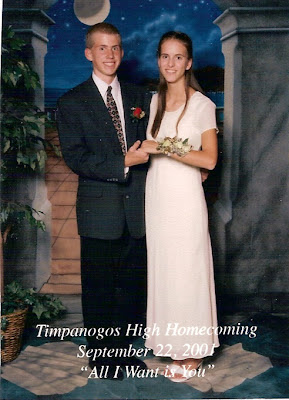 And so, at church a few weeks ago, I was talking to my friend Maria when who should run up to talk to us but home-teaching-lady. She handed us a schedule. We were told to bring our husbands and that the first practice would be February 15th. We were now dancers for our Stake "Can Mormons Dance?" Activity.

Contrary to what Andrew thinks, I didn't "volunteer." I was accosted. I just happened to be happier about it than he was.

So, we went. We signed up for foxtrot because no one really had signed up for that dance...no one signed up for polka either, but really...who wants to polka around the dance floor while six months pregnant? Fox trot is one thing. Cha cha is another. But when you move into swing or polka...there's just no way I'm going to bounce around that much.

Andrew was pretty embarrassed the first practice because we hadn't really danced in a while and he felt a little rusty. However, the dances started coming back quicker than he thought and he's quite confident teaching the men the dance moves. (Our teacher doesn't have a partner and it's a little difficult to teach both genders in such a short amount of time).

After coming home from practice, Andrew said to me, "I forgot how much fun this is!" I agreed with him that it was fun, but inside I was rejoicing because I have been trying to get him to take me dancing for a long time. We hadn't been since last Valentine's day!

So, here's a sneak preview of the dance we'll be doing. You might be able to notice my expanding stomach at this point. A few people have noticed...not that many though. Please be aware that we still are rather rusty and really, I am 5 1/2 months pregnant so my balance simply isn't what it used to be.

We'll be sure to film the real performance for you. It will be cooler because it will involve more than just us dancing around the room. We will be in cool costumes. And there will be music instead of us shouting out the names of the steps (which is why I'm not turning my head in the first go of the routine--I'm reading a piece of paper...)
Posted by Nancy at 5:26 PM

Email ThisBlogThis!Share to TwitterShare to FacebookShare to Pinterest
Labels: dancing