We were heading to the grocery store yesterday: Macey's. We have this strange loyalty to Macey's, even though to get to Macey's we technically pass Albertson's, Smith's, and depending on the way we drive, Harmon's. I suppose it has to do with the fact that both sets of parents typically shop at Macey's. We're familiar with their layout. They have better prices than Albertson's or Smith's or Harmon's.

Do all grocery stores in Utah belong to someone? We also have Allen's and Sam's Club. I can't think of one that doesn't have an apostrophe in it. In Alberta we had IGA (which is now called something else, I don't remember what), The Great Canadian Superstore, Sav-on Foods, and a few others that really didn't belong to anyone. I suppose that's what you get for living in a socialist country. Just kidding.

Anyway, we were heading to Macey's and we were stopped at a red light. I looked out the window and happened to see Dwight, from the Office. Andrew saw him, too. He was ever so carefully spray painted onto a utility box with, get this, a stencil. 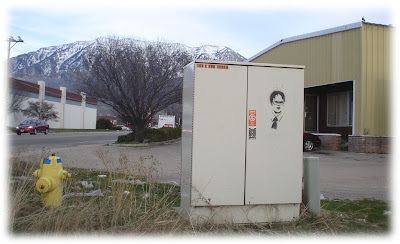 This made me have flash backs to Europe where a whole lot of graffiti is done with stencils. They don't do this free-hand stuff. They stencil their gang names, they stencil Disney characters, they stencil...just graffiti. But only in the really uptight countries.

I first noticed this phenomenon when I went on a trip to the Baltics from Russia. Russia was rather dirty. They had street sweepers to clean up trash but no one really cared about keeping the streets clean so there was always plenty of trash abounding (not that Americans should talk. Look at the grossness in the above picture). We stepped out of the train in Latvia. Wow. To us it looked spotless. Well cared for. Pristine. Then we got to Sweden. Now that was a clean, well-organized country.

But we did notice, in both of these places...stenciled graffiti. Now, that's got to make you feel tough, doesn't it?

Gang member #1: What did you do last night?
Gang member #2: I did some wicked graffiti.
GM #1: Oh, let's see!
Both gang members walk to where the heinous crime has taken place. On an otherwise spotless brick wall is a newly stenciled mickey mouse done in bright yellow, with the gang name stenciled beneath it.
GM#1: Oh, isn't that just precious. Nice work. I really like the detail on the ears.
Both gang members emit some evil laughter, but then they hear the sirens...
GM#2: Let's beat it!

I wonder if the person who spray painted Dwight on the utility box got the same kick out of it!
Posted by Nancy at 1:08 PM

Email ThisBlogThis!Share to TwitterShare to FacebookShare to Pinterest
Labels: The Office