Wednesday night was David's last performance on his folk dance team. He did a great job, although apparently they couldn't hear the music very well on stage so they were rushing it. I don't think the audience noticed though. Everyone clapped. His coach did get on the microphone in the middle of their performance and scream, "Slow down!" but not even Mom noticed that, so I'm sure hardly anyone did.

Here's a short clip of him dancing. It's a Romanian dance...he's on the left-hand side, the second from the back. It's not a very close shot, but at least we sat on the right side of the stage! We usually aren't able to see him at all!


Here he is, again, the second couple from the back 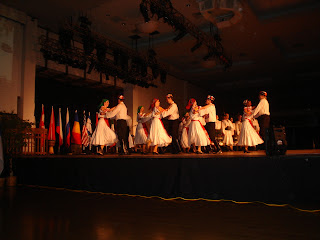 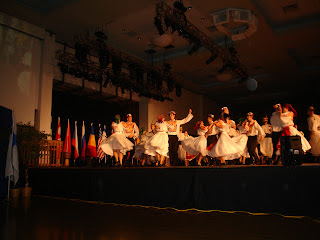 And now for a picture that you'll actually be able to see (one that they posed for). 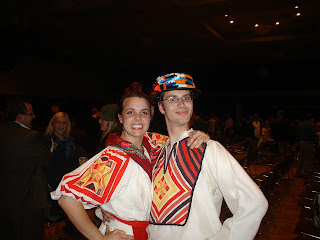 It was pretty difficult to get pictures of the dancers. They move just a little too fast for our camera to be able to catch them. My friend Garrett also danced and I tried to get some pictures of him, but all the good ones are of his back. Every single one that I tried to take ended up looking like this: 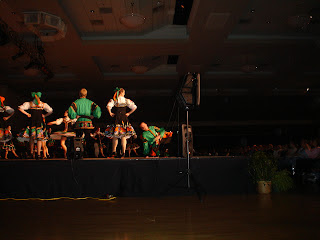 That's Garrett, doing the kicks on his side. If you zoom in on the picture you'll notice that his face is completely blurred. Oh, well!

It was a really good show. It's kind of a shame David won't be dancing in any more shows. I really like them. I suppose I can still go, but it's just cooler to go to a show when you know people in it than when you don't.
Posted by Nancy at 1:32 PM