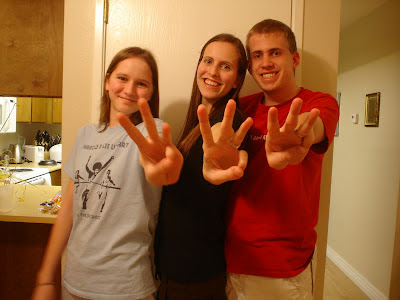 It all started when Josie was knitting her third hat with three strands of yarn. Andrew had finished programming Yahtzee and was busy making the third side of the die he was making in Illustrator. Nancy was playing Sherlock and had just graduated down to having only 3 handicaps instead of four.

It was then that we realized we were all being selfish, thinking about ourselves and our respective number threes. Josie with her yarn, Andrew with his die, and me with my clues. She could have been talking about either one of us. 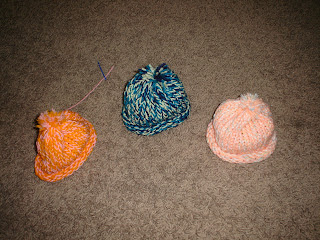 After this moment the time grew late and we all got a little hyper together. Josie started it. She knitted herself silly!

Who knows what she's doing? 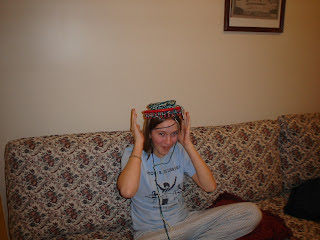 And although she's embarrassed, she keeps going... 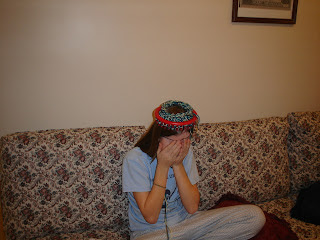 Josie continuing to do whatever it is she's doing

We realized that we were all wearing BYU T-shirts...and we happened to represent the HBLL rather well, if you ask me. So, randomly we decided to really learn why we have a digital camera (so we wouldn't waste a whole roll of film just being goofy) and we also decided to break out the tri-pod that we got for Christmas and see what magic we could work with it.

Andrew and his tri-pod 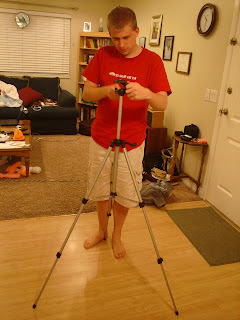 Josie and I doing what we do best: lookin' good 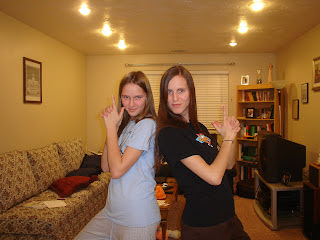 And here we are representing BYU 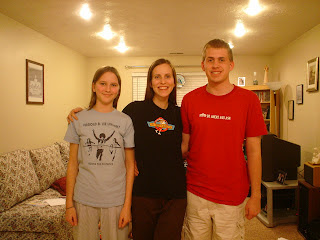 (The backs are pretty cool, too) 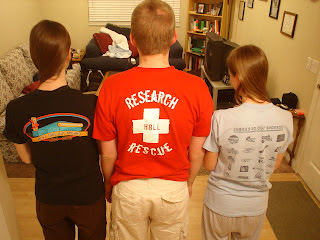 And because we had the tri-pod out, we couldn't just take normal shots, now could we? It was a little difficult to get the following shots in because our house really isn't that big. That, and we couldn't see the pictures so were just guessing about where we were on the ground. It is much easier to take pictures like this if you have someone telling you where to go. That's why we have professional photographers, I guess, so things like this don't happen. 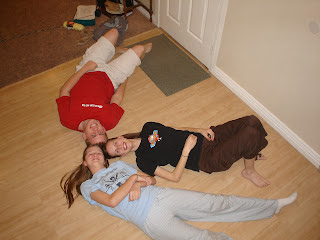 We would also like to point out Andrew's immense skill in finding nearly the exact same pose after jumping up, running across the room, setting the camera, and joining us back on the ground. It's pretty amazing, actually...

And to celebrate our new-found love of the number three, we played Triominoes. What else? Our goal was to only play three rounds and have each of us win, but it took us four rounds because Andrew won twice, throwing everything off.

Round 1
(Josie thinks it looks like a kangaroo...I happen to agree) 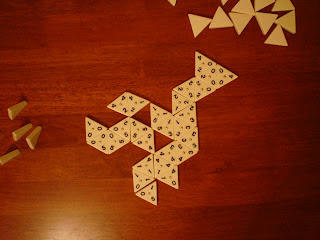 Round 2 started off rather fittingly: 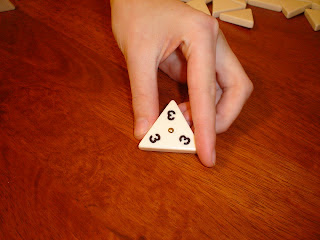 Round 3 just took a long time to end 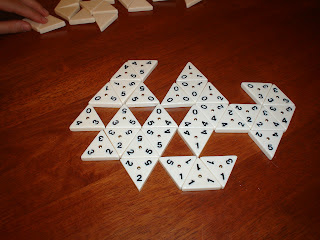 So, it's now past midnight and Josie has asked to be excused so she can go to bed. I guess we wore her out today. I never thought I'd see the day when she would beg to go to bed--usually she's asking to stay up! 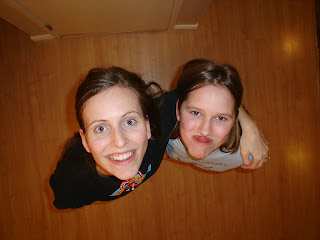