Several weeks ago, Andrew and I decided to watch Casablanca for the simple reason of not having seen it before. It's a classic movie and someone mentioned something about it and we decided that watching it would make us more cultured. Or something.

We also wanted to try renting something from iTunes.

And thus our Casablanca date night was born.

It took days, probably, for the movie to download, at the rate our internet connection goes, but only about an hour to watch it. The movie was good enough, but it did raise several questions, not the least of which was who the heroine actually loves. The ending was a little ambiguous on that account. Besides the whole love story plot, which was entirely fictional, the rest of the movie was pretty much historically and culturally inaccurate but still made us curious about Morocco.

And thus our Casablanca date night turned into a trip to Casablanca.

Casablanca seemed to lack charm, compared to Marrakech, but after spending the day here we found it was definitely worth our time. Our hotel, apparently, is a hip-hop happening place. There is a big dance party going on downstairs, from the sounds of things, with lovely pounding drums thumping out staccato, syncopated rhythms. All of this is offset by the magical sounds of scooters whizzing by and taxis blaring their horns. And the eerie sound the pipes are making.

Our hotel, to summarize, sucks.

The sheets and towels are stained a strange brown color but we think they were white once. The elevator door jams and we got stuck inside. We have seen several curious-looking bugs. And our room smells funny. It's not even in a good location so I'm not sure why we chose it.

I suppose we've been lucky though, since this is only a one night stand and our other hotels were really great.

Since we didn't want to spend the afternoon chilling in our less-than cheerful hotel room, we decided to spend the day out on the town. We first went to the Hassan II mosque, which happens to have the tallest minaret in the world. It's a beautiful mosque but, unfortunately, we weren't allowed inside. They only do organized tours and the last one for the day is at 2 PM. There were several disappointed tourists outside the mosque. 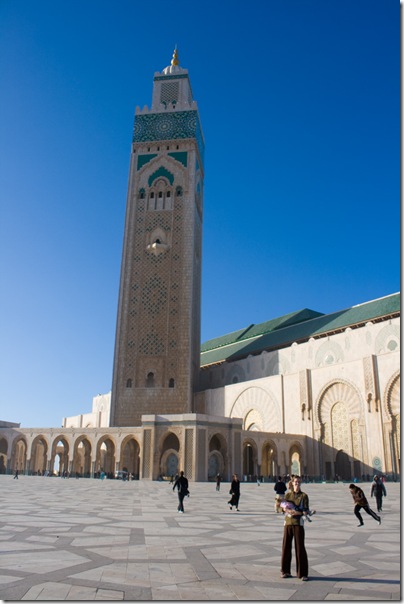 Rachel fell asleep for about 15 whole minutes. When she sleeps she sleep so well, I guess, that she doesn't have to sleep very long. We took a picture so that we could prove that she doesn't just climb on things all day long. (Our fellow passengers on the train from Marrakech to Casablanca probably wouldn't believe it, otherwise. She was completely out of control on the train ride. Luckily she made great friends with everyone in the compartment and they took turns entertaining her with origami, chocolate bars, and walks down the hallway.) 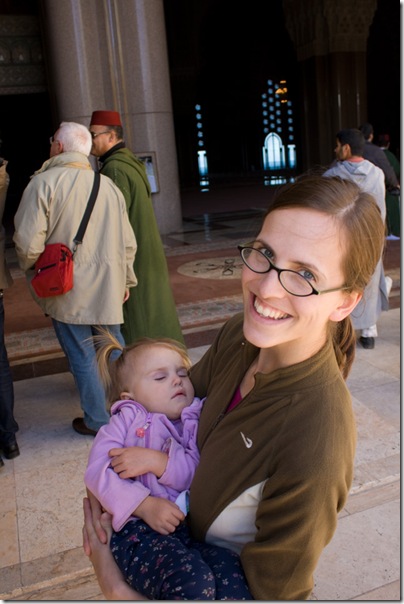 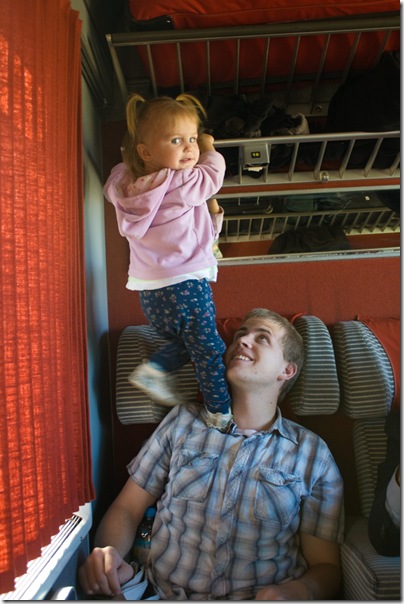 Is it possible that this little monkey is the same sweet, sleeping baby in the picture above? It's hard for even me to believe. Those sleeping moments are so far between! 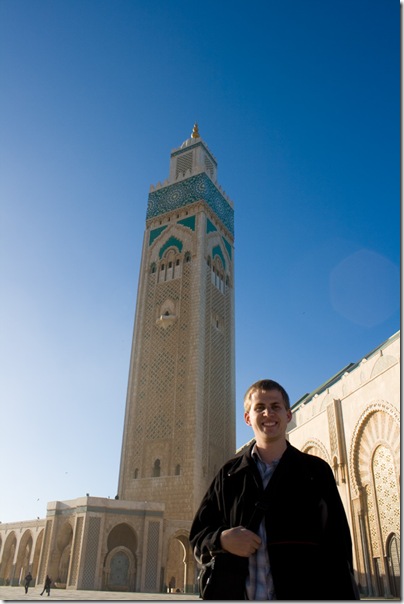 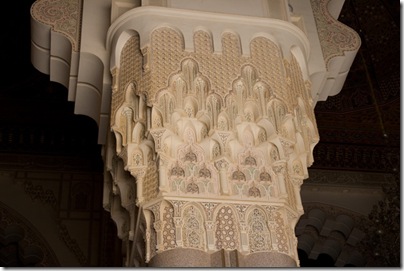 Rachel was roused from her nap by some little boys running around. They greeted me in French and asked if they could kiss my baby. I told them that I prefer that they wouldn't since she was sleeping and a kiss would wake her up. They insisted on kissing her, anyway, and she woke up. And then they asked me for money. 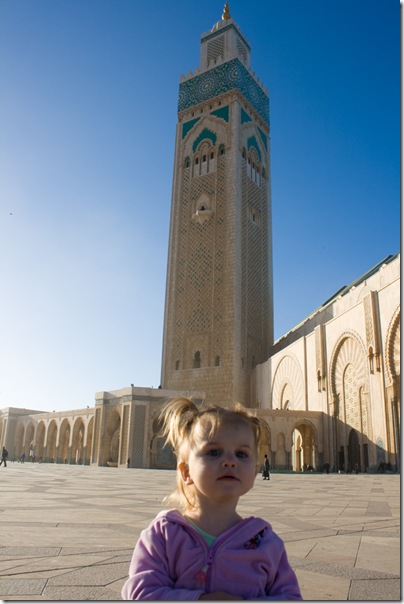 Have I been able to explain yet how sick I am of being asked for money? Those little boys did me a disservice and then wanted to be paid just for existing. I wish someone would pay me for existing. 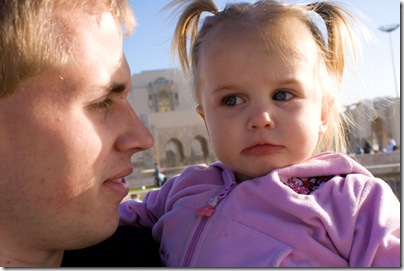 Anyway, with Rachel awake and the mosque closed to the non-Muslim public, we decided our next line of business would be to find a nice beach, or at very least a nice-ish beach.

The Hassan II mosque juts out over the ocean, so from the courtyard we had a pretty good view of the ocean. From the looks of things the Moroccan landscape ended in cliffs before meeting the Atlantic Ocean.

This was a little upsetting because, you see, I have never before had the privilege of touching the Atlantic Ocean and I was very much hoping that today would be the day. But after looking the coastline up and down from the mosque, things looked pretty grim.

We grabbed a taxi, anyway, and went to the restaurant strip on the "kornishe" and found, to our pleasure, that there was a beach. It took us a while to find our way down to it, but it was well worth it once we did.

It was wonderful to be on the beach again.

Since it is January, the beach was rather empty. At least, I'm hoping that the only reason it was empty was because it's January. It's really quite a nice beach and it wasn't even very cold, so there was little reason for it to be so deserted. Most of the tide pools were empty, also, which was a little worrisome, but maybe they are always empty. I don't know.

Anyway, our first line of business was to have me touch the ocean, since that's been on my "list" since grade 5. Andrew got all ready to take my picture and I got all ready to touch the water. I'm wearing my cool pants, but none of these pictures show of the pants very well since it was more than a little breezy (and wrap around anythings look a little skiwampus in the wind) and after this first picture I was soaked in water up to my knees. 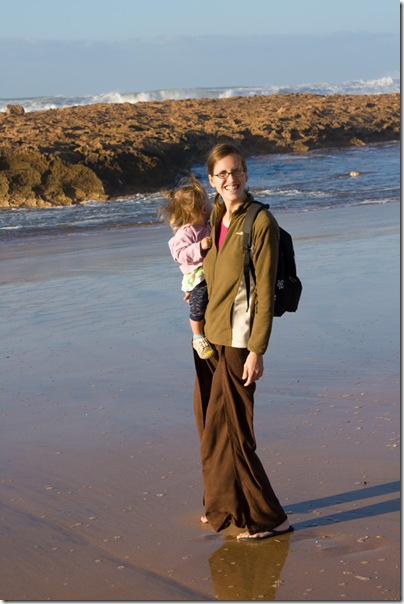 The Atlantic Ocean was so happy to meet me that it almost swallowed me up. Apparently our desire to touch each other was mutual, although the ocean was a lot more enthusiastic about it than I was. Before this point the ocean was affectionately called "wa-wa" by Rachel. After she saw how powerful the waves were (we almost fell over) she started calling it "wa-wa BA!" which is, roughly translated, "Bad water!" She took to commanding it to "GO!" and would run away from the waves before they were within 10 feet of her. 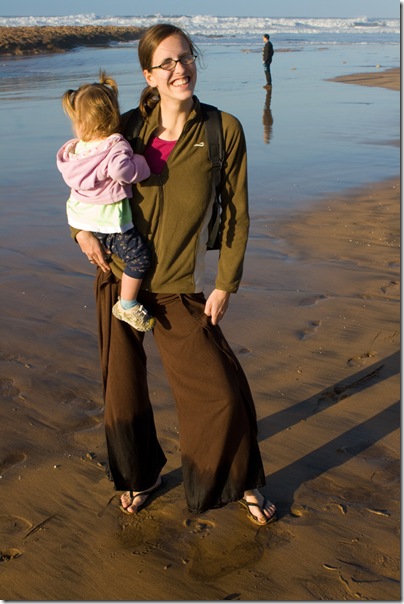 It took several hours to convince her that the water was alright. And really it was alright. It was a whole lot warmer than I was expecting it to be. If I had brought my bathing suit, and if I wasn't in a Muslim country, I would have gone swimming. I can't say that I feel that way about the Pacific Ocean in January. The Pacific Ocean is too cold for me in June and July, let alone January.

We spent the whole afternoon at the beach, and it didn't really start to get cold until the sun went down. 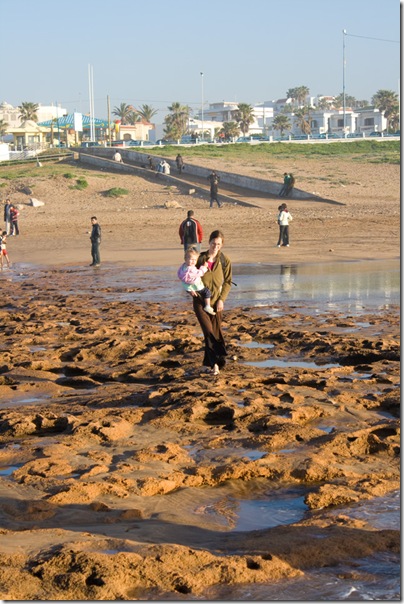 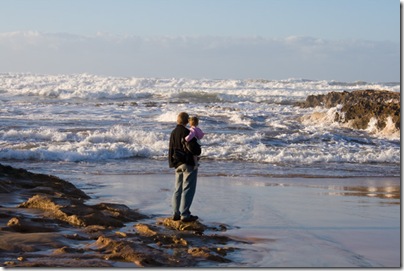 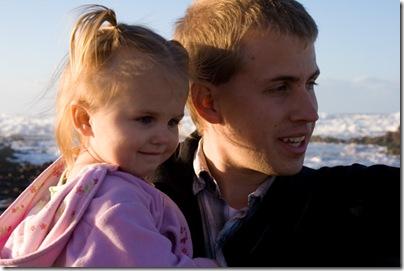 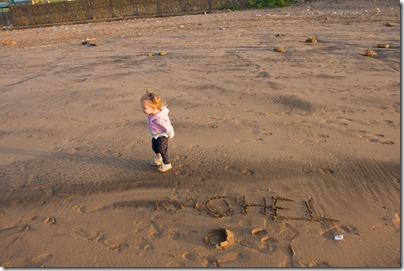 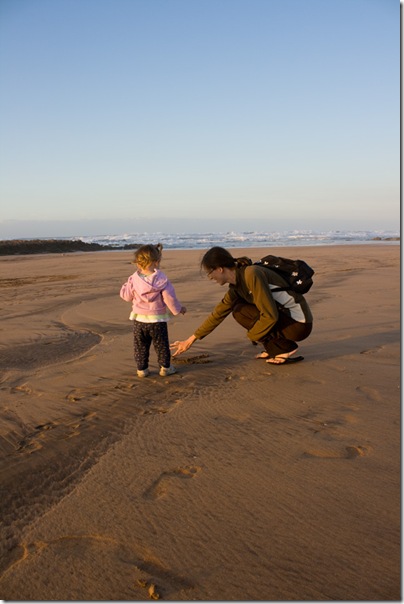 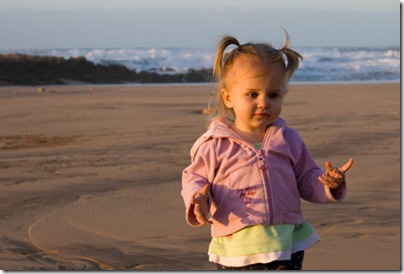 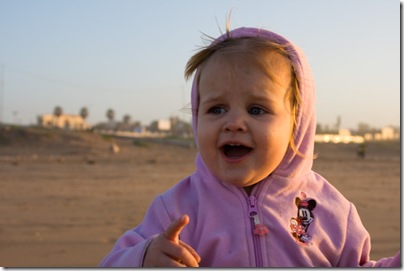 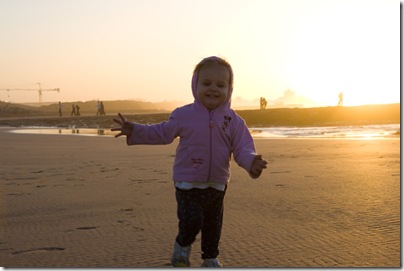 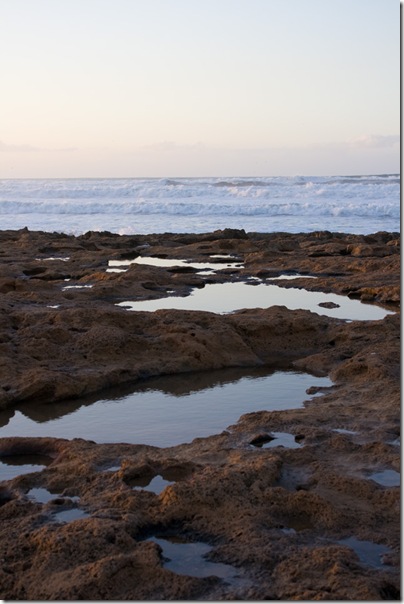 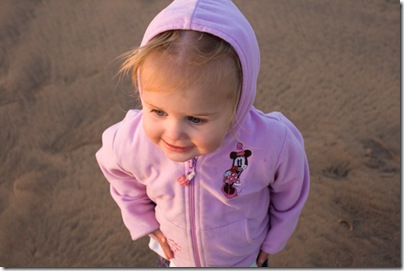 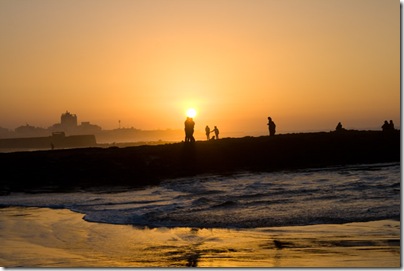 I think Andrew was the only one who wasn't soaked by the time we decided to call it a day. Rachel had stepped in so many tide pools that her socks and shoes (and pants) were absolutely drenched. She sat on Andrew's lap in the taxi and his lap soaked up a lot of her wetness. He was positive that she had peed on him but, upon checking, we found that she was as dry as a bone...from her knees up. 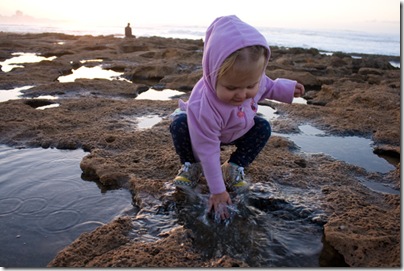 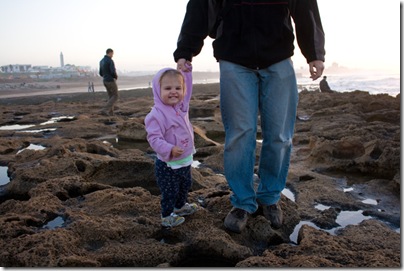 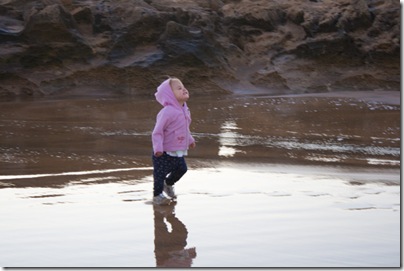 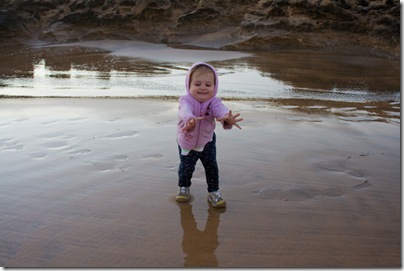 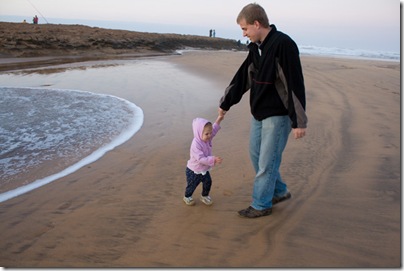 We had a great time at the beach and I was happy to have finally met the Atlantic Ocean. Who would have thought that I would go all the way to Morocco to do that? I certainly didn't think that was how things would pan out when I made that "goal." We were just mapping out a trans-Canadian trip to learn about the provinces and we had to list some things we wanted to do in each province.

That's when I realized that, although I had spent a lot of time at the ocean, I had never seen or touched the Atlantic Ocean. So I wrote down that I would visit it. And now I have though, come to think of it, I'm not sure it exactly counts since visiting the Atlantic Ocean was supposed to be something I'd do in the Maritimes. A dream half-fulfilled, I suppose. There are still so many places to visit and things to see. It's an addiction, really. The more you travel, the more you want to.