For the first time this entire vacation we didn't set an alarm. We're back in the Middle East, kind of, and that means we have to get back on our Arab schedule of staying up late and waking up late. We let Rachel be our alarm and she didn't wake up until 9:30.

We went upstairs to have breakfast and ran into Ben. We think Ben is hilarious--not necessarily Ben himself, because we don't know him that well, but the whole situation surrounding Ben. Ben was on our plane from Spain to Casablanca. When we were waiting for our plane and the gate kept changing, Ben was napping. Andrew noticed this and so, after checking the departures board, came back over to me and announced really loudly,

"THE FLIGHT TO CASABLANCA HAS BEEN MOVED TO GATE 49!"

I was like, "Why are you talking so loud? I'm right here."

But apparently he did it in order to wake up Ben without Ben knowing that he was trying to wake him up. So Ben found out about the gate change, as did half the airport.

Later we saw Ben at the Casablanca train station. We knew he got on our train, but that seemed pretty normal...until we later saw him at our hotel. Weird.

Since he has our same camera case, though, we decided we could be friends, and after breakfast we set off together to the Medina.

At this point we still hadn't formerly introduced ourselves, so we had no idea that Ben was Ben, but sharing a taxi seemed like a fine idea to us. It didn't seem like such a great idea to our driver.

Apparently there is some law here that allows only three passengers in a taxi. We were four, because apparently Rachel counts as a person. Our driver was not happy about having a fourth passenger, even though we tried to qualm his worries by telling him that Rachel is just a baby and, therefore, doesn't actually count as a passenger.

That's how it works on every other mode of transportation: bus, metro, train, plane, boat. We didn't see why a taxi should be any different, but our driver would not be placated. Finally, he had us put Rachel in the middle seat with Andrew's backpack on top of her. I could tell our driver was worried the whole time about being stopped by the police--and they actually might stop him here. There are police everywhere and they actually seem to do stuff, like stop kind people from walking us to our hotel.

We made it to the Medina without being stopped by the police, although the taxi driver was really nervous about us getting out of the taxi. He was sure the police would notice we had an extra passenger. It wasn't like we were crammed into the car like clowns. There were three seats in the back, it shouldn't have been a problem, but to pacify his fears I got out carrying Rachel and the backpack in one big bundle and walked into a crowd standing on the sidewalk while I waited for the men to pay for the taxi.

And then we entered the Medina. It was crazy. It was milling with people, many wearing djellabas and other traditional clothing. The djellaba looks kind of like a jedi cloak. It's kind of funny to see people walking around looking like jedi knights. We half expect them to pull out lightsabers, but so far no one has. 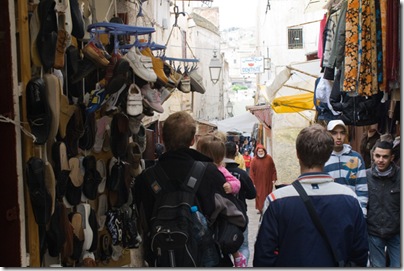 Morocco seems to be rather conservative. We are not allowed into any mosques here in Fez, because they don't allow non-Muslims inside. Some people would let us up on their roofs to look down on the mosques...but it was really unfortunate that we couldn't go in because the interiors looked really interesting, while the outside was just so-so. Apparently that's the way things are here.

The only place we were allowed into was the Medersa Sahrij, an Islamic school dating from the 1320s. 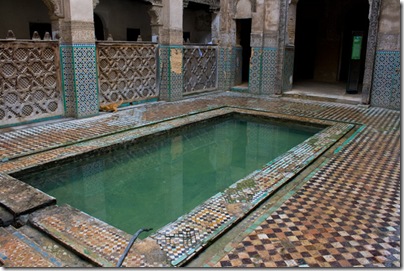 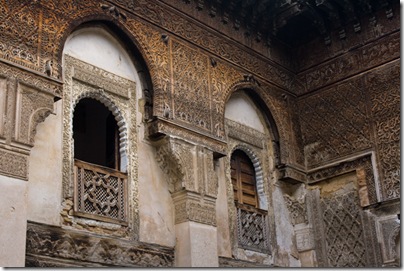 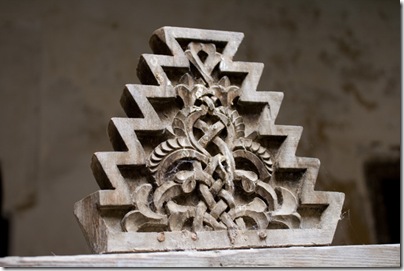 We followed a young boy there who then followed us all around the Medina trying to make us go other places. He kept popping up all over the place matter how we tried to lose him. I suppose he just knew the streets better than we did, because we'd leave him behind us and he'd be waiting for us a few streets up. It's like he knew where we were going.

He wasn't the only one trying to "guide" us through the Medina. There were several others, all vying for a dirham or two (or, more likely, 20 or 30, although we never paid them that much). One particularly angry young man kept complaining about Americans and politics. He said he hated Bush, hated Obama, hated all Americans...except for Rachel because she didn't know about the "politics of war." It was nice of him to want to "lead" us around, but we really didn't want his rantings to accompany us. We kept trying to lose him, too, but he also kept popping up to give us one more point of his "anti-American" statements.

"Do you love Arabs from your heart, or only from your lips?"

"All people from America...and Cairo...are suspicious of Arabs."

And so it went. He was such an odd character.

We saw a lot of interesting things in the Medina. They sell chickens and turkeys to butcher, right there in the street. People carry them around upside-down, by their feet as calmly and normally as if they'd purchased a gallon of milk or a loaf of bread. The chickens would be squawking and flapping their wings and their captors would pay them no mind. 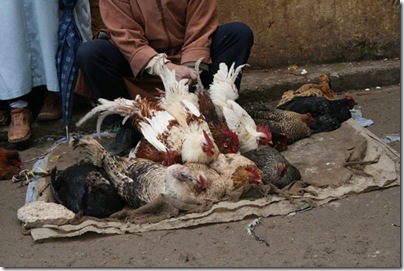 They have Berber pharmacies selling very interesting things. Somewhere in my memory I recall going to a Chinese medicine shop and seeing similar things. It all looks relatively scary to me, kind of like a witch-doctor. 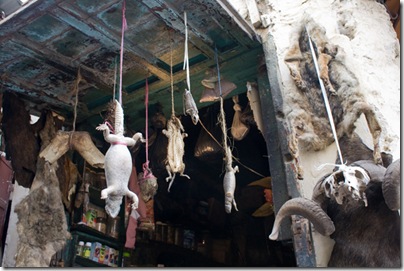 One of the more interesting things to see in the Medina is the tannery. As you can see from Rachel's face it's really quite stinky, but definitely interesting. 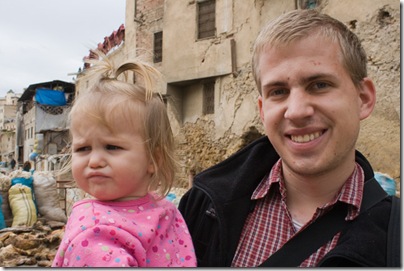 They wash and cure the pelts in a concoction of limestone and pigeon droppings, rinse them in water, and then dye them using various spices. Saffron for yellow, henna for orange...and that's all we can remember from the lecture our "guide" gave us. They dye them almost every color imaginable. 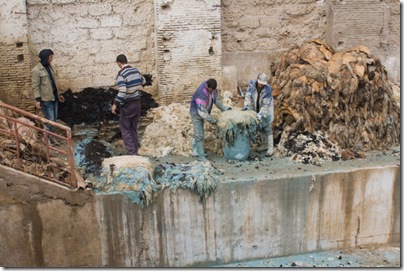 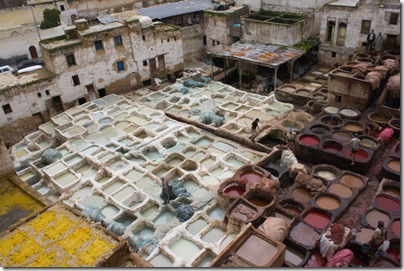 Men swirl the hides around in these huge earthen pots of dye. It must be a very cold job to have! Although it is pretty warm here I wouldn't want to be walking around in shorts, dripping wet. 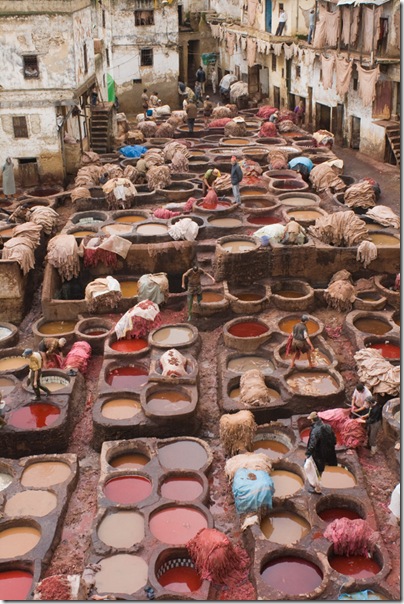 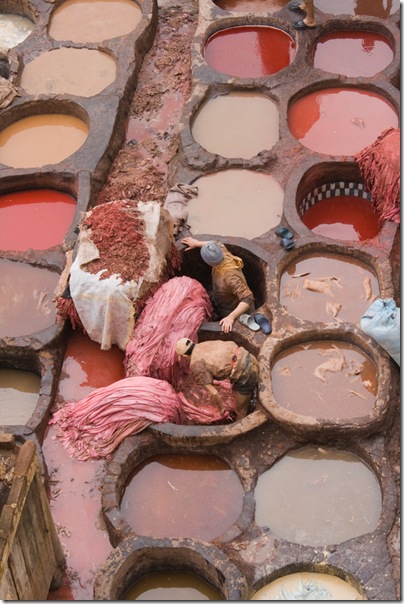 It was very interesting to watch. Rachel didn't want to come away from the balcony. 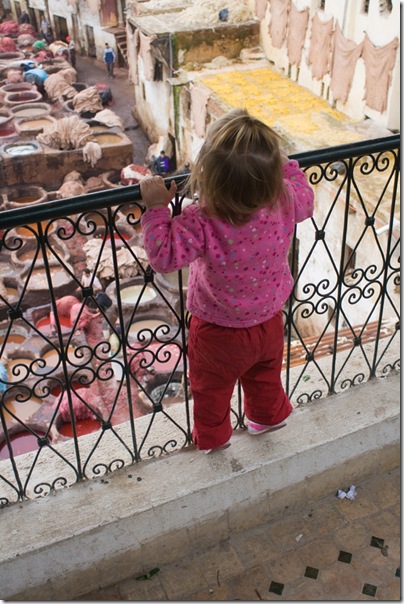 When they're all dyed, they hang them up to dry. You can see hides of various colors hanging all over the buildings for several blocks. 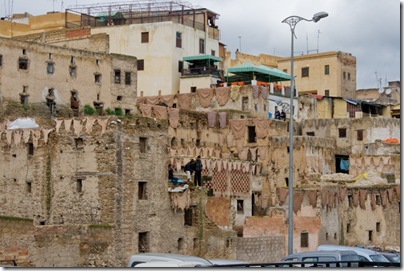 They gave us some mint at the tannery, to smell if we didn't want to smell the nasty tannery smell. A lot of people that went up with us were shoving the mint leaves right in their nose. I didn't think that it smelled all that bad, but it was refreshing to have something nice to smell every once in a while.

After spending the morning and early afternoon wandering around the Medina we were pretty tired, so we left to find a taxi and went back to our hotel to have a nap. Rachel insisted she wasn't tired, but she fell asleep within two minutes of being put in her crib so if that's no testimony to how exhausted we were, I don't know what is.

We have to go out to find a suitcase now. Ours? broke. More on that later, but here's some more pictures of the things we saw from various balconies today. 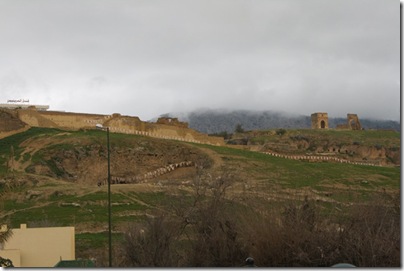 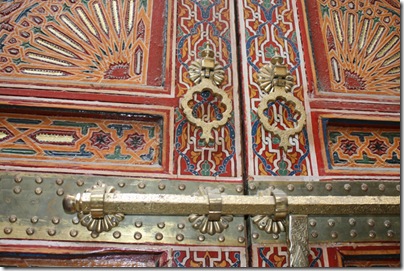 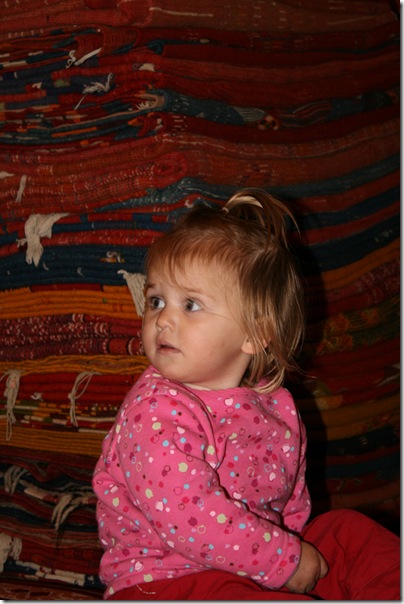 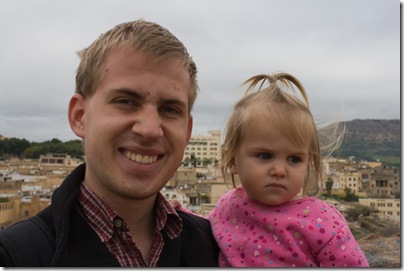 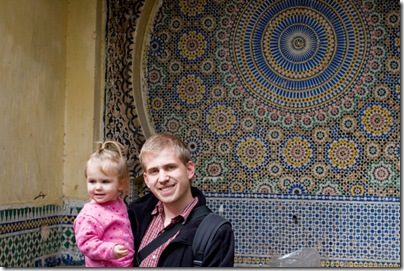 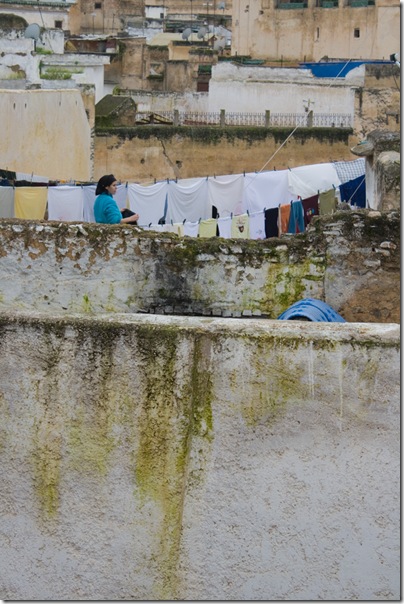