Here we are in Spain, Granada!

Spain's been very entertaining, and we're having fun although it has been raining.

Sorry, I just couldn't resist. That song has been stuck in my head for days so it was inevitable that it would end up on the blog.

Our train pulled into the Granada station at 9:45 PM, which is pretty late for a sleepy city like Granada. The first thing we noticed was that it was cold in Granada--several degrees cooler than Cordoba and Seville. We were freezing.

Next we noticed that hardly anything was open. The serrandas were all drawn and the streets were gloomily empty. The graffiti on the walls added a grungy feel to the city and, since there is so much construction and restoration work going on, many of the routes we ended up taking were simply small tunnels under scaffolding.

It felt like we were sneaking around like sewer rats, unwanted in the cold, wet alleys of the city.

We'd only been in Granada for 10 minutes and I already didn't like it.

We asked for directions at every opportunity that presented itself and ended up wandering around far more than should have been possible. Finally we ran into some tourists huddled around a map.

Our hotel room was warm and cozy and made Granada seem a lot more friendly. I decided to hold off judgement about the city until the morning.

Things usually look better in the morning (unless, of course, you happen to be Rachel, in which case they look far worse), and Granada was no different. 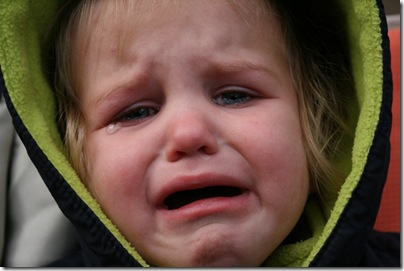 With the serrandas open, half the graffiti of the city was gone. The streets were full of people and the sunshine had cheerfully pushed away the rain clouds. We enjoyed a brisk walk up a steep, narrow hill to the Alhambra. It was a lot colder than we were expecting it to be. We could see our breath; and there was ice. (Two things you don't get often, if ever, in Cairo). 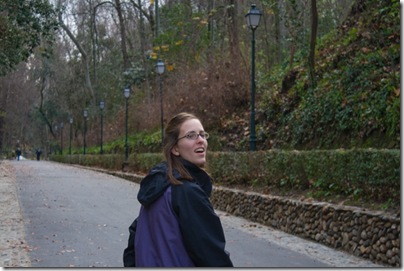 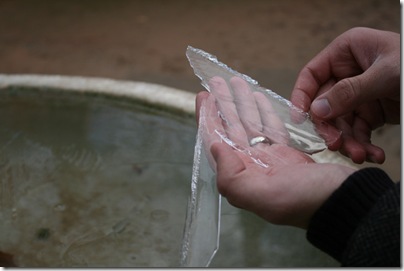 We were excited to see the Alhambra but weren't too happy to find out that the ticket booth is a 10 minute-walk uphill from the entrance gate. We had to walk past the entrance gate...for 10 minutes...buy our tickets, and then walk back to the entrance. Who thought that one up? They schedule time for tourists to visit the Palacios Nazaries (Nasrid Palaces), and our time was 11:00 which meant that we had to just hang around until then. Rachel was pretty impatient, but it was well worth the wait. It was very ornate. I can't imagine how much work went into creating all that detail. Seeing it made me want to go see the Taj Mahal more than ever--this is kind of how I imagine the Taj Mahal would be, only on a bigger scale. 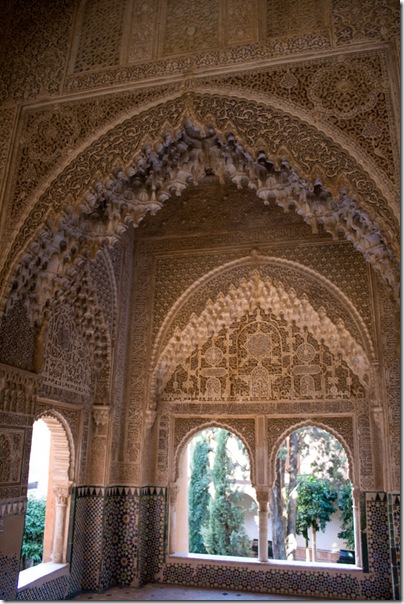 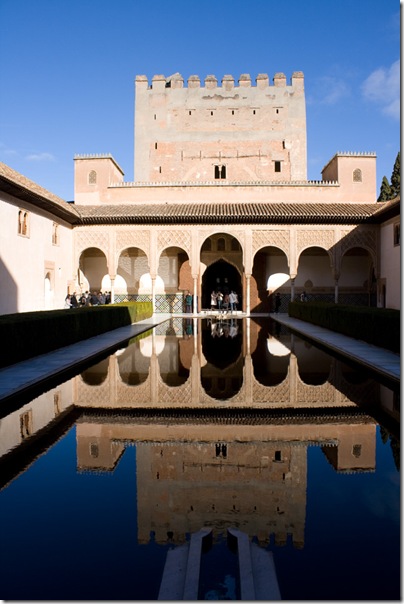 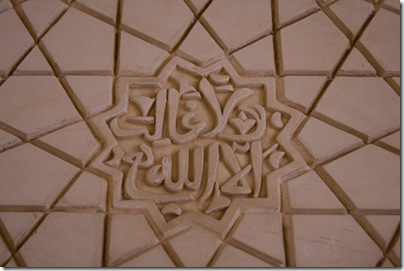 It was so cold inside the palace, though, that it was all we could do to keep warm. We kept having to add more clothes. First we put on our gloves, and then after a while added our hats. It was freezing. But Rachel thought it was fun to see all the "wa-wa" so she cheered up a bit. She loves a good fountain. 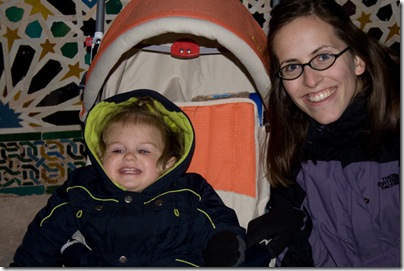 We tried letting her run around by herself for a bit but she was so overwhelmed and distracted by everything that she kept running into people, so we had to keep her in the stroller. 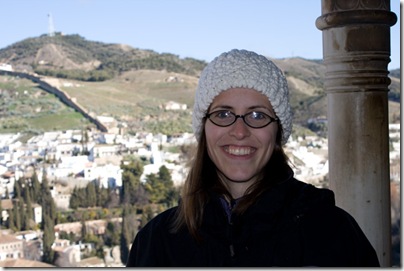 Once we got outside of the palace things started to warm up, at least a little bit. The sun had made the final push over the hills and we could feel what little warmth it offered. It at least let us enjoy the Generalife gardens without the annoyance of our teeth chattering. 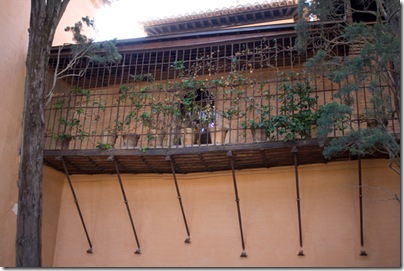 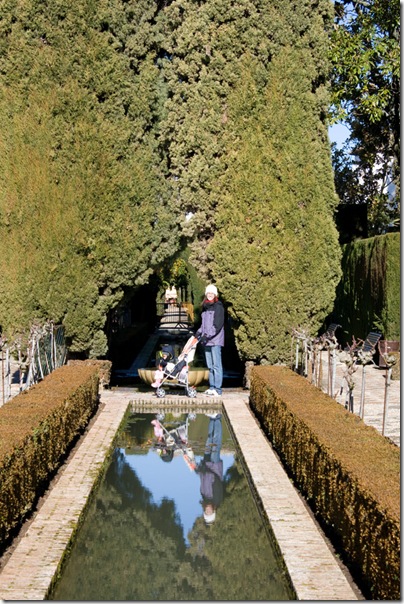 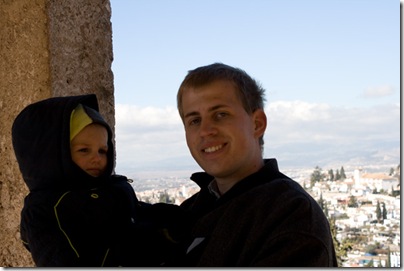 Clearly we were not expecting Granada to be this cold. It was so cold that, for me, it was almost not enjoyable. If everything hadn't been so beautiful I would have focused entirely on being cold and miserable (which, for me, are synonymous). But as it was, things were quite beautiful and every now and then I decided that I liked Granada, despite the cold. It's not Granada's fault it was so cold.

Besides, we had plenty of exercise carrying Rachel's stroller up and down all the stairs, which helped keep us warm. There are so many stairs at the Alhambra! I'm not even kidding. I don't know what the royal families did when they grew old and couldn't use stairs anymore; there's no such thing as a rambler here.

Things would even be marked as wheelchair accessible, so we'd go in with Rachel's stroller only to find that there are scores of stairs every direction we looked, but no ramp or lift of any sort.

Sometimes we'd go up one staircase and go down another only to find that we didn't have to go up the stairs to get where we wanted to go at all. We joked the whole time that the only reason the Alhambra was an Arab stronghold for so long was because it was built on this blasted hill that no one wanted to climb in order to overthrow them.

I wouldn't be surprised if that was the sole reason they were in Spain for so long, actually.

From up on that hill you'd already have a perfect view of everything going on around you...and then they built this super tall tower to give even more of an advantage. We could see for miles! 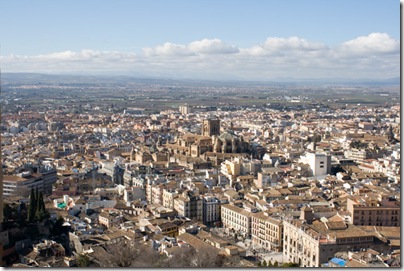 I was planning on taking a nice picture of Andrew holding Rachel with the city sprawling out behind them (since we haven't taken any pictures like that before *sarcastic wink*), but Rachel wouldn't look. When Andrew prompted her to look at me by saying, "Where's Mommy?" the whole setup completely fell apart. Rachel squirmed out of his arms, ran over to me, and gave my leg a big hug. 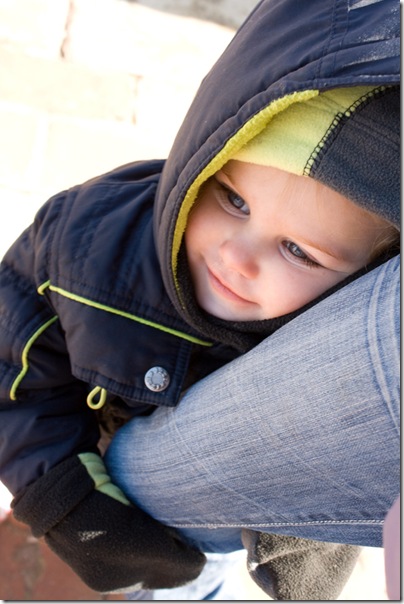 Leaving the Alhambra was a lot easier than it was coming; we just had to do our best to keep up with the stroller. Rachel was, as you can see, in a much better mood. 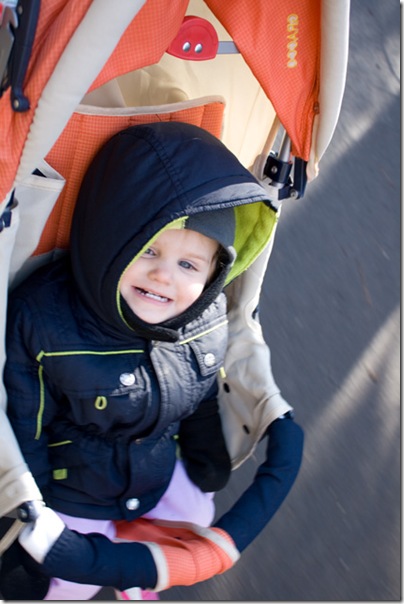 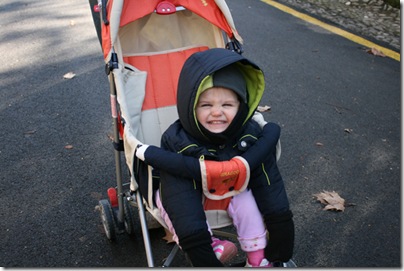 For all the complaining I've done about Granada so far, you might have come to the conclusion that I didn't like it. But that's not true. I did like it. I just didn't like being so utterly lost upon arrival. And I didn't like how cold it was. But it was a pleasant place to be. Surprisingly enough, we found it less touristy than Cordoba. The prices were better and things were less crowded. It really was quite a charming city, in broad daylight, when we knew where we were.

I especially enjoyed it from the cafe we ate lunch in. I tried a potato tortilla, Andrew had a bacon-something-or-other, and we enjoyed our lunch looking up at the Alhambra from the valley, in the warmth of the restaurant.

I also enjoyed the moss. I love moss. I think I'll always be a Vancouver girl at heart and moss just makes me feel at home. 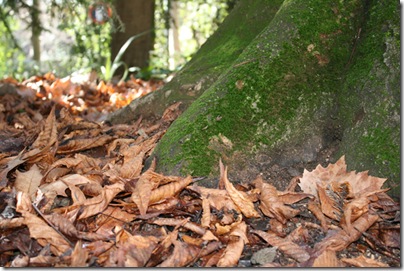 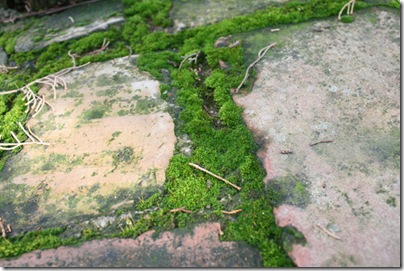 After we were full of such wonderful, warm food it was a shame to head out into the cold again. Such a shame that we decided to go back to our hotel and take the afternoon off. It was wonderfully relaxing and Rachel actually took a nap, which helped improve her mood even more.

When she woke up we got all bundled up to go outside again. If we wanted to visit the cathedral we were going to have to get a move on it. It closed pretty early, we thought, but we made it in time, purchased our tickets, and went inside. The cathedral was a lot smaller than it looked from the outside. So small, in fact, that we weren't sure we were in the right place.

We had purchased tickets just for the Crypt and Museum of the Catholic Kings at the Royal Chapel (Capilla Real) of Granada. It houses the crypt of King Ferdinand and Queen Isabella, the King and Queen that sponsored Columbus' journey across the Atlantic Ocean, as well as some more members of the royal family. That was cool to see, although Rachel was a little freaked out.

She really doesn't like statues of people--they worry her for some reason--and since there were several statues around, including some huge ones on top of the crypt, Rachel was pretty nervous the whole time. For some reason she finds cherubim particularly worrisome. She just doesn't like that innocent "babies" are frozen in stone, I guess.

We were a little disappointed with our visit because we had hoped that we would get to see the rest of the cathedral. But the allowable pathway through the Royal Chapel is clearly marked and there was no where to go but out. Determined to get inside, we wandered around the cathedral for some time until we noticed two people coming out of a hallway, hidden from view by the cathedral wall. We followed it and found the entrance to the cathedral! We were pretty excited. It was basically deserted inside (apparently no one else could find their way in, either), but it was one of the nicest cathedrals either of us had been to. Instead of austere silence, they were piping cheerfully reverent classical music through speakers. 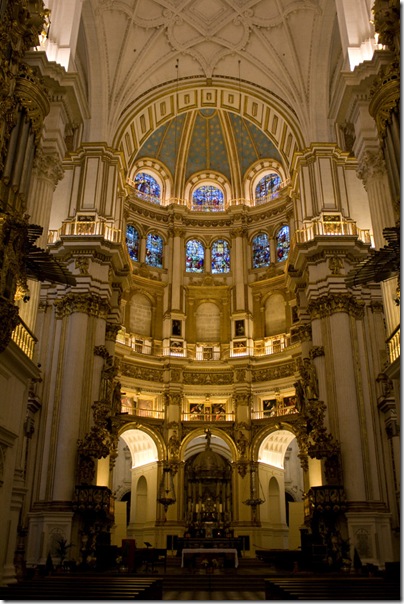 The sun was just starting to set, making the stained glass windows on the west wall glow in vibrant, warm tones. It was simply gorgeous. 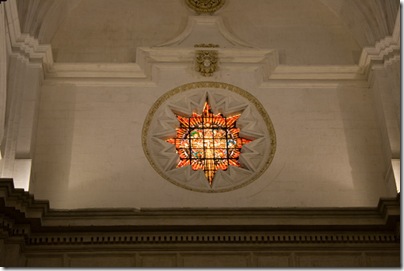 One of my favorite things was all the music books they had on display. Each song began with a beautifully illuminated letter and there was a beautiful border around each page. They are big, too! They are about as half as tall as I am! They had a book sitting on the conductor's stand by the choir seats and we could read it from the floor, that's how big the font is. It must take a million page turns to get through a single song! 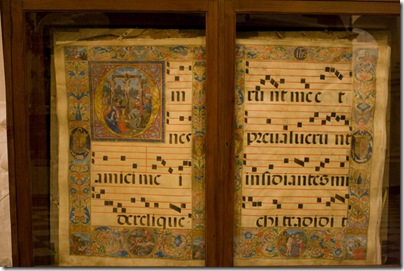 Our visit to the cathedral was a wonderful way to crown our stay in Granada. It was nice to spend the afternoon in such a relaxing atmosphere. Kind of a shame we didn't have more time in Granada--there were a few more things we wanted to see, but if we wanted to do anything in Madrid (which we did) we had to cut our Granada experience a little short.