Going inside the Red Pyramid was a whole lot easier without carrying Rachel. She didn't enjoy herself too much the last time she went inside, so instead of having her scream the whole way down and back she stayed with Daddy and played on the outside of the pyramid. 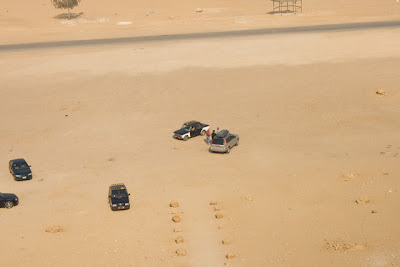 Daddy and Rachel down by the taxi 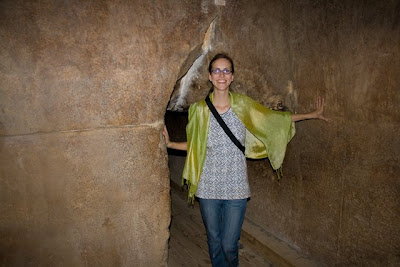 Me inside the Red Pyramid at Dashur

I went inside with Uncle David and was overwhelmed, yet again, by the intense smell of ammonia that only got stronger the deeper you went in. I didn't remember it smelling that badly. I almost gagged when we went up the stairs to the farthest chamber. The air was very...less-than-fresh. I was definitely glad I had remembered to bring my scarf with me so that I could hold it in front of my nose and mouth. It made it barely breathable. 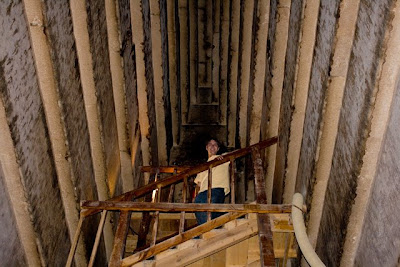 David on the stairs leading to the upper chamber

Needless to say, we didn't spend a whole lot of time in the depths of the pyramid for fear of suffocation.

Going back up wasn't nearly as treacherous as I remember it being, either. Not carrying a screaming baby the whole way somehow made it easier. Still, I was out of breath when we reached the top, as was David, and my legs were a little wobbly heading back down the outside of the pyramid.

When I stopped to rest for a minute, letting my jell-o legs solidify a bit before completing my descent, shouts of "Mama!" started drifting up from somewhere below me. It took a few minutes to see where they were coming from, but eventually I spotted Rachel and Daddy far, far down below me. They were smiling and waving at me so I smiled and waved back at them. 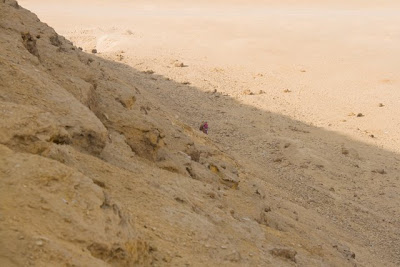 Do you see them? They're about dead center...

Then they started off across the base of the pyramid to meet me and I started on my downward climb to meet them. While they were walking across the bottom of the pyramid, however, this pack of dogs--probably about a dozen or so--that had previously been sleeping, all snapped to attention. The leader of the pack stood up and started aggressively barking at Andrew and Rachel. The other members of the pack did the same. Snarling, barking, and baring their teeth, they began to close in around Andrew and Rachel.

It was quite scary to see all those dogs getting ready to attack my husband and baby. Everyone else seemed to ignore what was going on, but clearly these dogs weren't going to rest until they had torn Andrew and Rachel limb from limb. I started walking down the stairs a little faster, calculating the whole time--there were three of us. How much of a fight could we give when we were outnumbered 4 to 1? 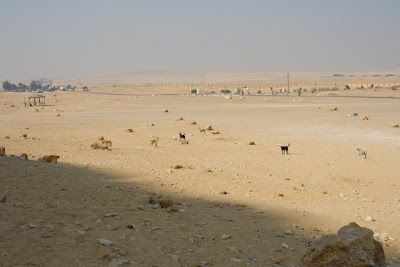 Six of the feral dogs

Andrew was pretty scared, himself, but he knew if he was going to reach us before being attacked by the dogs, he'd have to keep Rachel from noticing them, so he did his best to keep her happy.

"Wave to mommy!" he'd say, "What does a car say? I see something blue, do you? Yes, it's the sky! The sky is blue! Where's your head? What does a camel say? Do you see a camel? Yes, there's a camel right over there!"

He kept talking to her the whole way and she didn't even notice the dogs. As soon as Andrew stepped onto the "pathway" the dogs quieted back down and dropped their fighting stance. Andrew was pretty shaken up about the whole thing. 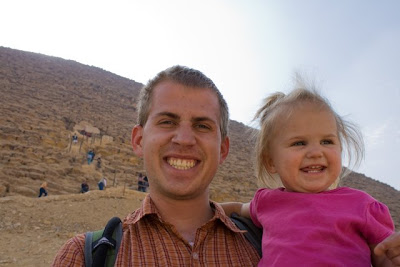 We were all happy we didn't have to fight off all those dogs, though! Who knew they were so protective of their pyramids?

The Bent Pyramid was closed, so we weren't able to visit that one, but earlier in the day we went to Saqqara. They are doing some restoration work on the main pyramid, which is unfortunate. It basically looks like they're remaking it--they have workers putting blocks of stones up around the foundation. It's completely covered in scaffolding so that was also a little disappointing, but we made it there before most of the tourists and were able to have a pretty good time.

First we ran around the b-shaped formations in the courtyard that the pharaoh apparently ran around to prove his strength and worthiness to rule. He only had to run around them once every 30 years, according to the Lonely Planet. I thought that was silly because if he started reigning when he was 25, let's say, and only had to run it every 30 years, he'd only have to run it once the whole time he was ruling. Maybe twice, if he lived long enough...

I ran around it. Several times. So I guess I'm fit enough to rule Ancient Egypt. 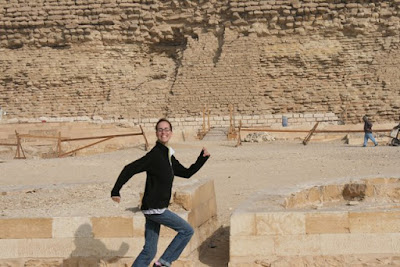 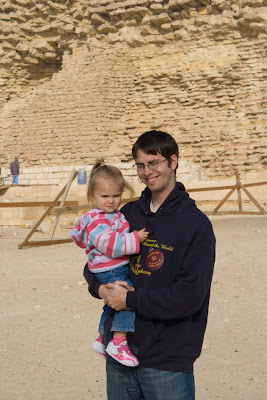 Here are some pictures of Rachel climbing on everything. She got so dirty. So very, very dirty. 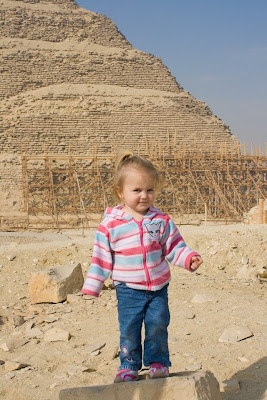 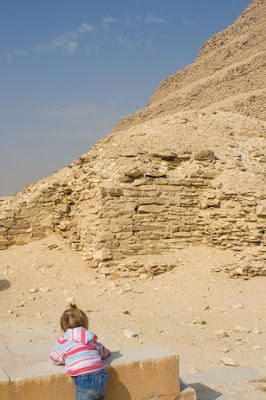 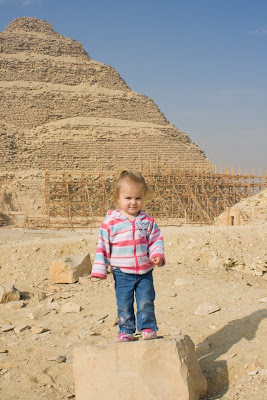 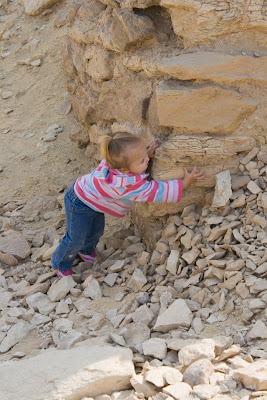 We left Saqqara just when about 20 tourist busses were dropping off hoards of tourists. It was nice to see it in such seculsion. It was also nice to have so few locals there. Egypt has really cleaned up it's tourism industry lately and it makes visiting the sites a lot easier and tourist friendly. Last time we visited Saqqara I was lifted onto a donkey by some toothless tout and was not too happy about it. This time very few people approached me, and no one tried to pick me up, so that was nice. 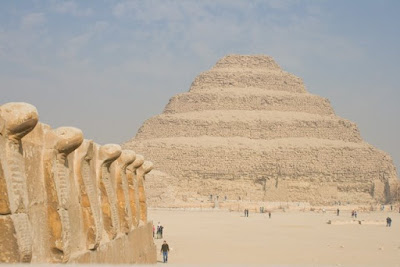 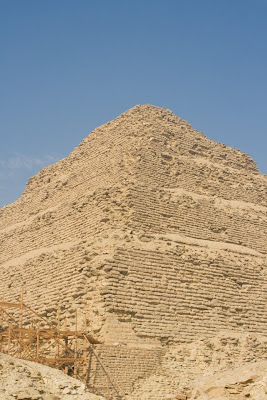 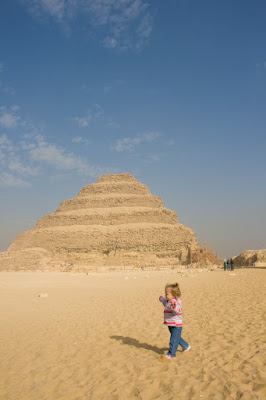