This morning's train ride was fairly pleasant. There was a cute old gentleman sitting across the aisle from us who absolutely adored Rachel. It took her about 2 hours to get used to the idea that he wanted to play with her. Once she figured that out, the rest of the trip was golden.

Our car only had 7 people in it: Rachel, us, the old man, another couple, and one other man. We basically had a private car. It was awesome. Rachel could do pretty much whatever she pleased, which involved a lot of running down the aisle and having tickle fights with the previously mentioned cute old gentleman.

We got into Madrid at 2:30 PM and took Rachel to the turtle pond right away. We thought she would be excited about it, but apparently turtles are only exciting in theory. She simply wasn't interested in waiting around to see when (or if) the turtles moved. They probably looked like rocks to her for all the excitement they were causing.

So we gave up on that idea and just got on the Metro to find our hotel.

It's in a wonderful location, right by the palace. We were a little worried about this hotel because they emailed us to say that a baby cot would cost us an extra 21 Euro per night. We declined the cot and thought that we'd have to endure a sleepless night with Rachel in bed with us, but instead when we checked in the man at the desk said he gave us a bigger room because they aren't very full today. Same price, but more beds. We have a double bed and a single bed, but we ended up putting Rachel in the hide-a-bed, hoping that the arms of the couch will keep her from rolling out of bed. We'll see, I guess.

We could sleep 5 grown people in our room, though. It's huge!

Anyway, after exploring our room we went to see the El Prado Art Museum. It's just a short walk from the Metro, but quite an entertaining one. The "Parade of Cows" is in Madrid right now so we got to see some interestingly painted cows. Rachel was much more excited about the cows than she was about the turtles. She couldn't stop mooing. 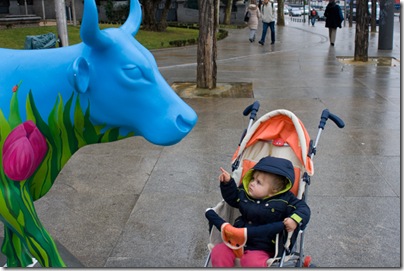 She was a pretty sleepy girl and fell asleep soon after we walked into the museum, which was nice. I really wasn't looking forward to spending the afternoon trying to make Rachel behave in a manner appropriate for an art museum. I couldn't have timed her nap better if I had tried!

Andrew and I had a fun time walking around the museum together. We saw a number of famous pieces, including Fra Angelico's The Annunciation, Durer's self portrait, Raphael's Cardinal, and Caravaggio's David Victorius over Goliath, and a number of still life by Sanchez Cotan. There was a multitude of paintings by Velazquez. He seemed to be pretty special to the museum. There's even a statue of him out front. 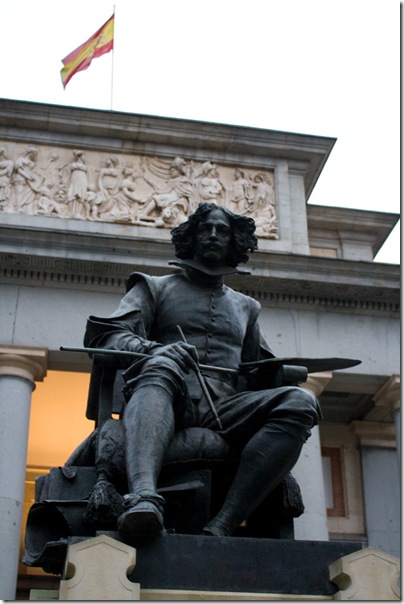 There's nothing really modern in the museum, which I appreciated. Modern art isn't something I am able to eat up. Most everything was from the Medieval, Renaissance, and Baroque time periods. A lot of things were originals, but some things mentioned that it was a copy of an original, which sounds kind of lame until you realize that the mimicked artwork was finished in the 1600s so is still older than most of America's history.

That cracks me up about Europe. When we were in the Seville Cathedral there was a sign mentioning that only two of the towers were original--the others were added later on. In like the year 1500. When I first started reading the sign I thought it was going to say that the others were reconstructed in 1995 or something like that, but no...they aren't original because they were built in 1500 instead of 1400.

Anyway, the museum was nice even after Rachel woke up, although instead of talking about the paintings and artists and styles, Andrew and I started pointing out horses and dogs and babies to keep Rachel occupied. I'm sure glad she wasn't awake for much of the museum because she sure was a handful once she was up!

Me in front of the Prado 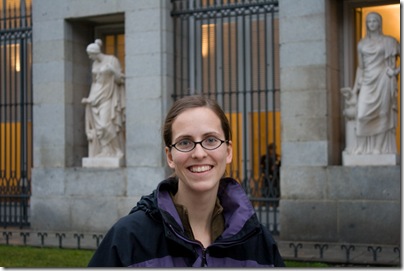 It was pretty much dark when we left the museum but we headed off to see the Royal Palace, anyway. 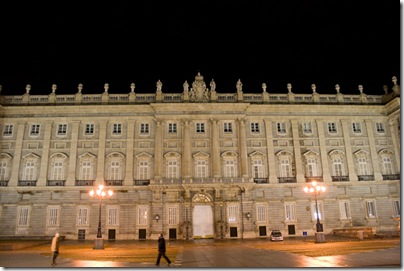 We didn't spend a lot of time there because it was:
A) closed to the public
B) cold
C) nearing Rachel's bedtime.

But we did see the main buildings: the palace, the opera house, and the cathedral, as well as a statue of a horse. We never miss seeing those with Rachel around. 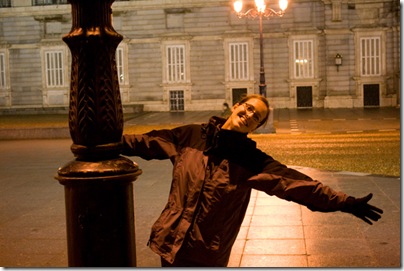 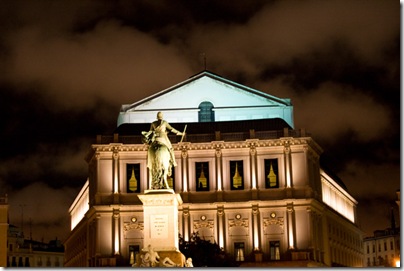 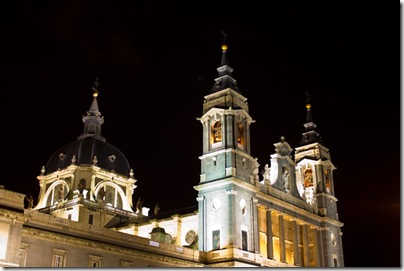 And that's the last we'll see of Europe for a while, I guess. Goodbye clean water. Farewell fresh air. Adios good food. We'll miss everything about Europe...except the high prices!