Just another day in Cordoba

Seeing how we so gracefully missed the morning bus to Madinat Azahara Tuesday morning, and the afternoon bus got back too late for us, our last day in Cordoba was a bit more relaxed than planned. Sometimes it's good to just slow down and have fun instead of racing around trying to get everything done.

First we went to see the synagogue; it was closed when we tried to visit it on Sunday. It's a pretty small building and we were only allowed in the main room. It was used as a synagogue until the Jews were expulsed from Spain in 1492; after that it was used as a house for hydrophobes. Now it's just a tourist attraction.

It only costs 30 cents to get in, but it is free for EU nationals. The guard didn't charge us anything, just waved us inside. Either he figured we were EU nationals or didn't think 60 cents was worth getting off his chair and walking to the front desk.

Rachel had a hard time in the synagogue. It was the first thing we did in the morning. Do you see a theme yet? Let me spell it out for you. Rachel + mornings = grumpy. It's a pretty simple equation.

Andrew asked us to smile for a picture. I smiled, Rachel gave him a wonderful pouty face. That picture, unfortunately, didn't turn out. So with the next picture we both went for pouty. Rachel covered up her mouth. Maybe she was embarrassed? 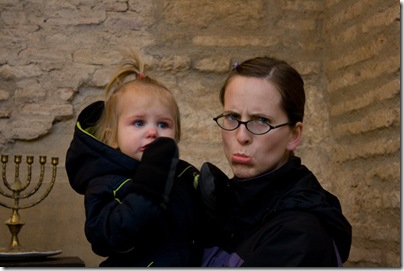 There were inscriptions of scriptures all along the walls. Many of them had been destroyed, but there were several others still intact. 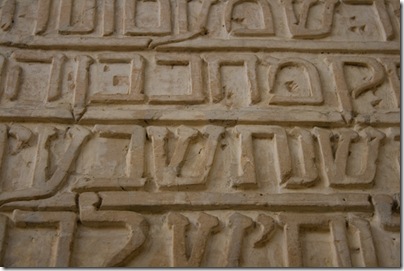 We went to Alcazar after the synagogue. It was great! Rachel loved going up in the towers and looking down on the gardens. She would balance her forehead right on the glass and just stare out the window. 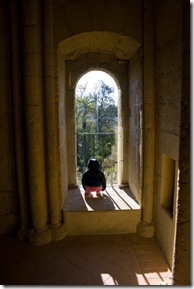 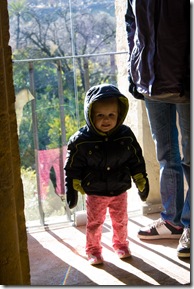 Andrew and I took turns going up into the highest tower because there isn't a very good guardrail, at least not good enough to meet the high standards of an overprotective mother-of-a-dare-devil.

I went up first while Andrew and Rachel played on the castle wall. When I came down to meet them and was almost within arms reach of Rachel, she took off running, aiming directly at a gap between some crenellations.

I grabbed for her but missed. And then I freaked out.

I thought she was going to go over the edge for sure. But, bless those Spaniards and their safety protocol, she didn't. I had failed to see that there were glass barriers between each of the crenellations and assumed there was just open air between them. Apparently I've lived in Egypt far too long. 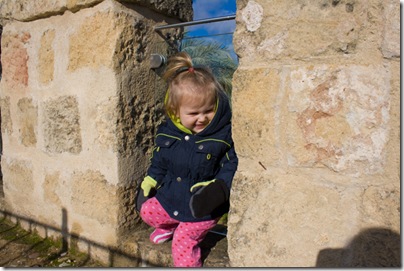 It took me a few minutes to catch my breath. I swear I almost had a heart attack! But, Rachel is still alive and all is well. 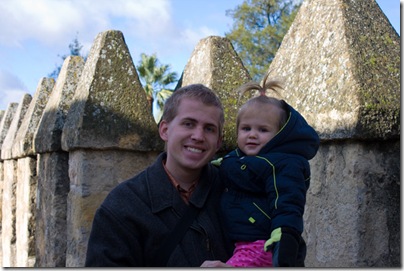 Once I stopped hyperventilating I was actually able to enjoy the view, and quite the view it was, too. Again, maybe it's that I've lived in Egypt too long, but that clear, blue sky just sweeps me off my feet every time I see it! 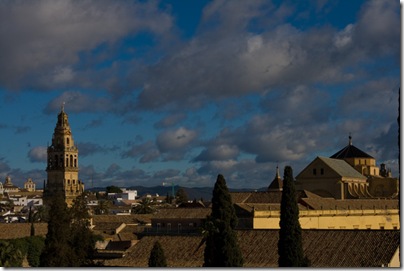 And everything is so green here! Even the roofs grow green stuff! 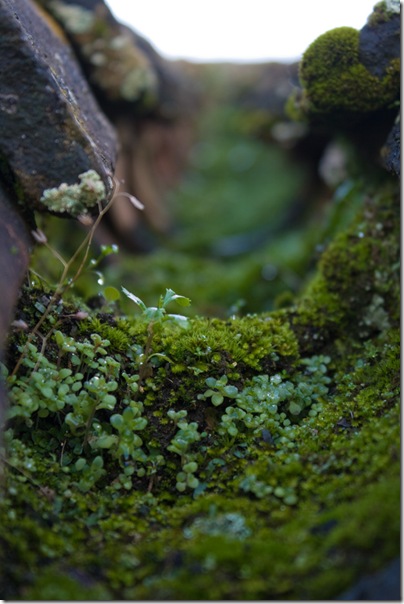 Once off the roof and on firm ground again, Rachel was free to explore. Andrew and I were exploring, too, of course, but we were letting Rachel take the lead in our little expedition. She was mostly looking for statues/pictures/mosaics of horses and even found a few, which she joyously shared with us.

The baths were quite the maze. Rachel had a fun time popping out of doorways at us. She makes the most wonderful faces! 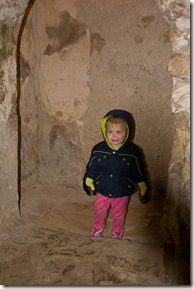 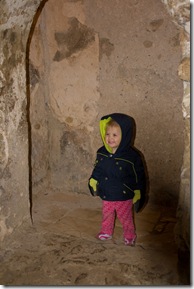 When we had looked over almost every inch of the castle itself, we started on the gardens, which were immense and immaculate! There was a friendly little cat that followed us around for a few minutes. Andrew and I both gave it a good rub down, in turn, and then it wanted some attention from Rachel. She did not want anything to do with it, even though it was a clean, undiseased cat, and obviously very used to people. It kept trying to rub against Rachel's leg, purring up a storm. She screamed and ran away. Just another sign that we've been in Egypt for far too long already! 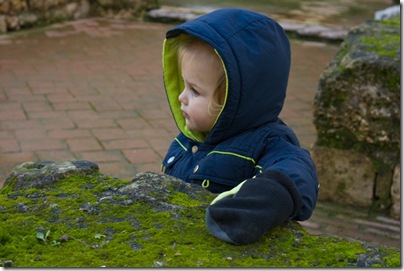 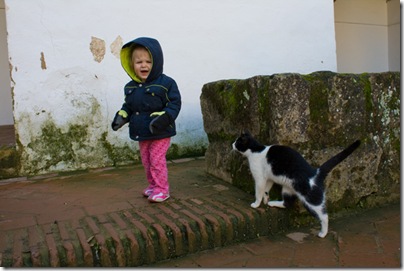 The cat soon gave up on Rachel and went to glean attention from some other tourists. We left to see more of the gardens. Getting from point A to point B looked so simple when we looked down on the gardens from the towers, but once we were actually in them they were rather hard to navigate.

The whole garden is a series of ponds, waterfalls, and fountains. Gravity seems to be what drives the whole setup. It was so amazingly intricate--I can hardly imagine planning a garden like that today with electric pumps, let alone doing it hundreds of years ago. Rachel was really excited to see the fish ponds full of goldfish and catfish. Fish are almost as exciting as horses, if not more so, since fish can't really "get" Rachel and a horse can. Poor Rachel, afraid of so many fun things! She probably will never get a pet horse, and I'm not sure she'll ever go for a cat or a dog, but she might do okay with a bird or a fish...we'll see. 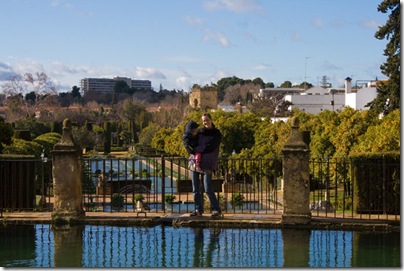 Andrew was having a fun time with the fish, as well. He would spit into the pond and the catfish would race to his loogie and gobble it up. It was quite disgusting to watch. Don't worry, I made him stop. The goldfish, oddly enough, were smart enough to know that it wasn't really food. 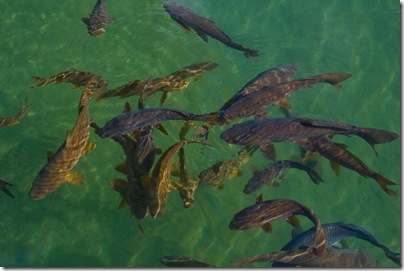 After the fish we wandered off into part of the garden that reminded me a little of The Secret Garden, Alice in Wonderland, and Beauty and the Beast all mixed together. It made Andrew think of Lord of the Rings.

The hedges were all trimmed into shapes--there were even a few small "mazes"--and there were mossy statues of royalty all over the place. Andrew and I decided that we want a garden like this one (as long as it comes with a landscaping crew so we don't actually have to do the work ourselves). 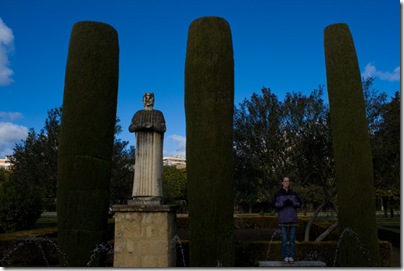 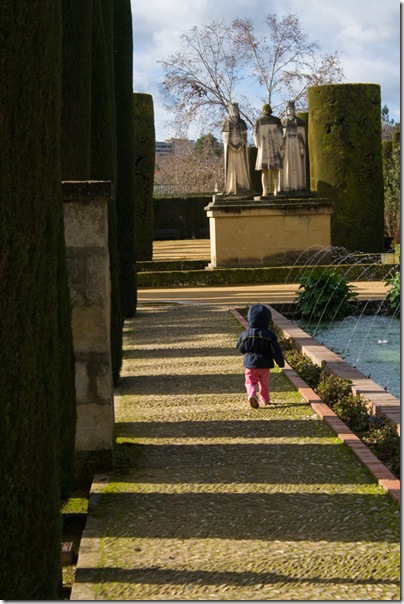 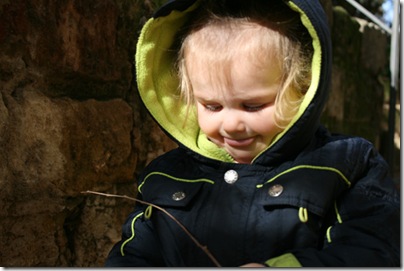 We wandered around the gardens until mid-afternoon, when we decided we should probably get something for lunch. Andrew picked an orange off a tree and put it in his pocket. 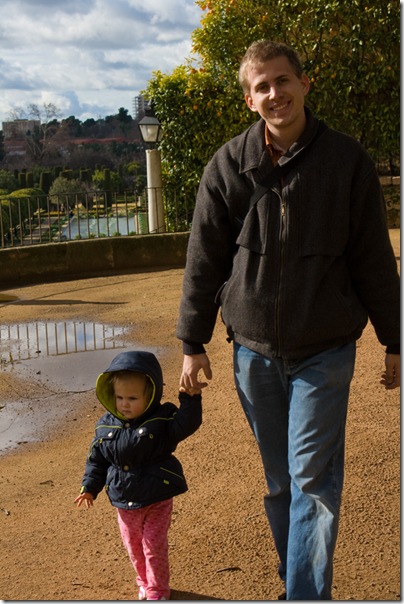 We've been wondering how anyone could go hungry in this country with all the orange trees around. Oranges are so plentiful here they're like manna from heaven. Oddly enough, no one seems to eat them.

We read on Wikipedia that the oranges in Seville are too bitter to eat and so are turned into marmalade and other orangey treats. It didn't say anything about oranges in Cordoba so we figured we'd try one. 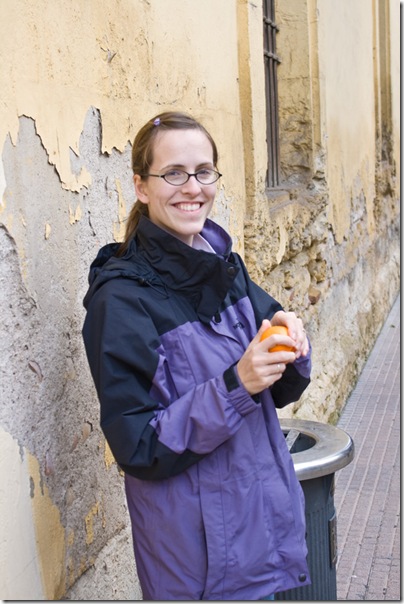 We now know why the locals just kick them around on the ground instead of harvesting them for free produce. The oranges are very bitter, indeed. I usually like sour things, but this was much, much too sour.

It took almost a full liter of water to wash the taste out of our mouths, and when our eyes had finished watering, we headed off to the Puente Romano again. 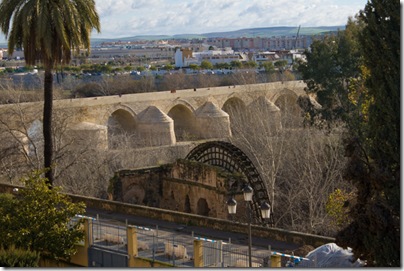 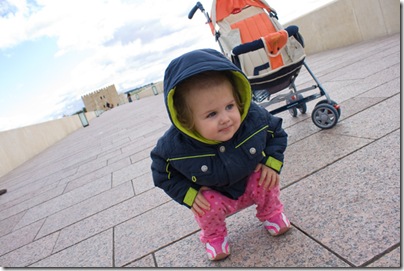 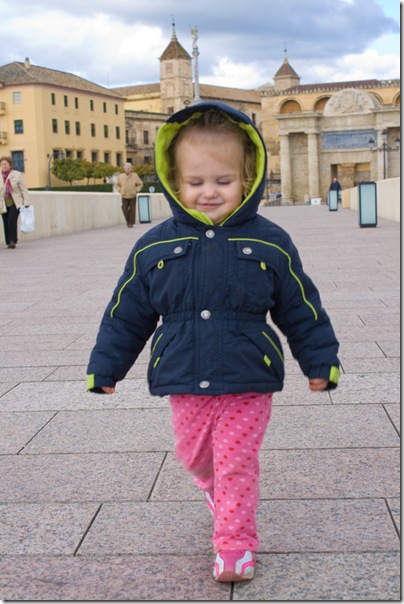 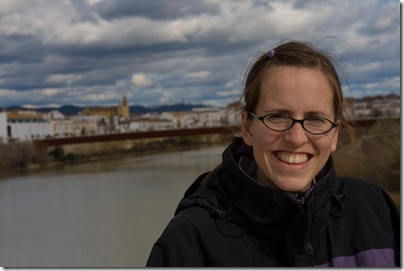 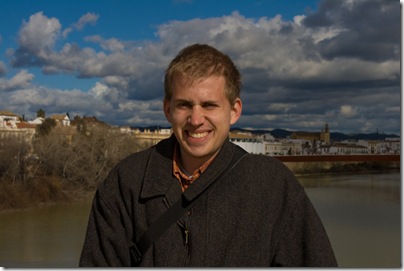 We had been planning on going to a little museum on the other side of the river but got sidetracked when we saw a sign for a grocery store. We've been running low on Rachel-behavior treats, which are absolutely 100% necessary, and have been trying to replenish our supply, but between late openings, siestas, and early closures we hadn't been able to find a grocery store.

So instead of going to the museum we went on the hunt for the Eroski market, and only got sidetracked at a playground for about a half hour before we found it. 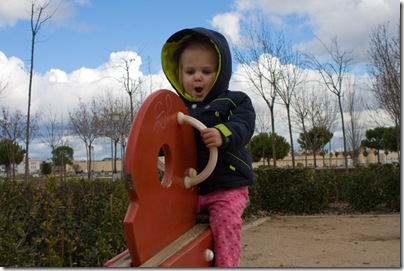 Eroski ended up being in a huge mall complex. It's kind of like Carrefour, only it's not Carrefour or it would have been called that. It's basically your local European Wal-Mart. It has everything from groceries to clothes. Andrew found a fleece jacket on sale for 3 Euro. Just my size. And we found a whole little tub of goldfish crackers for about 1 Euro. Never underestimate the power of a goldfish!

And that was pretty much the end of our day in Cordoba. We walked from the grocery store back to our hostal to retrieve our luggage, then we went off to another park/playground combo to wait until it was time for our train to Granada to leave. Andrew left us playing while he went off in search of dinner, but the doner place he wanted to eat at was closed so we just grabbed some pastries at the station.

The ride to Granada was pleasant. Rachel stayed awake the whole time, of course, which was amazing because she only had a 10 minute nap the whole day...she's just not a sleeper...but at least she was happy the whole time we were on the train.