Uncle David arrived just after 3 AM on New Year's Eve. We ordered a Blue Cab for him so that we could stay home and play games and watch movies together instead of sitting in the smokey airport lounge waiting for him to show up. It was great...even though they charged us 80 LE instead of 55 LE. The little cheaters!
We were excited for him to come, not only because it meant we'd have a visitor, but also because he brought Christmas with him. We enjoyed getting all our presents and treats! Thank you to everyone! 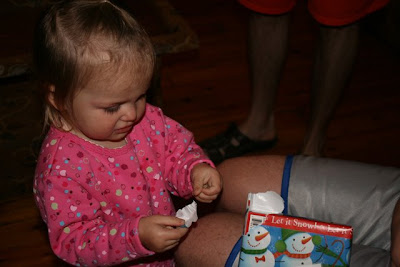 Rachel, although excited about having gifts to open, was less than thrilled to meet Uncle David. 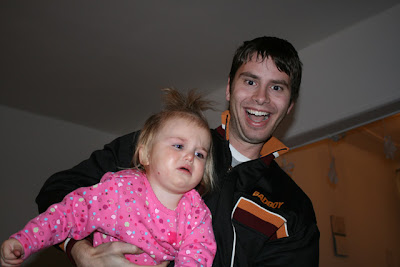 To distract her from his presence we decided to head to Coptic Cairo for the day. Sadly, I don't have much to say about it this time. We've been there so many times that nothing seemed too out of the ordinary. Except that we met some East Indian Mormons from Utah. And the Hanging Church was all decked out for Christmas with balloons and streamers. That's pretty much all though. Oh, and we visited the Coptic Museum for the first time ever. It's well worth it, at least we think so. It's laid out much better than the Egyptian museums with air controls and glass cases and everything.
I'm still not writing much, but here are some pictures. We're in Luxor still and everyone wants me to come and play games. What, like, interact with people away from the computer? What? 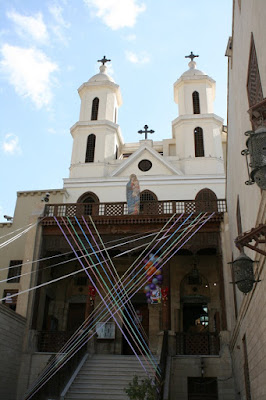 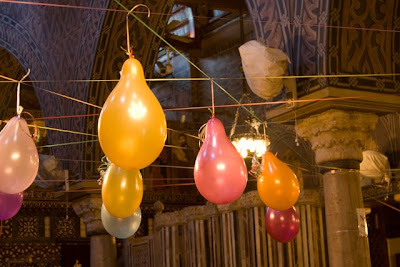 Inside the Hanging Church 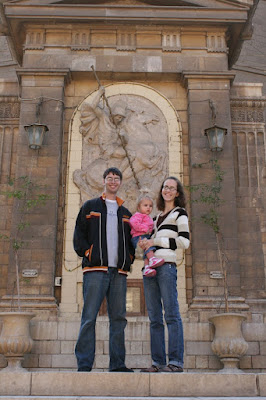 David, Rachel and Me outside of St. George's Church 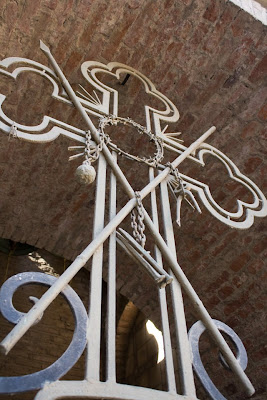 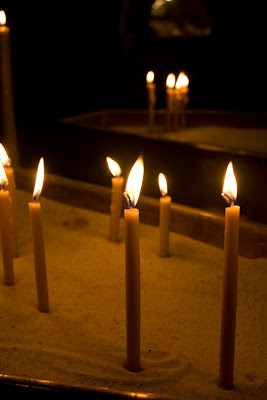 After the Hanging Church and St. George's we went out to the Greek Orthodox Cemetery. That's one of my favorite parts of Coptic Cairo. It's rather peaceful and the crypts and tombs are fascinating. We even found a tomb that had a little house set up inside. How sad that someone actually lives there, in the graveyard, instead of some place warm and homelike. 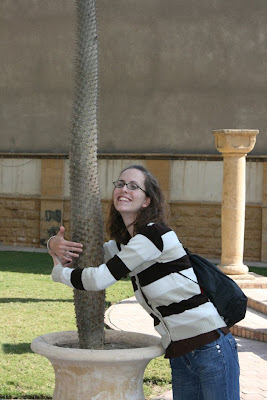 On the path to the cemetary I think these trees are cool 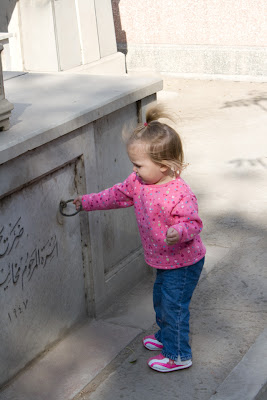 Rachel knocking on a tomb 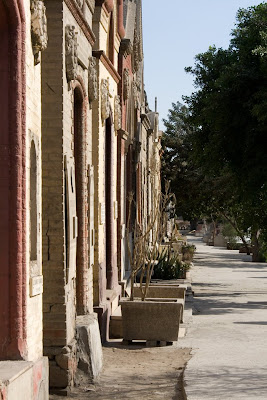 These crypts look like little townhouses, don't you think? 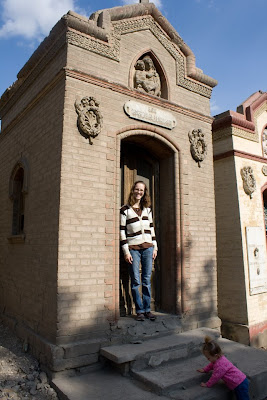 This one is rather crooked 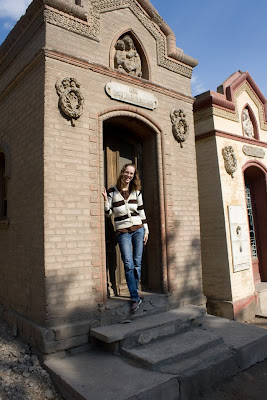 It's pretty much my favorite 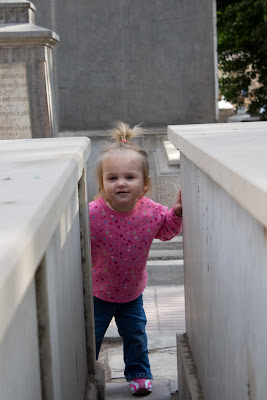 Rachel enjoyed a game of peek-a-boo with Andrew 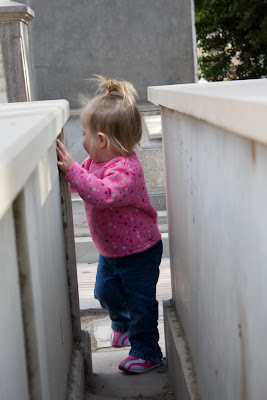 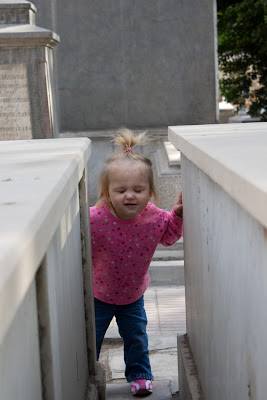 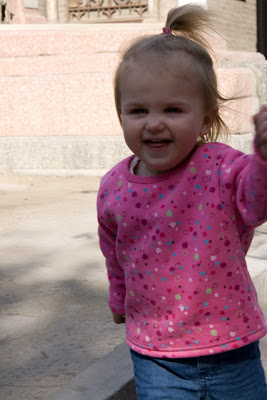 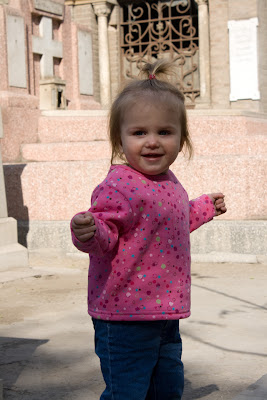 We spent a long time in the graveyard 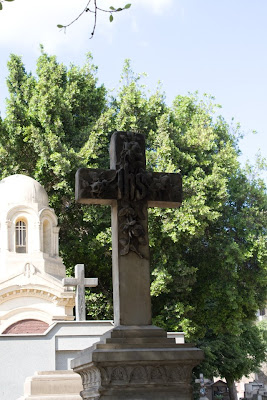 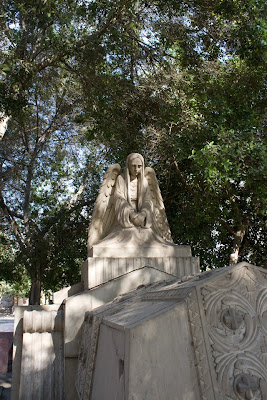 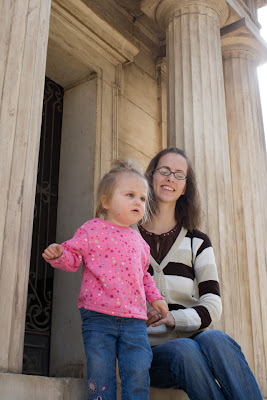 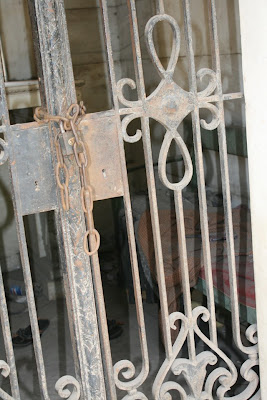 Someone lives in here 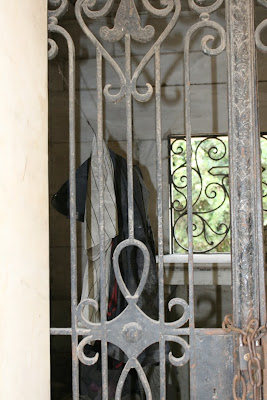 And then we visited a church that isn't on the map in our guidebook but that apparently has the crypt that the Holy Family hid in during their stay in Egypt. There are two such crypts in the Coptic Cairo complex. We are not sure which one to believe. Maybe they stayed both places. Maybe they stayed at neither.

Poor Rachel was so exhausted! She's still sick (we both are, actually) so she was trying to be cheerful and fun to be around, but really she just felt icky. I love these pictures--the first is her trying to look happy and cute and the second is how she looked for most of the day. Just ugh. 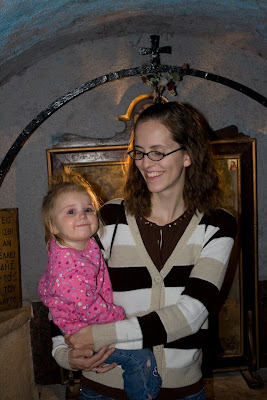 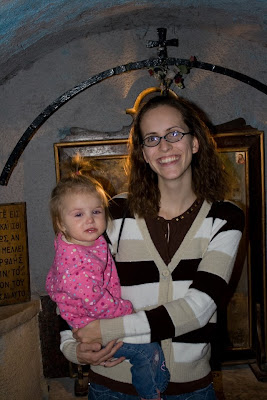 And I'll leave you with a few pictures of the mystery church we always go to. One day we'll learn more about it. One day I'll actually tell you a few more stories. But not today. The internet here stinks, although we're grateful for the connection we have, and everyone is still on my case about being a real person. So I'm off to play cards. Gotta please the crowd. 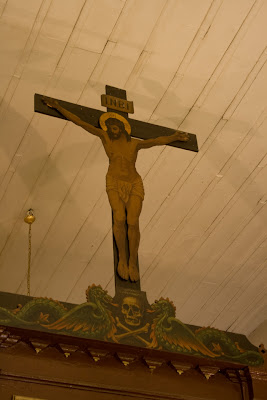 What's with the skull and crossbones? 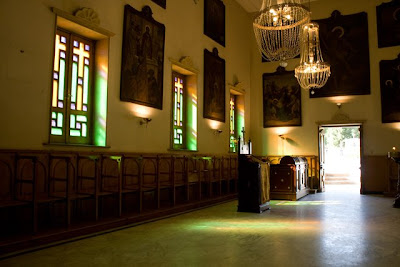