There is no such thing as "garbage day" in Cairo. You know, the day when you take the garbage can out to the curb and the truck comes by to pick it up? It goes to a dump or an incinerator and you never see it again. That doesn't happen here.
We put our garbage in the hall and our bowab comes by and does...something...with it.
We're not really sure what happens to it, but are pretty sure it is just added to the piles of trash on the streets. Those piles of trash are then sporadically sorted through and picked up by the zabbaleen.
The zabbaleen live not too far from the Citadel in the Moqattam Hills in an area nicknamed "Garbage City." Once you visit Manshiyat naser it becomes perfectly clear how it earned this nickname.
Garbage floods the streets. The houses are full of garbage. We saw one house full of organic waste: orange peels, banana peels, rotting meat, egg shells. The women inside the house had shovels and were combing through the knee-deep sludge looking for reusable goods. Children and babies sat by their feet and played in the refuse. We saw gasoline cans stacked up several stories, racks of mismatched and newly repaired shoes, stacks of soiled and torn clothing, donkey carts pulling loads of cardboard, children sorting out empty water bottles, and piles of garbage bags yet to be sorted.
The smell was incredible.
Although I think it is neat that they find some many things to reuse I do not envy their position. Their faces are completely lifeless as they sift through our garbage, as their parents and grandparents did before them. What a life. 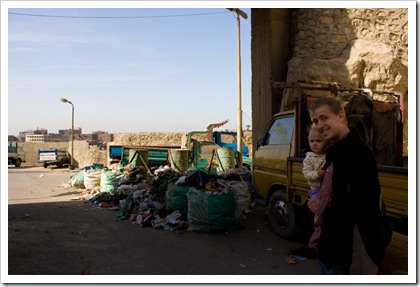 Truthfully, it reminds me of the Junkyard in Labyrinth. That movie always scared me, and Garbage City scares me a little, too.
In fact, most taxi drivers will not take you to Garbage City unless you ask to go to the St. Sama'an Eldabbagh Church, an amazing church built right into a cave in the hills. It is a huge amphitheater and apparently has seating for 20000 people! 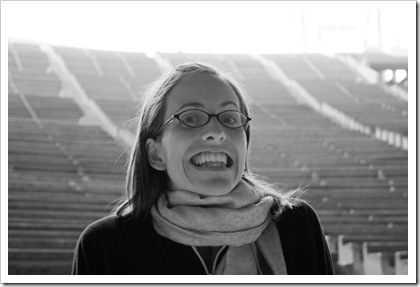 The only way to get to it is to make your way through Garbage City. 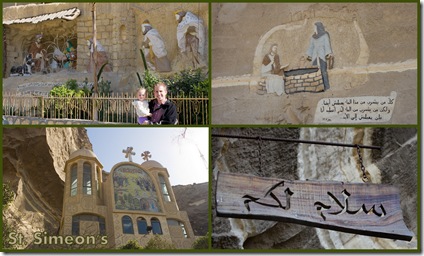 Once you are there it is hard to believe all the filth you just came through. St. Simeon's is beautiful. The walls of the cave/hill are covered in reliefs of scripture stories, the gardens are well-kept and very clean. It's quite the contrast to the stark poverty of the neighbourhood that surrounds it.
After looking at St. Simeon's we opted to leave Garbage City and head to Al-Azhar Park. It was our first time in Garbage City, it was our taxi driver's first time in Garbage City and none of us really knew what else there was to do there.
Emad said he'll take us back there sometime. He knows of an orphanage we can visit, as well as some shops where they make crafts of recyclables (Josie and Emily, your purses were made by the Zabbaleen; we bought them at a store in Maadi). Unfortunately we didn't know that there was anything cool to see in Garbage City, besides St. Simeon's. And garbage.
So off to Al-Azhar Park we went to pay our 5 LE in order to enter the beautiful park. It's a short drive to there from Garbage City. In fact, it's probably within walking distance, if you happened to want to walk through all that garbage to get out of Manshiya naser.
It's really kind of guilt-inflicting to think that while we were basking in suburban utopia, the zabbaleen were still shoveling their garbage. We can see their hovel from the hills of Al-Azhar Park. Behind the beautiful fountain is David. Behind him is more park. Just across the street? Trash, trash, and more trash. 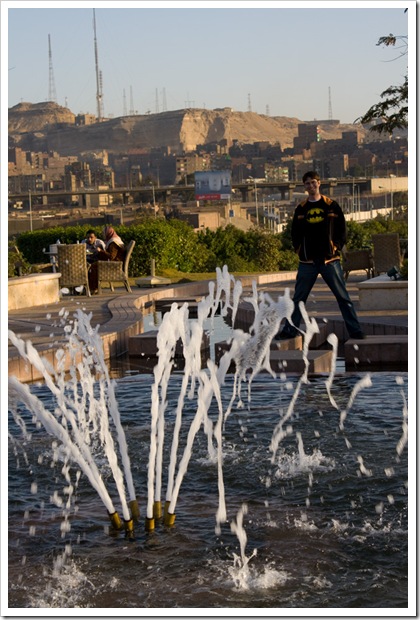 As you can tell, I'm still getting over how much garbage I saw in Garbage City. I'm still amazed I was able to put it all behind me and have a good time at the park. Truthfully, I did feel a little guilty enjoying myself so fully after witnessing the zabbaleen lifestyle. The irony of it all is that Al-Azhar Park is built on an ancient garbage dump.

Rachel, on the other hand, had no problem getting over Garbage City and was excited to play at the playground again! It's been such a long time since we've gone to the playground. Playgroup kind of died off during the winter break, so Rachel hasn't been to the playground since we babysat the Lewises at the beginning of last month. That's a long time for a little baby! 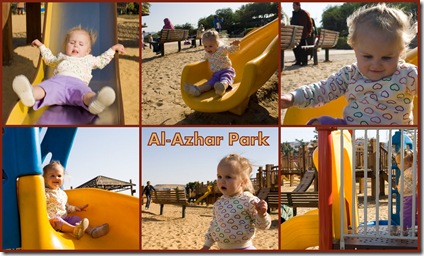 She had such a blast in the Children's Area. She probably played for about an hour, all by herself--going up the stairs and down the slide, up some more stairs and down a different slide. She went through tunnels, which she used to be afraid of, and followed some bigger kids around, taking turns and everything. There is so much that she can do without help now, it's really amazing to just be able to sit on a bench and watch her play nicely!
I would have been able to relax, even, if Rachel wasn't such a little dare devil! She would put her hands up in the air--you know, like she was riding a roller coaster--when she was going down the slide so that she wouldn't touch the sides and she would walk up the stair without holding onto the railing. She was making me so nervous!
When we were all but starving, we ordered some pizza from a kiosk in the park and walked over to the lake for an impromptu picnic. We played tag and leap frog, turned cartwheels and spun in circles. It was really fun!
While we were playing a chasing game, I accidentally taught Rachel how to say, "Neener, neener, neener!" I'm sure she would have added, "You can't catch me!" if she could talk better. I was making antlers at the side of my head by putting my thumbs on my temples and extending all my fingers (kind of like this). Then I would stick out my tongue and twist my hands before singing, "Neener, neener, neener! You can't catch me!" And then I'd run away from her.
Well, after doing that to her a time or two she decided to copy me. She stuck her index fingers in her ears and twisted them around, singing, "Nana, nana, nana!" She kept twisting and singing and twisting and singing. Then she stopped singing, twisted her finger a little more, wiggled it around, twisted it again and pulled out a big gob of ear wax. Quite hilarious. 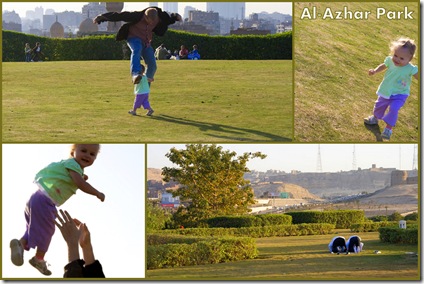 After all that running around, we were all pretty thirsty. It was almost sunset and, since we hadn't been planning on staying at the park for quite that long, we were all incredibly thirsty. We had only brought one small (600 ml) water bottle with us, which isn't enough to keep 4 people hydrated for hours on end, so we went to another kiosk to buy some more water.
David even bought his own bottle, speaking Arabic the whole time!
After we had our water we walked up the hill to a lookout point to watch the sunset. Andrew taught Rachel how to roll down the hill, which they did over and over again and got completely covered in grass! 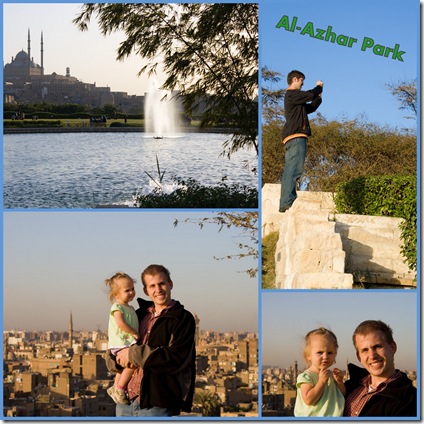 The weather was perfect--not too hot and not too cold; all we needed was a light jacket. For a while we all opted to go completely jacket-less, but while we were watching the sun set things got a little chillier. Rachel held out without her sweater the longest, but eventually we tackled her to the ground and forced her back into it. 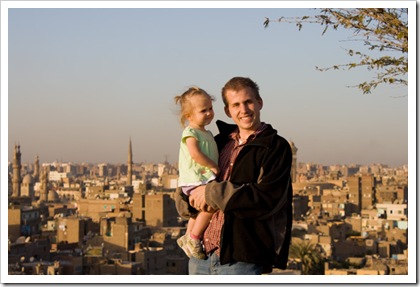 It really almost felt like spring. The air had that lovely springy feel in it; still chilly, but like the "warming up" side of chilly rather than the "cooling down" side. Yes, our Saturday afternoon at Al-Azhar park was the perfect counterpart to Garbage City. Peaceful, clean, warm, and quiet. It's one of our favorite places in the whole city!
Posted by Nancy at 8:43 AM