Not in Toronto, day 1

I'm completely worn out! Andrew left for the airport around 5:30 this morning. Benjamin got me up a little before 7:00 and then we got Rachel up. We got her off to the school bus and then it was just Benjamin, Miriam, and me for most of the morning.

Miriam's little friends Alden and Marcella came over to play while my friend Marian took Baby Jay to a doctor appointment. Those three play so nicely together, though they don't like Benjamin to butt in, which makes him a little sad. When Marian came to pick up the kids they were all so happy that we let them keep running around in the backyard while we chatted and Baby Jay napped.

Benjamin was so excited when Baby Jay woke up. He still doesn't say much but he can say, "BABY JAY!" as clear as a bell.

Unfortunately, with Baby Jay once again awake Marian wanted to take off to get things done at home. Marian's kids were terribly upset by this and came up with the plan that Miriam should come home with them, so that's what we did. Benjamin was completely convinced he was going to tag along as well so that he could continue admiring Baby Jay. He climbed into Marian's van and nestled in between Miriam's and Alden's carseats in the very back.


It took both Marian and I to pull him out of the backseat (each of us reaching over a child-in-car-seat to grab one of his arms). He cried all the way to the school. "Baby Jay! Baby Jay!" he bellowed (when he wasn't plain ol' screaming his lungs out). By the time we arrived at school his entire face was covered with a snot/slobber mixture. But he calmed down when he realized where we were (because apparently the dozen times I told him where we were headed didn't ever sink in (it's hard to listen when you're screaming nonstop)).

Rachel's class is working on a huge project Thursday afternoons and I committed to help. I've been leaving Benjamin napping the past couple of weeks and everyone kept asking where he was. This time I showed up with Benjamin and Miriam didn't come and all the kids wanted to know where she was. If only they understood that it's easier for me to actually help when I'm not tearing myself apart trying to keep track of two underage, non-on-task children.

After school Rachel's friend Callin came home with us. His parents were out of town and had his grandma babysitting him but she had to fly out early so I took Callin. He's a little more rough'n'tumble than we're used to at our house so even though we had a lot of fun with him I was grateful his brothers were farmed out elsewhere.

When he saw our tadpoles he exclaimed, "You have tadpoles! No fair!"

Rachel retorted, "No fair? Ummm...you have a dog!"

He wanted us to show him where we found them and the girls thought that was a marvelous idea, so we went for a lovely walk in the woods.

This picture is blurry but it was right after I'd set Benjamin down to walk on his own (he was in the front carrier until this point) and he was so excited to be free that he took off running to catch up with the other kids. I was going to take a picture of him racing after them but then he stopped dead in his tracks, turned around and said, "Wanna han'!" He decided that he wanted to hold my hand instead of catching up with the big kids. Melt my heart. 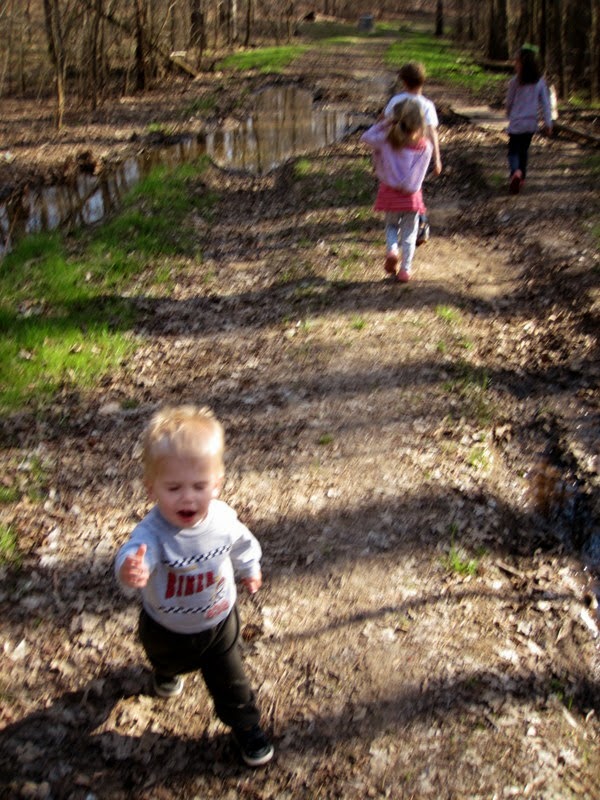 He didn't have much catching up to do, anyway, because the kids were stopping at every puddle they came across to look for tadpoles. Benjamin was anxious to keep things moving...

He led them across this little bridge: 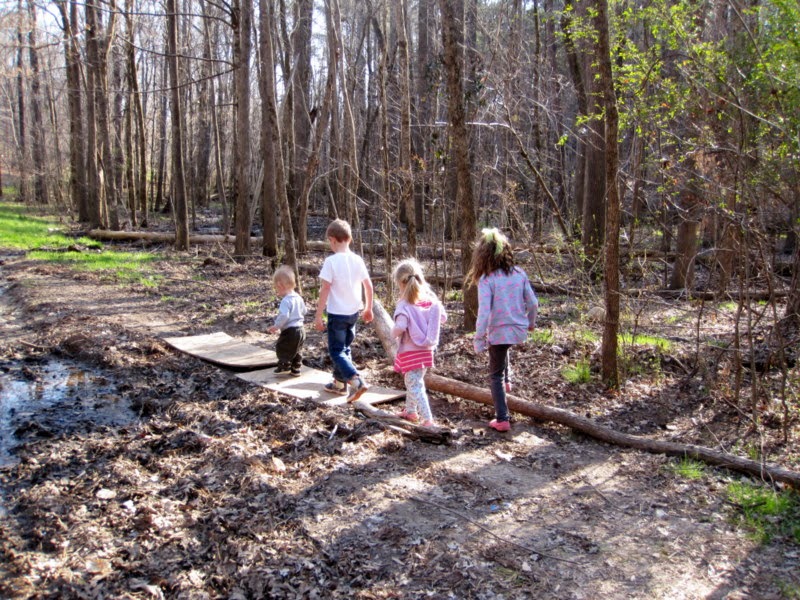 They were patient enough to let him keep the lead the whole way across the bridge, but I think that's the only time he was the leader. The rest of the time he was desperately trying to keep up (and alternatively taking his time while strolling hand in hand with me). 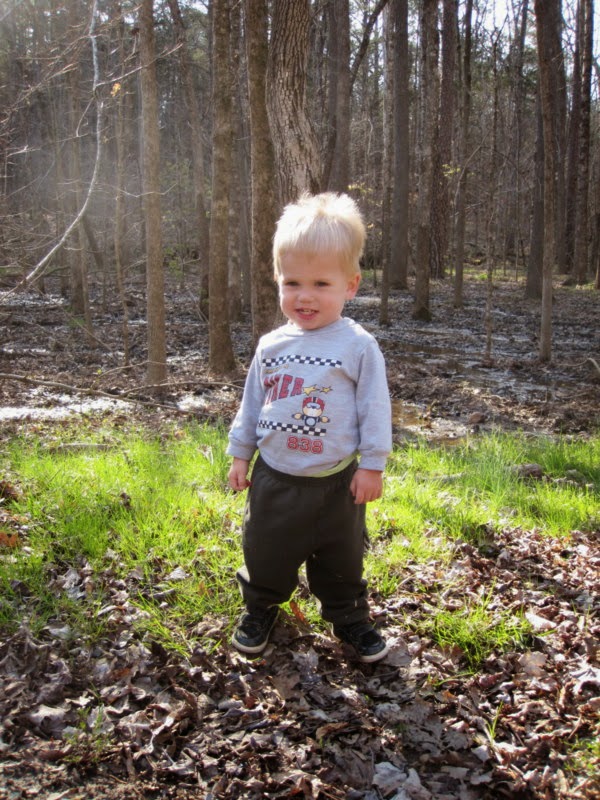 Rachel prides herself in being a bit tom-boyish and was happy to have someone to play with who matched her sense of adventure. I could hardly keep those two in sight. I had to keep yelling for them to "only go as far as the [insert landmark]." Even then they missed the bridge by like a mile (okay—maybe only a quarter of a mile, but still). 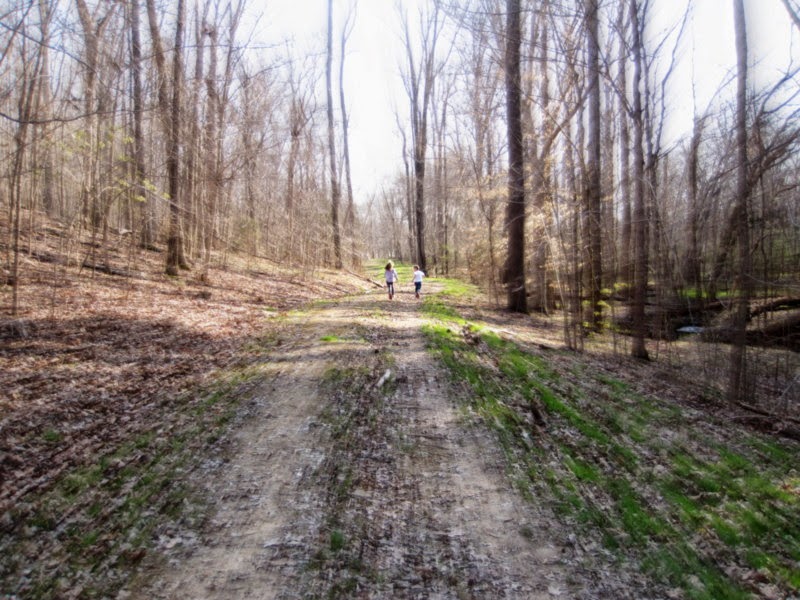 They found the very puddle we found our frogspawn in (and each puddle was thoroughly vetted). It's still wet—but just barely—and it was the only puddle that we saw tadpoles swimming around in. Lucky for them they live in North Carolina and it's due to rain all day tomorrow. If they lived anywhere more arid they might be seeing the last of their days. 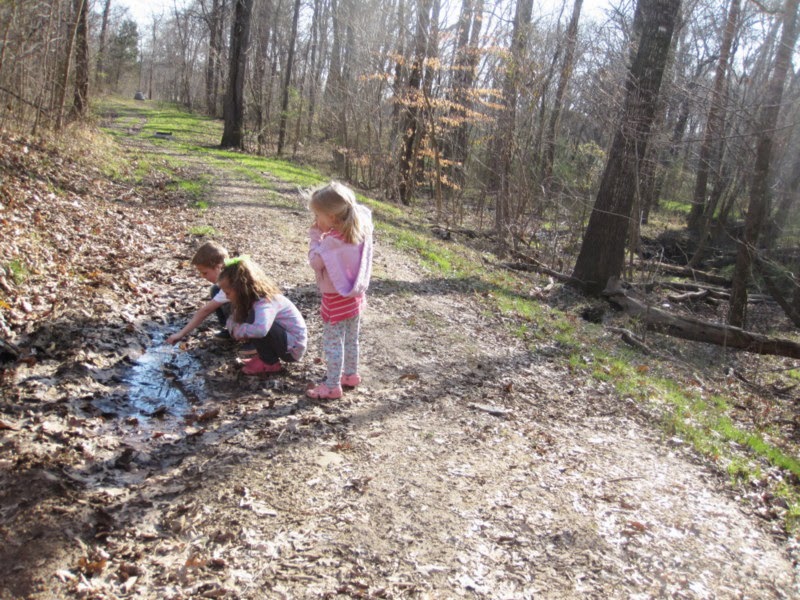 This picture is so great. 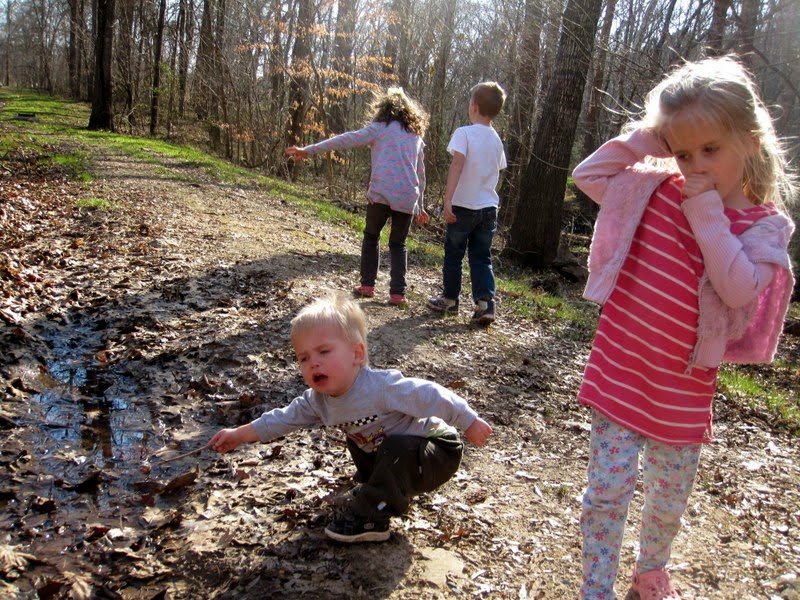 I love how Rachel and Callin have moved on (they had been admiring the tads for so long that they were boring by the time we caught up). I love how Miriam is sucking her thumb and pulling her ear (it's possible she will never grow out of that). I love how Benjamin is so frustrated that his stick isn't quite long enough to splash in the water.

Miriam found a snail shell on the trail. She wanted to take it home to put in the "rock museum" under our deck (there are exhibits of various types of rocks the girls have classified and someone even attempted to write museum on the foundation in gigantic kid-sized letters (only they wrote something like MOUSEUM)) so she put it in her pocket for safe-keeping. 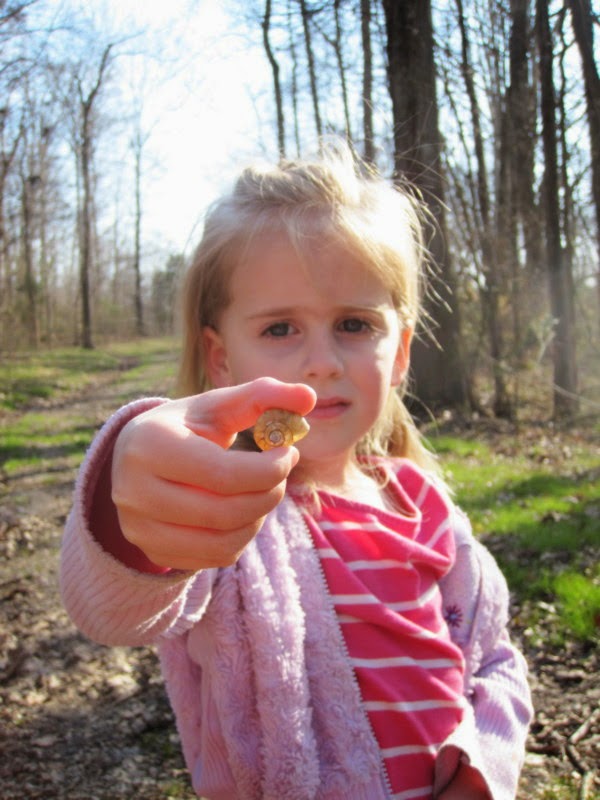 You should have seen the tears she produced when her pockets turned out empty when we got home.

This little guy tripped and did a fabulous face-plant on the trail. He cried for a minute and then we brushed him off—all except that little particle of something stuck in his nostril. Oops. 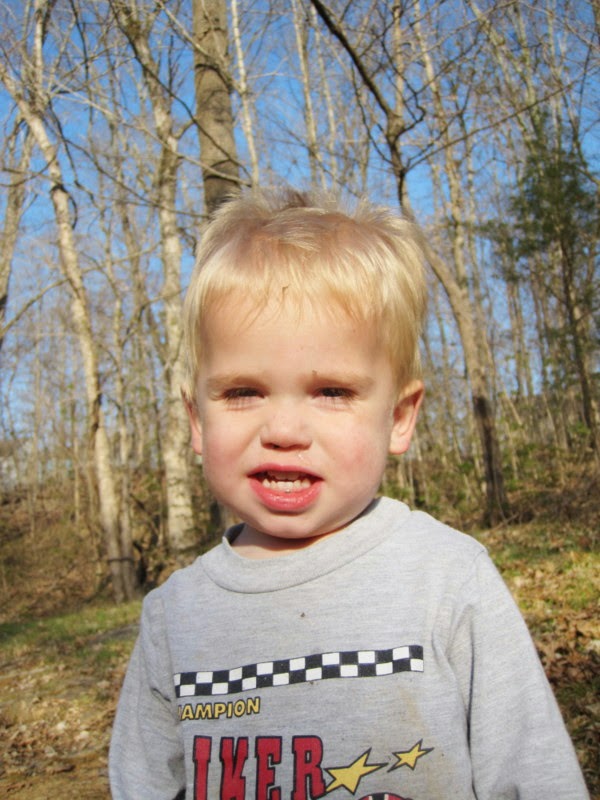 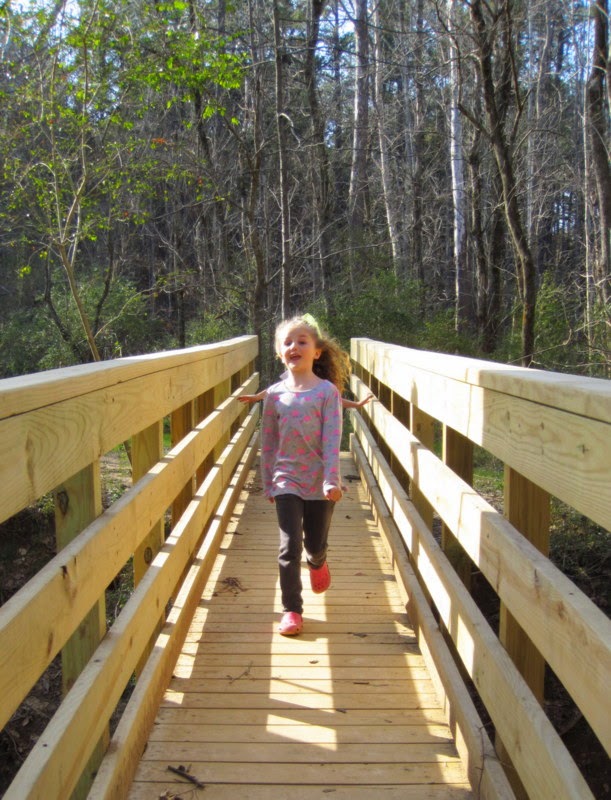 This was moments after she said, "Oh, that bridge. We didn't see it!" Because I can totally see how it would be hard to miss.

Benjamin fell in love with this bridge on a level I didn't expect. I'm not sure we've ever let him down while hiking. He's usually stuck in a carrier or some sort or other so that we can keep up with the other kids. I'm not sure he's walked across an actual bridge (though he has crossed several playground bridges). This was a real bridge over a real ravine. 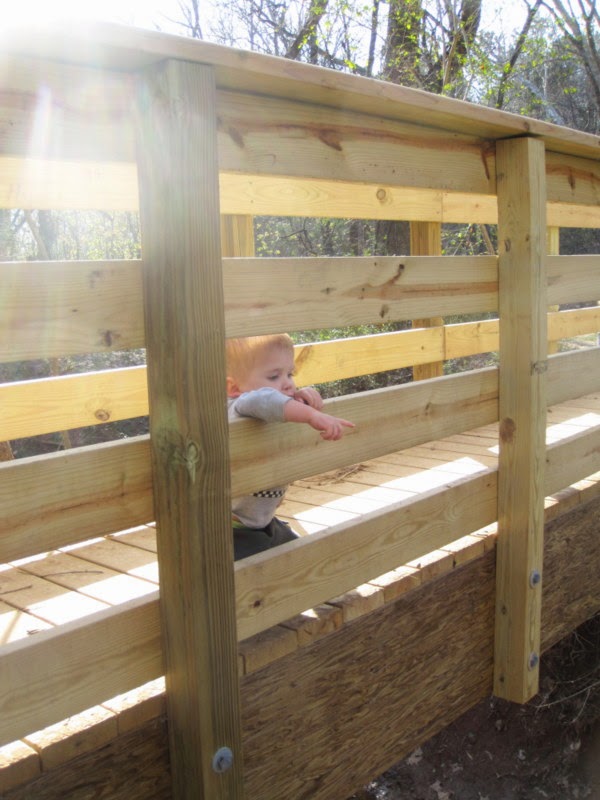 It was so awesome that Benjamin decided to learn a new word in honour of it: bidge. 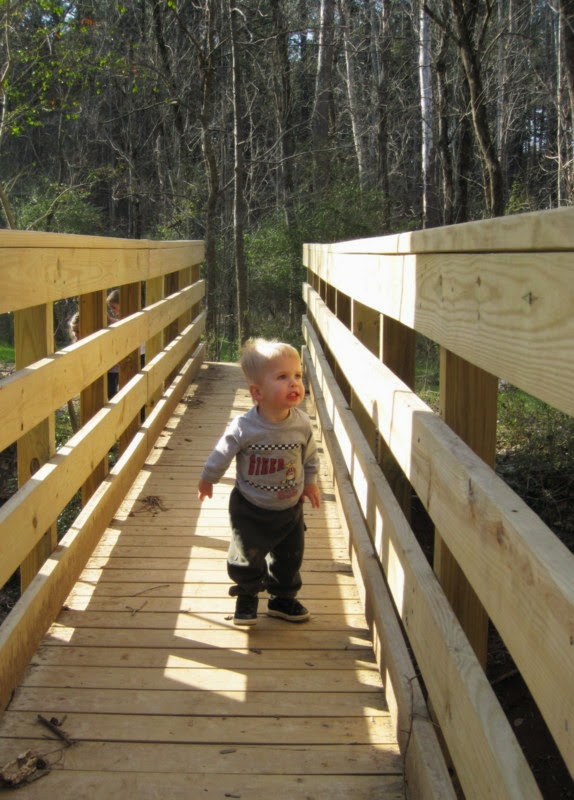 "Bidge, bidge, bidge, bidge!" he sang the whole length of the bridge and when he got back to my end he hollered, "MOOOOOOM!" as if to say, "You cannot believe how awesome this is!"

He was so excited he could hardly contain himself. I mean, what is up with those eyebrows?

I made Rachel slow down for a few pictures because she was so cute today. I braided her hair on Tuesday night and she wore it braided to school on Wednesday. We took out the braids this morning and she was so self-conscious of her wavy locks. She begged me to put it into a ponytail—or even a bun—but I convinced her to leave it half down. 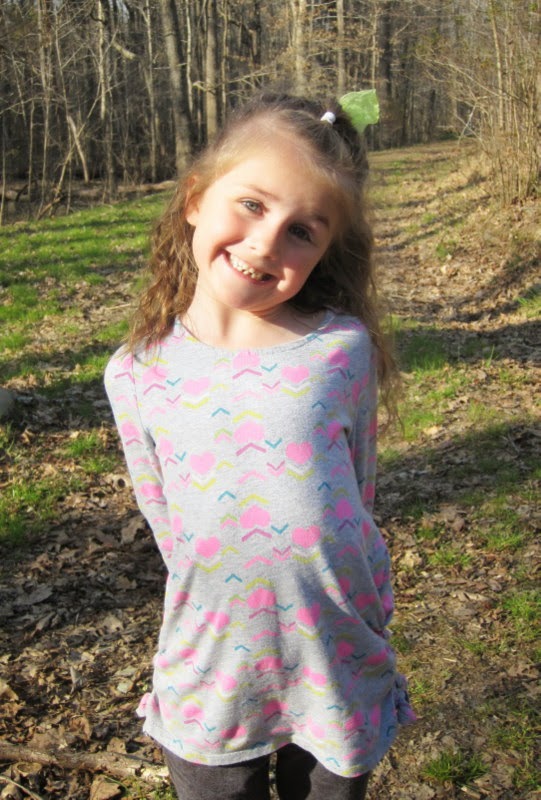 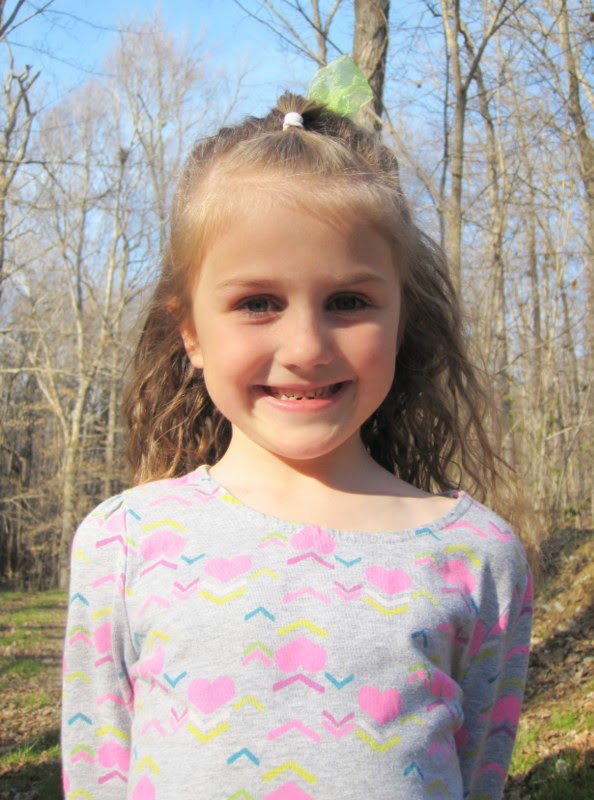 Well, guess who came skipping up to me at school today? Eliza did. And she had wavy post-braid hair up in a half ponytail.

"It's funny that both Rachel and I have the same hair today!" she grinned.

"I braided Rachel's, too, and when she took it out this morning she was shocked by how pouffy it was and didn't want to go to school with her hair that big. But I told her, 'Eliza wears her hair like this all the time and it's super cute!' so she had nothing to worry about." 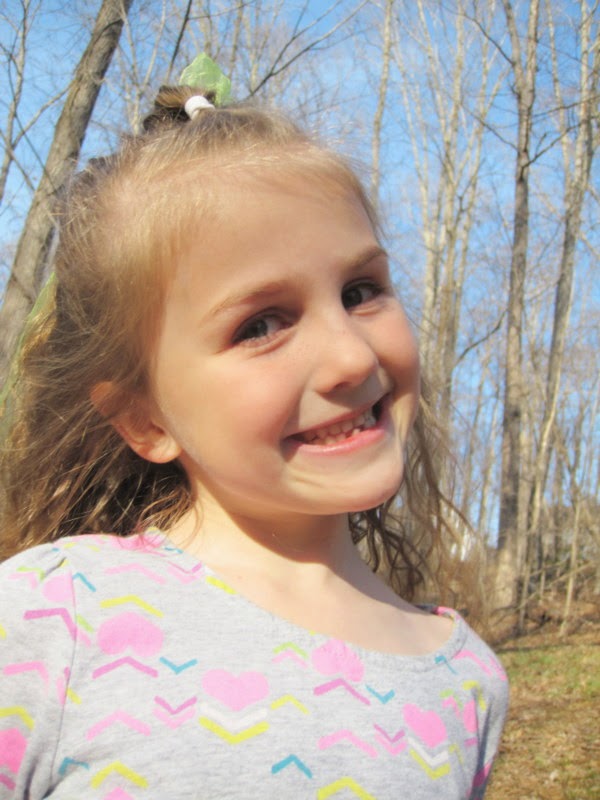 Now Rachel wants me to braid her hair more often so she can match Eliza. Her hair was a little too short to put into braids after I cut it the last time but it's grown enough that I can again. And she looked adorable (as always).

There aren't many pictures of Miriam because she was too busy sucking her thumb to pose for pictures and when I did convince her to try all I could get was a sour look from her. I think she was feeling a little bitter about being left behind with Benjamin. She wanted to tag along with Rachel and Callin but just couldn't keep up.

Here she is nearly yanking Benjamin's arm out of his socket, trying to get him to hurry up: 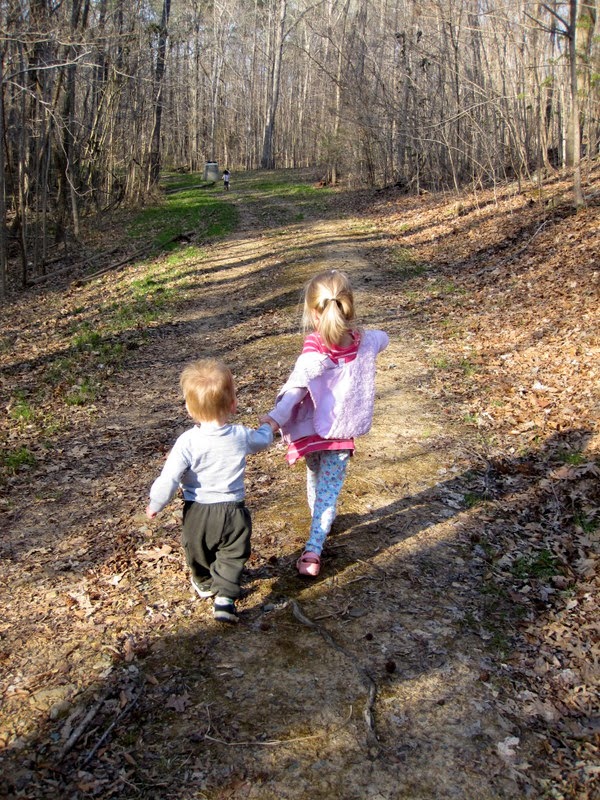 She was so torn between wanting to be with the big kids but knowing that if she set off after them she'd end up walking alone at her medium-sized speed so she forced herself to stay with me and Benjamin because even though it made her grumpy it made her feel more comfortable than walking alone. Such a conundrum for a four-year-old. 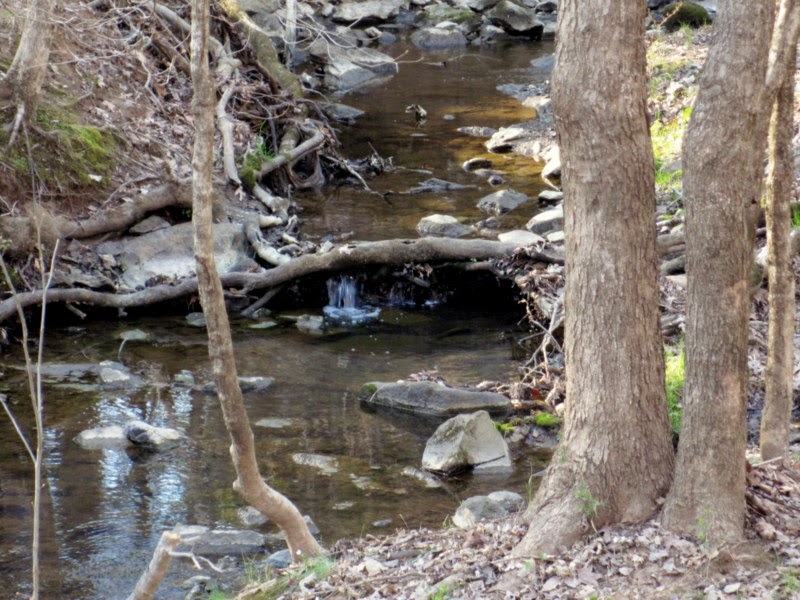 She was always very happy when Rachel and Callin stopped to investigate some water feature or another so that she could make a mad dash to catch up with them, brave enough to leave me when she knows her goal is standing still (rather than getting farther and farther away). 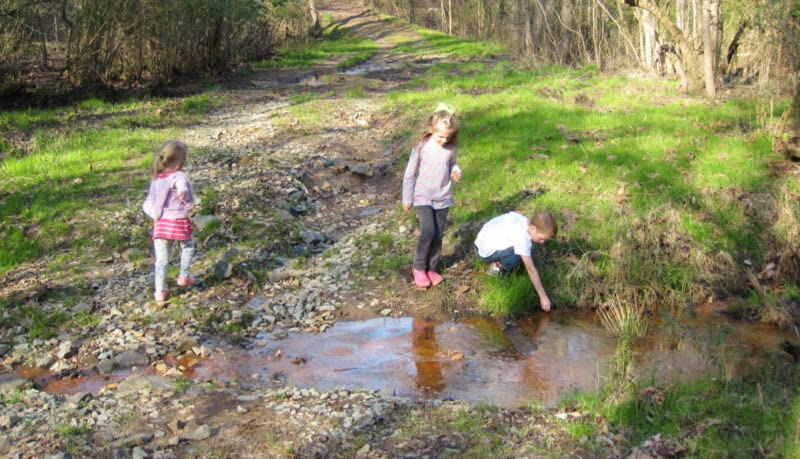 They thought this water was frozen. It's not. That's all nasty oil floating on top. It's the most putrid puddle we came across. Stagnant. Polluted. Nasty. Scummy. Gross.

Benjamin decided he wanted to throw a rock in it. Side note: I hate it when my camera focuses on the background rather than my actual subject. 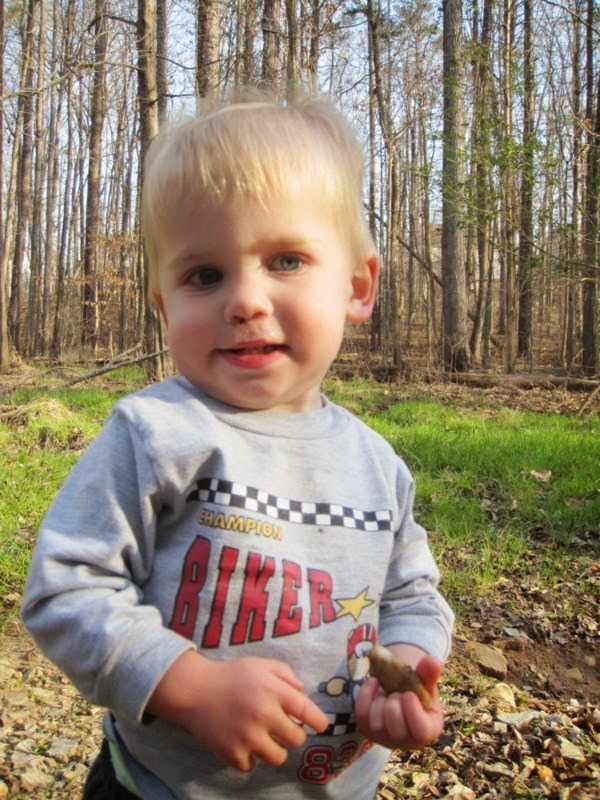 I directed him to a nicer-looking puddle because being splashed by nasty water isn't one of my favourite things to do. While we were tossing rocks, Rachel and Callin discovered this log that was balanced on a fulcrum like a seesaw and had a grand old time bouncing each other up and down. Miriam, by the way, is just discovering her pocket is void of that snail shell... 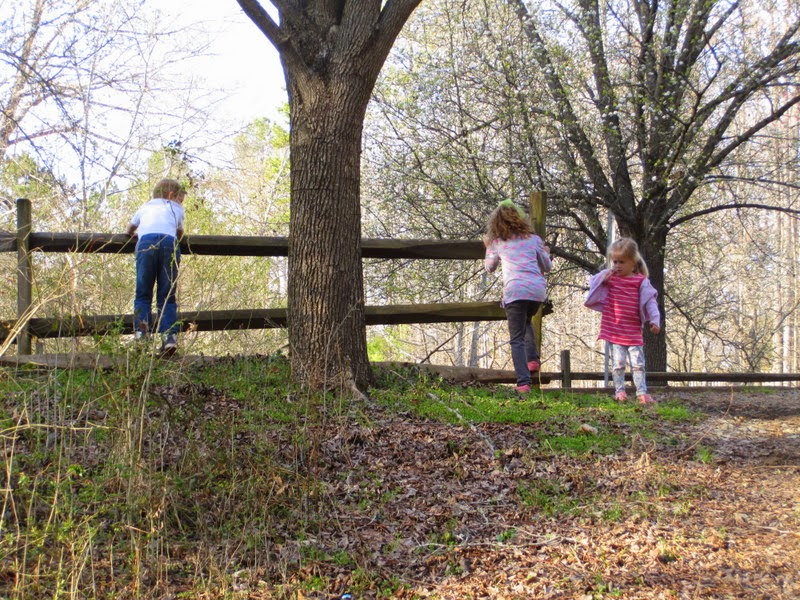 ...so there are no more pictures because I had to console her the whole way home.

Callin and Rachel both ended up with slivers. Go figure. Rachel sucked hers out after dinner (she wasn't letting me anywhere near her with an implement of death tweezers).

We collected some algae while we were out so we could put it in with our tadpoles. I cannot figure out what they eat. The darn internet isn't conclusive. Some sites say blanched lettuce, others say fish flakes, others say algae, others say they just suck in water and take nutrients from that. I'm going to guess that mine are of the latter variety.

They haven't touched the lettuce, I'm not going to try fish flakes, and they were doing just fine before we plopped the algae in with them. They're growing and pooping so I guess they're doing okay. And I must say, I'm pretty good at maintaining a decent stagnant-puddle environment.

In addition to all that I managed to get some laundry done and start a number of projects that I didn't come close to finishing, like organizing our closet. Good thing Andrew's not here so I can pile everything that's sitting on the bed onto his desk!
Posted by Nancy at 8:46 PM